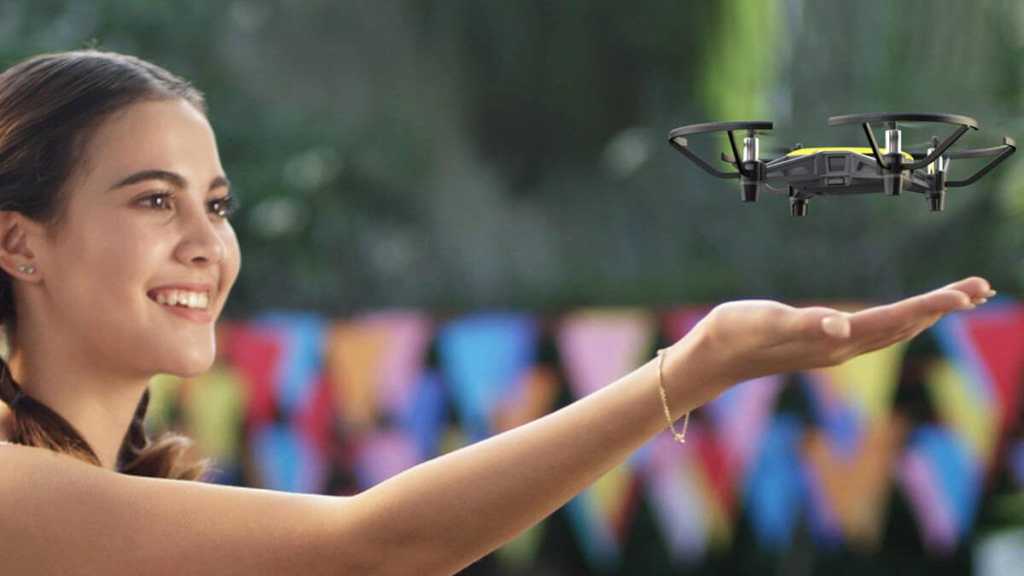 Not everyone is prepared to spend hundreds on a drone from DJI or one of its rivals. And these days you have to register everything except for the lightweight DJI Mavic Mini.

Compared to those expensive drones which can cost hundreds of pounds, cheap ones tend not to have auto-hover, no automatic flying and only basic stabilisation from an on-board gyroscope. This means they’re harder to fly, but there are exceptions, such as the Ryze Tello. Another exception is the Micro Drone 4.0. You can find more details on the Micro Drone 4.0 Indiegogo page (but note that you cannot ‘buy’ one there – paying for a perk is simply adding to the crowdfunding project and doesn’t guarantee you will receive one).

Cheap drones are a lot of fun, but flying time is usually limited to a few minutes, so budget for a few extra batteries, unless the model you choose doesn’t have a removable battery.

When a drone does have a removable battery these are usually cheap and readily available. Just make sure you get the correct type. Then the battery is fixed inside, you typically have to charge them for around 45 minutes after each five-minute flight.

Crash packs are available for many toy drones, too, and it’s well worth getting one, if not just a couple of sets of extra propellers as you will break those that come in the box. Don’t forget that they’re not all the same: one pair rotates clockwise, the other pair anti-clockwise.

Finally, remember that the UK Dronecode applies to these just as much as bigger more expensive drones. If you’re in the US, you only have to register your drone with the FAA if it weighs over 250g.

It’s the same in the UK, but all of the drones here are lighter than that threshold.

If you’re looking for a drone for top quality aerial photos and videos, check out our roundup of the best drones.

One of the smallest drones we’ve ever seen at 28mm across, the Proto Quad can be stored on the controller itself. It has a six-axis gyro, three speed levels (so you can start off at low speeds to avoid crashes) and the ability to perform flips. Because it’s so tiny, it’s harder to fly than larger models, but it has a big wow factor.

The battery can only be charged inside the drone, so you can’t buy spares and quickly swap them out. 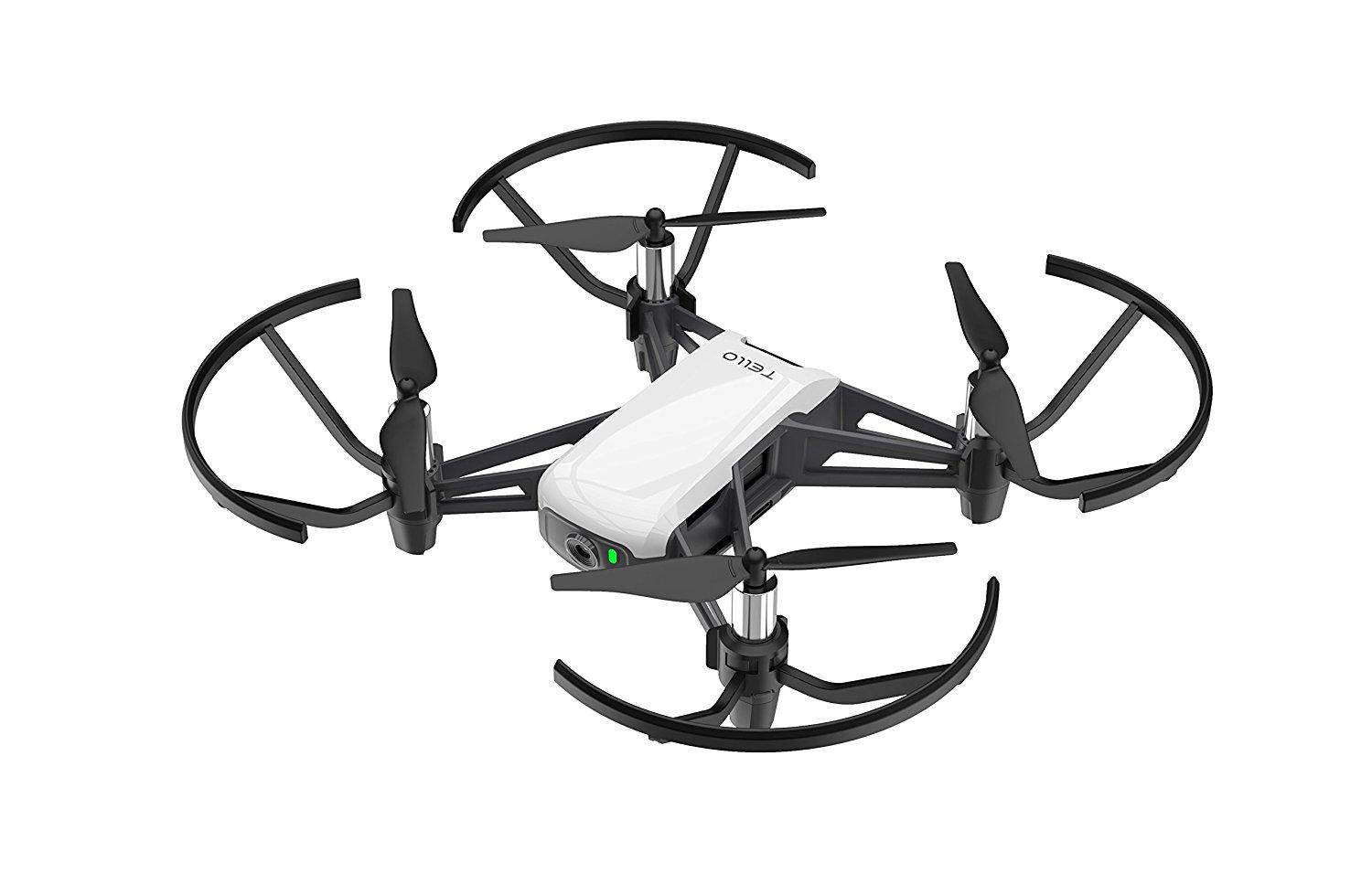 Based on DJI technology, the Ryze is smarter than most ‘toy’ drones. And it should be at this price.

It will auto-hover and – importantly – will do this if it loses connection to your phone or controller, so it shouldn’t go whizzing off never to be seen again.

It has an onboard 720p camera, but this isn’t really for great aerial footage: it’s for fun. And there’s plenty of fun to be had thanks to to all the tricks it can perform just by tapping on them in the app.

If you don’t like flying it using your phone’s touchscreen, compatible controllers include the GameSir T1d, which costs £29 / $39. 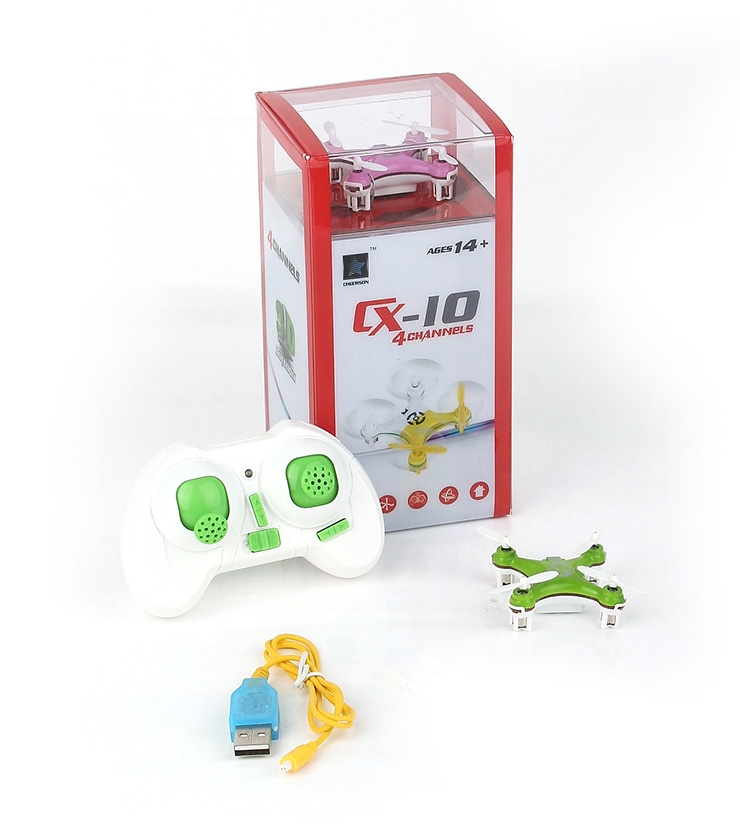 The CX-10 has been around for ages now (it’s available under various different brands on Amazon), but is one of the cheapest drones you can buy. It’s absolutely tiny and fun to fly both for beginners and experts alike.

It’s a hard drone to fly, but that goes for most of the micro drones you can buy. Unlike bigger, more expensive models there’s no auto-hover. Just throw it in the air to start flying, and once you’ve mastered doing mid-air flips you’ll be able to impress friends and family alike.

The biggest drawback is that the battery isn’t removable, so you can’t have charged-up spares ready to go. 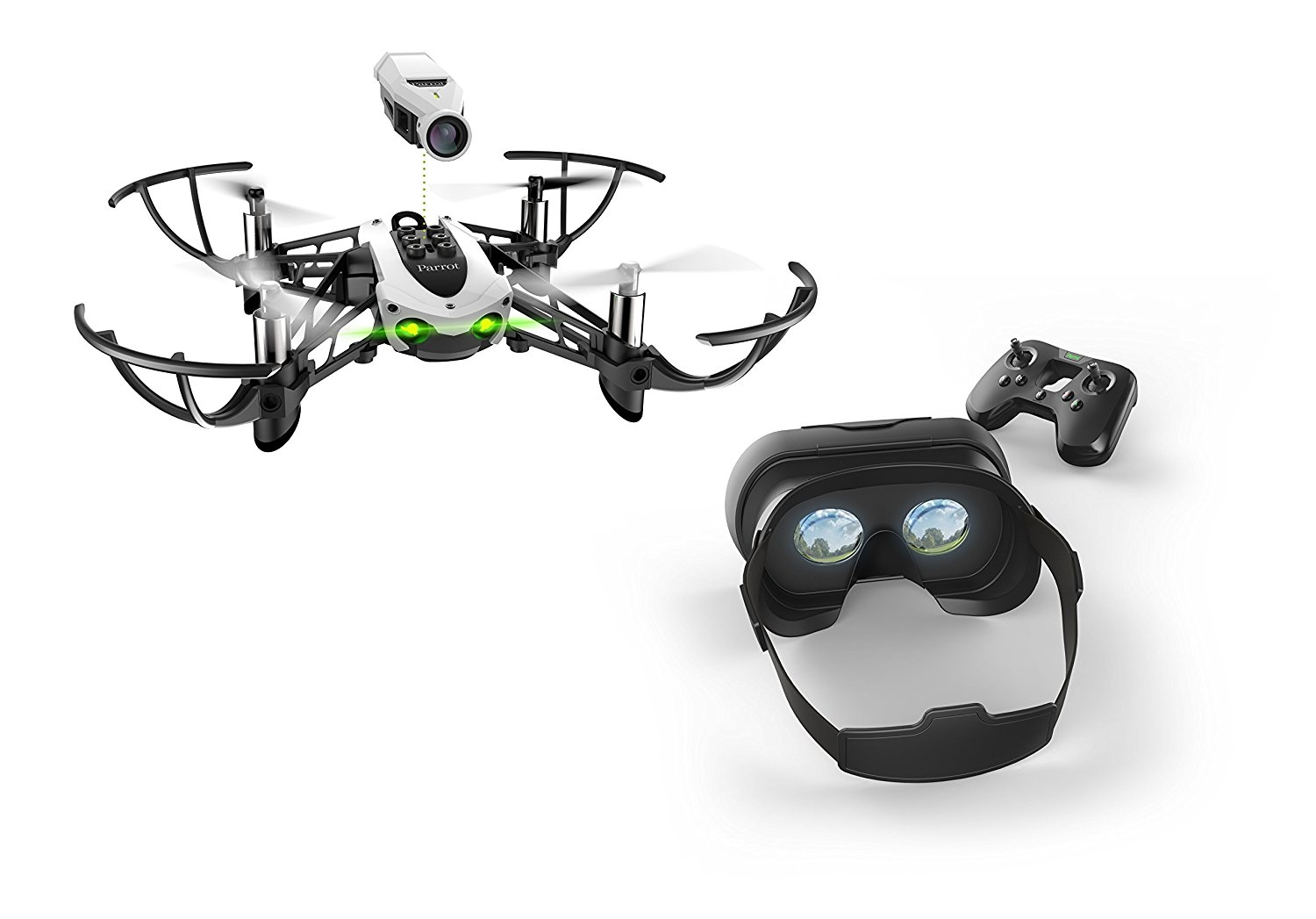 The Mambo is available in various guises, including one with an FPV – first-person-view – headset.

This ‘Mambo Mission’ version comes with the drone, controller and two fun accessories: a grabber and a cannon.

There’s a decent controller included and prop guards to protect people, property and the props themselves.

Flight time is a bit short at eight minutes with the camera on board, but spare batteries cost around £14 / $15. It’s also easy to get spare propellers and other parts, too.

If you do find the FPV version at a tempting price just bear in mind the camera, although it can record video to a microSD card, isn’t going to shoot any great aerial footage or photos: this is a more of a toy / racing drone. 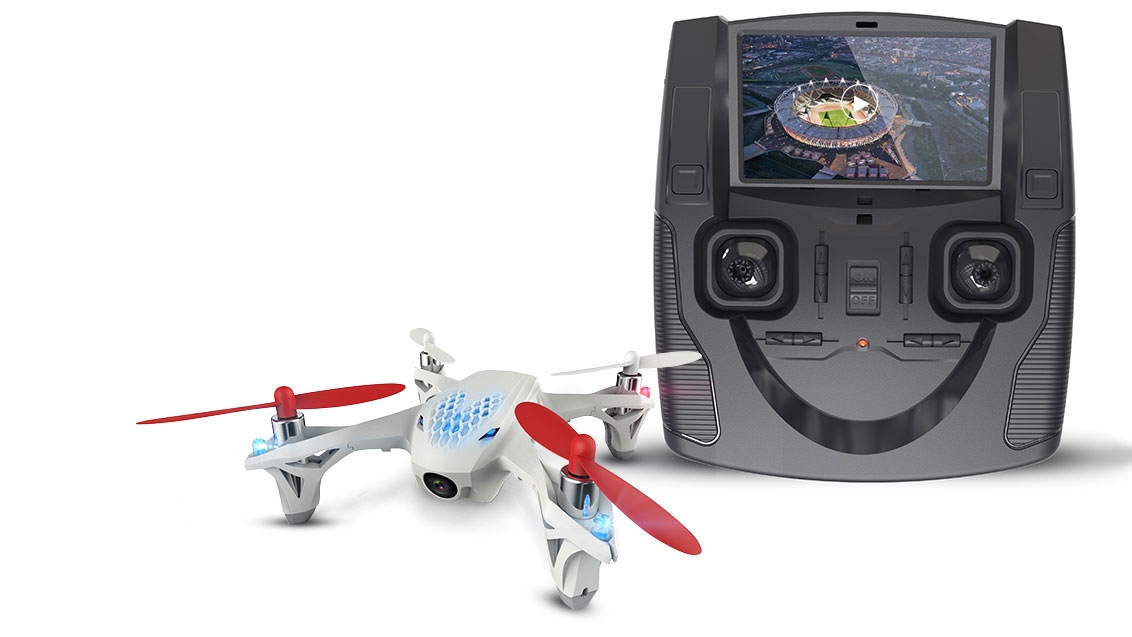 The X4 FPV isn’t meant for recording amazing aerial video. Like the Parrot Mambo, it’s intended as a starter drone with first-person view. There’s a screen built into the controller rather than a headset for your phone, though.

It’s still fun to fly, and prices have dropped loads since it first came out: you’ll pay less than £60 these days.

If you invest in some extra batteries and time in learning to fly it properly (it’s completely manual with no auto-hovering), the H107D can be a rewarding and fun drone. 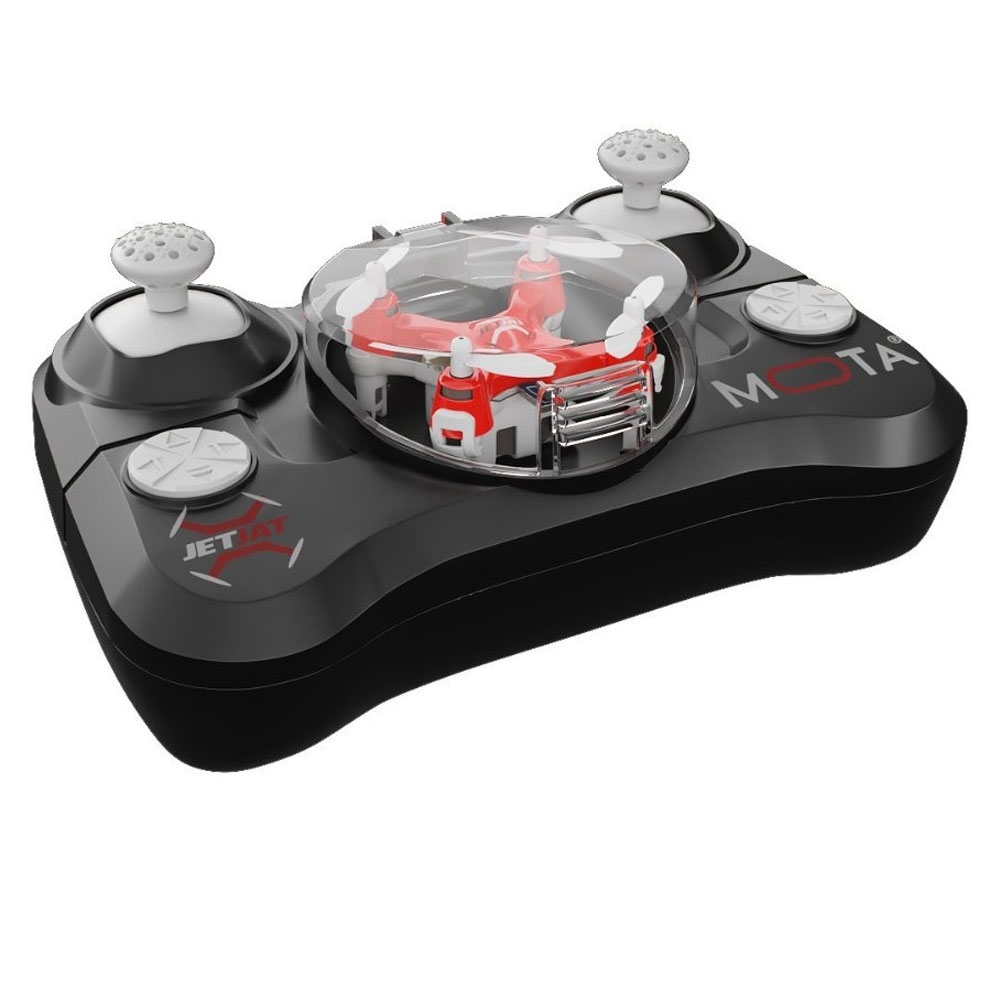 This drone is ridiculously small, measuring just 22x22x20mm. Like the Revell Proto Quad XS, it’s so tiny it can fit into a holder on the controller.

It lasts about 8 minutes between charges and the battery isn’t removable, but it will wow your friends and family – if you can master flying it. 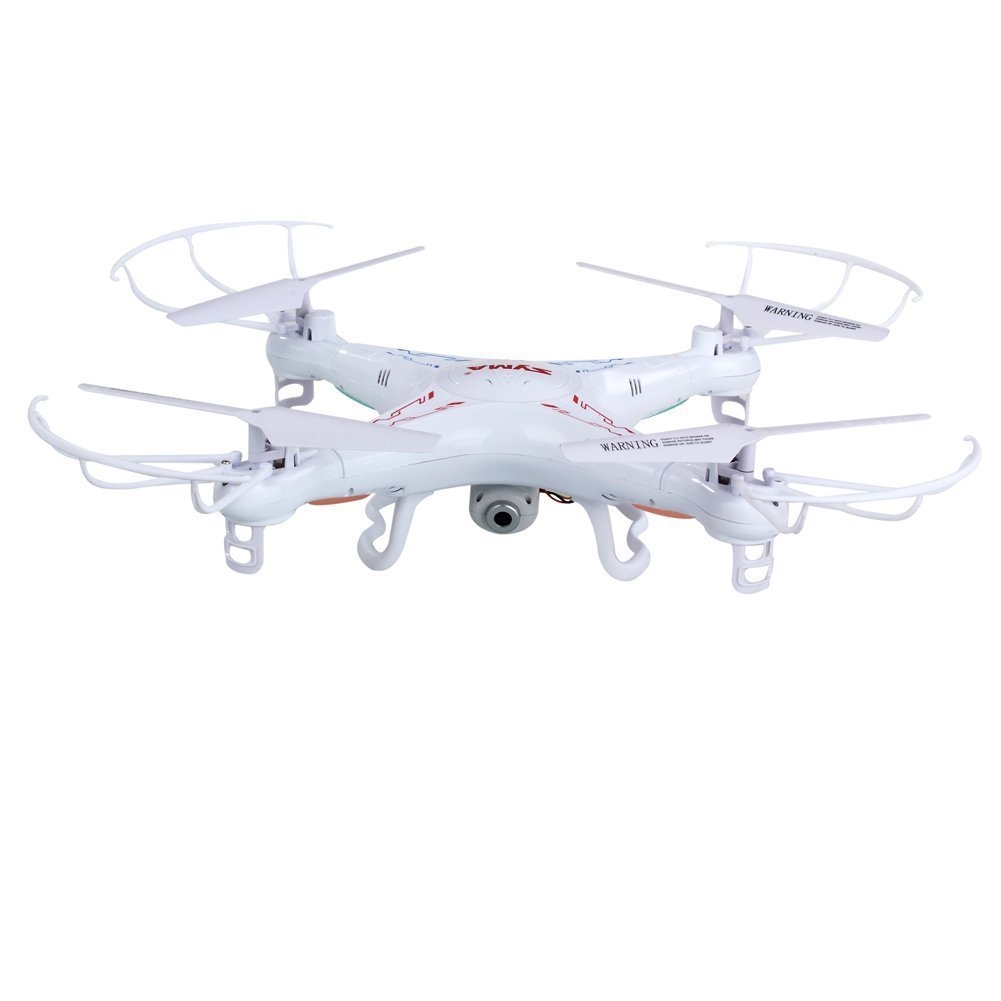 The X5C is significantly bigger than the nano quads here, measuring 310x310mm and weighing around 100g. This makes it better suited to flying outdoors where it’s less susceptible to being blown away. It has a 2Mp camera which captures shaky, poor quality video, but as an introduction to drones, it’s not bad at all.

Plus, because it’s a popular model, spares are cheap and easy to find and it’s easy to swap out the battery when it runs out. So you can keep flying without waiting 45 minutes for your micro drone to recharge over USB. 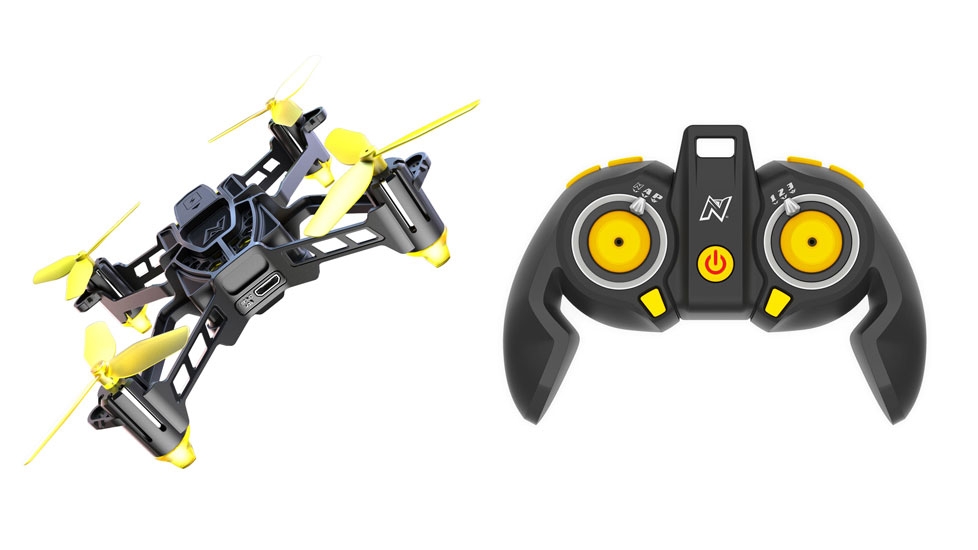 For the price you get a lot more with the Air Elite 115 than other drones.

As well as a detachable safety ring, you get a controller with quite a few buttons which allow you to make the drone perform 16 aerobatic tricks.

Plus, you can customise the drone’s setting using the Beta Flight software, and there’s even a racing simulator which runs on Windows or macOS that allows you to practice with the controller before trying the real thing.

The drone itself is designed to withstand crashes, has a quick-swap battery design and comes with a full set of spare propellers.