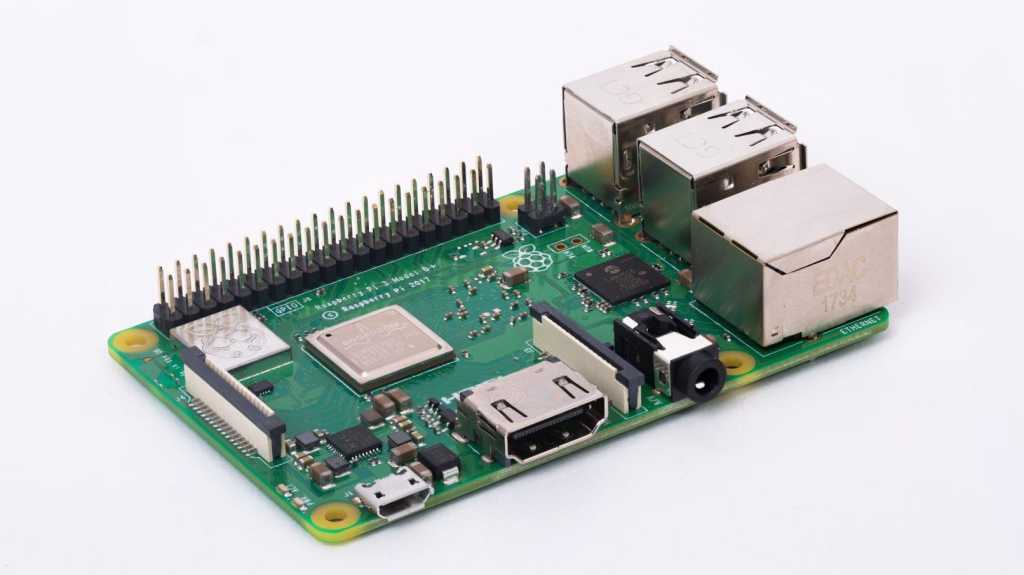 The Raspberry Pi reignited interest in the DIY home computer market. Thanks to the little marvel there are now a wide range of kits and platforms available for users to assemble their own machines, ranging from budget boards up to more expensive complete kits that include keyboards, cables, batteries, and even robotic arms.

Whether you’re looking for a project to tinker with, a chance to learn some coding skills, or just a gift for a curious kid, it can be hard to know where to begin – so we’ve done our best to break down what you can expect from the best DIY computer kits on the market.

Although it certainly wasn’t the first DIY computer kit, the Raspberry Pi has quickly become the most widely known platform thanks to a few key elements. Firstly, it’s cheap; second, it’s British (although production was moved from Wales to China in order to meet demand); and third, it was adopted by schools all over the UK as an excellent way to teach basic programming and encourage kids to invent their own technical solutions to problems.

The success of the Raspberry Pi has seen a huge range of projects spring up around the platform, with Raspberry Jams (user groups were people show off their ideas) occurring regularly around the country, and indeed the world.

There are dedicated magazines and books covering the kind of devices you can build, an excellent website that has a variety of fun projects laid out and explained, and even a recent initiative called AstroPi which enabled code written on a Raspberry Pi to be taken into space and used on the International Space Station.

Raspberry Pi has its own operating system called Raspbian – a version of Linux that’s designed specifically for the Pi, but you can also run other flavours of Linux and even a slimmed down edition of Windows 10. If you’re new to the Pi, then stick with Raspbian: you can even buy SD cards with it pre-installed so you literally just have to insert it into the slot.

There are several variants of the Raspberry Pi available. The latest is the unbelievably cheap Pi Zero (under £10/US$10), but the most powerful – currently – is the Pi 3 Model B+, which is around £30/$30.

Of course the Raspberry Pi is just a circuit board, so to do anything useful with it you’ll need a USB keyboard, mouse, monitor, and SD card to run the OS. While you can use any spares you have around the house, there are also full kits available.

As a starting point for DIY computing the Raspberry Pi, thanks to its widespread support and educational links, is an excellent place to begin.

If you want to buy a Raspberry Pi along with a few vital accessories like a keyboard and HDMI cable, you might be best off looking at our guide to the best Raspberry Pi starter kits. 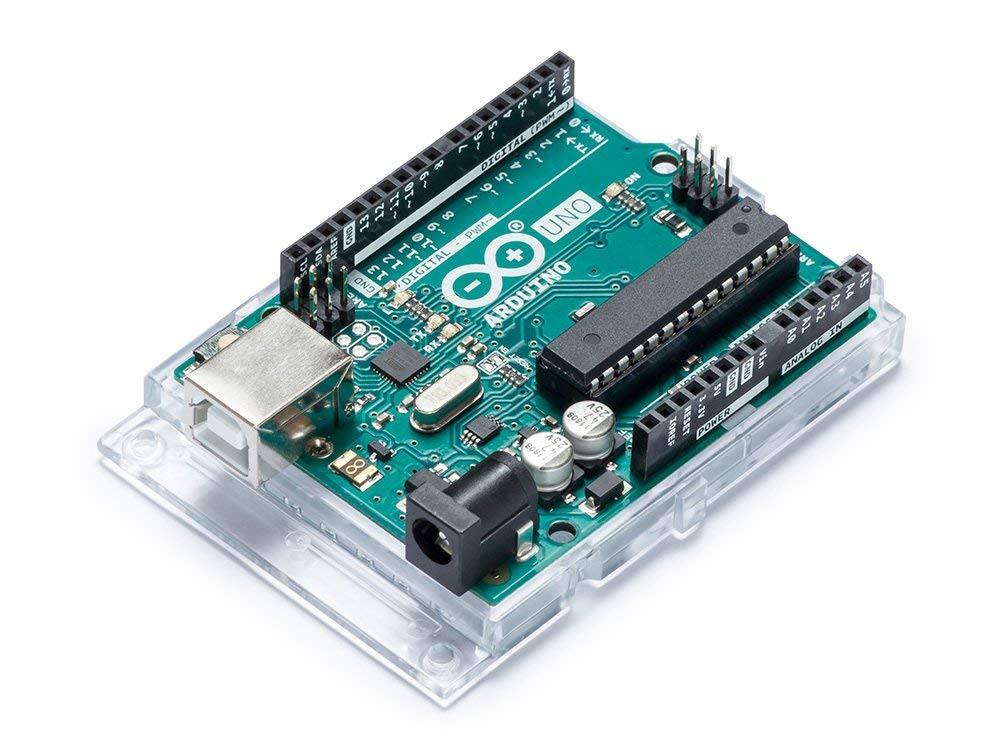 Long before Raspberry Pi was around Arduino was the place to go for do-it-yourself computing. The company began in 2005 when it released an open source platform which people could use to build a whole number of impressive devices.

From robots to security cameras, Arduino has been used in pretty much anything you can turn your mind towards. Due to recent internal disputes Arduino boards sold outside the US are now known as Genuino, but retain the same components and design.

There is actually a wide range of boards available, such as the UNO (Rev3) that costs around £29.99/US$29.99 and contains 14 digital input/output pins (of which 6 can be used as PWM outputs), 6 analog inputs, a 16 MHz crystal oscillator, a USB connection, a power jack, an ICSP header, and a reset button.

You can buy more complex boards for advanced projects, such as the Mega 2560 (Rev 3) for £35/US$35, and there is even a board for wearable projects if you want to build the next smartwatch or intelligent t-shirt.

A huge community of enthusiasts surrounds Arduino/Genuino and meet-ups are found all around the world. It does have the feel of a more advanced product, with specialised uses catered for, so if you’re confident in your abilities then Arduino is the place to go. 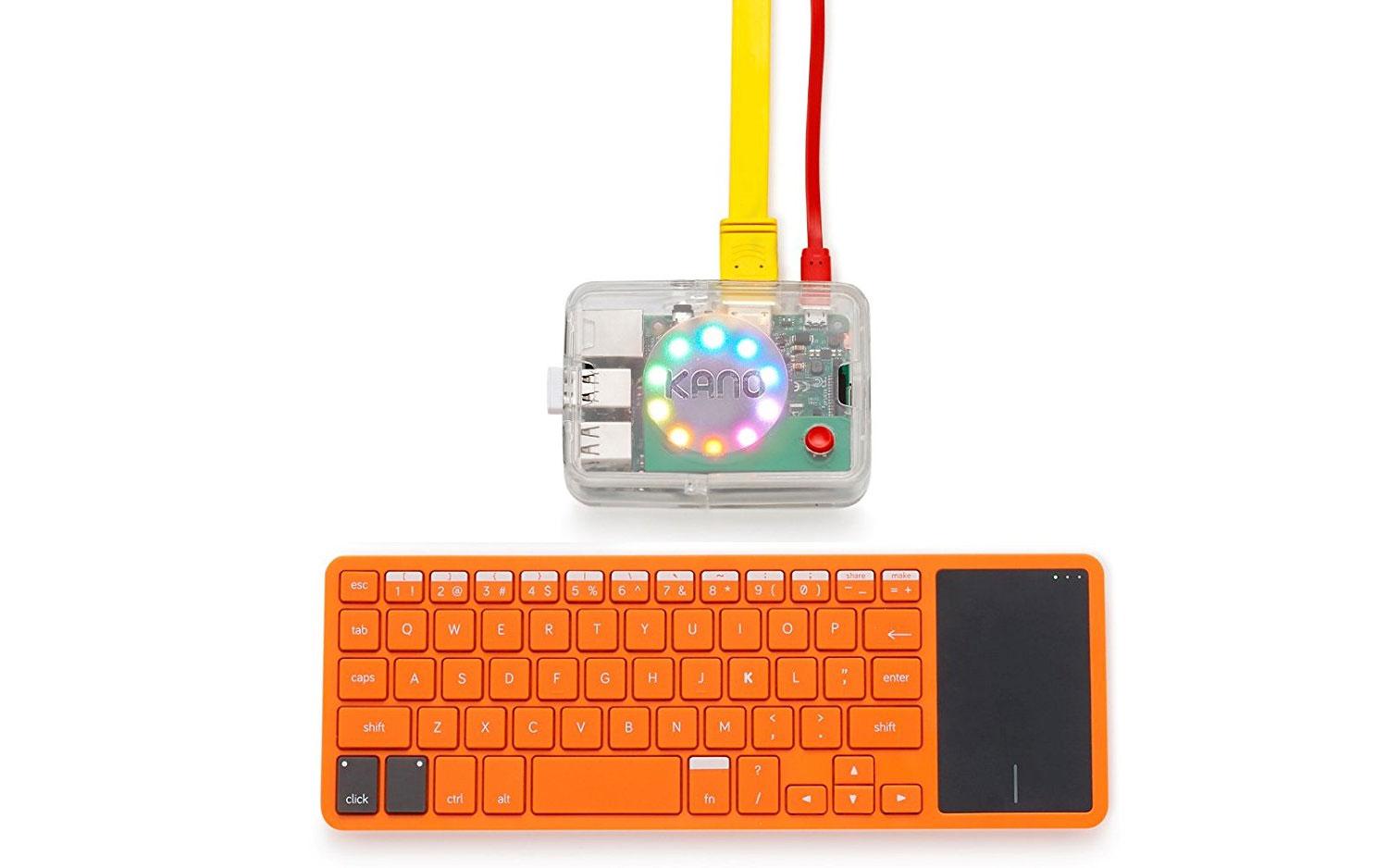 The Kano is a DIY kit that uses a Raspberry Pi at its centre, but surrounds the device with beautifully designed peripherals that fit together to make a complete, small, PC. The idea came from a challenge to build a simple computer that was as fun as Lego. Kano came up with the design, then released a Kickstarter project that became an instant success.

The software is also excellent – not only does it feature an extensive range of tools to teach real coding skills, it also wraps a lot of them up into a videogame in which you explore the world inside the computer, which should help incentivise kids to keep on learning.

While you can put together your own set for less money, the friendly, easy construction, and child-sized keyboard make this an excellent kit for the younger people on your life. One of these under the Christmas tree will certainly be a welcome present for many children this year, and a few adults too.

The company also offers kits to make your own screen to expand the set. Plus, there’s a new Harry Potter build-your-own wand kit (which doesn’t require the Kano computer to work). 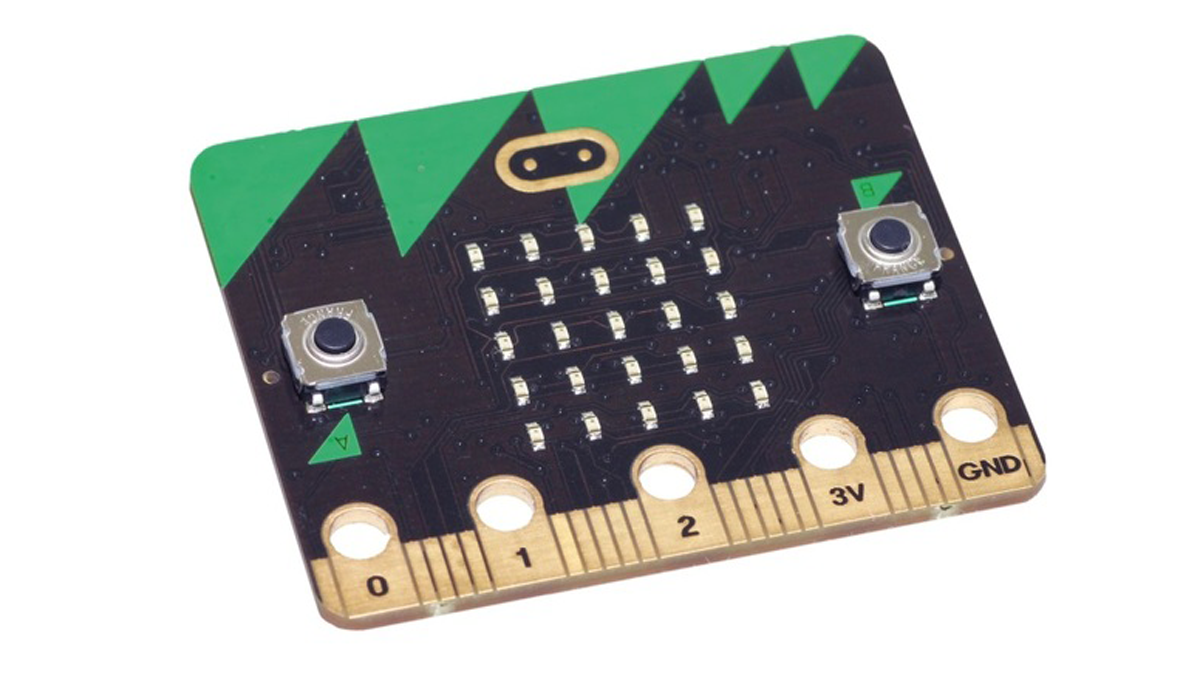 Those of a certain age (and nationality) will remember the BBC Micro B, one of the first home computers in the UK, and one that many people started their PC adventures upon. Now, thirty years on, the BBC is once again looking to bring computing into the classroom with its micro:bit.

This tiny circuit board packs some impressive specs, with Bluetooth capabilities, an accelerometer, compass, two programmable buttons, and a grid of LEDs that are also controllable.

The micro:bit can be programmed by a range of devices, from PCs to mobile phones, making it open to everyone that’s interested in making an electronic scoreboard, Bluetooth remote shutter button for a smartphone camera, or even a basic games machine.

You can buy the micro:bit board on its own, but we recommend the micro:bit go kit, which only costs a tiny amount more but includes batteries, a battery holder, and a USB cable to help you get started. 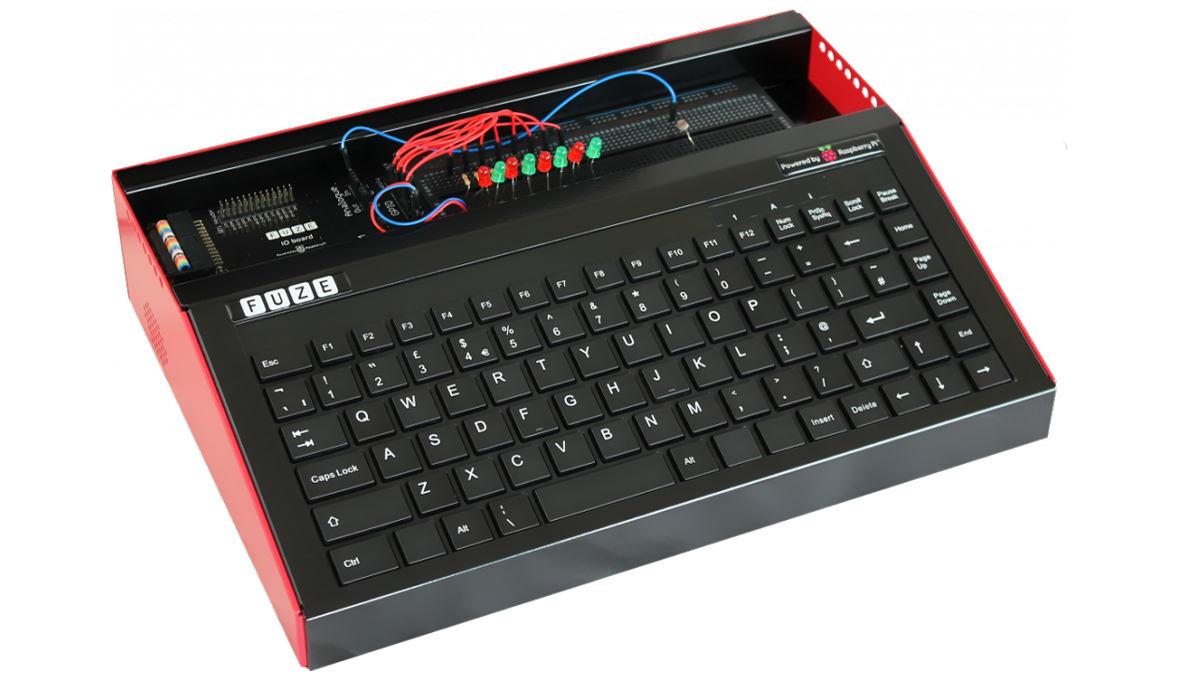 Another Raspberry Pi-based system is FUZE. This titanic unit is a fully metal construction, with a full size keyboard, chunky body, and all powered by an included Raspberry Pi – though you can now get a separate model with the slightly more powerful Asus Tinker Board instead.

The look is very reminiscent of early home computers from the ’80s, and with its focus on teaching children programming, starting with FUZE BASIC, the comparisons to BBC Micro B and Acorn Electron models are justified.

The kit also comes with a box of electronic components and a ‘breadboard’ on which to mount them. This allows children, or indeed adults, to build simple electronic devices and control them via programs written on the unit. The included, and very detailed, project guides and programming manual make the process a lot easier, enabling users to create things quite quickly.

All of this doesn’t come cheap, as the standard FUZE model costs a not inconsiderable £129.99, but if you’re going to spend that kind of money then we recommend adding an additional chunk of cash and buying the model that comes with a programmable robot arm. Yes it’s £189.99, but come on. A robot arm. If that doesn’t get kids interested in programming, nothing will.

The Fuze is only sold in the UK, but you can always get it shipped abroad if you live elsewhere. 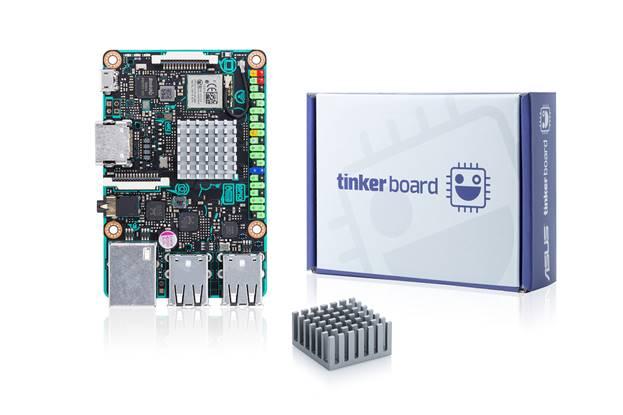 Want something more powerful than a Raspberry Pi, but which is compatible with Pi code? You need a Tinker Board.

Handily, Asus’ mini computer is compatible with most Raspberry Pi cases as it has the same ports layout, including the 40-pin header.

It might cost about double what a Pi 3 Model B will set you back, but the Tinker Board has Gigabit Ethernet, an audio chip which supports 24-bit / 192kHz and, at its beating heart, a quad-core Rockchip RK3288 processor and 2GB of RAM (twice that of the Pi).

The operating system is your choice: you can download Android 6 (Marshmallow) or TinkerOS, which is based on Debian Linux.

Annoyingly, the version of Android doesn’t include the Play Store, but as you’re building your own computer, side-loading Android apps shouldn’t be too much of a stretch.

One disadvantage – a major one for beginners – is that the Tinker community isn’t nearly as large as the Pi’s, and as not all software designed for the Pi will work on the Tinker Board without modification, it could prove frustrating if you don’t know how to fix these kinds of problems. Otherwise, this is a great alternative if you’re after something a bit beefier. 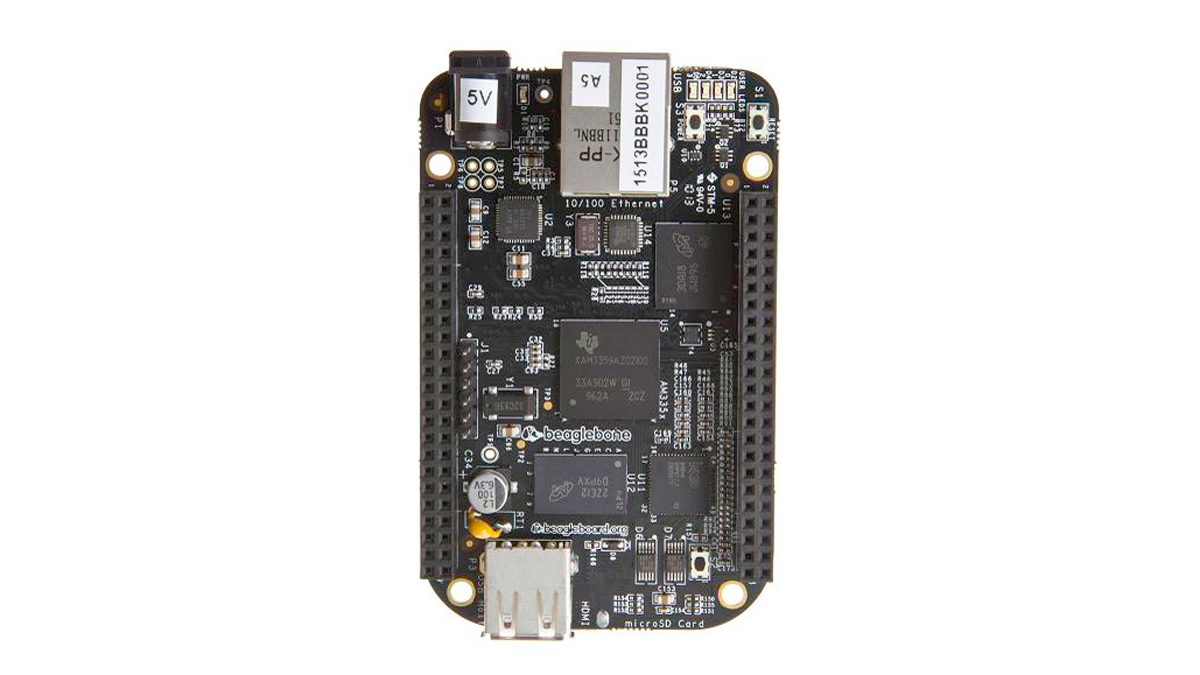 The BeagleBone Black is another interesting alternative to a Pi. The small board is inexpensive and comes loaded with a 1GHz ARM Cortex A8 CPU, 512MB RAM, 4GB of 8-bit eMMC on-board flash storage, a 3D graphics accelerator, plus USB, ethernet, and HDMI ports.

It runs on a range of operating systems, with Android 4.0 supported, alongside Ubuntu, Debian, and others.

When connected to your PC the BeagleBone is recognised as a standard flash drive, and you can access the unloaded files that link to online tutorials about how to use the device and projects you might want to attempt.

BeagleBone also makes several other boards, varying in complexity and capability, while the user base is growing, meaning there are plenty of people to help you if you get stuck. The BeagleBone Black is a very tempting unit for those who want to push things a little further than your standard Raspberry Pi.