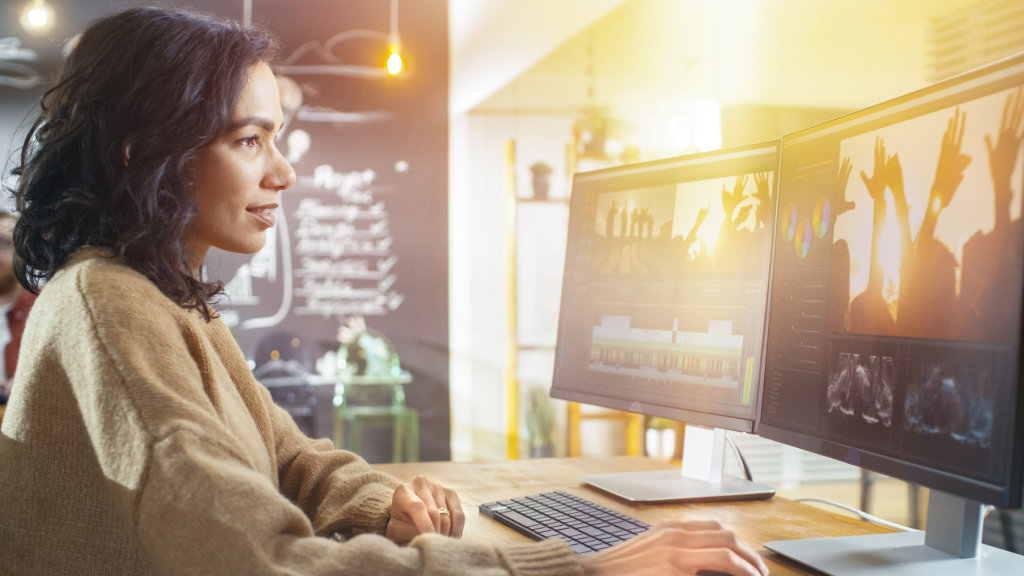 Video production used to be overly complicated and the sole preserve of experts in the field. Now everyone’s doing it, which means there’s a surprising amount of decent video-editing software available for free.

These contain much of the same functionality as the expensive, paid video editors, allowing you to create professional-looking videos complete with animation and special effects. Some of the free tools we feature here have even been used in the production of Oscar-winning Hollywood movies, hit TV shows such as Red Dwarf, and by NASA.

Every video editor is different, but something all these tools have in common is the fact they’ll cost you nothing to use. This means you can install them all and see which fits you best.

You’re probably no stranger to the idea that there’s no such thing as a free lunch, and it’s true that many of the free video editors here are simply cut-down versions of paid-for utilities. This means they’ll be missing various features, such as multi-cam editing, or when you go to export your video you’ll find there are resolution restrictions. (We’ll explain the limitations of each program below.)

Sometimes it’s possible to add on some of these extra features without paying the full price for the premium software package, and that’s definitely worth keeping in mind if your needs are very precise.

Having tried the free options outlined below, if you still find yourself wanting something more we recommend checking out  CyberLink PowerDirector or Magix Vegas Movie Studio. Professional options include Adobe Premiere and Final Cut Pro. 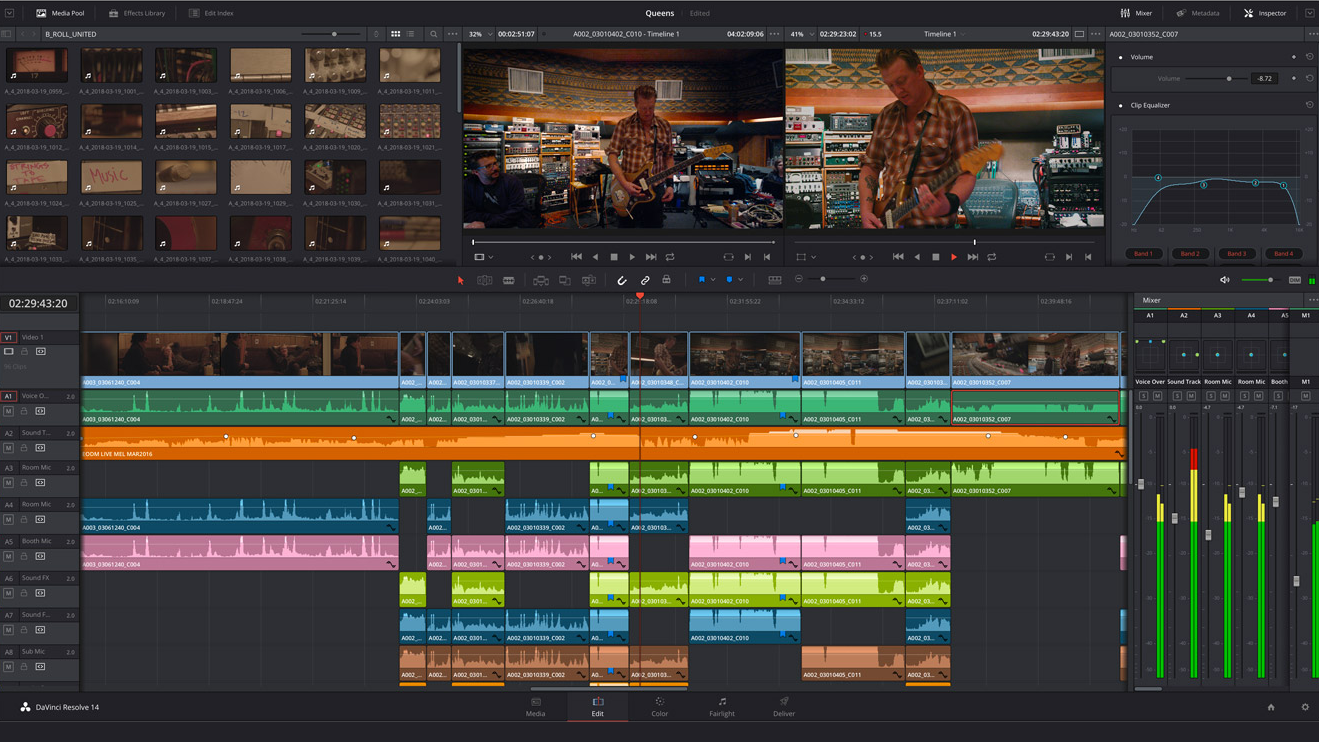 It’s hard to believe that BlackMagic has made DaVinci Resolve 16 completely free.

The full studio version costs around £300/$300 and is widely used for colour correction in Hollywood movies, with recent credits including A Star is Born, Avengers: Infinity War, Solo, and Bohemian Rhapsody. Yet, the free version has hardly any features missing compared to its illustrious brethren.

Ok, so it can’t do HDR grading, multi-user collaboration, and doesn’t feature the new Neural Engine which enables auto-colour correction and facial recognition among other things, but other than that, this is the same stuff the big boys use and, for the most most part, home users won’t need any of those missing features.

If you’re already familiar with Adobe Premiere or Final Cut Pro, you’ll adapt quickly to Resolve. There’s a bit of a learning curve if you’re a total newbie as this is not something you can pick up in an afternoon and end up with a masterpiece. But it’s worth investing the time as you really can create that masterpiece when you’ve learned how to harness all that power. 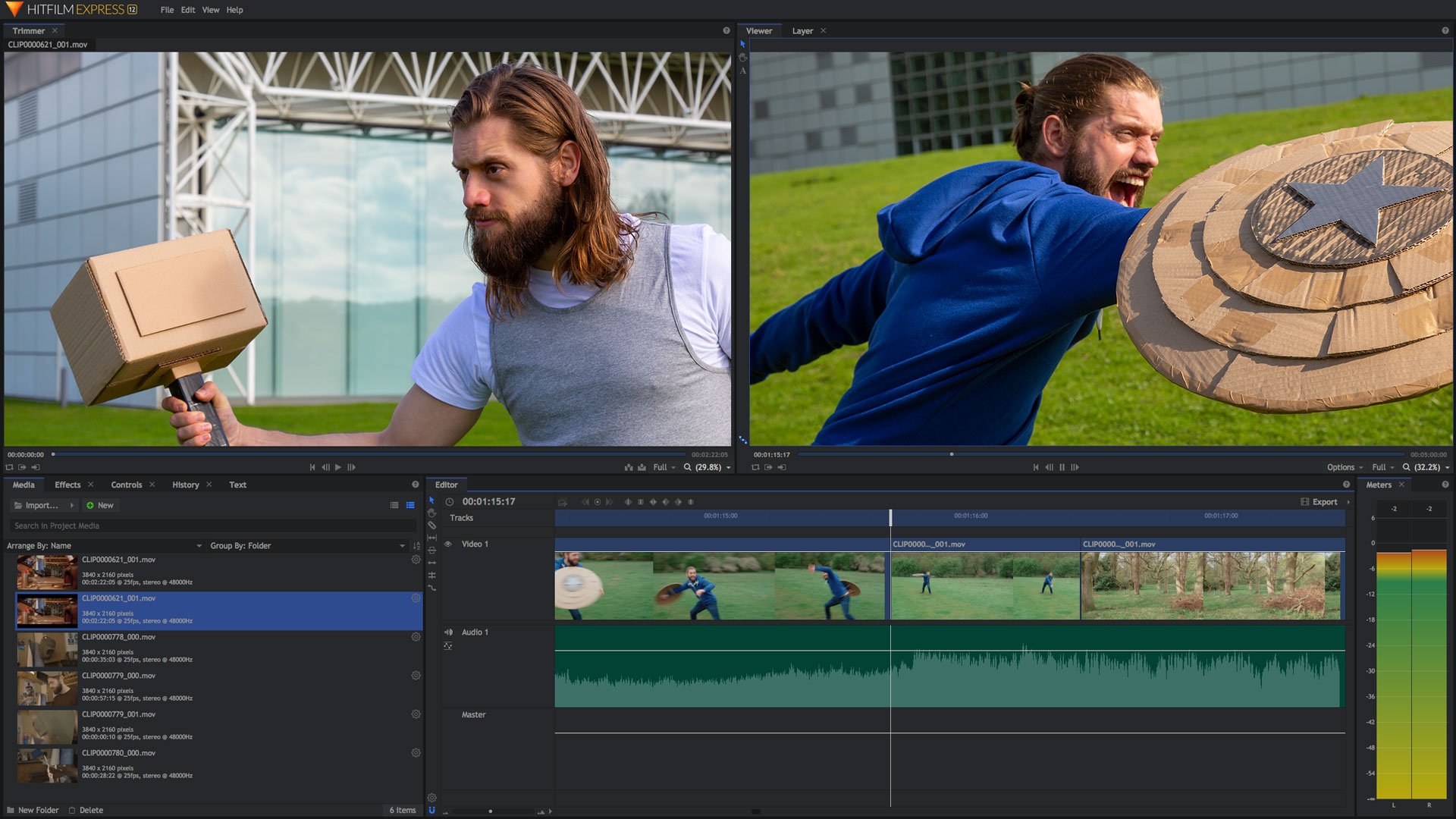 HitFilm has been around since 2011 and in that time the software has gone from strength to strength.

HitFilm Express is the free version currently on offer, and includes a surprising amount of the features you’ll find in its big brother HitFilm Pro, albeit without the £265/$299 price tag.

The interface is clean and makes sense without too much explanation, but if you do find yourself getting lost then the raft of tutorial videos on the HitFilm site will get you going once more.

While HitFilm Express is a standard video editor, there is definitely a lean towards special effects, and the package includes 2D and 3D compositing capabilities, automatic motion-tracking, plus green screen removal tools.

Perhaps the most alluring part of the Express experience is the wide wealth of expansion packs that you can buy for between around £10/$10 up to £50/$50. These mean you can upgrade the software over time, adding only features that you actually need. Genius.

At the time of writing these include various 3D effects for titles or rendering actual 3D models, colouring packs to give your creations distinct styles, compositing tools for special effects, JJ Abram-style lens flares, and a whole host of others. 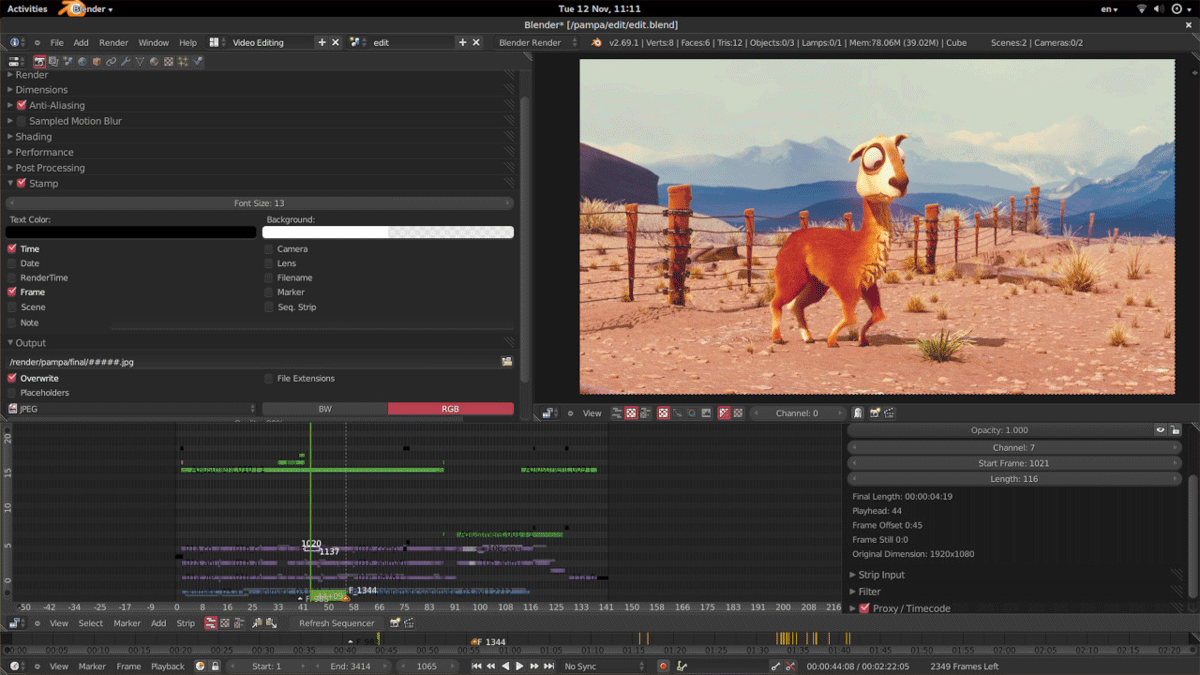 Blender is a hugely powerful open source software suite primarily used for the creation of 3D modeling and animation.

In fact it’s so capable that it’s been used to create animations for the History Channel, TV adverts in a number of countries, special effects on series ten of Red Dwarf, and demonstration videos for NASA.

It was even found on the set of Spiderman 2, when animators put together special effect storyboards for the director Sam Raimi using the software.

So why is it included in this round up? Well, aside from the fact that you can create animated features or shorts on Blender, it also has a fully fledged video editor built-in.

Clips can be placed on a timeline, edited for length, overlapped with others, and joined with a range of transitions or fades, just like on any other package.

Various advanced features can also be accessed with a little effort, including 2D and 3D motion tracking, compositing of animated objects and real footage, plus even some nice camera correction tools that can deal with lens calibration and image stabilisation.

As Blender is an open source project the documentation can be a little random at times, but the healthy user forums mean that you can usually find the answer to your question without much difficulty.

You will of course have a fair few questions because there is simply so much you can do with this software. If Blender was on sale for a couple of hundred pounds it wouldn’t look out of place. The fact that you get a package like this for free is….well, ridiculous. 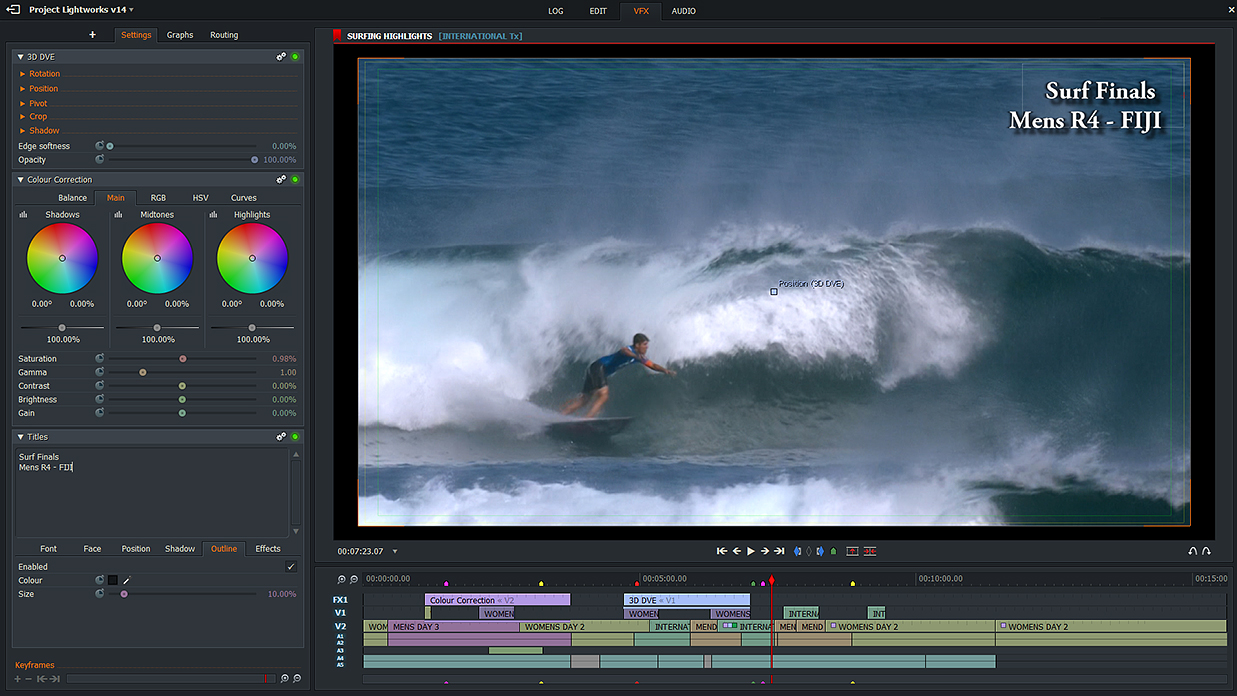 Lightworks has been used to create Hollywood movies, including The Wolf of Wall Street with Leonardo DiCaprio. There are free and Pro editions, but the main difference is the output formats, with the free version limited to 720p resolution.

You don’t get project templates, scrolling titles and other fancy effects, and instead it focuses on providing precision tools and clip handling.

Videos are imported and organised into bins and racks, and rooms are created with editing layouts. Video clip handling is very database-like with multiple views, searching, sorting, tagging and so on.

It’s designed to enable teams of editors using multiple workstations to create two-hour movies containing dozens of scenes and hundreds of clips. This would be impossible with the other video editors.

The editing tools are very powerful and they offer a fine degree of control that other video editors don’t have.

Video and audio tracks, of which there can be many, can be independently edited, so you can cut a section of video from the middle of a scene leaving the audio and cut away to show something else, then return while the audio continues to play.

The flexibility you have when joining scenes is excellent and in and out points can be finely tuned directly in the timeline.

There’s a limited range of special effects like transitions, but TV shows and Hollywood movies rarely use anything other than simple cuts and fade from/to black.

Lightworks is aimed at professional video editors and it is fascinating to use a tool employed by Oscar-winning Hollywood movie editors. It doesn’t do a lot, but what it does is brilliant. 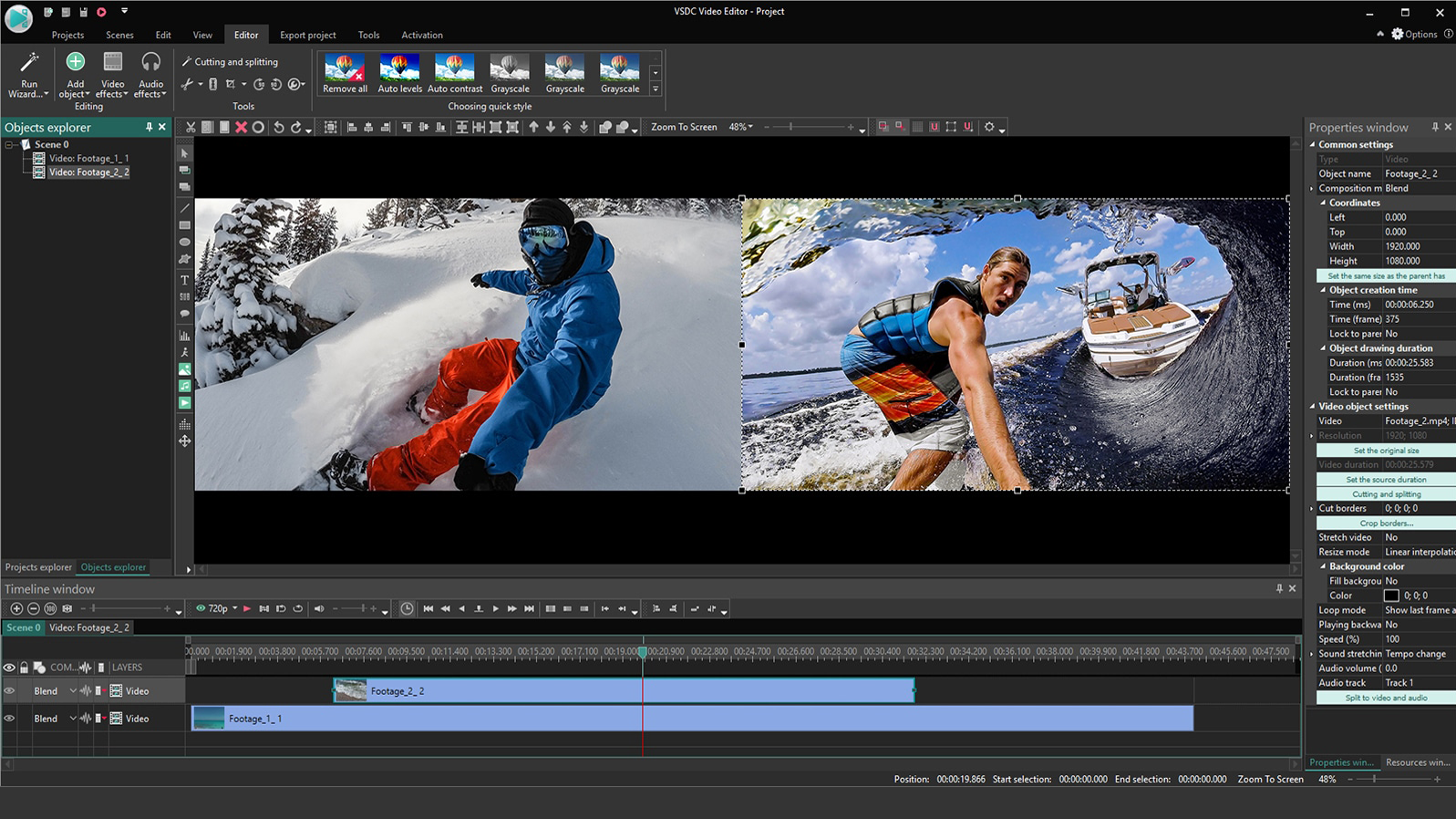 In VSDC you create a project and this has a number of scenes. Each scene has a number of objects and these can be video clips, photos and other items. You can apply various effects to the objects in a scene and there are a lot of them to choose from.

The brightness, contrast, hue, saturation and other attributes can be adjusted, objects can be flipped, skewed, rotated and so on, there are fire, water and plasma effects, and several transitions.

Video clips can be trimmed and cut into smaller parts, and moved around. Then there is a whole series of audio effects too. If you want to do things like picture-in-picture, add speech bubbles with text, overlay lines, rectangles, and ellipses, then VSDC is the tool for the job.

The range of output formats is excellent, including support for H265/HEVC, 4K,  as well as presets for PC, DVD, Xbox, Playstation, smartphones and more. Videos can be output to VCD, AVI and MPG too. 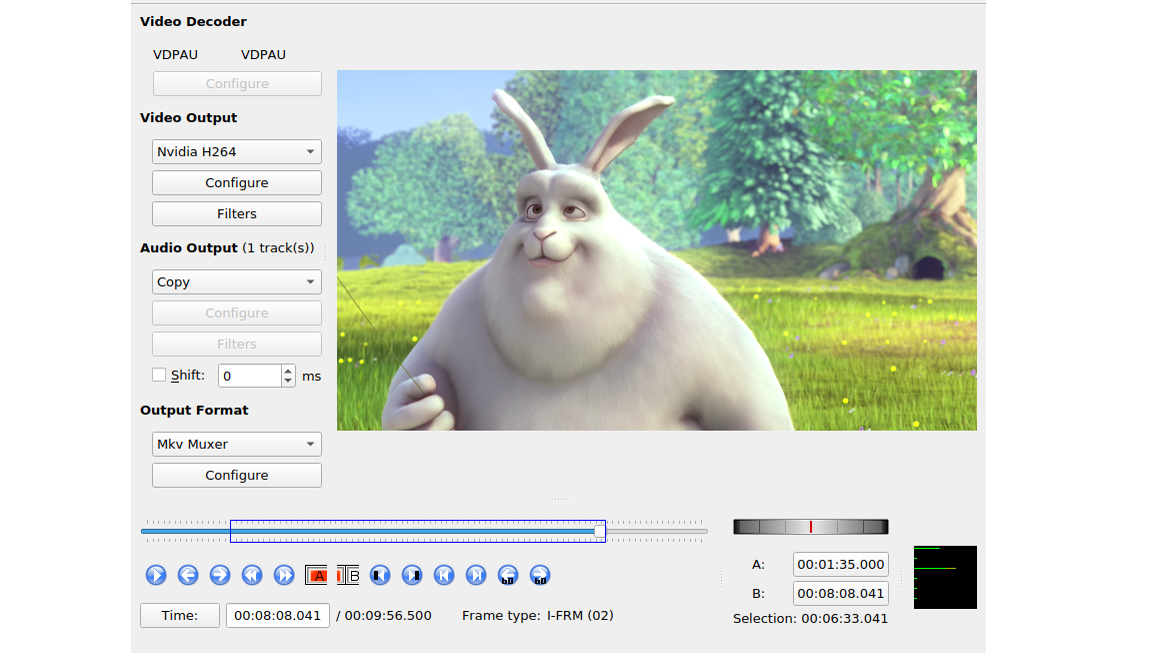 Avidemux is a specialised video editing tool and it is not a general movie maker. Only one video clip at a time can be loaded, as there isn’t even a time-line, so it’s not possible to create a movie by stitching together scenes from several sources. That doesn’t mean that you should instantly discount it thought, as it can be quite useful as a tool to prepare clips for use by another movie editor.

One of Avidemux’s main skills is manipulating the output. There are eight categories of filter and numerous items in each category. Among the options are add borders, add a logo with alpha blending, change the frame rate, crop, fade in and out, rotate, flip and resize.

You can adjust the brightness and contrast, hue and saturation, reduce noise, sharpen edges, and more.

If you had clips of different sizes and frame rates, as you might if you have used different digital cameras, camcorders and mobile phones over the years, Avidemux could be used to make them all the same size and frame rate before you use them in another video editor to make a movie.

There are some useful presets, such as DVD, 720p, PSP, SVCD and so on.