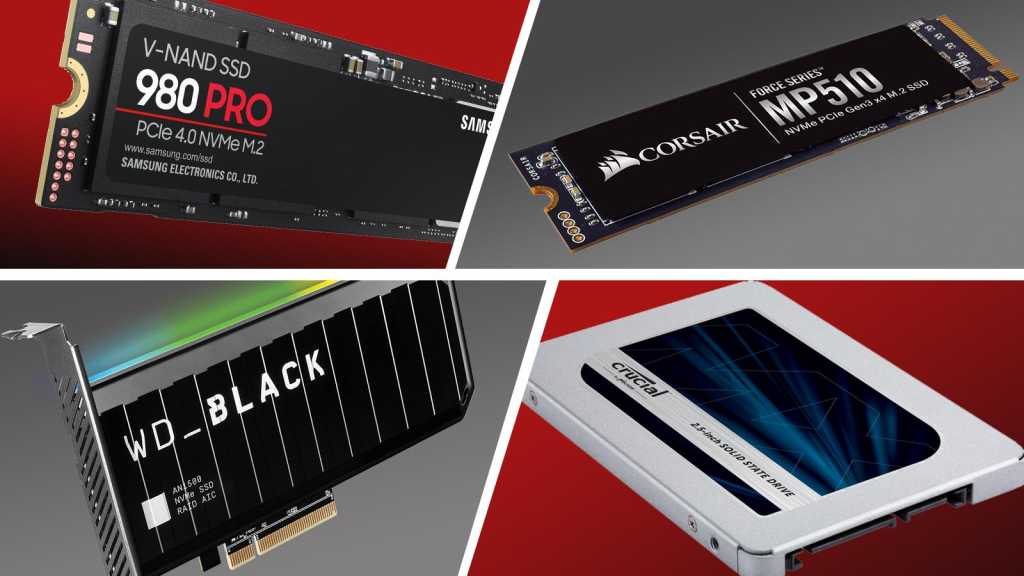 Solid-state drives (SSD) are the modern storage option, but as the name suggests they have no moving parts like a traditional hard disk drive. So not only are they more rugged than hard drives, they’re much, much faster. For a big performance boost, here are the best SSDs you can buy.

This isn’t about go-faster bragging rights though. Yes, you can copy enormous files to an SSD in record time, but it’s the massive boost that the drive will give you your computer’s responsiveness that will shock you most: applications launch almost instantly, web pages load faster, and Windows simply feels a lot faster.

SSDs come in different sizes and shapes so we’ve tested a range of different types, predominantly modern M.2 NVMe (PCIe) drives but you might also see traditional SATA and others. Many are even compatible with the PlayStation 5 console.

We’re testing internal drives here but we also have a chart of the best portable hard drives and SSDs if that’s what you’re after. 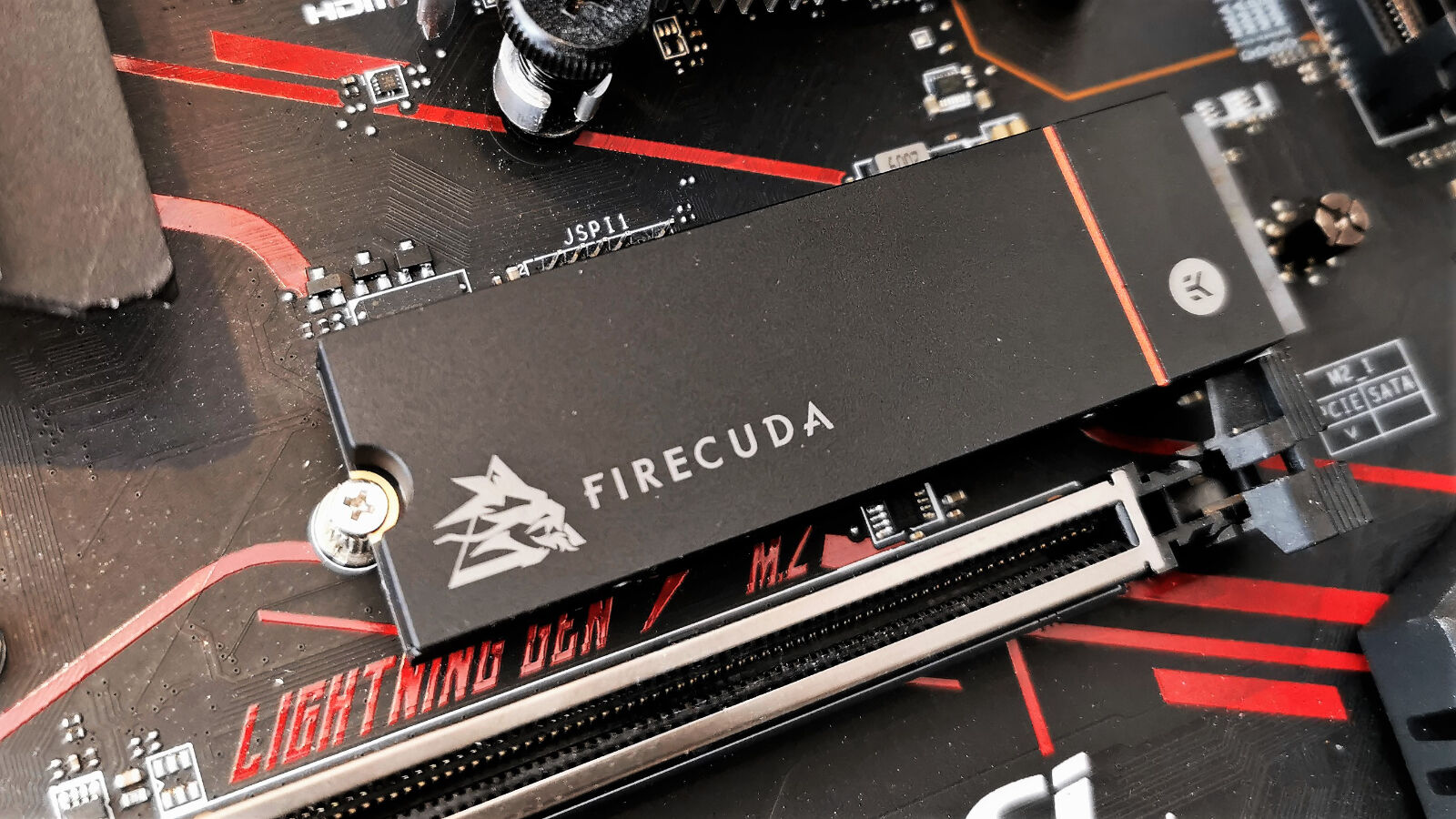 The FireCuda 530 delivers on everything an SSD should with stellar performance, incredible lifespan and effective thermal management if you use a heatsink.

There’s even a special warranty with three years of data recovery should the drive fail – something that’s normally reserved for enterprise-class devices.

It’s a great choice for PC and console owners who want the best-in-class PCIe 4.0 drive. You just might struggle to afford one, especially at the 4TB capacity. 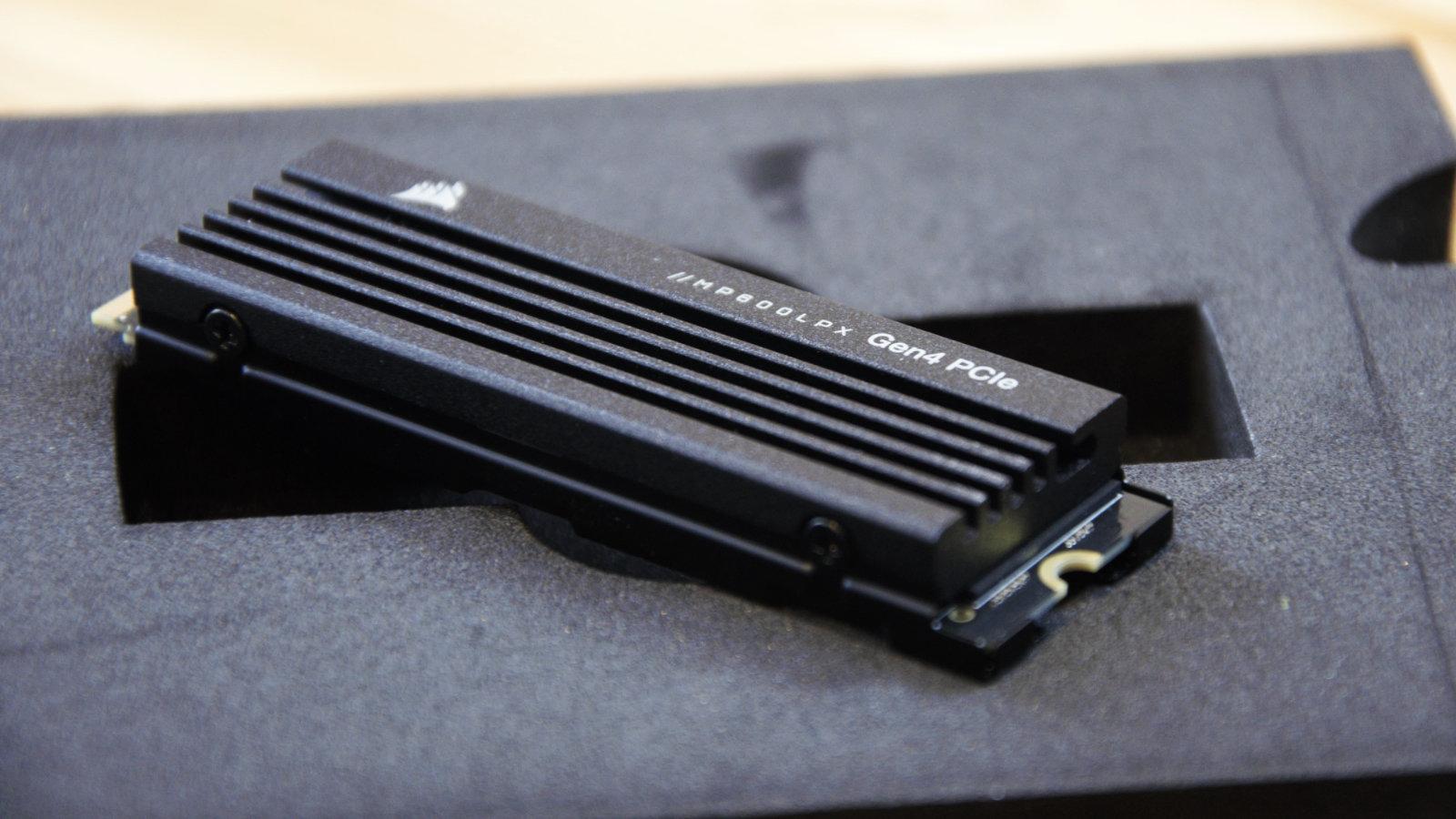 There’s very little to dislike about the MP600 Pro LPX as long as you avoid the slower speeds of the smallest 500GB capacity.

It comes with a heatsink and unlike the MP600 Pro fits into the PS5. The performance is actually beyond what Sony’s console can take advantage of but the price is cheaper than the FireCuda 530 so it doesn’t really matter.

For PC users, firmware enhancements and hardware encryption make the LPX all the more tempting. 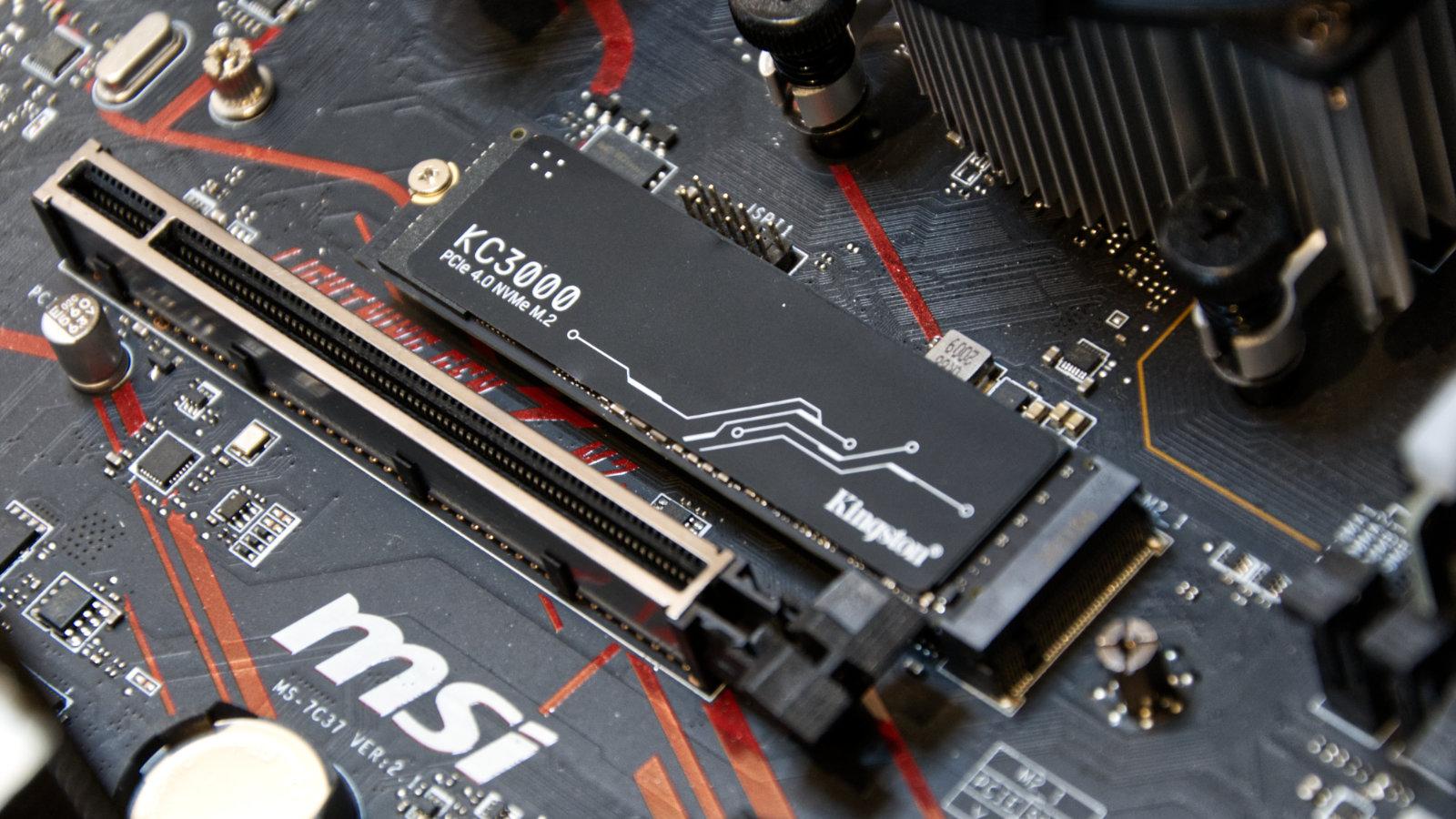 Kingston’s latest effort is another good option – alongside Seagate and Corsair – for those wanting a Gen 4 drive in a PC or PS5.

The KC3000 offers excellent performance in a range of challenging use cases and the heat spreader is thin enough to ensure it fits neatly into Sony’s next-gen console.

There are only minor points putting it behind the competition such as price, the lack of hardware encryption and a small power consumption issue.

Still, if you see it on offer somewhere it will make for a decent drive. 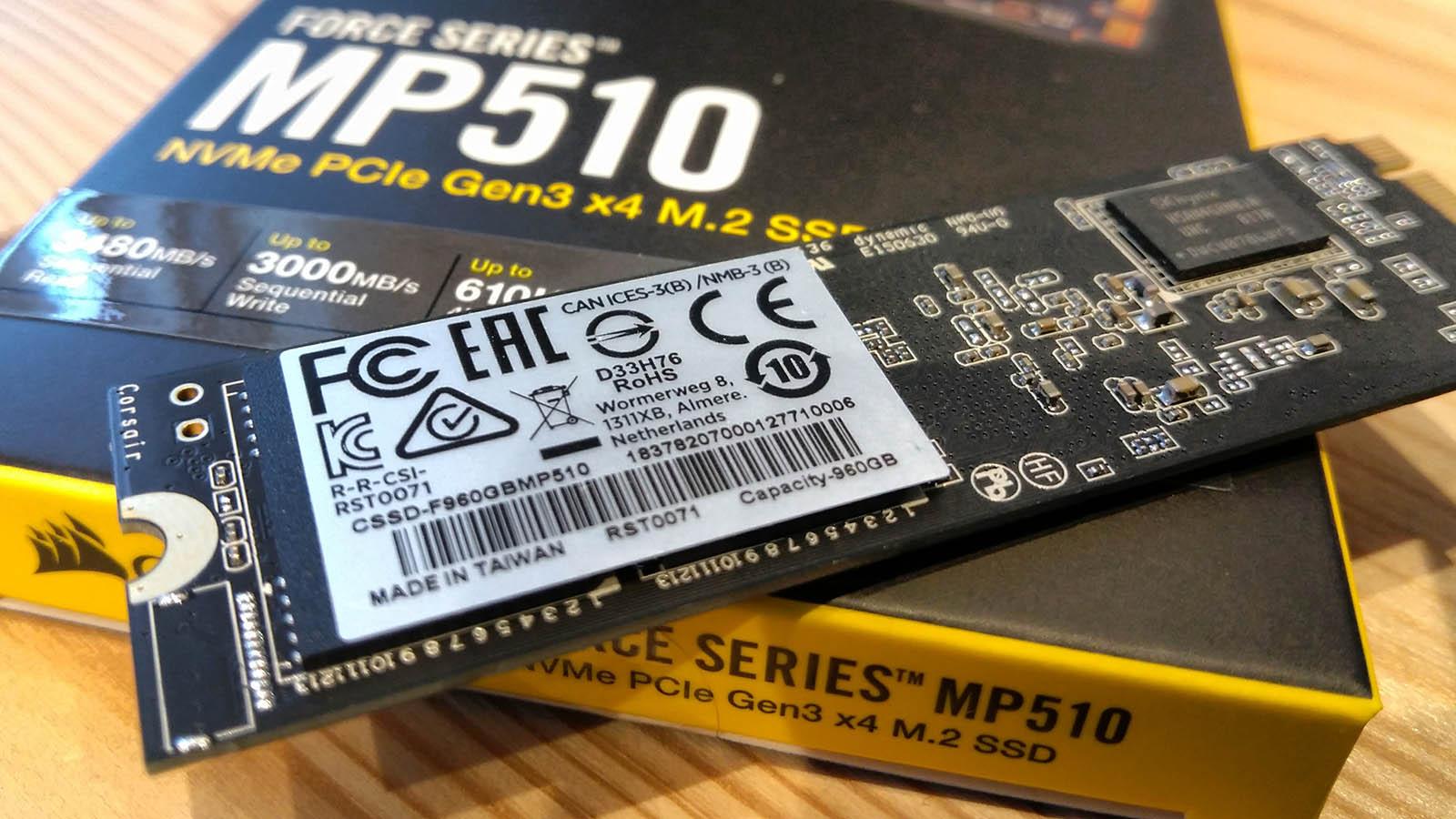 We’re blown away by the MP510 which is a drive that offers everything you could want from an SSD. It combines performance, endurance, capacity and price.

PCI bus connected NVMe cards are historically be expensive and lower capacity, but not anymore. The newer and faster PCIe 4.0 is available elsewhere, but this is still a solid choice for a lot of users out there.

You can even get it in 4TB but the price is high enough that you should consider the jump to PCIe 4.0. 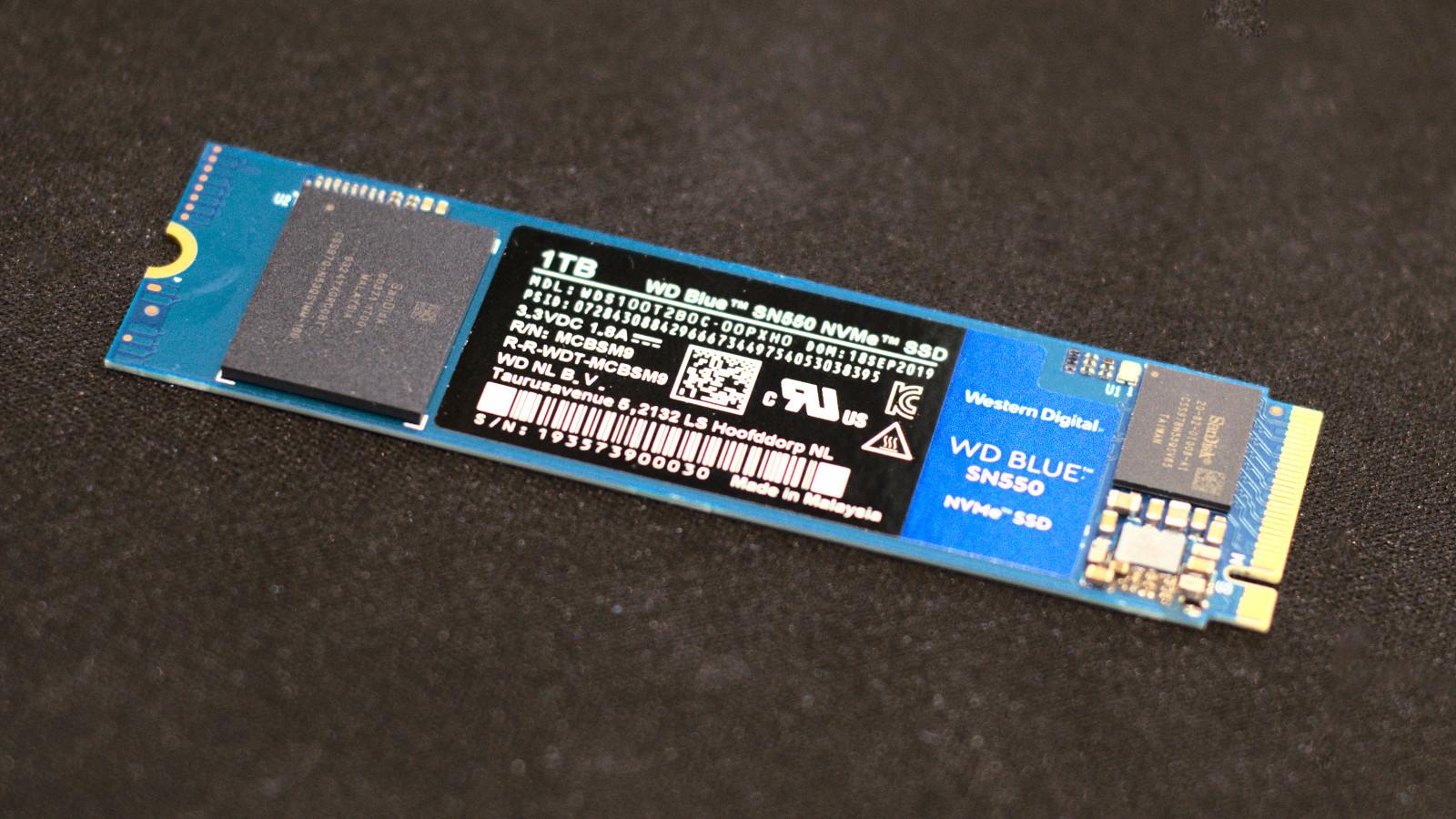 WD has done a great job of designing an SSD that strips functionality back to the bare minimum to make it cheap enough for most PC owners to consider as an affordable upgrade.

This doesn’t provide ultimate speed or hardware encryption then but it’s still substantially quicker than any SATA drive. We’d like a 2TB model and you’re better off getting the larger capacities but the Blue SN550 comes highly recommended from us.

It’s the fuss-free way to upgrade to NVMe if you’re on a budget. 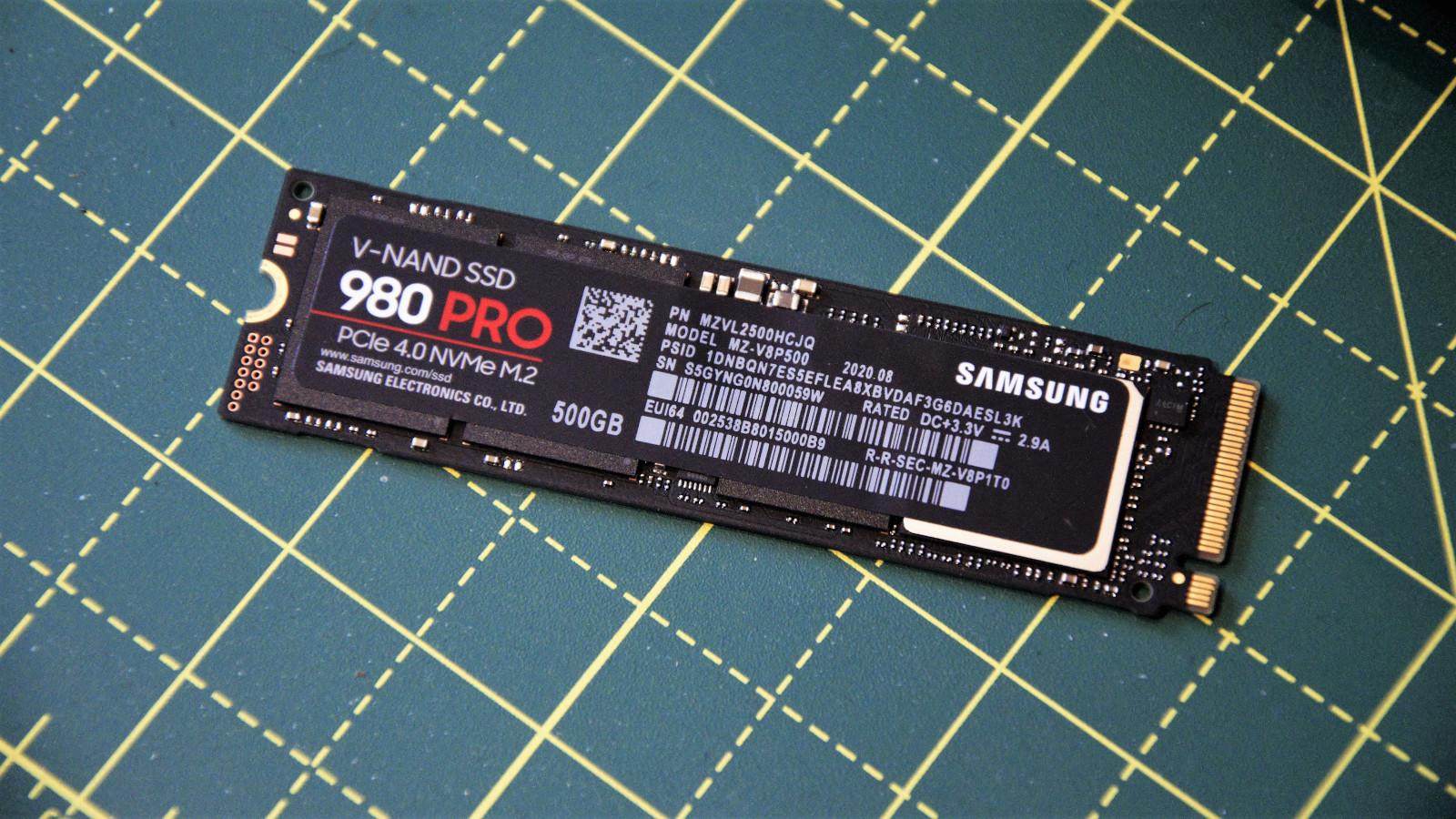 While the 980 Pro will work in older PCIe 3.0 slots, you won’t be getting the full speed so upgrading your motherboard might be necessary. And on that front, you’ll currently need an AMD Ryzen processor in a B550 or X570 chipset slot.

As you might expect for a new standard, the price per GB is high so upgrading is costly. Especially if you go for higher capacities, which in this case, is advisable as Samsung doesn’t offer consistent specs across the range. 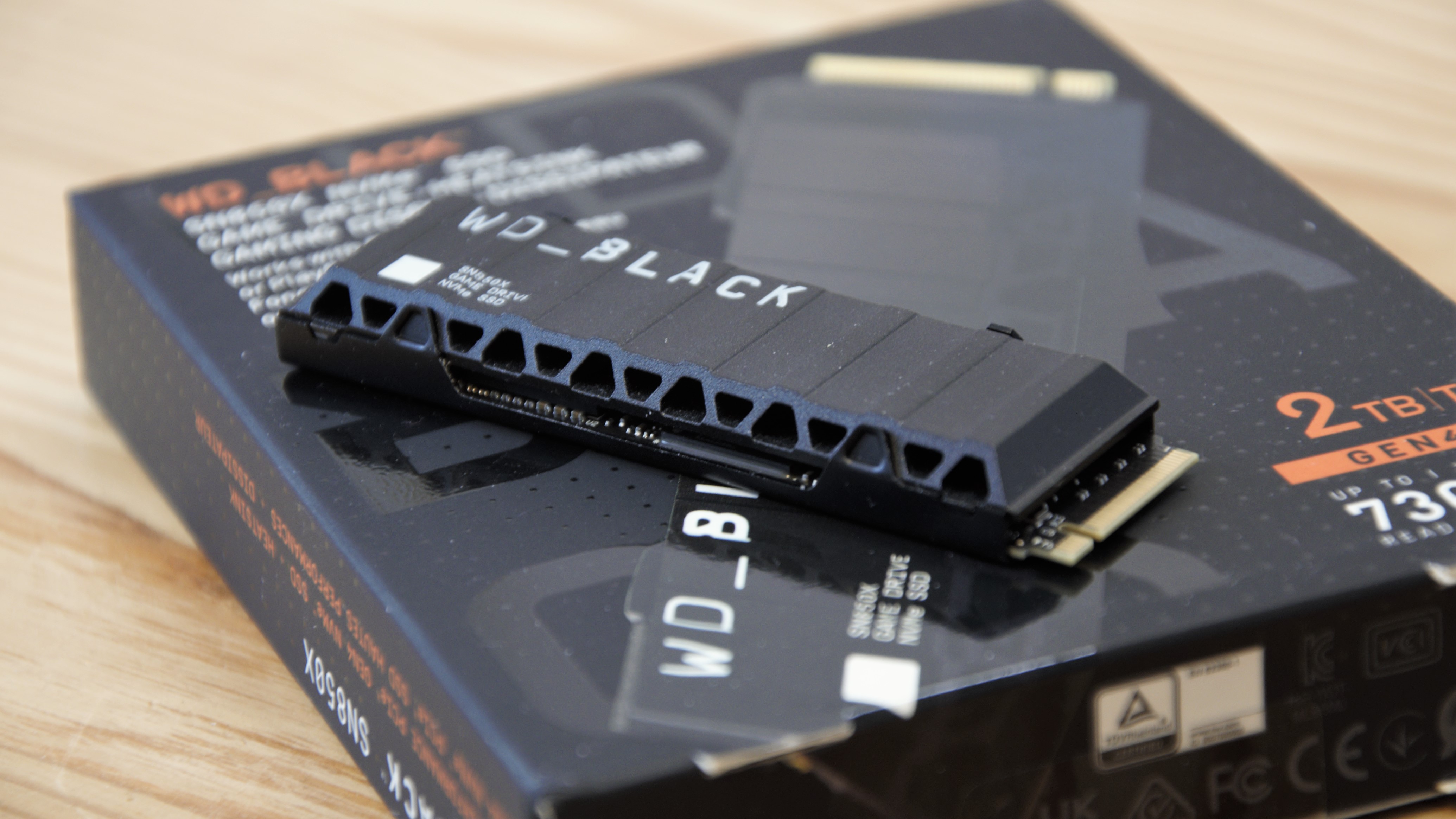 It’s not the most affordable PCIe 4.0 drive but it’s easy to see why the SN850X is a successful successor to the SN850.

The drive now comes in up to 4TB and there’s a clear boost in performance with 7,300MB/s read speeds with write speeds not far behind. It’s compatible with PC and PS5 but there are some caveats.

Although the drive has a stylish heatsink, this is not available on the 4TB option making it a no go for PlayStation 5 owners who want that much space. You’ll also want to avoid paying the full RRP and not that hardware encryption remains awol. 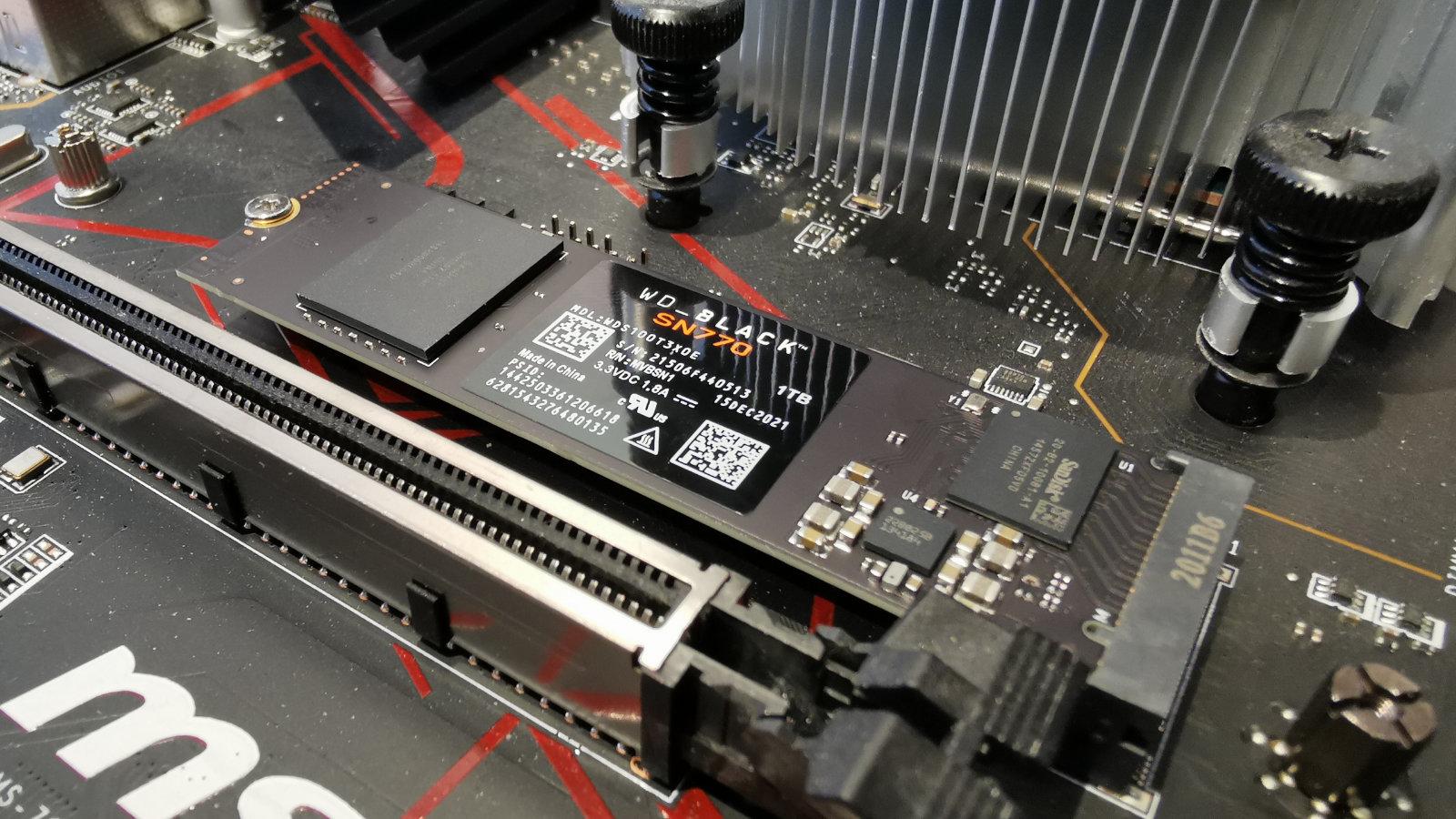 Although there’s no 4TB option and the 250GB model doesn’t represent good value, the other SN770 capacities make for a solid option for those wanting a cheap Gen 4 NVMe.

It’s very affordable and it offers decent performance overall making it a great option for a daily workhorse if you want to spend money elsewhere on your build.

There’s no heatsink option making it a no-go for PS5 users and there’s no hardware encryption either. Still, the SN770 offers good bang for your buck if you don’t have these kinds of tick boxes. 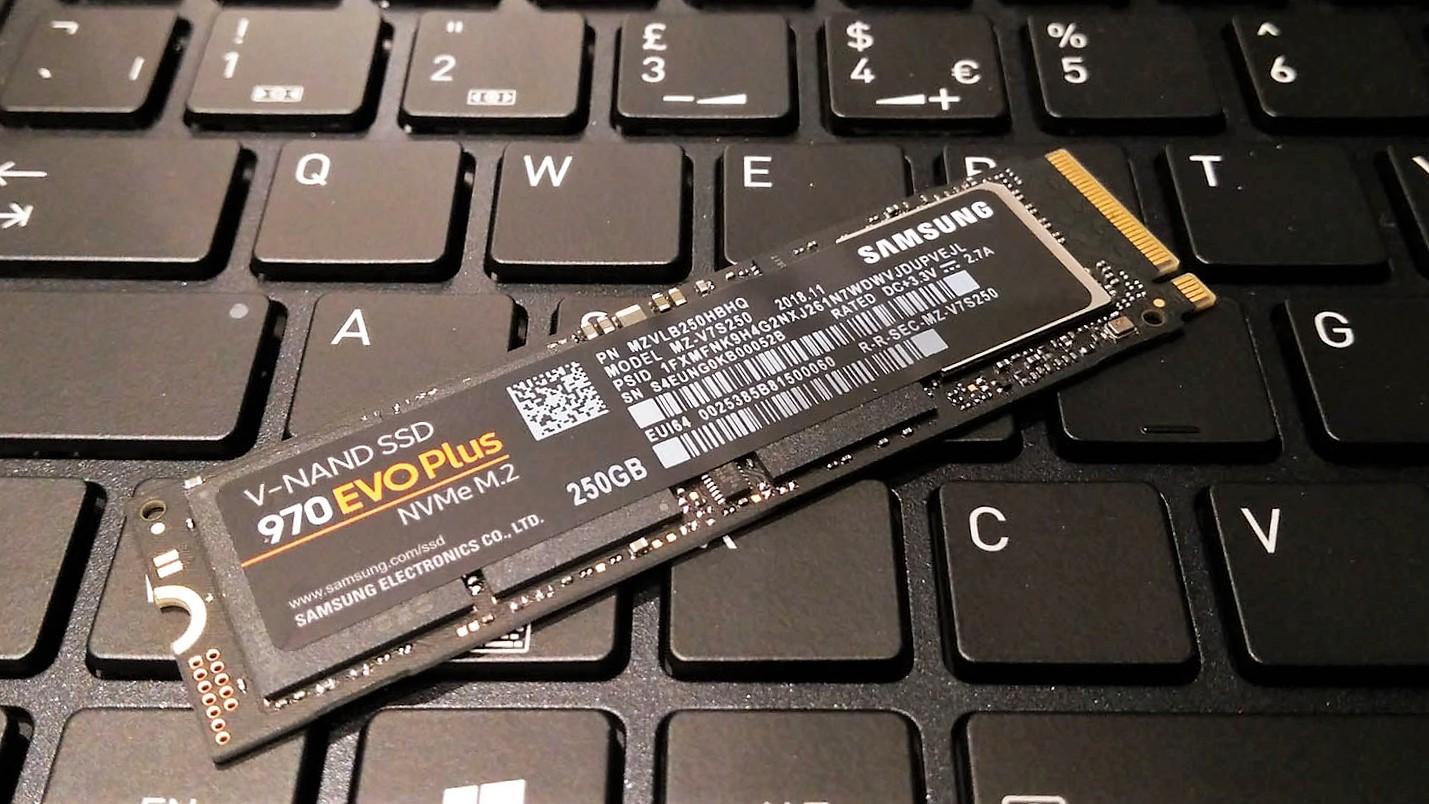 The 970 Evo Plus is an unusual addition to Samsung’s SSD range, but a welcome one nevertheless.

It’s an even better version of the 970 Evo at around the same price so it’s really a no-brainer on that front. If it’s NVMe performance you want this Plus model is astounding.

However, the Corsair MP510 and Kingston KC2500 are cheaper making them better value if you don’t need the fastest performance at PCIe 3.0. 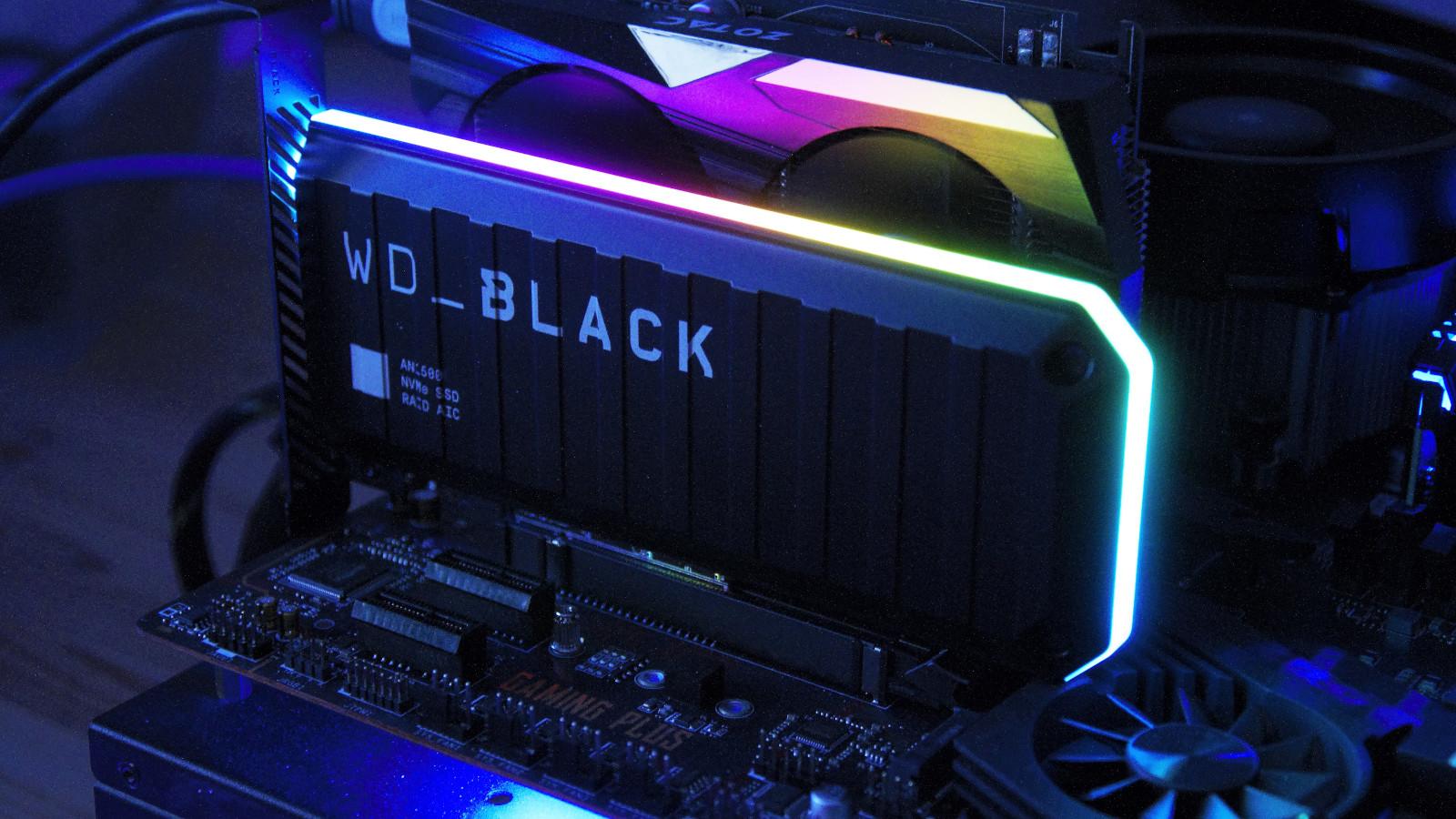 It might look like a video card without fans but WD has come up with a clever solution for those wanting NVMe performance but are lacking the M.2 slot normally required.

Not only that, but it offers better than PCIe 3.0 x4 performance, although you’ll need to be careful about where you plug it in due to PCI lane issues (read the review to find out more). Since there are two cards inside, you also benefit from RAID 0 striping.

The downside is you can’t switch to RAID 1 and there’s no encryption. It’s also expensive but could be cheaper than upgrading your motherboard to M.2.

What to look for in an SSD

For those seeking the very best performance, there’s still a case for finding the fastest rather than just choosing the cheapest SSD.

This is where you have a choice. There are two different types of SSDs: SATA and PCIe.

SATA is the type you’re probably most familiar with as it has been around for years and is used in PCs and laptops for hard drives and DVD drives. Most SATA SSDs are 2.5in wide as they’re designed to fit in laptops. But they’re also compatible with all recent PCs.

For laptop users specifically, you’ll want to also know the exact height of the SSD to ensure it will fit: some are 9.5mm thick rather than 7mm.

The other type is a PCIe SSD. It gets confusing because there are other acronyms and terminology too: NVMe and M.2. Put simply, PCIe (PCI Express) supersedes SATA because it is a much faster interface.

Most commonly you’ll see PCIe drives referred to as NVMe. This stands for Non-Volative Memory Express) but what’s most important to note is the form factor – the size of the drive – because that’s which determines if the thing will actually fit in your PC or laptop. They’re long sticks that look similar to RAM, only with the connector at the end.

This is where M.2 comes in. It’s a relatively new type of slot you’ll find on recent motherboards and in some laptops. Most M.2 SSDs are the 2280 type, which simply means 22mm wide and 80mm long. You can check your motherboard manual or contact your laptop manufacturer to find out if such a drive will be compatible.

Note: Just because an SSD has an M.2 interface does not mean it is an NVMe drive. You can buy SATA SSDs with M.2 connectors which will still be limited to SATA speeds, so watch out for this when buying. As we said, it can get a bit confusing.

If your PC’s motherboard doesn’t have an M.2 slot, don’t worry. you can buy a PCIe adapter card for around £15/$15. Some M.2 SSDs are sold with the adapter, such as Kingston’s KC1000. Or you can now get drives like the WD Black AN1500 which give you better than PCIe 3.0 performance without an M.2 slot.

PCIe comes in different versions like a lot of tech and while PCIe 3.0 is still the most common, PCIe 4.0 drives are now on sale – such as the Samsung 980 Pro. They are twice as fast but as is common with a new standard, the price is high and it’s likely you’ll need to upgrade other parts of your machine like the motherboard in order to get the most out of it.

Find out how to install an SSD in your PC.

It’s taken years, but we are now at the stage where an SSD is a truly affordable component for everyone. And if your budget will stretch to only £50, you can still get Crucial’s MX500 (reviewed below) for under £45 from Amazon or the jump to NVMe with the Corsair MP510 at only £43.

Sure, you get much more storage if you buy a traditional hard drive for the same money, but if you have a PC you can always install Windows and your most-used programs on an SSD and keep your music, video and photo libraries on a huge hard disk where performance isn’t as important.

How much space do I need?

Of course, the 250GB size of SSD (although you can find smaller) is going to be the cheapest and therefore the most tempting.

However, there’s nothing worse than getting a notification of your drive being full, resulting in lots of admin to sort out what to keep, delete or move. Also be careful for when smaller drives have worse specs.

So carefully consider what you’re going to need the drive for. If it’s just for the operating system and a few applications then 250GB will be fine – especially if you’re going to have another drive for storing files.

However, if this is going to be the only drive in your machine and you’re going to be storing lots of applications, files and games then you’ll need to go for more. 1TB will obviously cost more but will be necessary.

Getting back to performance, this has effectively plateaued among SATA SSDs. It’s not that flash memory has reached its limit, it’s that they’re hitting the limit of what the SATA interface is capable of.

Really, you should only use a SATA drive if you have no other choice.

What about MLC, TLC and SLC?

There are various memory technologies used on SSDs, from multi-level cell (MLC), to the cheaper triple-level cell flash (TLC) architectures. You might even come across the rare and most expensive single-level cell (SLC) drive. The differences between the cell technologies boil down to the amount of bits (data) that a single cell (within the SSD) can handle.

TLC handles three, MLC two, and SLC one. The greater the number of bits per cell, the increased likelihood of failure, inconsistencies and – most importantly – performance. However, as this is a general sweeping statement, manufacturers have found ways around the limitations of SSD technology.

When buying an SSD, look out for long warranties and high write limits (expressed as a TBW value) if you prize data integrity, although with the help of proper backup routines, data loss isn’t really an issue today.