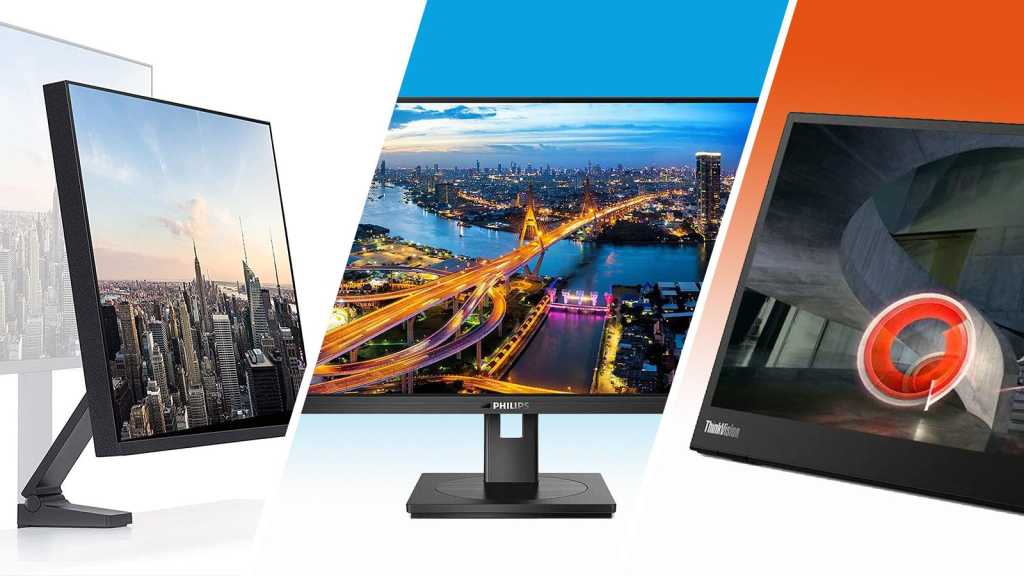 Monitors come in a huge range of sizes, resolutions and panel types making them a tricky purchase to get right. We’ve reviewed and ranked the best ones and you can read our full monitor buying guide after the chart for advice on which to buy.

Before we get into the buying advice and your options, here’s a top tip: display technology does not move on at the same pace as a lot of consumer tech and, as you’ll discover in our round-up, you’ll often find better value with slightly older monitors.

If you are a gamer then check out our best gaming monitor chart.

As well-rounded monitors go, it doesn’t get much better than the excellent Philips B1.

It starts with a stylish design with a very versatile stand meaning you can adjust the monitor into a wide range of positions easily. Build quality is very good, too.

Add in a high-quality 24in IPS display and you’ve got a nicely balanced monitor for your home office. The highlight here is the USB-C connectivity and built-in docking station meaning you can quickly connect or disconnect a laptop with minimal hassle.

The only downsides are slightly limited brightness and weedy speakers.

Read our full Philips 243B1 review 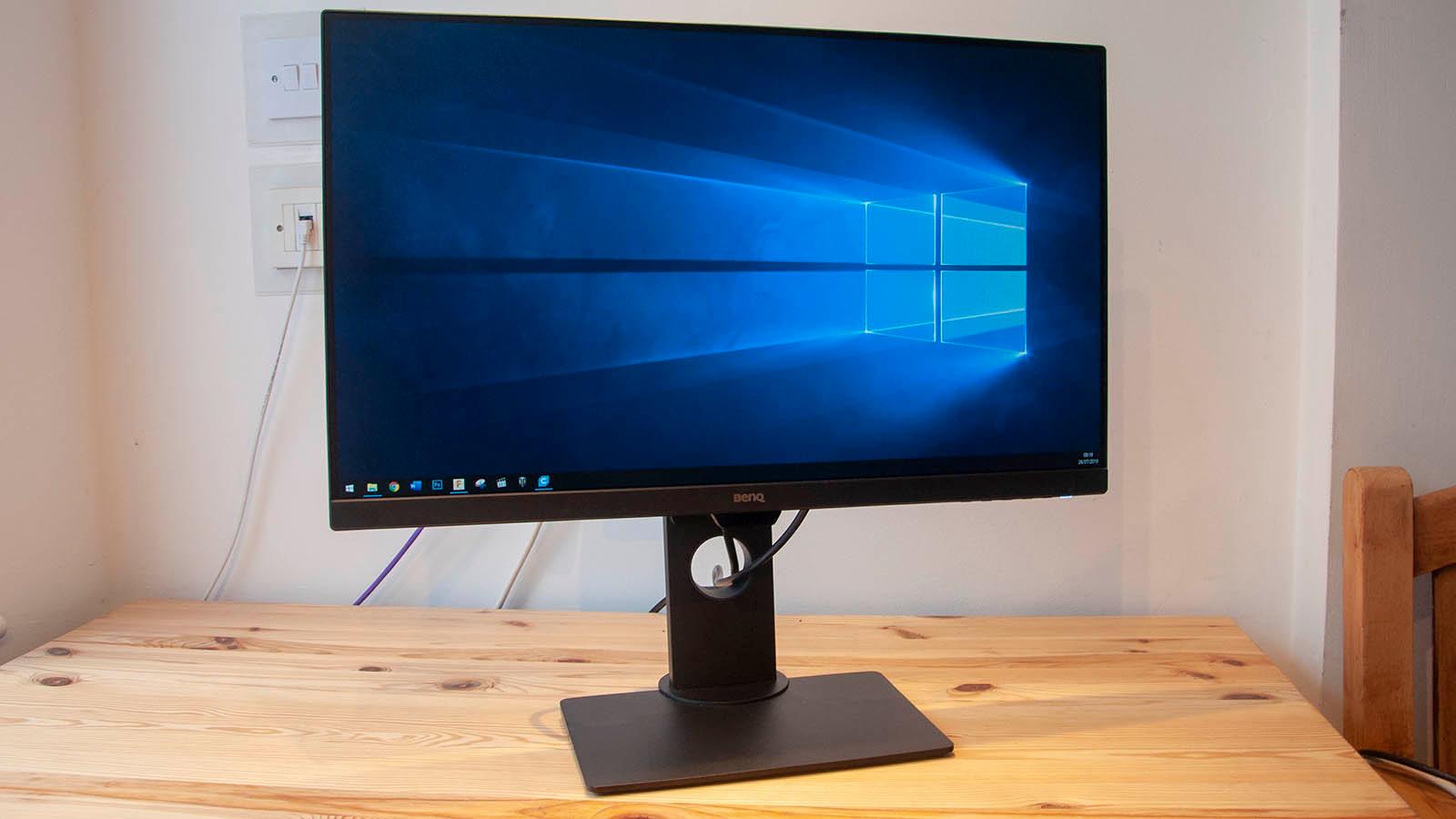 If you’re looking for an affordable but still decent monitor for business or home office then the 27-inch, 4K BenQ BL2780T is a great option.

These types of monitors tend to be extremely dull but BenQ provides a good pinch of style in the mix here. There’s a good level of adjustment here, including portrait mode, and the power supply is neatly built-in avoiding an annoying brick.

If you don’t need a resolution higher than Full HD then the BL2780T offers excellent performance with various bits of eye comfort technology, good brightness and even 99% sRGB gamut. 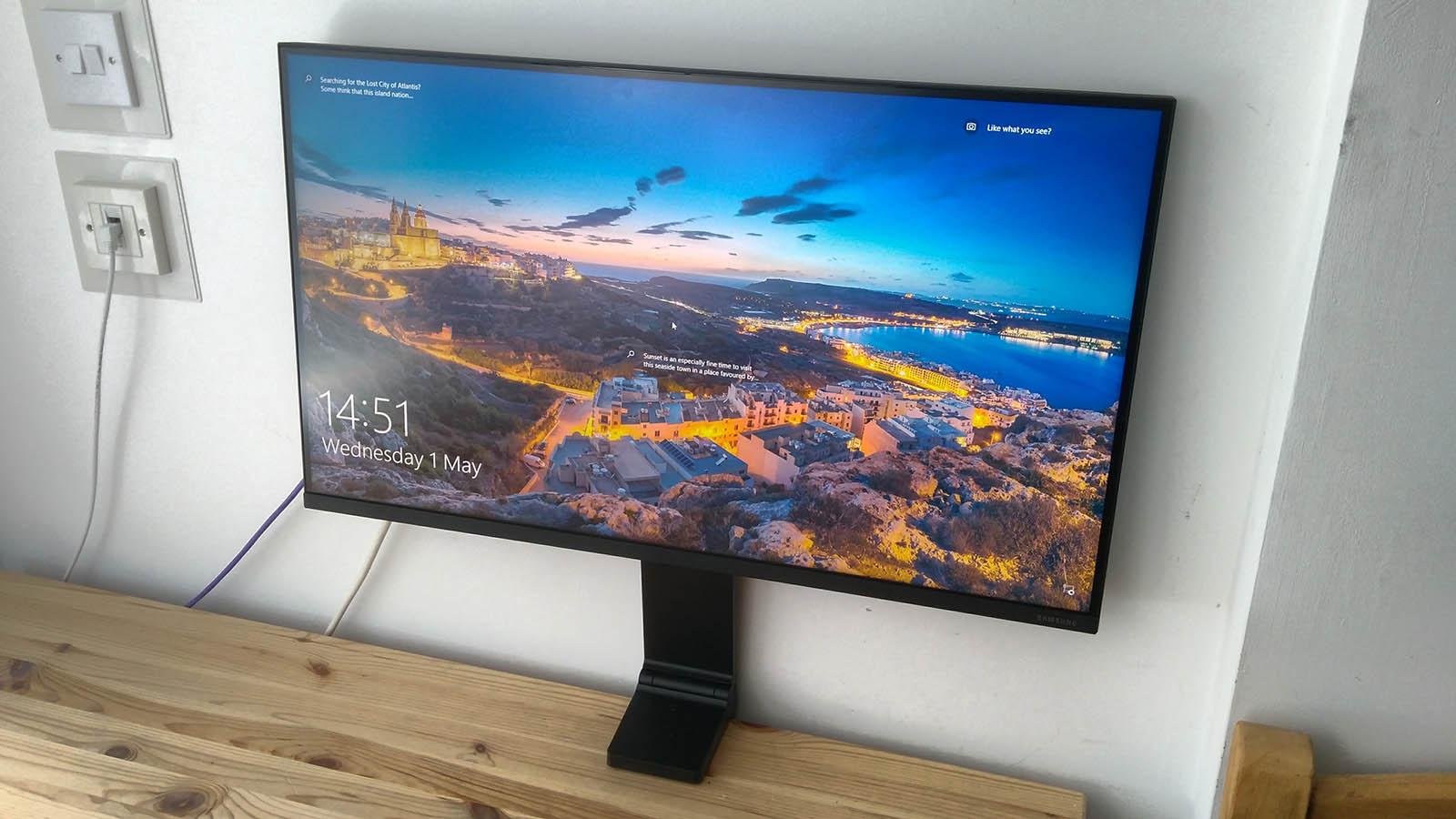 MSRP: From $399.99
Best Prices Today: Not Available at Amazon

There are pros and cons to the 27in Space Monitor.

If your desk is short of space this is one of the only monitors on the market that really solves the problem. However, it does so without offering a large amount of adjustment – there’s only tilt here and no USB hub either which doesn’t make sense.

If you’re using wireless peripherals and the adjustment is ok for your desk, then the Space Monitor is excellent and is available at a decent amount below the RRP.

The panel itself is top-notch with the 4K VA technology providing a crisp and vivid image that will be suited to a wide range of tasks. Namely creative work but you could also use it for gaming. 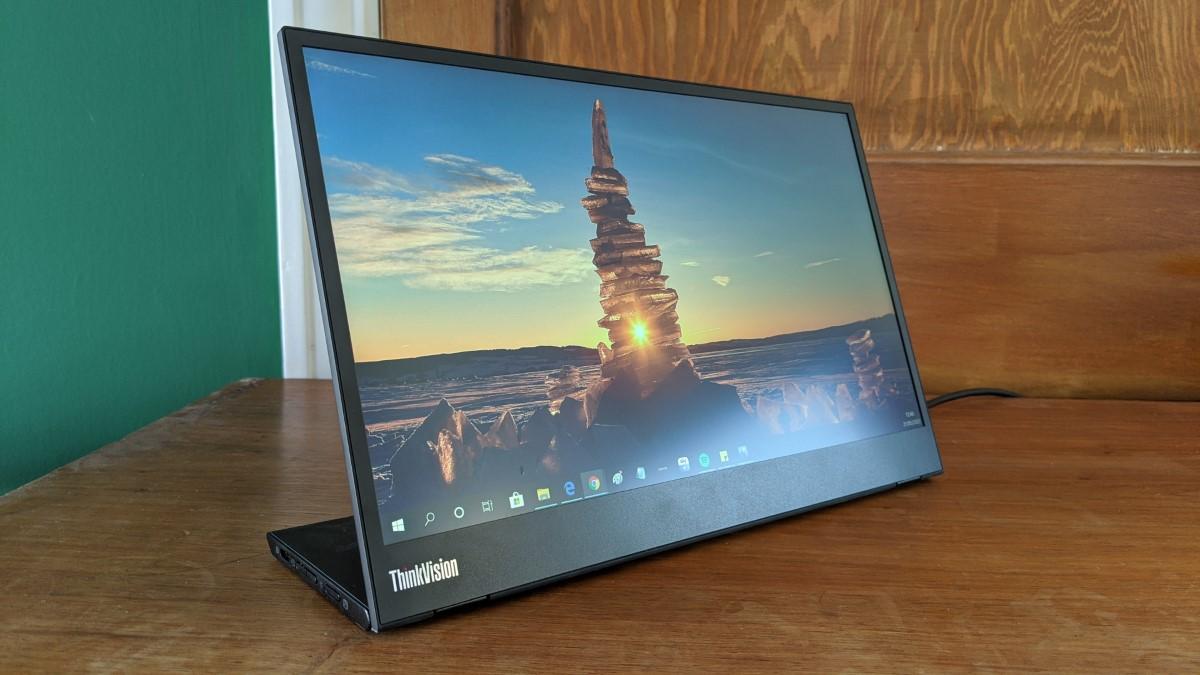 Those looking for a portable monitor should seriously consider the ThinkVision M14.

Lenovo has made sure this 14-inch display does exactly what it’s supposed to and is a versatile second screen for wherever you are – at home or on-the-go. It offers a compact and lightweight design that’s surprisingly stylish with a high-quality Full HD IPS screen including a handy low blue light mode.

The buttons are fiddly but this is a minor point as you won’t need them very often anyway. You really just need to make sure USB-C connectivity is suitable for you. 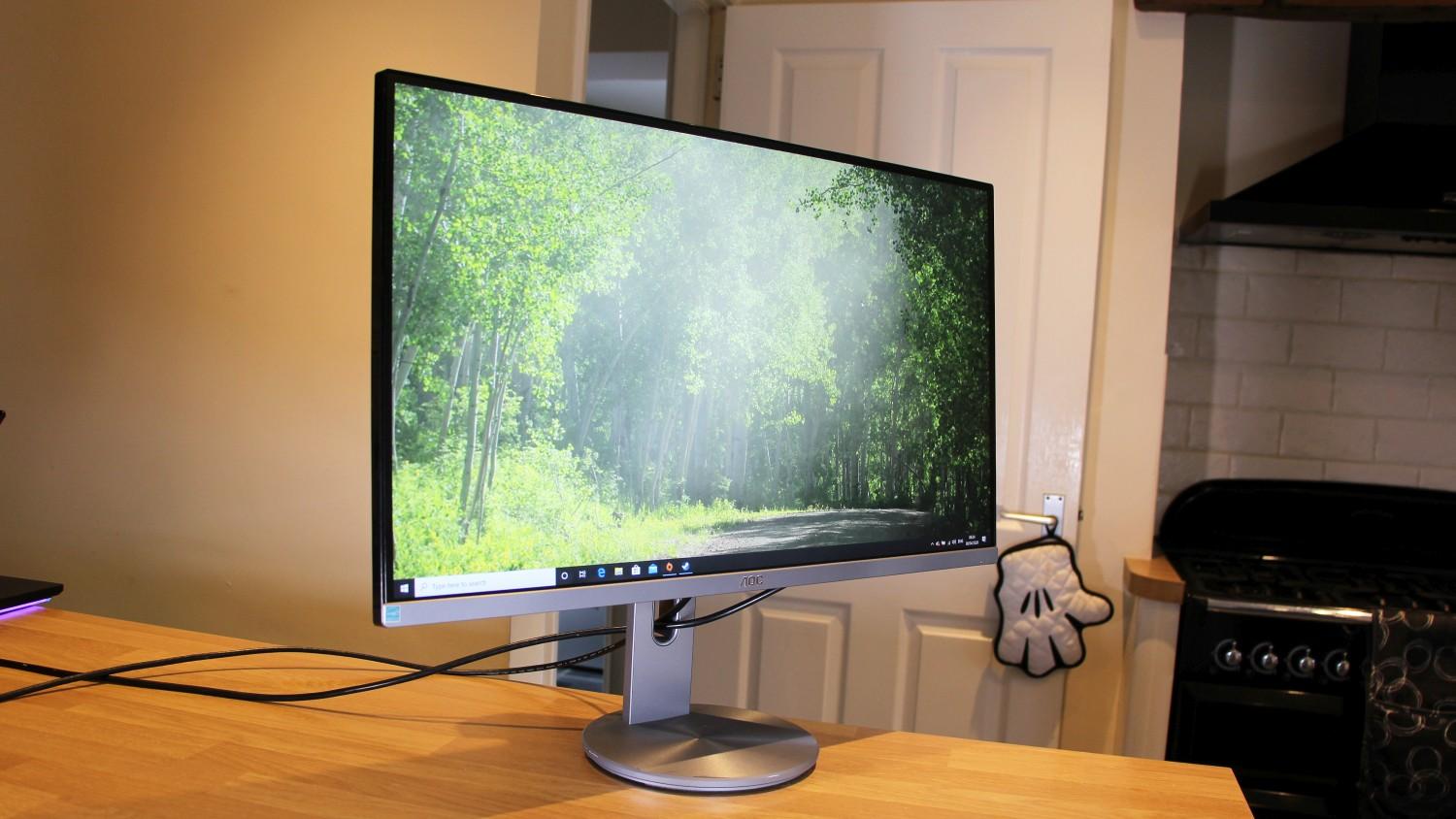 If you’re looking for an affordable 27in 4K monitor that’s also stylish then the AOC U2790PQU is a solid option.

It’s well-made and looks good and offers solid colour accuracy to go with its crisp resolution. The majority of tasks will look great on it but it’s not perfect.

For those needing it for higher-end, demanding tasks, the contrast and uniformity being a little off might cause you to look elsewhere. The Q2790PQE is a cheaper option if QHD resolution is enough. 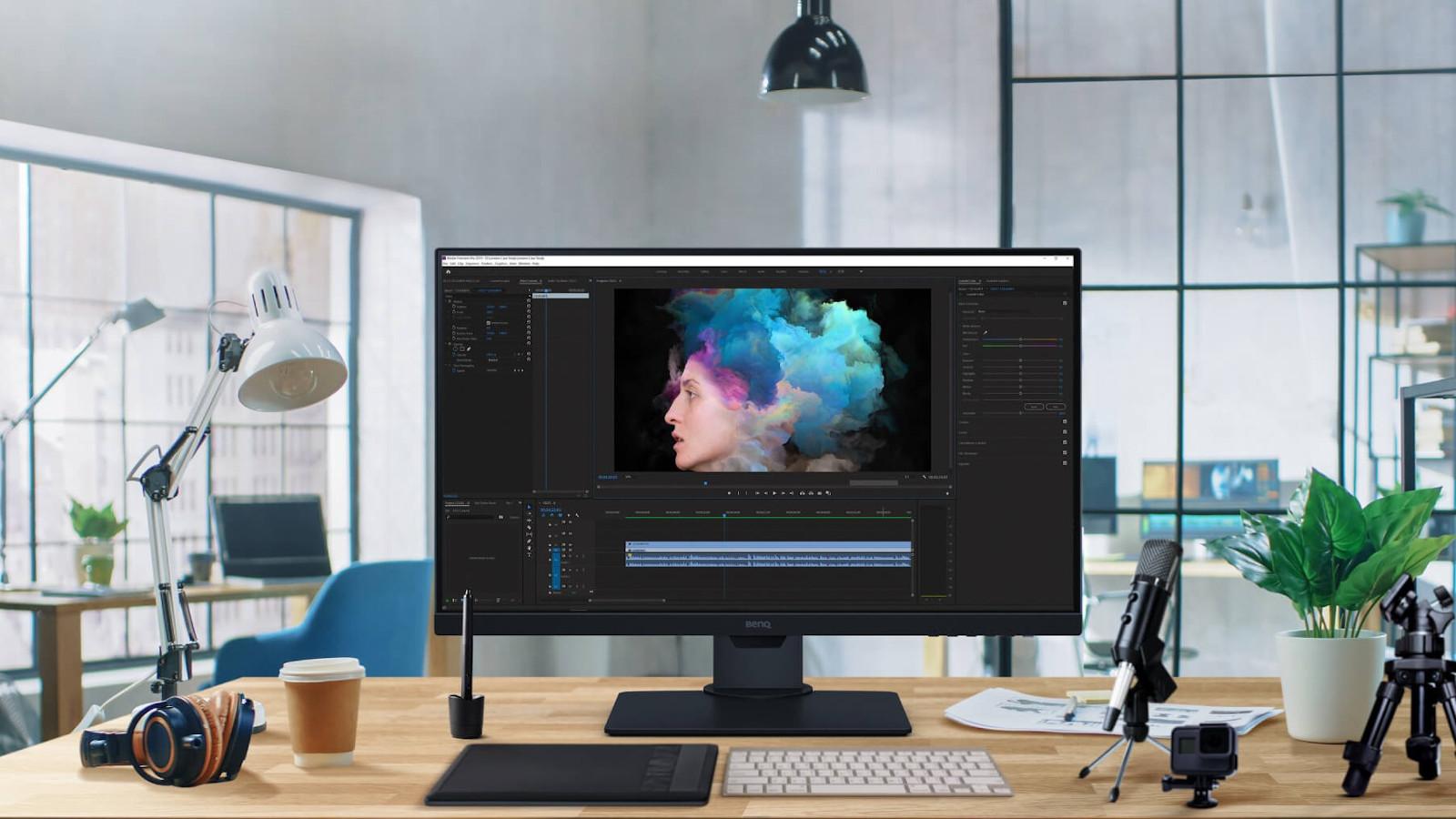 The PD2705Q isn’t a great choice for gamers or movies watchers but as the DesignView name suggests, this monitor is one that BenQ has created with creators in mind.

It’s CalMAN Verified and Pantone Validated as well as an M-Book mode for those connecting a MacBook for colour matching the two displays. There’s 100% sRGB and 88% of P3 colour.

Furthermore, is a built-in KVM so you can connect your mouse and keyboard to the monitor and a stand offering various adjustments. 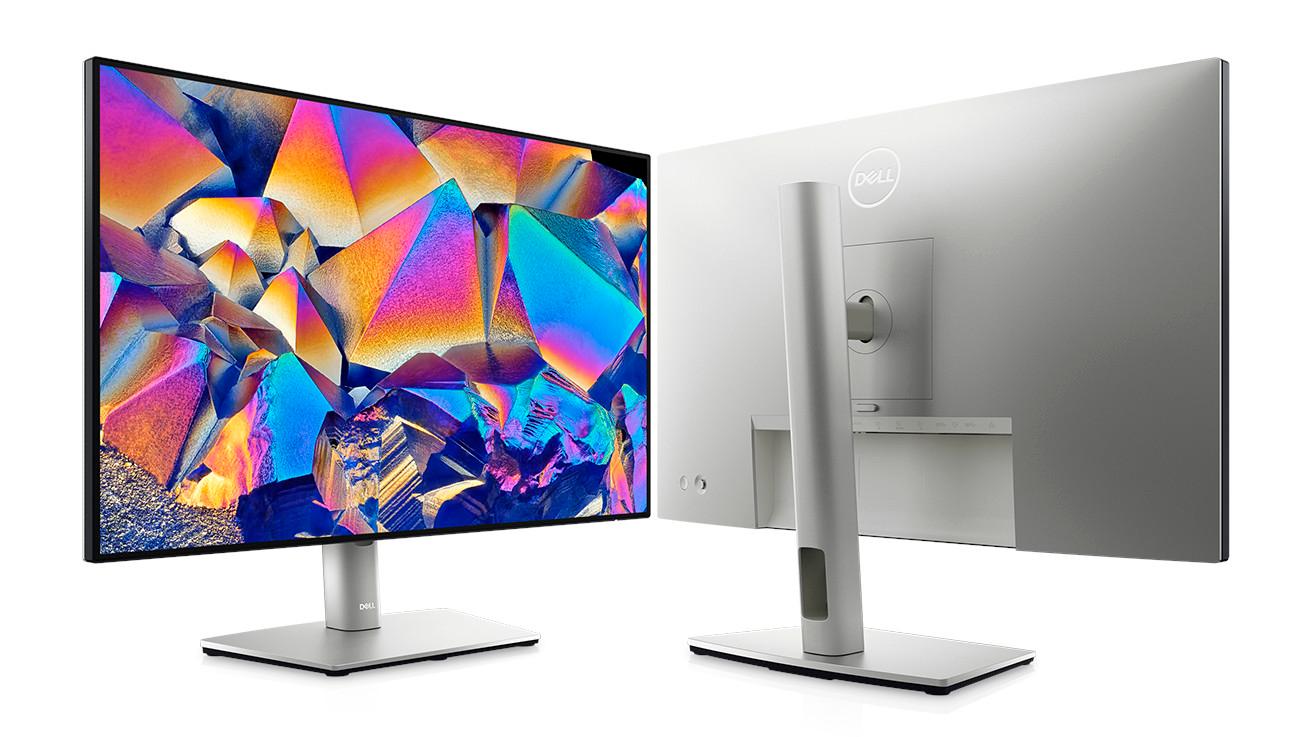 Working from home is the norm now, even if it’s just for a few days a week having a monitor that’s made for laptops will be a real boon for some.

The Dell Ultrasharp U2421E is exactly that and although you could spend less and daisy-chaining two doesn’t make sense vs an ultrawide rival. If this size is good then there’s a lot to like with its high-quality design and features.

A built-in USB-C hub means you can simply plug your laptop in with a single cable avoiding the need for a separate docking station. There’s good stand adjustment along with solid brightness and colour, although it’s not suitable for AdobeRGB design work. 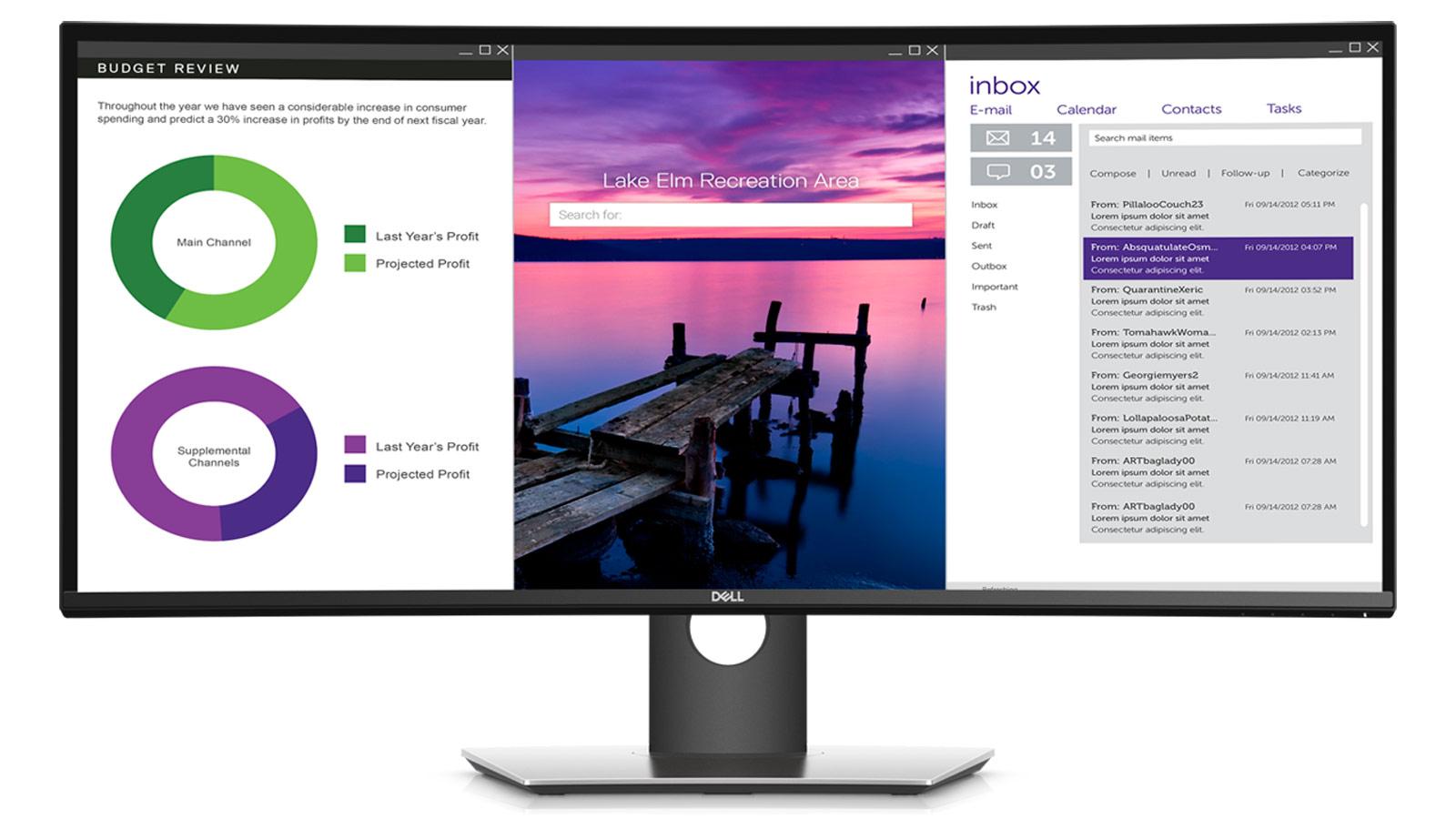 Ultrawide displays can replace two smaller monitors and give you an uninterrupted desktop.

Dell’s curved 34in offering is very expensive, but offers top-notch quality, accurate colours, a Quad HD resolution and a USB-C port for connecting the latest laptops.

The Huawei MateView is an unusual monitor and the result is that it will be great for some people, and not others.

It’s certainly one of the most stylish around and offers great build quality, too. There’s also a useful integrated USB hub with USB-C included.

The screen performance is decent with plenty of brightness and excellent colour reproduction. Meanwhile, the 3:2 aspect ratio will be more suited to those doing work like word processing.

Limited adjustment of the screen is odd and the controls are a little clunky too, but you probably want to decide on the MateView based on whether you can and will make use of the built-in OneHop wireless projection. Otherwise, the regular model will do just fine.

How to choose a monitor

Size is probably going to be your first concern. It used to be the case that small meant cheap, but these days even 24in panels can be considered affordable. Our general rule is to go small only when space is at a premium.

The majority of modern monitors feature slim designs, with virtually bezel-less frames and decent backlighting technology. This makes it easier than ever to experiment with a multiple-monitor setup, keeping that gap between each display to a minimum – ideal if you’re working from home and battling with large spreadsheets and multiple open windows.

We’d advise looking for a fully adjustable stand so you are able to easily position the display at a comfortable height. If you’re going to spend hours staring at the thing, your body will thank you for maintaining a decent posture.

There is no comparison between 4K and Ultra HD, they are the same thing – two different fancy marketing terms for the same measurement of resolution.

Screen images are made up of thousands of little dots, known as pixels, and resolution is simply a measurement of how many dots make up the picture. Resolution is therefore associated with the clarity of text and images on the screen.

The cheapest monitors will have Full HD resolutions of 1920×1080 pixels. Ultra HD or 4K displays quadruple this resolution to 3840×2160 pixels and thus are able to provide a much clearer image. You can also opt for something in between with Quad HD at 2560×1440.

Note that there are many more resolutions out there due to various aspect ratios beyond the typical 16:9 including ultrawide monitors.

While 4K TVs have become significantly cheaper over recent years, 4K computer monitors can still be expensive. But if there’s room in your budget to go all out on the resolution you won’t be disappointed: you’ll be able to see more detail in photos, stream super-high-quality 4K video, and get more realistic graphics in games. 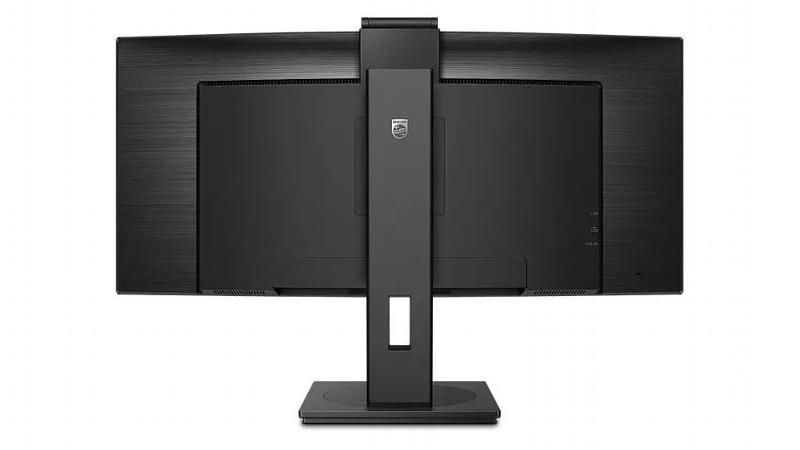 If you are looking at older monitors, you may still come across some TN (twisted-nematic) rather than the more modern IPS (in-plane switching), PLS (plane-line switching) and AMOLED (Active Matrix Organic Light Emitting Diode) options.

TN panels tend to be cheaper and can offer the very fast response times demanded by gamers, but they may also come with restricted viewing angles, reduced brightness and less vibrant colours.

Creatives will much prefer the greatly improved colour accuracy of IPS and PLS, while AMOLED is a great choice for entertainment with its rich contrast and punchy colour palette.

Refresh rate is also something to consider if you want to also use it for gaming, too – aim for 120Hz if you can. We have a dedicated gaming monitors chart but some monitors here might also be suitable for gaming.

Display manufacturers tend to over-exaggerate some specifications, thus brightness and contrast measurements are often more believable when obtained from independent reviews and paired with analysis on real-world performance.

Low brightness (anything below 200 nits) is mostly a problem in overly bright or dark rooms, and when contrast is also very poor. As long as contrast is above 500:1 you should be able to easily differentiate between the very brightest and darkest images a screen can display.

Colour gamut, the spectral spread of reproduced colour within our perceptual limits, is typically expressed in terms of how complete is a monitor’s coverage of standards known as sRGB and Adobe RGB. Both are good indicators of performance, but the latter a slightly more challenging spec that gets closer to the vast range of colour the human eye can appreciate.

Colour accuracy is concerned with reproducing the exact hue as intended. Deviation from true colour fidelity is represented by a Delta E figure, with lower numbers better. Close to or below 1.0 is a good achievement.

Gamers are most likely to require a fast response time, measured in milliseconds (ms). 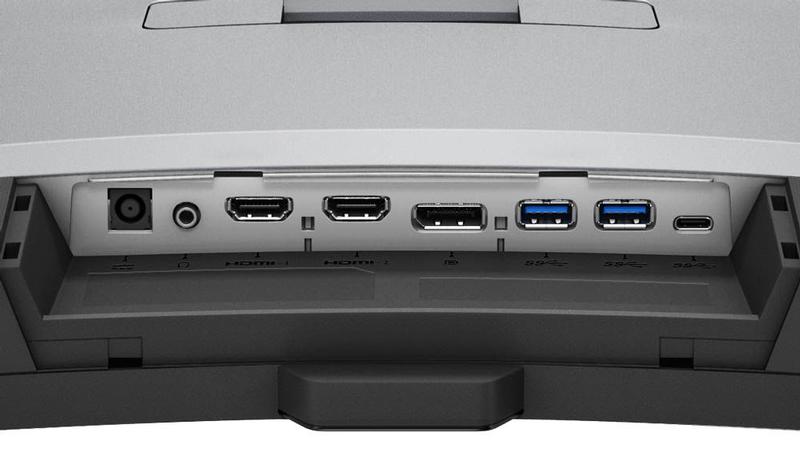 All the monitors we’ve reviewed have at least two inputs, which determine which and how many peripherals you can connect. Some monitors still feature ageing VGA connectors, but we’d advise concentrating on digital inputs such as DVI, HDMI and DisplayPort. The latest models may also feature USB-C or Thunderbolt connections for power/charging and data transfer.

Chief among your priorities should be HDMI and DisplayPort, which are able to carry both digital image and audio information over a single cable. DisplayPort is a better choice for 4K monitors or those with high refresh rates and is increasingly common on Macs and Windows PCs, but less so on home AV equipment.

HDMI with MHL support will enable you to mirror the screen of a connected Android phone or tablet, but today you also have wireless options for achieving this. Find the best HDMI cables.

DVI is a high-quality digital video input and popular with gamers for its lower latency, but it doesn’t carry sound. Some monitors offer ‘dual-link DVI’, which allow two DVI streams through a single connector.