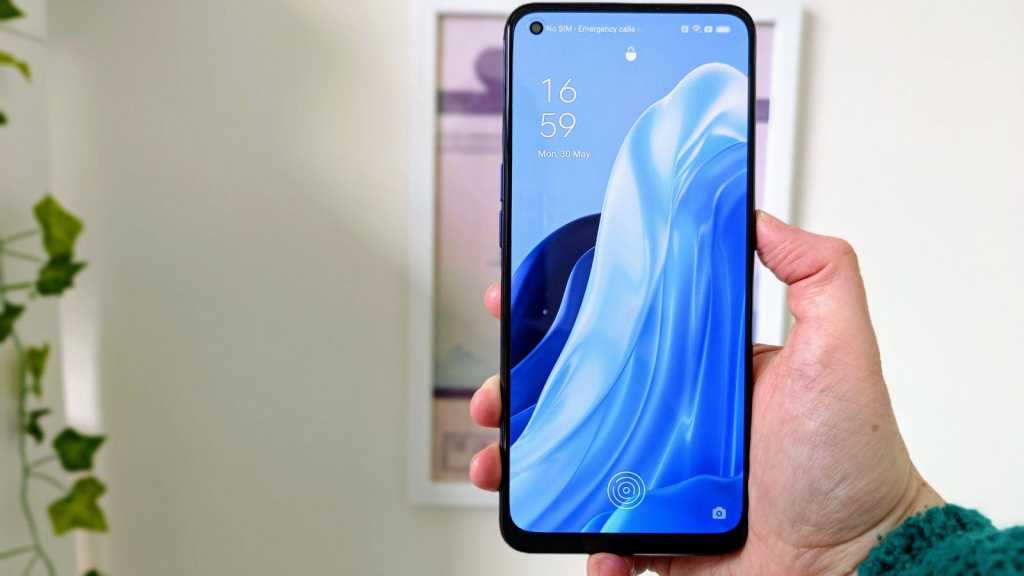 The Oppo Find X5 Lite has a mixed camera set-up and ships with the older Android 11, but there is still a lot to love about this mid-ranger.

Oppo has three phones in its Find X5 range and the Find X5 Lite is the cheapest handset of the bunch. However, make no mistakes. This mid-ranger still has a lot going for it, including a bright 90Hz display, long battery life and 65W wired fast-charging.

But with the Find X5 and X5 Pro staying ultra-competitive in the flagship range, how does the Oppo Find X5 Lite hold up against other mid-rangers from the likes of OnePlus and Realme?

Those familiar with Oppo phones will see the design of this phone is a re-branded version of the Oppo Reno 7 5G, which was only released in China and India. Oppo is known releasing the same phones under separate names for different markets. 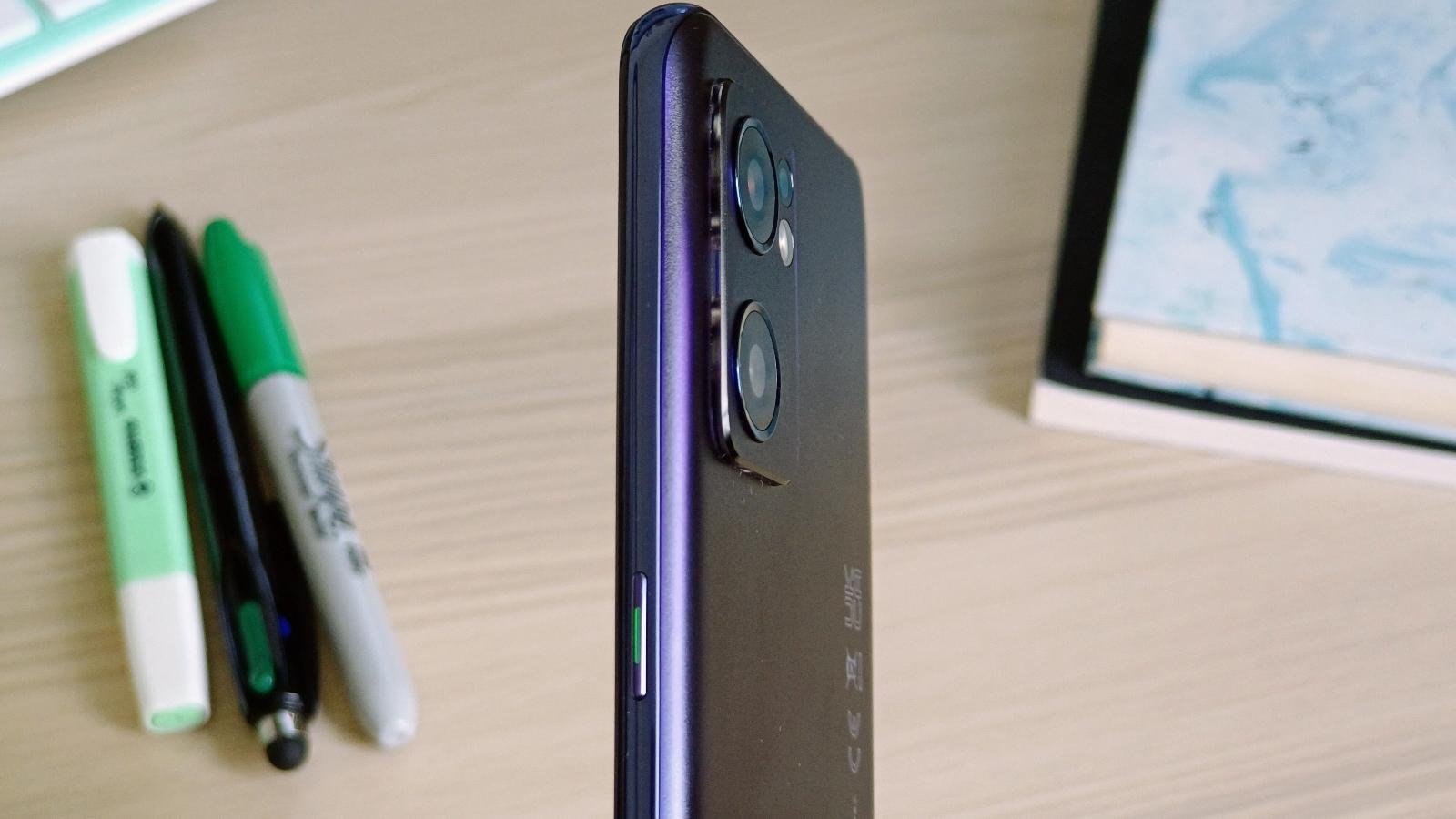 The phone comes with curved edges and a plastic rear back. You can get it in a choice of two colours: Startrails Blue or Starry Black. I tested the latter, which is more purple than black, with a gradient, shimmery finish. At a weight of 173g and a thickness of 7.81mm, it is slim and fits into larger pockets and small bags with ease.

Because it does not share the same design language as the other handsets in the Find X5 series, the camera module is rectangular rather than curved and does not connect to the phone in the same way. That aside though, the finish still looks clean and feels more expensive than what the phone costs.

The phone comes with a USB-C port, as well as a headphone jack and a dual-SIM port which also doubles as a microSD slot. Unfortunately, the phone does not have an IP rating, so it is more vulnerable to dust and water damage than other phones. 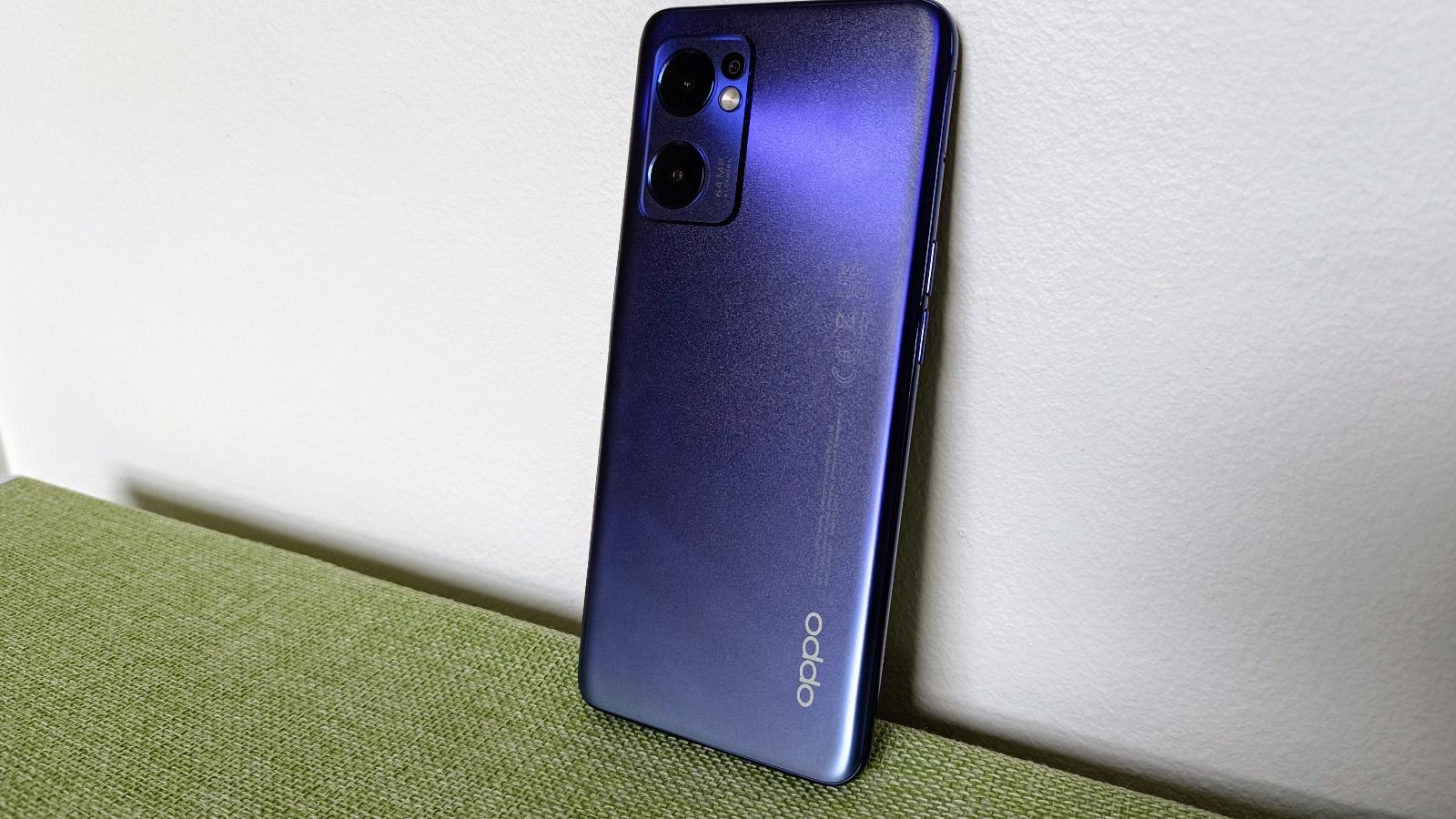 The Oppo Find X5 Lite comes with a 6.43in AMOLED screen, with a punch hole camera that sits on the top left-hand side. The phone has an 84.9% screen to body ratio, making the display largely uninterrupted.

With a maximum brightness of 800 nits, the display is excellent and clear even under direct sunlight. There is an under-display fingerprint scanner, which I only had issues with after just washing my hands.

You can toggle either between the higher 90Hz refresh rate, or conserve battery power by using the standard 60Hz one. The phone automatically defaults to the higher option out of the box.

There is no variable refresh rate on the Oppo Find X5 Lite, which more expensive phones have and use to conserve battery life when the top refresh rate is not needed for what’s on the screen. You can also find 120Hz on phones of this price range. 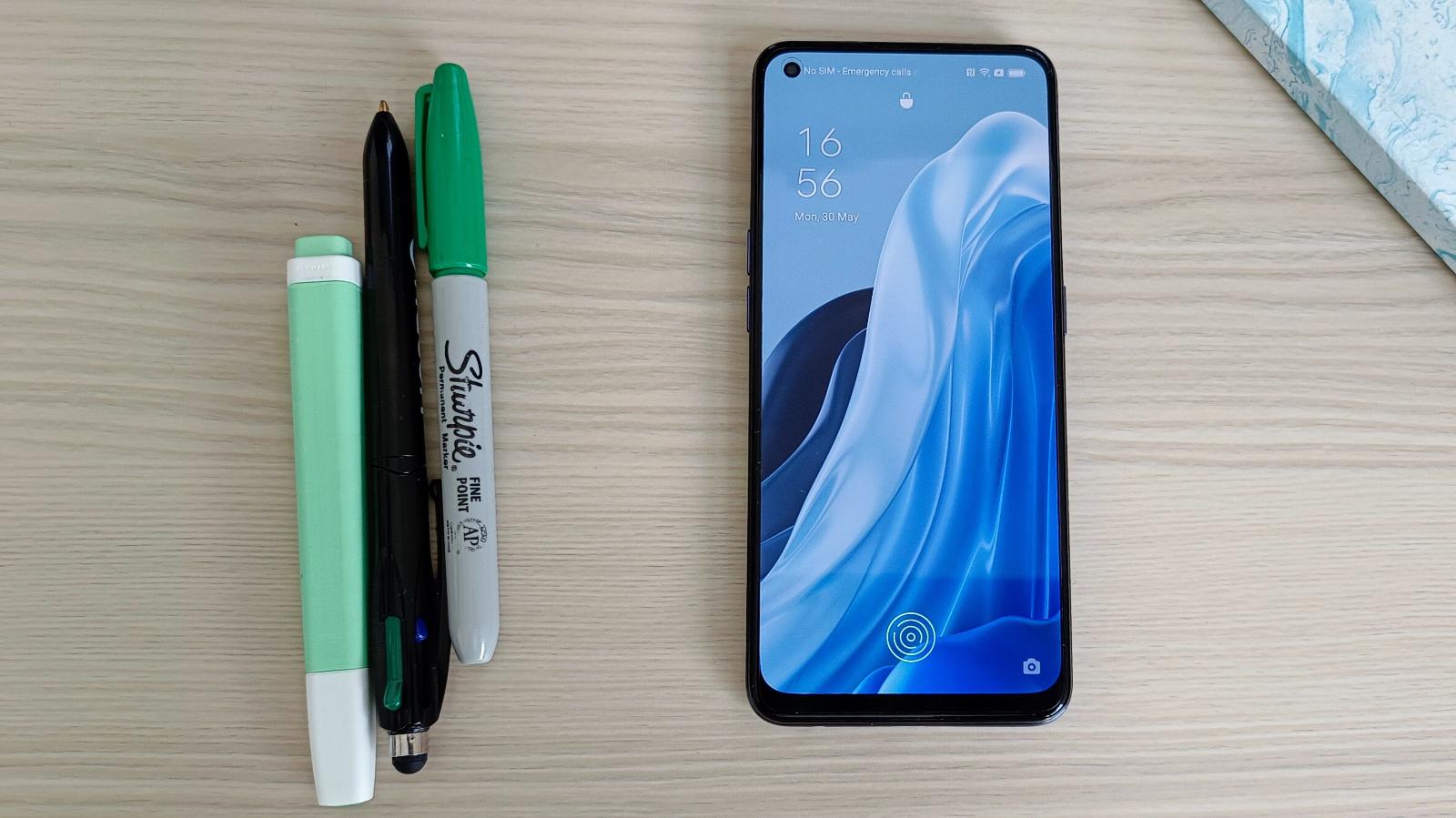 The phone is only fitted with a single speaker on the bottom edge of the frame. This means that the audio sounds tinny and lacks the power that you will find on handsets fitted with multiple speakers and audio software. It is loud enough for listening to videos and podcasts, but music lacks clarity and depth.

The Oppo Find X5 Lite comes packed with a MediaTek Dimensity 900 chip, which is paired with 8GB RAM and 256GB of expandable storage – this is the only configuration the phone comes in.

This processor does not deliver the same flagship-killer levels as what you will find on the OnePlus Nord 2T. However, it is still plenty capable. See how it performed in our benchmarking tests below:

Day to day, this translates to fast performance with minimal stutter, even when multitasking between different apps. Of course, if you want something that is capable of heavier duty tasks like gaming with high graphics, then you will have to consider opting for something more powerful.

The Oppo Find X5 Lite has the same connectivity support seen on other phones in the range: 5G, Wi-Fi 6, Bluetooth 5.2 and NFC. 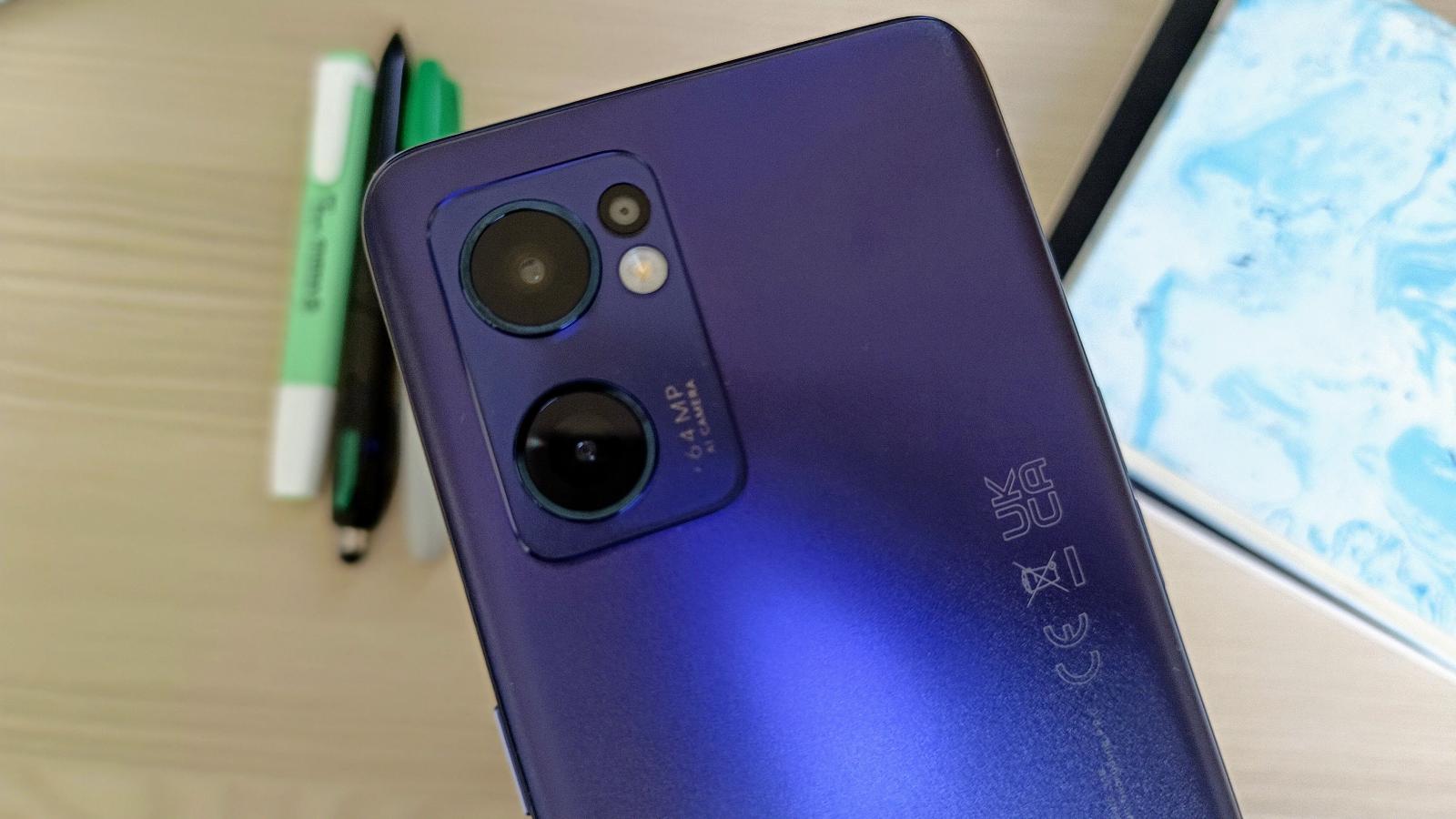 One of the key differences between this phone and the rest in the Find X5 range is that it does not feature Oppo’s dedicated Marisilicon X NPU, a chip the company says improves image processing. Instead, the X5 Lite boasts a camera made up of three lenses, led by a 64Mp main with a f/1.7 aperture.

Textures on the main 64Mp lens look great, both indoors and outdoors, and it captures motion shots (such as moving water) pretty well. Though colours are bold and bright, the HDR mode on the Oppo Find X5 Lite can sometimes make colours appear a little less true to life – especially green tones. 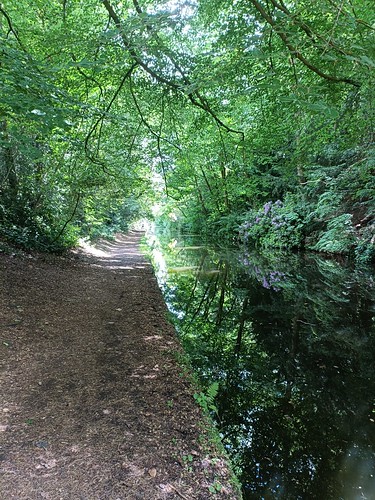 The 8Mp wide-angle lens loses some details on images and makes them appear slightly distorted in appearance. I would only resort to this sensor if you needed a big travel shot, or if you are trying to get a snap with a lot of people in it.

There’s no telephoto lens here so all zoom is digital. You can keep some details of images up to 5x zoom but beyond that any details start to look blown out. The macro mode on the camera can capture some details close up, but like many other phones of this price point, it can take a few goes to get a decent shot without optical image stabilisation on the lens.

Whilst the night mode does lift colours on the camera, it is not as effective as what I have seen from other phones such as the Realme 9 Pro+. It also takes a long time, which means that if you are prone to shaky hands, the final image can come out blurred. 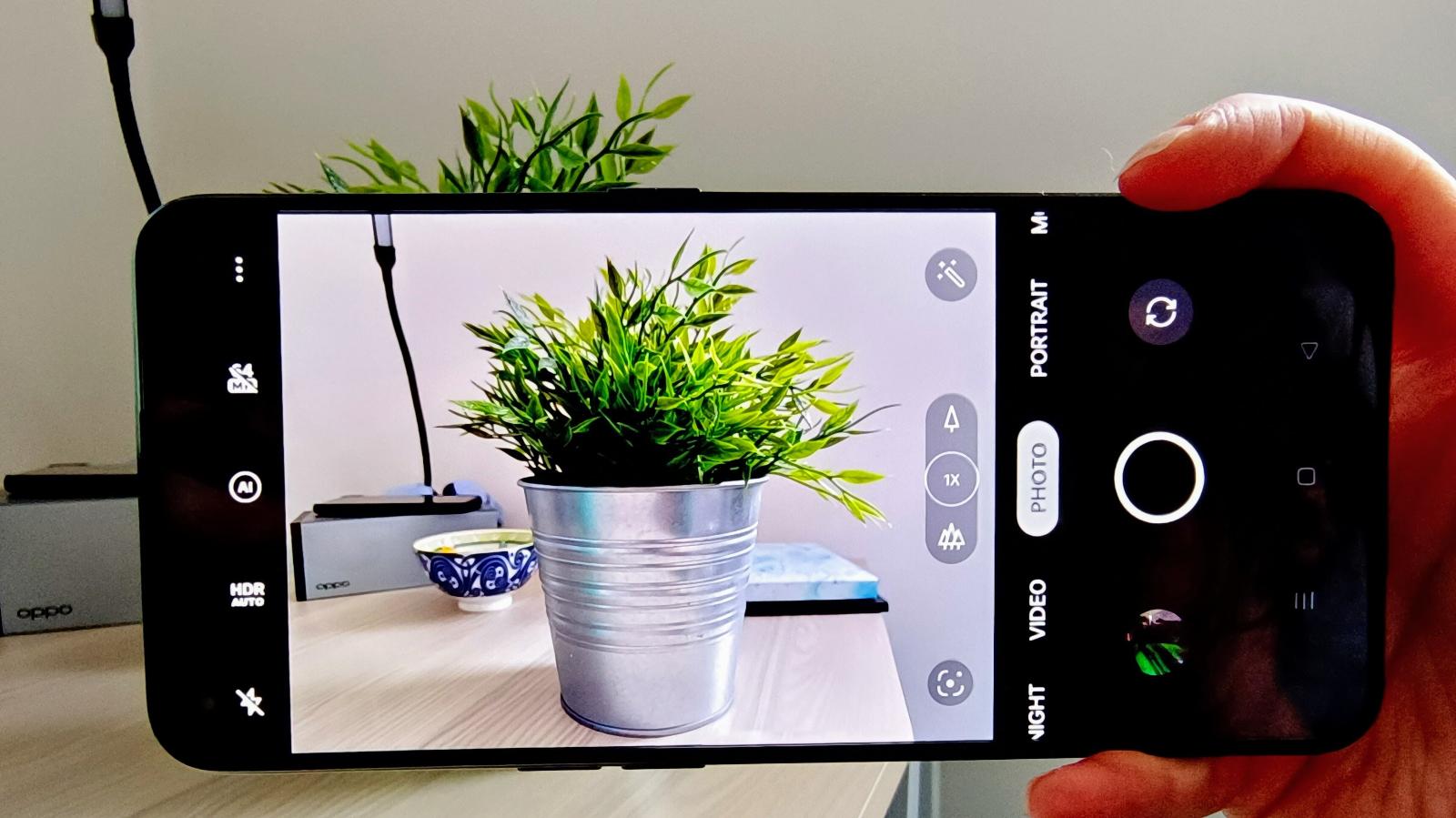 The 32Mp front-facing camera preserves details and colours well. You can adjust the strength of the bokeh effect on a sliding scale, though I found small hair textures got lost in the blur above anything higher than the middle setting. For the most natural effect, I recommend keeping the blur to the a minimum.

Video wise, the Find X5 Lite can shoot up to 4K and 30fps, or 1080p at 60fps. The AI highlight mode helps if you are shooting in low light conditions and helps keep details crisp.

One of the best things about the Oppo Find X5 Lite is its super fast-charging. The company partnered with Sonic the Hedgehog 2 for the release of this phone, and whilst it doesn’t quite charge at the speed of sound, its still pretty impressive, thanks to the 65W SuperVOOC charger included in the box.

This can juice the phone to 59% in 15 minutes and 95% in 30 minutes. It does get slightly warm, but I’ve found the same with other phones that have this technology.

Fast-charging aside, the battery life on this phone is still great. I could not get the PCMark app’s battery test to run, but on Geekbench 4 the Oppo Find X5 Lite managed a very respectable 12 hours and 6 minutes. 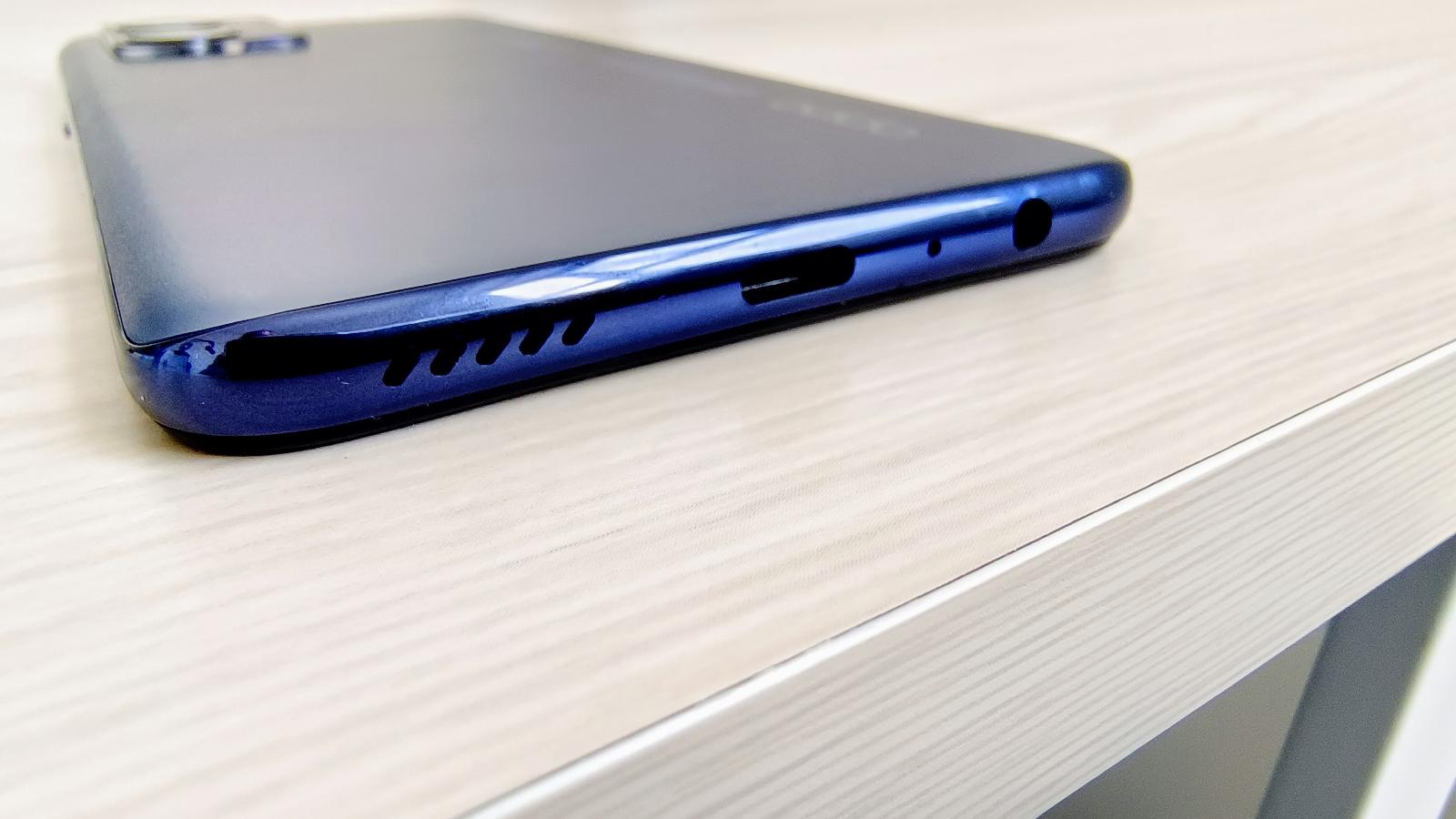 In real life, this 4500mAh cell (made up of two 2250mAh connected batteries) translates to up two days of juice, depending on your usage. Even streaming Twitch for hours whilst scrolling Twitter did not make a major dent in the battery.

The phone does not support wireless charging, but that is a small price to pay for the ultra-fast charging and sturdy battery life.

The Oppo Find X5 Lite runs on Oppo’s ColorOS flavour of Android 11. This is one of the biggest drawbacks of the Oppo Find X5 Lite, considering that Android 13 is now in beta, so the software is outdated compared to rivals. Oppo has confirmed the phone gets two years’ worth of Android updates though, so it will see Android 12 and 13 down the line.

The company has also promised four years of Android security updates, which is decent for the price of the phone.

The ColorOS experience is rather seamless and clean compared to other Android skins I have reviewed. Swiping upwards gives access to the app drawer, and you will find all the standard Google features such as Google Discover, Google Photos integration and more.

There is some app bloat like PUBG and Booking.com, but these can be uninstalled. Plus, its not quite as obtrusive as what I’ve seen from phones from the likes of Honor and Xioami. 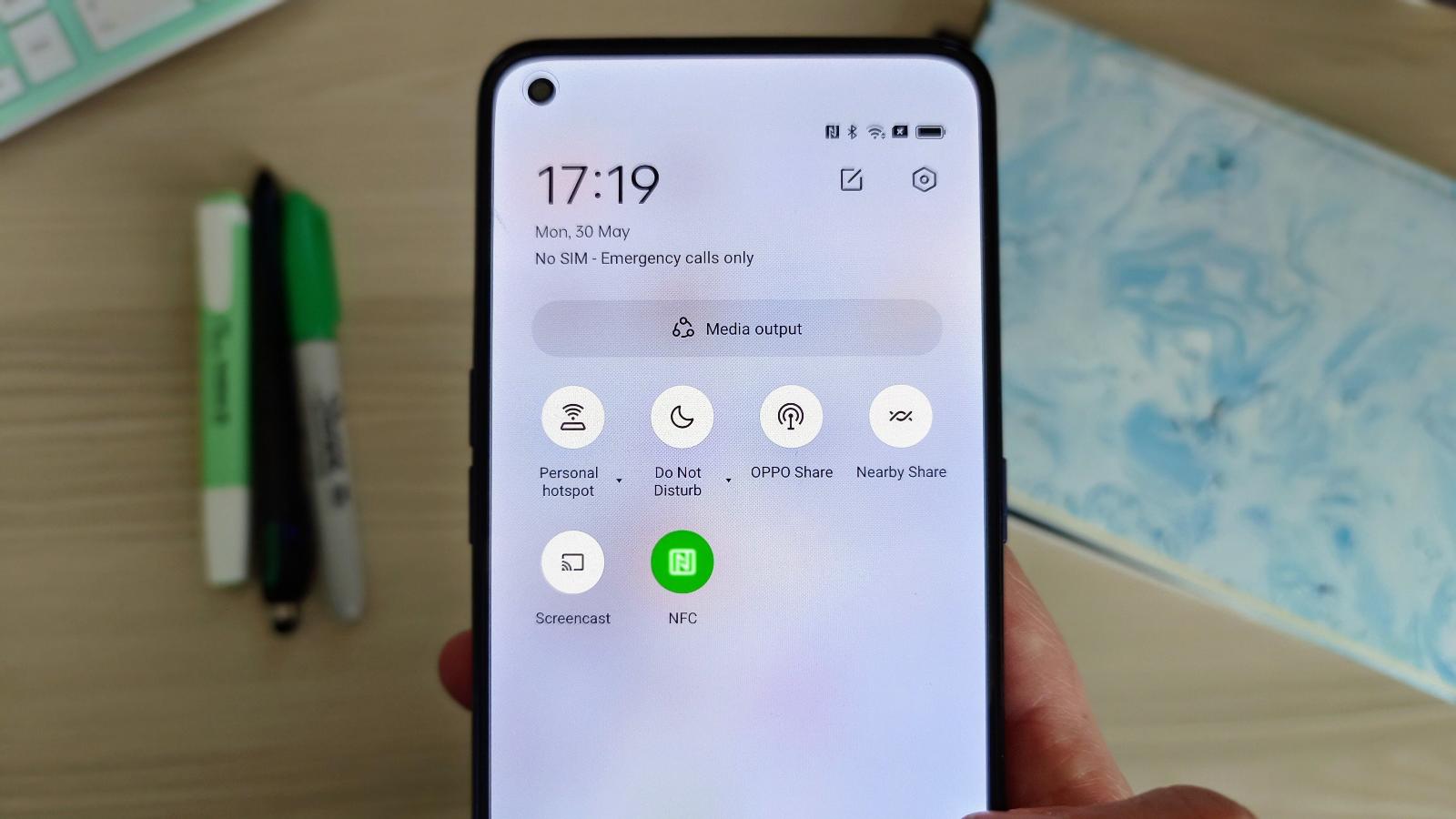 Oppo has multiple customisation options, so you can tweak and tidy your home screen to suit your preferences with widgets, or toggle on the always-on display. You can utilise split screen, flexible windows and smart sidebars to quickly switch between apps and programmes.

If you are a parent planning on buying an Oppo Find X5 Lite for your child, then there is a kids space mode where you can limit screen time, restrict apps, and prevent users from spending money and using data. There are similar features for your own digital wellbeing, should you be guilty of being glued to your smartphone (I know the feeling).

The Oppo Find X5 Lite costs £419, and you can currently buy it from Oppo, Amazon, Very and Argos. If you would prefer to pay monthly, then there are contracts available via Mobiles.co.uk, Carphone Warehouse, Vodafone and O2 – with prices starting from £22.99 per month.

Like other Oppo phones, the Find X5 Lite is not available from retailers or carriers in the US. 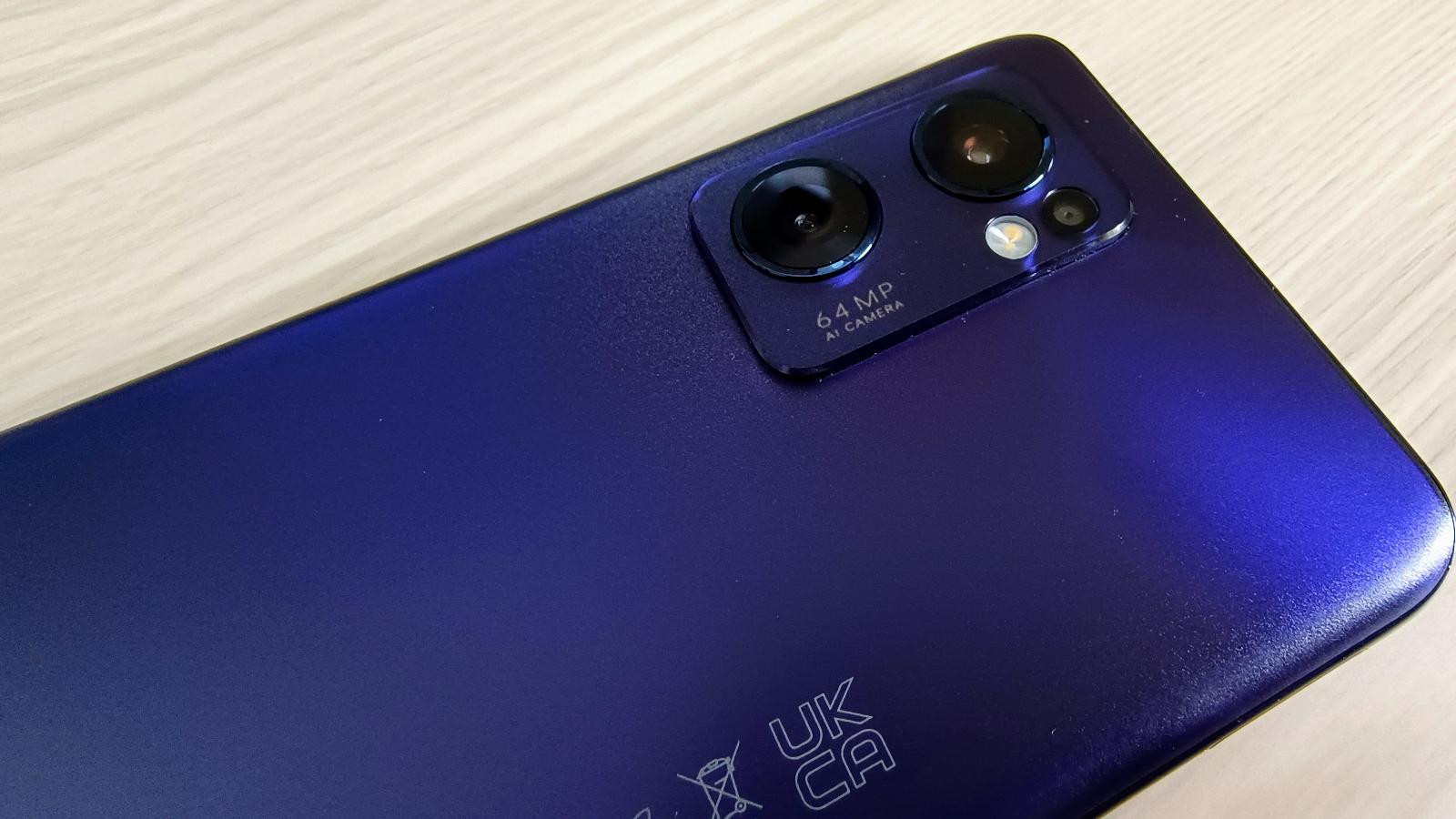 If battery life is a priority for you, then this is a phone that is durable, but also charges remarkably quick. However, for a little less cash it is also worth considering the brand-new OnePlus Nord 2T, which we have dubbed as the best mid-range phone of this year so far.

With great battery life, speedy charging and a bright display, the Oppo Find X5 has a lot of the key things that mid-range phone shoppers will be looking for. The ColorOs experience still remains one of the cleanest Android skins on the market – though it is a shame that it ships with Android 11. At least Android 12 and 13 are promised.

In addition, the cameras do not match the standard of rivals, and the performance under the hood is also outperformed by other phones – some of which cost less. If you can overcome these flaws, then the Oppo Find X5 is still a mid-range contender.