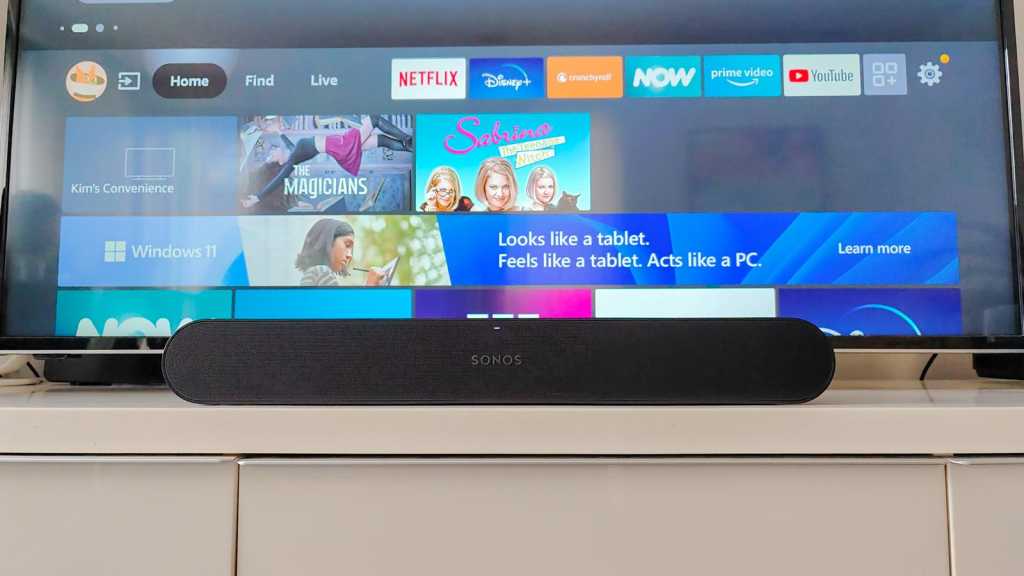 The Sonos Ray is an impressive affordable soundbar, with an attractive and compact design along with an audio profile that excels in clarity and scape. It’s only held back by the lack of HDMI Arc – and with it Dolby Atmos – and microphones for voice controls.

Good soundbars are rarely cheap, and neither are Sonos speakers. It doesn’t take a genius to figure out that Sonos soundbars tend to set you back a bit – at least until the Ray.

Sonos’s new Ray soundbar isn’t exactly cheap – it’s still $279/£279/€299 – but it’s significantly cheaper than the company’s other home theatre audio options. Sonos sees it as an entry-level option for people who’ve been making do with their TV’s built-in sound until now, or for anyone wanting to upgrade the audio on a second TV in the kitchen or bedroom.

Still, the price drop comes with compromises. This is Sonos’s smallest soundbar, and it won’t match the audio horsepower of the Beam or Arc. There’s no HDMI Arc input, so you’ll have to connect to your TV via optical, and more frustratingly there’s no microphone for voice controls.

So the question is: is the sound here good enough to overcome those limitations and succeed at a cheap-ish price, or should Sonos have stuck to its strengths at the premium end of the market?

The Ray fits neatly into Sonos’s design language. Available in either black or white, this is a simple bar in a matt finish with minimal controls and a subtle Sonos logo. 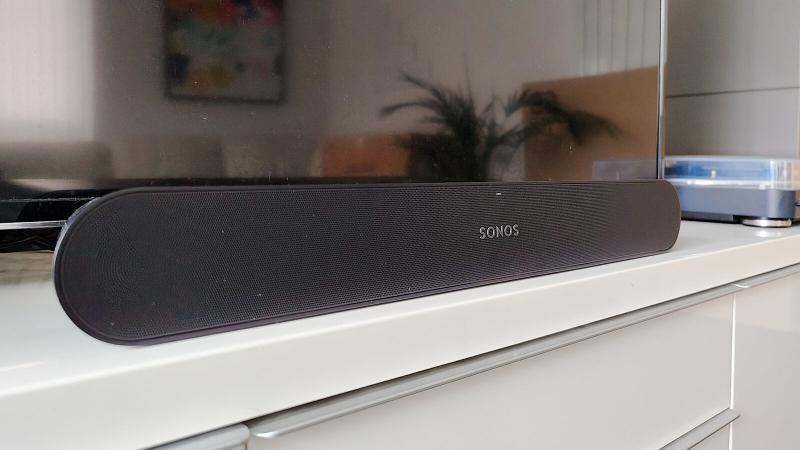 It’s not shaped quite like either of Sonos’s bigger soundbars. Instead it’s slightly flared, with the front of the speaker longer than the rear side – a result of the way the speakers are angled slightly to fire sound out to fill the room. The sound all fires out forwards though, meaning this is well-suited to keeping inside a media cabinet, or wall-mounting.

The Ray is a compact soundbar, at just 55.9cm long, though its height and depth are similar to Sonos’s larger offerings. At 7.1cm tall it does go right up to the bottom edge of my TV, so depending on how you’ll be positioning it you may want to measure how tall your TV stand is just to make sure it won’t be blocking off the bottom of your screen.

On-device controls are simple: three touch-sensitive buttons, one for play/pause and the other two mostly used for adjusting volume up or down. You can also swipe across them to skip a track or go back to the previous song unless you’re using radio. 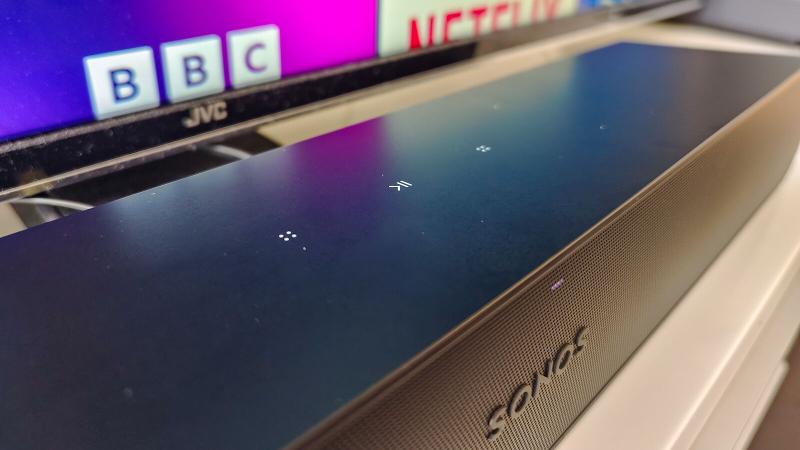 There’s also a single status LED along the front, though you can turn this off if you find it distracting.

With the smaller size, Sonos says it envisions the Ray working best with TVs that are 55in or smaller, but it’s short enough that it should sit comfortably inside the edges of almost any modern TV.

For better or worse, connectivity on the Ray is kept simple: beyond the power socket, all you get are optical, Ethernet, and Wi-Fi. 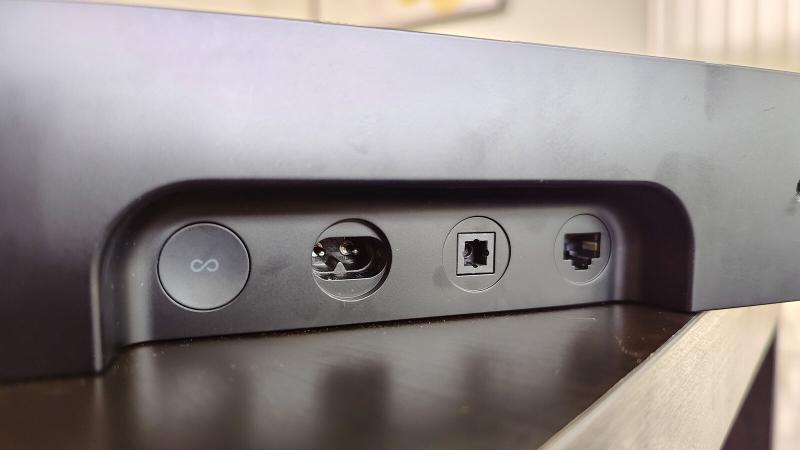 For connecting it up to your TV, you’ll essentially have to use optical. That shouldn’t be a problem, as the port is pretty standard and can be found on TVs both old and new – and even a lot of desktop PCs, with Sonos also pitching the Ray as an option for a compact gaming PC soundbar. Sonos helpfully includes a cable with the speaker too, so don’t worry if you don’t have one already.

What you won’t get is the option of using HDMI Arc/eArc, the more recent standard. This isn’t likely to be a dealbreaker, but it does mean that you won’t get HDMI-CEC benefits like being able to power on the TV by switching on the soundbar, and is also why the Ray is the only Sonos soundbar to not support Dolby Atmos – though it can handle Stereo PCM, Dolby Digital, and DTS Digital Surround.

Removing HDMI Arc can also make connecting the Ray to your TV remote a little trickier. Sonos doesn’t ship the Ray with its own remote, so you’ll want to connect it to your TV’s (or else rely on the app or the buttons on the speaker itself to control volume).

Most TV remotes will still work easily over optical, but some more recent ones that use Bluetooth or RF may be a bit trickier – it took me a good 10 minutes of diving through TV settings menus and scouring Sonos help pages to get the remote for the LG TV I’ve been reviewing to work nicely with the Ray, though it did get there eventually. 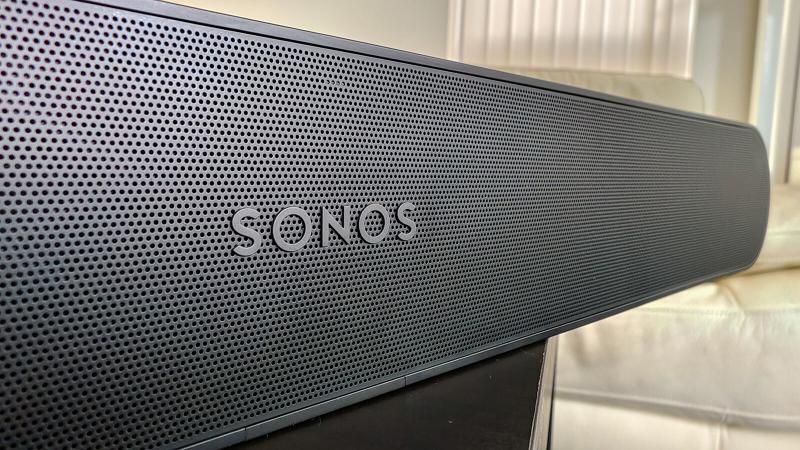 Like all Sonos speakers, the Ray also features both Ethernet and Wi-Fi, and this is how you’ll have to connect to the speaker if you want to also use it to play music on. Luckily it’ll play nicely with Apple AirPlay and Spotify Connect, so depending on how you listen to your music you should still be able to take advantage easily enough.

While Sonos may have begrudgingly added Bluetooth support into its portable Move and Roam speakers, there was no such addition here. There’s also no support for 3.5mm or other analogue audio inputs, so you won’t be able to physically connect a phone, laptop, or record player to play from.

In a quirk of Sonos’s marketing, the company announced its new Sonos Voice Controls – voiced by none other than Breaking Bad’s Giancarlo Esposito – at the same time it announced the Ray, one of its few speakers to not include microphones.

That means the Ray doesn’t support the new controls, and equally can’t run either Google Assistant or Amazon Alexa. 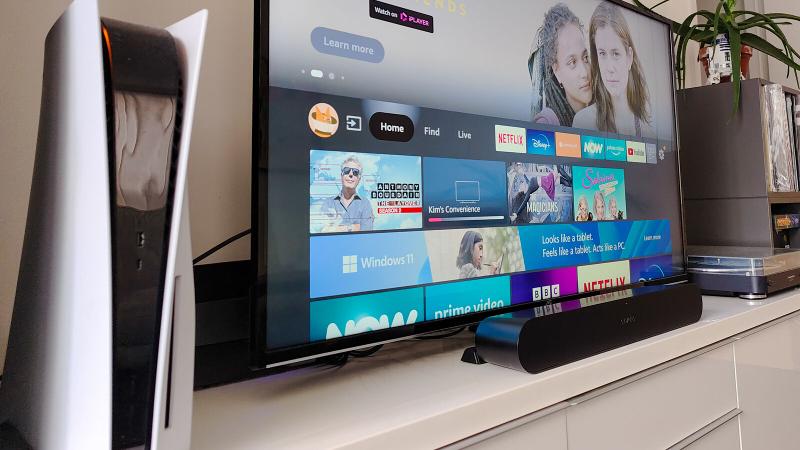 What smart support there is comes from the free Sonos app, which is a required part of the setup process anyway. This includes an EQ to tune the speaker’s sound profile, access to a few music streaming services and radio tools, and settings to group the Ray with other Sonos speakers.

The Ray also supports Trueplay, a one-time process that tunes the speaker for its position in the room. This requires an iPhone or iPad to carry out, so you’ll need to either be an Apple user yourself or know a friend who’ll let you borrow their iPhone to set it up.

So, after all that, how does the Ray actually sound?

It’s about what you might expect: Sonos’s excellent clarity and careful tuning shines through, but the physical constraints of the speaker’s size hold back the bass from being its best.

There are four main drivers here: two elliptical full-range woofers found in the speakers centre, and two tweeters at the ends with split waveguides that project audio both straight ahead and out at an angle to help deliver room-filling sound. Those four drivers are combined with a bass reflex system to complete the sonic profile. 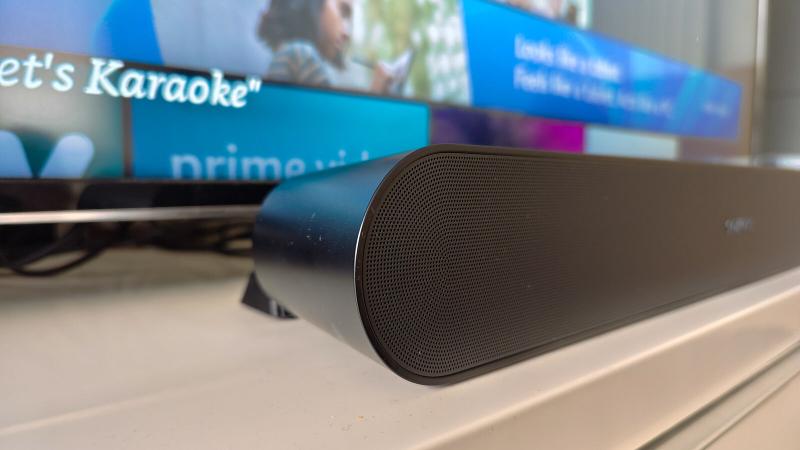 The mids and trebles are undeniably impressive, and help the Ray excel for listening to pop and rock music, or driving dialogue-heavy TV and film.

The bass is where the Ray can’t keep with larger, more expensive rivals, and it holds it back a little for hip hop music or action-heavy scenes. This becomes especially clear when you crank the volume up: the Ray can get impressively loud, but as the volume increases the bass gets left behind.

Where the Ray makes up for this is the clarity of its soundscape. The speaker does a great job of separating sounds, which pays off in more complex musical arrangements or in film scenes with audio from all over. On most cheaper speakers these would all run together into a murky mess, but the Ray keeps things crisp and clear. 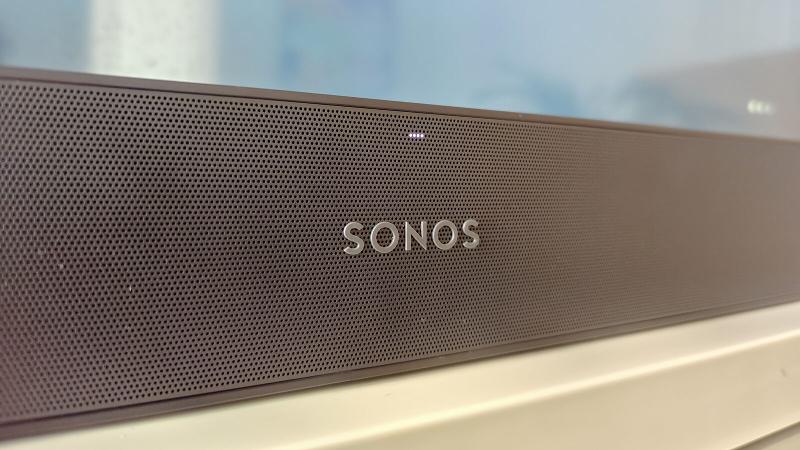 The Ray’s pricing makes it an attractive entry point into the Sonos ecosystem, though then the price rises sharply. You could pair it with a couple of Sonos One or One SL speakers for a surround setup for example, or connect the Sonos Sub for extra bass – though this alone costs more than double the Ray on its own.

Of course, you can also connect it to other Sonos speakers around the house for multi-room audio without spending quite so much.

At $279/£279/€299 the Sonos Ray isn’t a bargain bucket speaker – it stills costs more than double the Roku Streambar, for example – but it’s certainly at the cheaper end of the soundbar space.

You can grab it from Sonos itself, or from the likes of Argos or John Lewis in the UK, or Best Buy and B&H in the US. If you want to wall-mount it, the official Sonos kit is an extra $39/£39/€49.

It’s also significantly cheaper than the next Sonos option, the $449/£449/€499 Beam Gen 2, so should make a Sonos home theatre accessible to a lot more people than before. 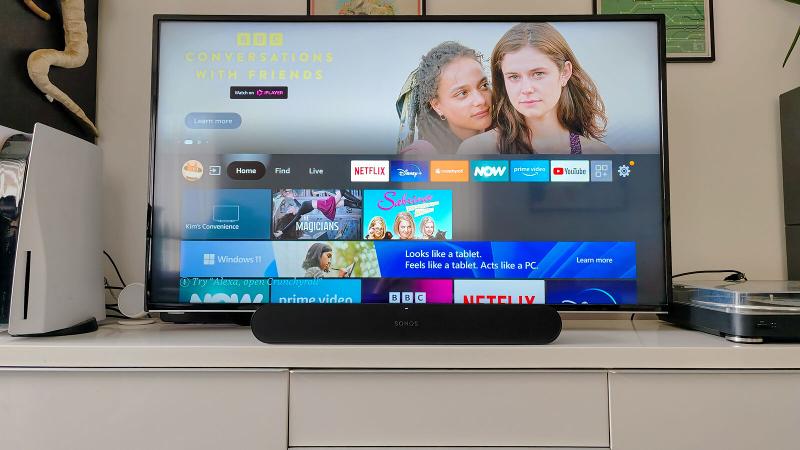 The sound quality here is likely better than most other options at the price, but it’s not a clear cut thing. The Creative Stage 360 and Panasonic SC-HTB490 both cost less and include a subwoofer, so will outclass the Ray on bass.

Both also include improved connectivity and niceties like Dolby Atmos support, while the Polk React drops the sub but bakes in voice controls with Alexa support.

Check out our ranking of the best soundbars for more alternatives, or the best Sonos speakers to decide if you really want to commit to the Sonos ecosystem.

The Ray is an impressive affordable soundbar, with an attractive and compact design along with an audio profile that excels in clarity and scape.

There are limitations though. The lack of HDMI Arc – and with it Dolby Atmos – bristles a little, as does the decision to omit microphones and voice controls. And it may be a Sonos staple, but the insistence on leaving out either Bluetooth or analogue audio connections could hold this back from being the heart of your home audio.

Still, if you want to start building a Sonos setup, or want a cheap(ish) TV speaker to join your other Sonos gear, then it’s great to see a more affordable option than the Beam and Arc.

Cutting prices requires compromise, and Sonos has chosen to pare off extra features to focus on sheer sound. I can’t think of anywhere else I’d rather its priorities lay.