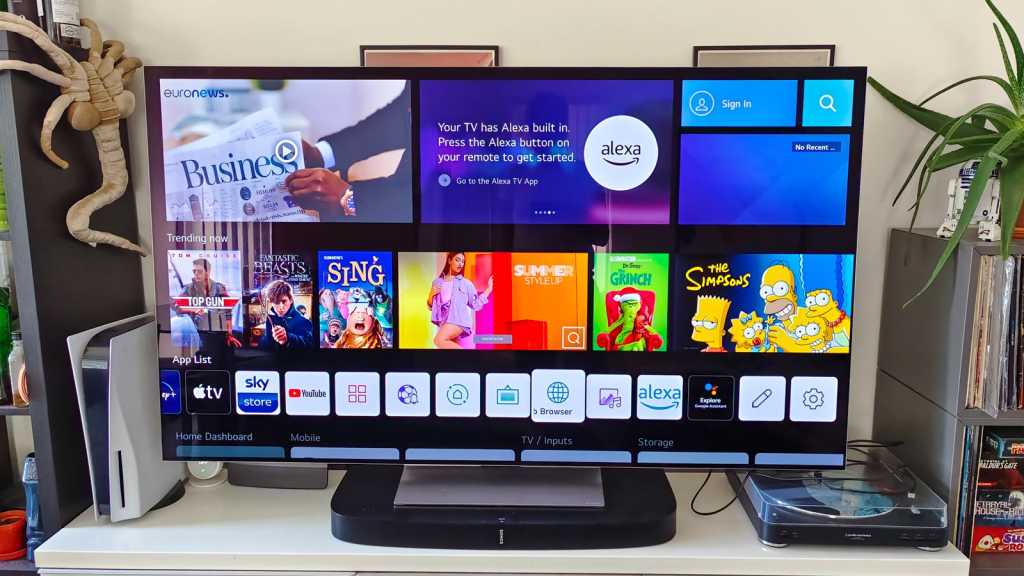 The LG G2 OLED offers excellent visual performance, boosted by brightness that rivals can’t match and excellent gaming features. It’s designed for wall-mounting though – there’s not even a stand in the box – and if that’s not your plan then the cheaper C2 series offers almost identical quality for less.

Designed for wall-mounting (stands are sold separately) this is an ultra-thin set, with a thin bezel around the display and a build designed to sit flush against the wall.

With large screen options, LG’s latest display tech and TV processor, and a full suite of HDMI 2.1 ports to drive 120fps gameplay from the latest games consoles, there’s a lot to like in the G2. But does it do enough to justify the extra cost compared to the excellent C2 OLED?

As LG’s ‘Gallery’ TVs, the G2 models – available in 55-, 65- (the model I’ve reviewed), 77-, and 83in – are designed to look their best when hanging on a wall. I’ve only been testing it for a few weeks though, so didn’t fancy drilling into my wall for the occasion.

With mounting in mind, LG has worked to make the models as thin as possible – less than two and a half centimetres thick. Combine that with the thin bezel around the screen itself – 0.6cm for the most part, though a bit thicker on the chin – and the picture will just barely hang off the wall itself.

The downside to this is that while the G2 ships with a wall mount, it doesn’t ship with a stand. So if you’d rather put this on a traditional TV stand, you’ll have to pay extra for one of LG’s various stand or mount options – or just opt for the slightly cheaper C2 models, which come with a stand included and offer few compromises on quality elsewhere.

The stand I was provided for testing doesn’t seem to be available in the UK at the time of writing but is $149 in the US. Last year, LG offered a Gallery Stand for various 2019-2021 models which may well fit this year’s too and costs £249.

The G2 packs a level of polish that helps justify its price tag. While you hopefully won’t see it much, the TV’s rear is finished in brushed metal, though pop-out plastic panels are used to cover the wall-mounting fixings and ports, which are spread out across the TV’s rear to keep the bulk evenly distributed.

The included Magic Remote is also slender, with a motion-controlled onscreen cursor – or the option to navigate with more traditional buttons. Built-in shortcuts go to Netflix, Prime Video, Disney+, and Rakuten TV, along with quick activation of either Google Assistant or Amazon Alexa.

Connectivity here is pretty hard to fault. All four HDMI ports use the latest 2.1 standard and so can support 4K 120fps content from the latest games consoles, and the TV is capable of automatically recognising and naming each input based on what’s connected, even differentiating specific games consoles. One of the HDMI sockets also includes support for eArcC/Arc-enabled soundbars.

You also get three USB-A ports, an Ethernet socket, an optical out for audio, and of course both Bluetooth and Wi-Fi, along with support for both terrestrial and satellite TV input.

On the software side, LG’s new webOS 22 comes fully equipped with a range of major streaming apps pre-installed, and many more are downloadable from the app store.

New features for this year’s version include multiple profiles for different family members, parental controls to limit screen time and the like, and an ‘Always Ready’ mode which basically offers glorified screensavers if you want to leave the TV on at all times showing some artwork or the time – similar to Samsung’s The Frame.

It’s quick and simple to navigate, with no stutter or lag when diving between menus or apps, no doubt helped by the new α 9 Gen 5 processor – though on one occasion Netflix did crash, and the TV simply refused to re-open the app until it had been cleared from RAM.

Like most TV interfaces, there’s a little too much emphasis on advertising content to you on the default homepage, though you can re-arrange things slightly to improve matters. It’s also notable that while the interface pulls out recommendations and new content from across the major streamers, Netflix is not included in that.

As hinted at by the remote, both Google Assistant and Amazon Alexa are supported here, and you can also use the TV itself as a hub to control other smart home tech. Thanks to a microphone in the remote, voice search is also available, pulling content from various sources including your apps.

The remote also includes an NFC chip, and so with a tap you can link your phone to your TV. That lets you use your phone itself as a remote, cast your phone screen to your TV, or even cast TV audio back to your phone – the easiest thing if you don’t want to go through the hassle of pairing Bluetooth headphones to the TV itself.

In terms of pure display quality, the G2 OLEDs aren’t all that different from last year’s G1 models – or indeed this year’s cheaper C2 series.

That’s not to sound dismissive of the quality here – the G2 looks incredible, helped by the return of LG’s Evo panel tech and that new 5th-gen α 9 processor I mentioned earlier.

The chip is combined with a new heatsink to drive the TV’s Brightness Booster Max tech – the heatsink allows it to run brighter without overheating. It doesn’t compromise contrast, preserving inky blacks while amping up colour and vividity elsewhere.

This is essentially the only display spec where the G2 pulls away from its cheaper C2 sibling, but it does mean the G2 offers superior HDR, especially if you tend to watch in a bright room – speaking of which, there’s support for the Dolby Vision, HDR10, and HLG HDR standards, but not HDR10+.

The enhanced brightness is just one part of the machine learning tech at work here, and various ‘AI’-branded settings will adjust your picture in real-time to optimise it, based on factors ranging from the ambient light to the genre of whatever’s on screen.

If you want it to, the G2 can also automatically switch between the various display modes depending on input – switching to the Game Optimiser when you connect a game console, for example.

The modes are a mixed bag. The Standard and Eco modes are essentially indistinguishable and serve as a capable default. Cinephiles may prefer the Cinema and Filmmaker modes, which disable motion smoothing and some image enhancements to best produce the image intended by filmmakers – though note that means they’ve been designed to look best in a dark room.

I’d only really warn you off the Vivid mode – which, for some reason, is the first in the set and thus may seem the obvious default. With aggressive motion smoothing, noise reduction, and amped up brightness, this looks absolutely awful, adding an artificial sheen to whatever you watch.

The Game Optimiser is the most fully featured and customisable of the various viewing modes, with its own dedicated user interface to tweak latency, frame rates, and various brightness and colour settings. Thanks to low latency – down to around 13ms – plus 120Hz, VRR (variable refresh rate), and Nvidia G-Sync support, the G2 is an impressive option for console gamers, who won’t find much that’s missing here.

As for sound – it’s fine. TV speakers rarely impress too much, and anyone spending this much on a set should probably look at pairing it with a soundbar or surround set-up, ideally one with Dolby Atmos support. If you don’t the built-in speakers are decent but a bit thin-sounding, though the AI Sound Pro setting helps a little, while the Clear Voice setting does a good job of emphasising dialogue in the mix.

The G2 OLED series is available now, and you can buy direct from LG or Amazon, or from retailers like Currys or Box in the UK, and Best Buy or Walmart in the US.

For comparison’s sake, the 55in version of the C2 would set you back $1,999/£1,899 (and that’s including a stand), so there’s a decent price gap – even more so if you’re open to buying one of the smaller 48in or 42in C2 models, although they don’t feature higher brightness.

There’s little enough difference between the two that unless you’re planning to wall-mount, you’ll probably be just as happy with a cheaper C2 model. Check out the rest of our best TV ranking for the other options out there.

The LG G2 OLED is a fantastic TV by any measure. Aside from the dismal Vivid mode you’ll find excellent visual performance whatever you throw at it, boosted by brightness that rivals can’t match.

The biggest headache for many will be the fact that there’s no stand included in the box, adding an extra cost for anyone who isn’t looking to wall-mount it. Between that and the fact that display performance is almost identical, the C2 models will be a better bet for most people. They’re a bit thicker than the G2 versions, but if your TV’s on a stand that really won’t matter.

Wall-mounters shouldn’t be tempted away though – excellent picture quality, a slim design, and oodles of smart features make this one of the best TVs around if you like it up against the wall.