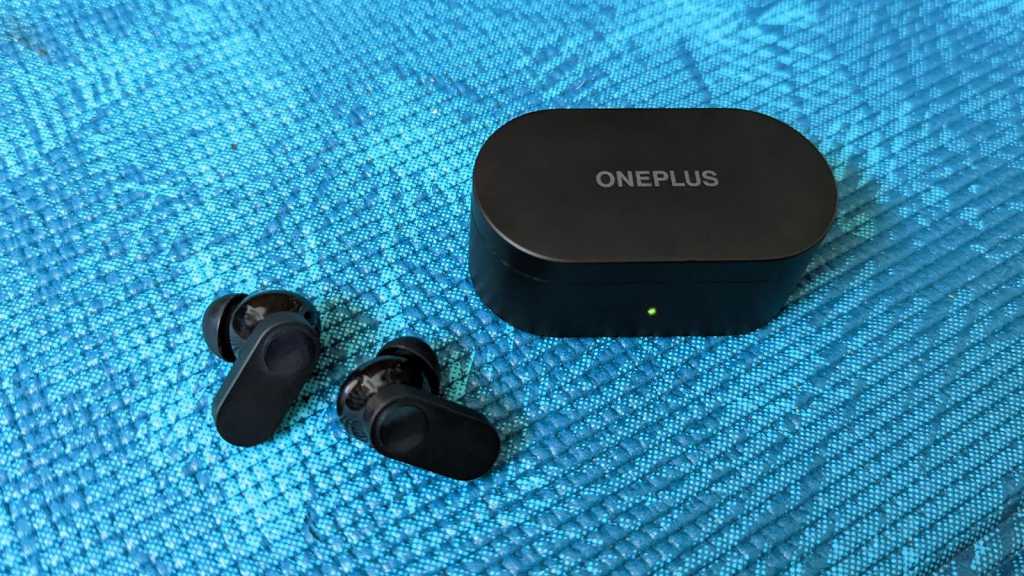 The first true wireless headphones to sport the Nord name, OnePlus’ newest buds boast a low price, good sound and great battery life that, even with a lack of ANC, make these a great value buy

OnePlus has offered up its own Bluetooth earphones since 2018 and moved into true wireless headphones in 2020, with the original OnePlus Buds. While value has always been part of the equation when it comes to OnePlus’ audio products, the company is now plumbing new depths, by leveraging its affordable Nord brand.

Make no mistake though, despite the OnePlus Nord Buds being the company’s lowest-priced TWS earphones to date, they look to offer the same impressive bang for your buck as the company’s Nord smartphone series.

Sporting a markedly different design to any of OnePlus’ previous TWS headphones, the Nord Buds stand out with a distinct pill-shaped charging case, rendered in a pleasing matt ‘Black Slate’ (or ‘Marble White’ in some markets) finish. On the outside, beyond the company logo, you’ll find an LED power indicator, while on the back sits a USB-C port for charging and a well-concealed setup button too.

The precise lines, flat sides and tight tolerances of the case give it a premium feel, reinforced by the nicely-sprung hinge and sturdy case lid, which flips up to reveal the buds themselves; positioned neatly next to one another at a 45° angle and held in place with magnets that only give up the ghost (read: buds) when up against vigorous shaking or a particularly egregious drop on the ground.

Like the case, the design of the Nord Buds buds doesn’t resemble any of OnePlus’ existing TWS earphones and despite still sporting a stemmed design, they’re on the shorter, stubbier side – echoing the pill-shaped motif of the case – with a nice contrast made possible by the polished concave touch-sensitive areas on the outer face of each one.

Even though the Nord Buds’ case is a pleasure to handle, its overall dimensions mean it’s not particularly pocket friendly; with a near-square cross-section that sits bulkily in the pocket, no matter which way around it’s placed. That clean plastic bodywork is prone to picking up micro-abrasions too, with early signs of wear appearing after only a couple of weeks of use.

The buds come pre-fitted with some oval-shaped silicone ear tips – with the largest being attached from the outset – while medium and small tips are also included in-box. While I usually have to size down, the Nord Buds’ pre-fitted tips fit snuggly and comfortable in my ears, and proved perfectly suitable to wear for hours at a time without irritation.

Only when working out did I consider opting from one of the smaller sizes, as actions like running and jumping had the Buds slowly work their way out of my ear canal. Their IP55-certified design does, at least, mean there’s no risk of damage from being exposed to sweat or rain.

Initial setup and pairing were painless, with OnePlus users benefitting from the company’s in-house Fast Pair feature (which just requires that you hold the Buds near your device with the case lid open to get started), while other Android phones should offer a similarly seamless experience, once you’ve downloaded the HeyMelody app from the Play Store.

The same app is also available on iOS, although the Nord Buds aren’t yet supported at the time of review, suggesting forthcoming support, hopefully, soon.

It would have been nice to have relied on Google’s Fast Pair feature rather than OnePlus’ own version, so that this speedy setup method wasn’t limited to the OnePlus 6 (running Android 11) and newer. The company likely did this to keep a handful of features exclusive to its own devices, in order to make your OnePlus Nord Buds + OnePlus phone experience that little bit better than any other pairing.

Once connected, you can view the battery status of the case and each bud independently on your phone, as well as access the ‘Sound Master EQ’ menu; which features a handful of predefined EQ curves (titled Balanced, Bold, Serenade and Bass), as well as the option to create your own.

Interaction with the Nord Buds themselves takes place via the aforementioned capacitive buttons on each’s outer face. While they’re responsive enough, they are quite small and may take practice to correctly hit each and every time.

Out the box, the button on each is configured to behave the same way, with a single tap for play/pause, a double-tap for next track and a triple-tap for previous; all of which can be changed customised on your connected phone for each bud independently.

What doesn’t make quite as much sense is the seemingly arbitrary way in which certain functions are locked to certain gestures. A long-press does nothing by default but can only be set to switch between the last two devices you connected to (an admittedly handy feature in itself), while device assistant support can only be accessed via a double or triple-tap. Why can’t I set long-press to access my assistant, OnePlus? Would it have been that much harder to allow for any action to be paired with any gesture?

Beyond the slightly finicky touch input experience, the absence of features like in-ear detection reminds you that these are, in fact, budget buds (which can be easy to forget, based on the overall experience offered). There’s also no means of on-ear volume control, meaning you’ll still have to pull out your phone for that luxury.

In testing the Nord Buds were consistently quick to connect when popping them out of the case and into my ears, only slipping up a couple of times after several hours of listening; with a brief audio delay between the left and right channels that was easily rectified by setting them back in their case and putting them back in again.

Quick pairing and adaptive touch controls mean nothing if the Nord Buds sound like hot garbage, but audio quality proved pleasantly surprising; serving up a characteristically U-shaped curve that emphasises bass and treble in the way that affordable headphones are so often tuned for.

Testing with the default ‘Balanced’ EQ profile the majority of the time, the Nord Buds offer a surprising amount of power, facilitated by sizeable 12.4mm drivers (that’s even larger than those used in the OnePlus Buds Pro). Those drivers are also titanium-coated, which is a nice nod to higher-end audio products, which rely on the material for its great strength to weight ratio and therefore, durability.

While there’s a definite bias to the sound profile and mids suffer without some manual correction via the EQ sliders, the Nord Buds deliver a clean and considered sound profile that doesn’t lean too heavily in one direction (or at least one that it can’t be pulled back from). Are you going to replace your old Sony 1000XM2s with these? Of course not, but you’re also not going to think of as any old low-cost buds, based on the way they sound.

One thing that the XM2s and a whole host of wireless headphones closer to the Nord Buds’ price point feature that is missing here is ANC (active noise cancellation). It’s not a hugely surprising absence in the budget space and even though you don’t have to spend that much more to get it, the implementation is usually lacklustre anyway without moving into the mid-range market and beyond.

The natural seal created by the silicon ear tips still does an acceptable job against ambient background noise and OnePlus claims that a there’s also an AI-powered noise reduction algorithm at work, when making calls, however, this proves hard to test as there’s no toggle to turn the feature on or off and call quality just seemed okay.

The same was true of microphone quality, with the Nord Buds’ four mics doing their job as intended (i.e. people on the other end of the line heard me without issue against road noise and other examples of everyday din) but didn’t go above and beyond expectations.

Another OnePlus-exclusive feature is Dolby Atmos support, which is a nice inclusion that ups audio quality where available, even if that availability is partially limited by OnePlus itself.

Despite the Nord Buds launching alongside the Nord CE 2 Lite and the Nord 2T, neither phone supports the feature; with only the company’s flagships (the OnePlus 7 or newer, including T, R and RT series phones) offering compatibility, at present.

OnePlus promises seven hours of wear from the Buds on a charge, which extends to a total of 30 hours when you factor in the case; figures we’re used to seeing on pricier TWS headphones that suggests a real confidence from the company in its latest creation.

Thankfully real-world usage is very strong (no doubt helped by the absence of ANC and the power demands that accompany the feature) with the whole setup (buds + case) taking me through a full five-day week, with several hours of podcasts, Twitch streams and YouTube videos under my belt each day, which should prove more than enough for most and plenty for long car rides and flights.

If you are still concerned about longevity, however, being affordable, the case doesn’t include wireless charging but plugging into the USB-C does facilitate a fast charge of around five hours wear from just ten minutes top-up. 60 minutes charge fully replenishes the Buds, while 100 minutes should bring the whole package (case included) back up to full health.

As with the company’s recent switch to Oppo’s VOOC charging on its phones, the Nord Buds come with a short red USB-A to USB-C cable. This does mean you won’t be able to charge the case back up on the go, from your phone, without an adapter or a dedicated USB-C to C cable, which is something to keep in mind.

The OnePlus Nord Buds originally launched in India on 28 April, before being introduced globally on 19 May, with retail availability varying fairly prominently by market.

Sales in Europe began on 24 May, while US pre-orders were scheduled from 31 May, with a ship date of 9 June.

As well as getting two colourways, India gets the Nord Buds at the best value – priced at ₹2,999, followed by the United States, where they’re selling for just $39, while Europe and the UK still nab a bargain at only €/£49, respectively.

You can pick the OnePlus Nord Buds up directly from OnePlus’ website ( India, US,  UK,  France,  Spain,  Germany), where it’s thought they could potentially replace the company’s previous best-value TWS buds, the OnePlus Buds Z2.

If you don’t like the Nord Buds’ design or their lack of wireless charging and ANC is a total dealbreaker, there are similarly-specced affordable options like Skullcandy’s recent Indy ANC buds, Xiaomi’s Buds 3T Pro or Redmi Buds 3 Pro and Nothing’s debut Ear (1) to consider, but all will ask more of your wallet in return.

For the money, it really is hard to fault the OnePlus Nord Buds. There’s definitely room for improvement but almost all of it comes from absent features, all of which would drive up the price.

The company might want to work on the software experience a little to expand user control and the nice finish on the bulky case isn’t the most durable but for what they do deliver for the money, the Nord Buds put forward a strong case in the budget TWS market and would also serve as an excellent pair of backup buds too.

If you want to see what other worthwhile affordable options there are, check out our best cheap headphones chart or see how the Nord Buds stack up against the best headphones on the market.