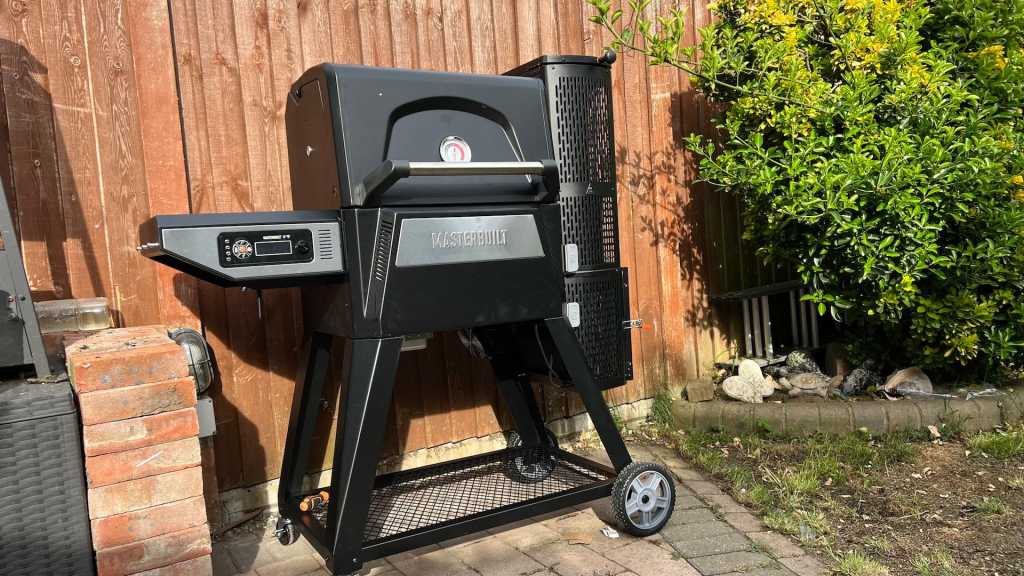 The Masterbuilt Gravity Series 560 is an impressive BBQ more akin to an outdoor oven than a traditional BBQ. It features a fan-controlled temperature system for stable temps, a gravity-fed hopper for up to 15 hours of use and smartphone connectivity to keep an eye on your meat during longer cooks. It’s expensive, but for some, it’ll be the perfect garden accessory.

As the hot, long summer days approach, you might be tempted to dust off your ageing BBQ and grill yourself a few burgers – I know I have.

But, rather than sticking with the same basic BBQ I’ve used for the past few years, I’ve had my eyes opened to the world of smart BBQs – and the Masterbuilt Gravity Series 560 in particular. Offering the ability to control temperatures via a fan system, a gravity-fed hopper for easy fuelling and a companion app for your smartphone, it’s certainly more capable than your run-of-the-mill drum BBQ.

The problem is it has a premium price tag to match. Is it worth forking out on a premium BBQ when you can get a disposable one from the supermarket for less than £10/$10? Well…

The Masterbuilt Gravity Series 560 is an impressive bit of kit with a premium design that’ll stand out in your outdoor space, with a combination of black metal and stainless steel that simply looks stunning. 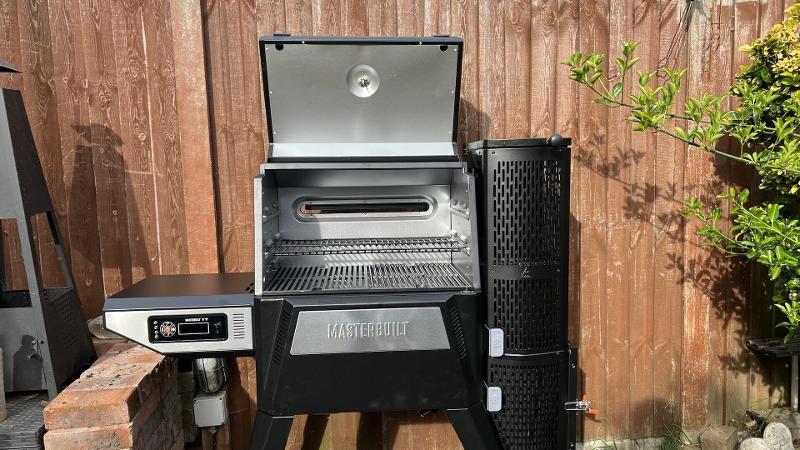 It sports a handy side table for sauces and utensils, with a digital control panel embedded within, and there’s space beneath to store coal and cleaning accessories too.

The large black grill lid is surprisingly lightweight, exposing the large grill within that Masterbuilt claims is big enough to fit either 4 racks of ribs, 8 chickens, 21 burgers or a whopping 37 sausages. After a fair few BBQs in the past couple of months, that’s a statement I agree with.

The two main cast-iron grates are reversible, with a thicker side suited to grilling and a thinner, tapered side designed for smoking – a nice touch, if you ask me. That’s flanked by two porcelain-coated warming racks for additional cooking space, which can be moved around the grill depending on what you need. 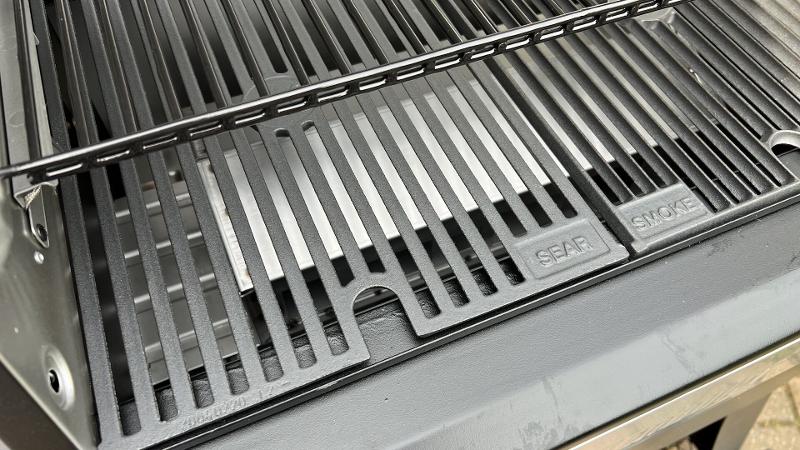 The real star of the show is the gravity-fed hopper attached to the right of the grill. Accessible via a lid, the hopper is where you store all your fuel, be it lump charcoal, briquettes or wood for smoking.

The hopper can hold between 4.5 and 7kg of fuel at any one time, which should be long enough for around 12-15 hours use. For reference, after a seven-hour cook, I still had around half the fuel left in the hopper.

What’s great about the hopper is that you can simply fill it and not have to worry about adding more fuel to the BBQ – one of the big problems with conventional BBQ setups. As the name implies, it lets gravity do the work, with more fuel falling onto the fire as needed. 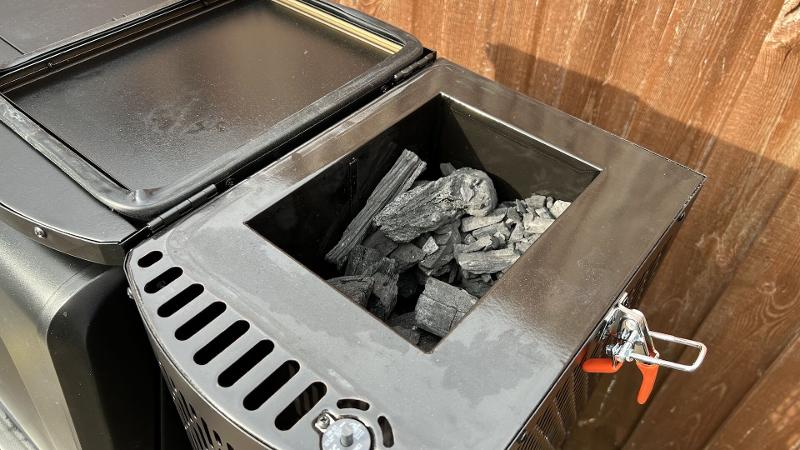 It also means that, unlike its simpler counterparts, you don’t need to empty the hopper after every cook and discard half-burnt coal. Instead, you can simply fire up where you left off the next time and not waste any fuel.

Beneath the hopper you’ll find a grate, where you slot your firelighter, and an ashbin to collect the ash and other debris from the hopper as it burns up. You’ve also got the option of putting wood chunks in the ashbin for a less powerful smokey flavour, but these have to be fairly small to avoid large fires.

Another difference between the Masterbuilt Gravity Series 560 and entry-level BBQs is that the hot charcoal doesn’t sit directly beneath the grill. Instead, the fire is within the hopper itself, with a smart fan system (that I’ll explain in detail below) directing the heat into the grill. The end result is a far more even cooking experience, with very few hot and cold spots. 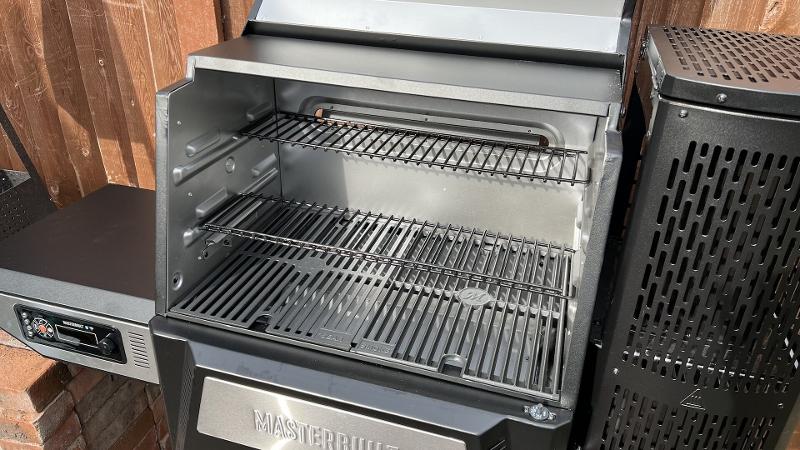 Once you’re done cooking, it’s just as easy to put out as it is to start; using provided sliders, simply block the airway between the tightly-sealed hopper and the grill to smother the flame and cool itself down within 30 minutes, ready for clean-up.

If you’re looking for a grill that’ll impress friends, family and neighbours at your next BBQ, the Masterbuilt Gravity Series 560 is the way to go.

The standout feature of the Masterbuilt 560, aside from its intuitive design, is its ability to control the temperature of the BBQ using a digital fan system found on its underside.

Officially, the Masterbuilt 560 can produce temps ranging from 110 to 370°C (or 225 to 700°F for those in the US), quickly heating up to a set temperature by blowing air into the hopper to produce more heat and smoke, then coming to a stop once the desired temperature has been reached. 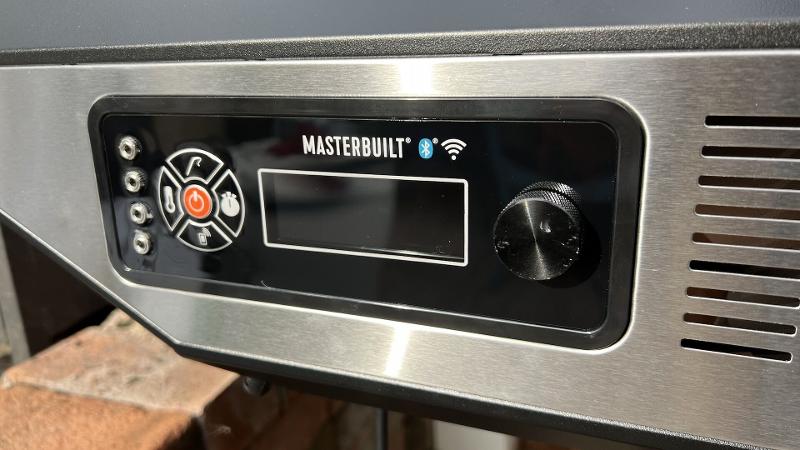 In fact, the Masterbuilt 560 can go from stone cold to a smoking temperature of 110°C in around 8 minutes, making the process of starting a BBQ much easier.

Once the fire’s lit and roaring within the gravity-fed hopper, it’s easy to increase temperature; simply use the control panel mounted on the left of the BBQ to select your desired temperature and wait.

Going from the smoke-ready 110°C to BBQ-ready 200°C took little more than a couple of minutes in my experience, making for a versatile cooking experience close to that of a conventional oven – but with all the fun of a BBQ.

It’ll sustain the selected temperature until the available fuel has been used too, making it particularly well suited for slow cooks, allowing you to keep the temperature at a stable level for the entire cook.

The control panel also provides the current temperature within the BBQ, along with timers (both count-up and count-down) and the controls that power the system. 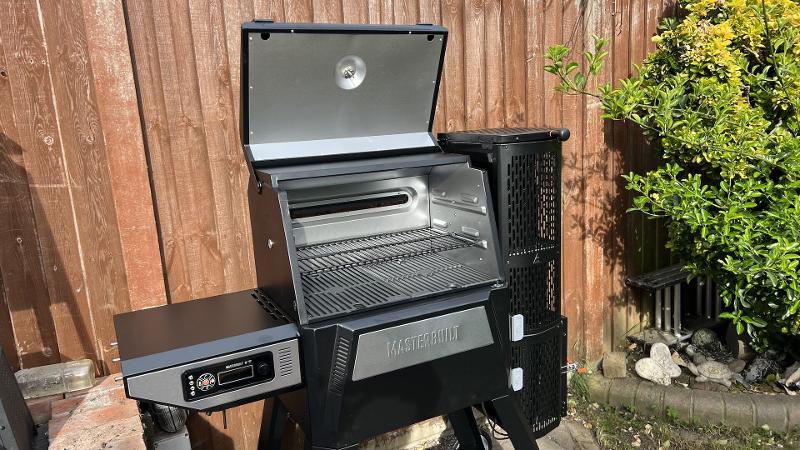 For thicker cuts of meat, you’ve got the option of connecting a probe – there’s one included in the box – and displaying internal food temps on the built-in display. You can have up to four for more complex cooks, but you’ll have to buy those separately.

It’s best for thick cuts of meat where the probe is fully submerged for long periods, as it’s slow to get an accurate temp reading. You’d be better off with a handheld temperature probe for quicker (and more accurate) internal temp reads while cooking, but it’s handy to have nonetheless.

As well as controls on the BBQ itself, there’s the Masterbuilt app for iOS and Android. From the app, you’ll be able to connect your BBQ to your home Wi-Fi network and keep an eye on your BBQs temps (both the internal temperature and the probe, if you’ve got one connected) and the remaining time if you’ve set a timer – a valuable resource for longer smoke sessions. 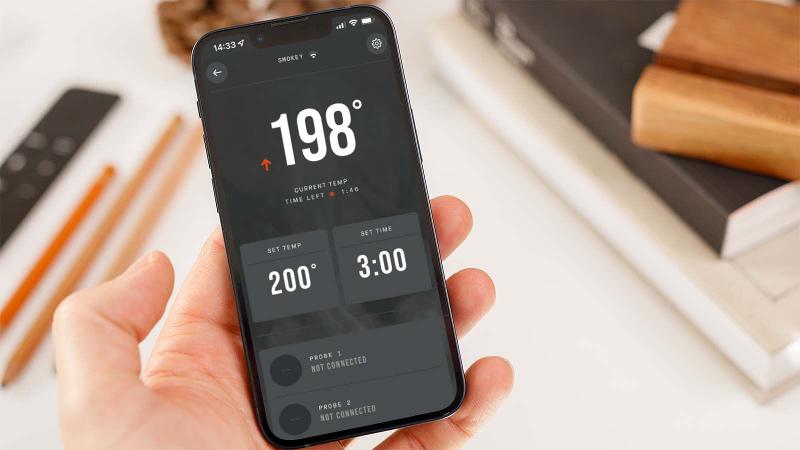 You’ll also get notifications when your BBQ is up to temperature, when the timer is about to end and you’ll also get a reminder post-cook to put your slides back in and clean up. What’s most handy is that, while errors will display as ER001 on the BBQ itself, the app will tell you what the problem is without having to dig out the manual.

The only real issue with the app is its hit-and-miss connectivity. It’s fine most of the time, connecting to the BBQ when opening the app, but there have been several occasions where I’ve had to go outside to the BBQ to re-activate its signal, defeating the purpose of the app.

It’s not a huge issue if you’re throwing some burgers on the grill for 10 minutes, but it became a little annoying when trying to keep an eye on temps during a recent 7-hour pork rib smoke session.

Overall though, the smarts on offer from the Masterbuilt 560 are impressive, providing all the tools that a BBQ-er (even relatively inexperienced ones like myself) needs to smoke, BBQ and grill to perfection. 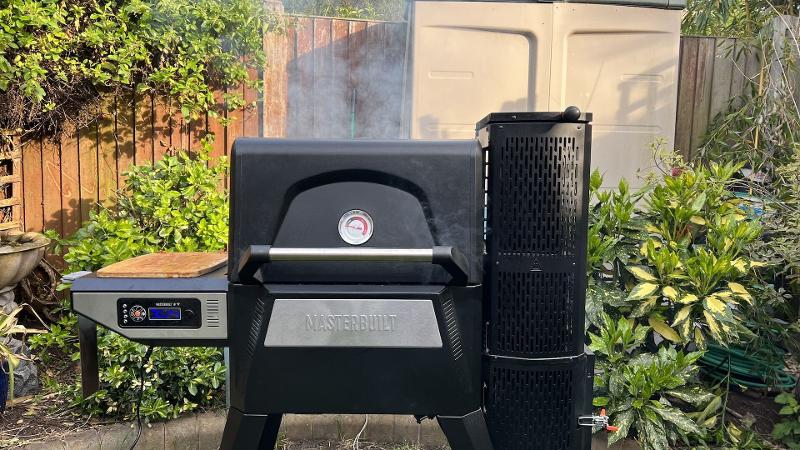 The only catch is that the smarts mean the BBQ needs power to work, so it might be worth investing in an outdoor-ready plug if you haven’t got one handy!

So, what’s it like to use? In a word; exciting.

I’ve never been much of a BBQ man, but over the past couple of months with the Masterbuilt 560, I’ve transformed into a self-proclaimed BBQ king. Move over burgers and sausages because I’m now able to smoke a rack of pork ribs, slow cook a beef brisket and cook a chicken on the rotisserie with very little effort – and it’s all down to the Masterbuilt 560.

I’ve slow-cooked pork ribs for 7 hours, and using the provided temperature probe, I was able to pull it at the exact internal temperature I wanted. The meat literally fell off the bone as it was pulled, and I could really taste the smokey flavour. 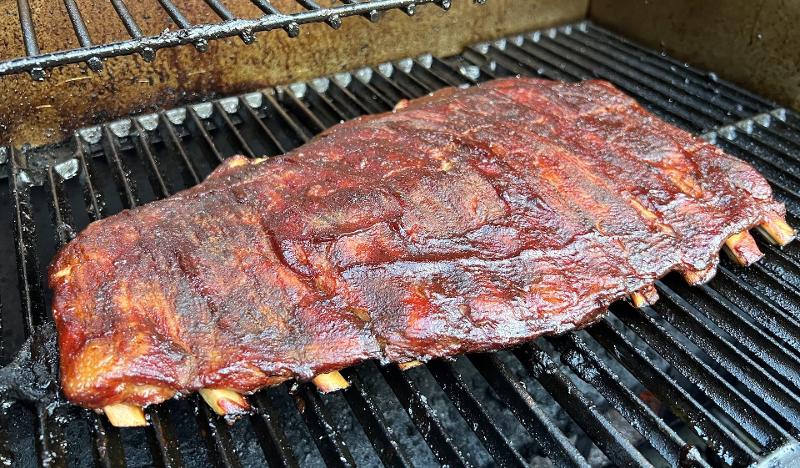 For someone as inexperienced as I, it was a particularly exciting moment, but one that has become increasingly frequent in the months I’ve been using the Masterbuilt 560 because the tech makes it a much easier task. It’s still time-consuming on longer cooks, but without the stress of having to maintain the temps and constantly feed new fuel yourself.

It’s undoubtedly a premium tech-infused BBQing experience that won’t be to everybody’s tastes, but if you’ve got the money and space, it’ll truly transform your view on outdoor cooking.

As I’ve hinted, the Masterbuilt Gravity Series 560 is a premium bit of kit, coming in at a cool £749/$499, making it much more expensive than standard grills available in most stores.

However, considering its repertoire of features and functionality, it’s essentially an outdoor oven, which makes the price a little more palatable. It’s also available at less than RRP from third-party retailers, which makes it a more tempting buy.

If you are tempted, you can pick up the Masterbuilt Gravity Series 560 from Masterbuilt alongside retailers like Amazon in the UK and Amazon and Walmart in the US. 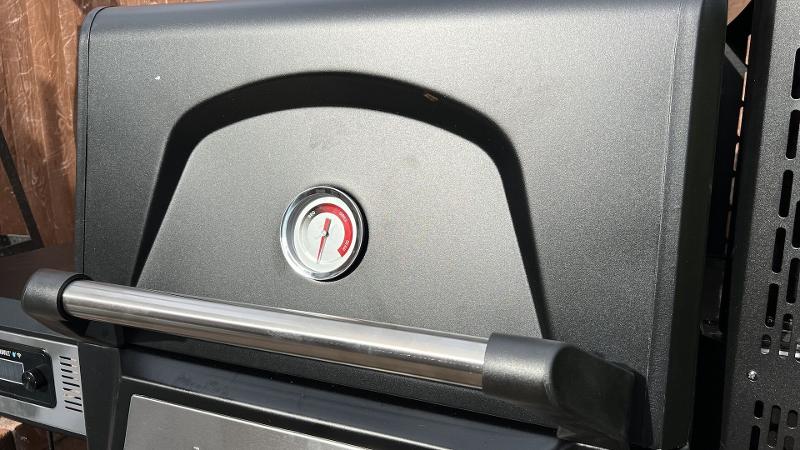 The Masterbuilt Gravity Series 560 offers the ultimate outdoor cooking experience, boasting the ability to not only BBQ your favourite meat but smoke it, grill it or even bake it thanks to near degree-perfect fan-controlled temperatures.

The wide range of temperatures, and the speed at which it reaches them, is impressive, matching conventional home ovens in terms of convenience – but with all the fun of an outdoor grill.

Throw in other handy features, like app connectivity, a smart probe, a gravity-fed hopper with enough space for 12-15 hours of fuel and plenty of space to cook your food and you’ve got a tempting option ideal for summer parties in the garden.

There’s no disputing that the Masterbuilt Gravity Series 560 is a premium BBQ, but it’s worth every penny if you can afford it.