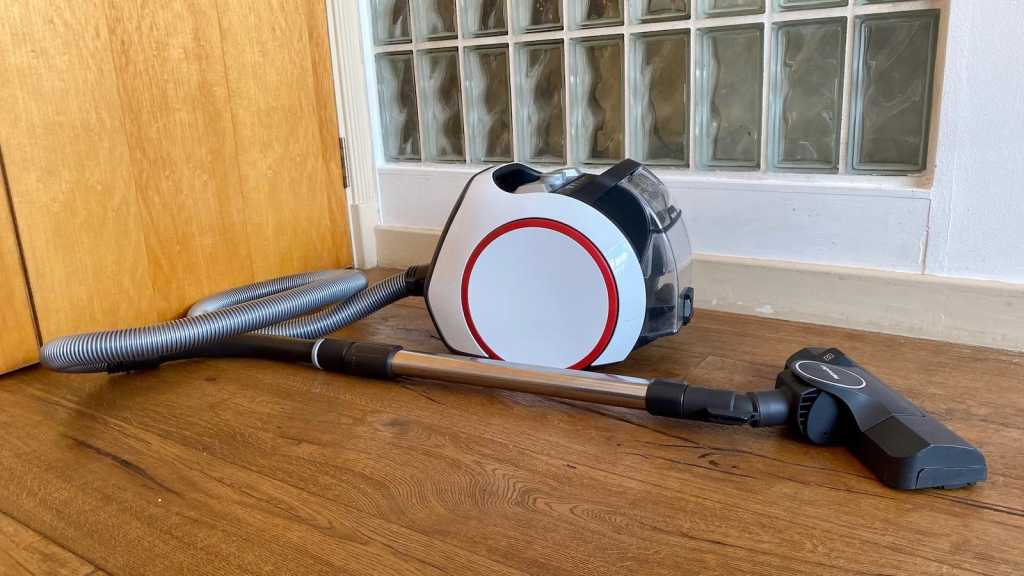 This is a well-designed vacuum cleaner that’s compact but powerful and pleasant to use. However, it’s much better suited to hard flooring than to carpets.

After a boom in cordless vacuum cleaners over the last couple of years, some recent launches have lured us back into the world of corded vacuum cleaners.

Why? After using a cordless cleaner, a corded vacuum feels extremely powerful. And it’s nice not to worry about having to charge it. But it’s also because brands have been putting development time into corded products to make them more compact and feature-packed.

Miele’s Boost CX1 is a corded vacuum cleaner made for smaller homes where space is at a premium but a blast of real power is still required.

The Boost CX1 is a compact but powerful canister vacuum cleaner. That’s really its USP: according to Miele, its footprint can fit within an open magazine (spoilers: it can). But although this makes the canister itself easy to move around and store, you still have to contend with the ungainly wand and hose, which are always much more difficult to find a spot for.

The handy park mode, which allows the wand to slot into the side of the canister and stand unsupported, goes some way to providing a neat storage option. 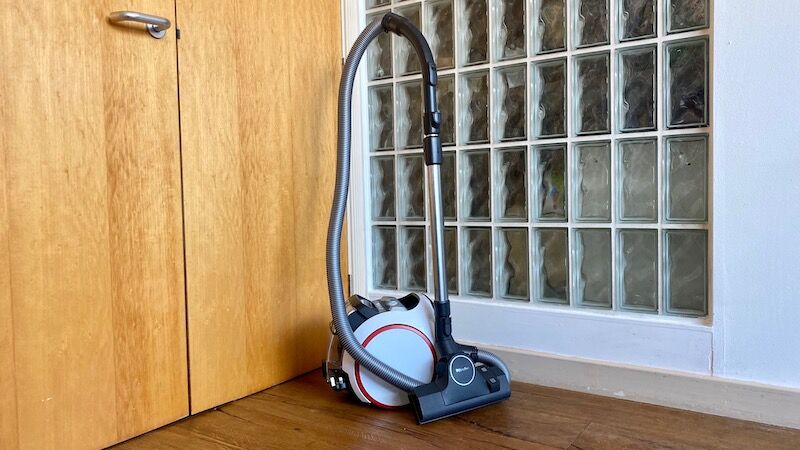 It’s also nicely manoeuvrable in use, with a front wheel that has a 360° setting, a tiny back wheel and the two large wheels built into the sides of the cleaner. The wand itself is adjustable in length, so you can find a height that’s comfortable for you.

It’s a bagless vacuum cleaner, with a large transparent dustbin. It pops out easily via the top handle, and when you come to empty it, the entire base of the bin flips open, so it’s easy to remove hair, dust and fluff without poking around. The dustbin filter can also be washed in the sink. 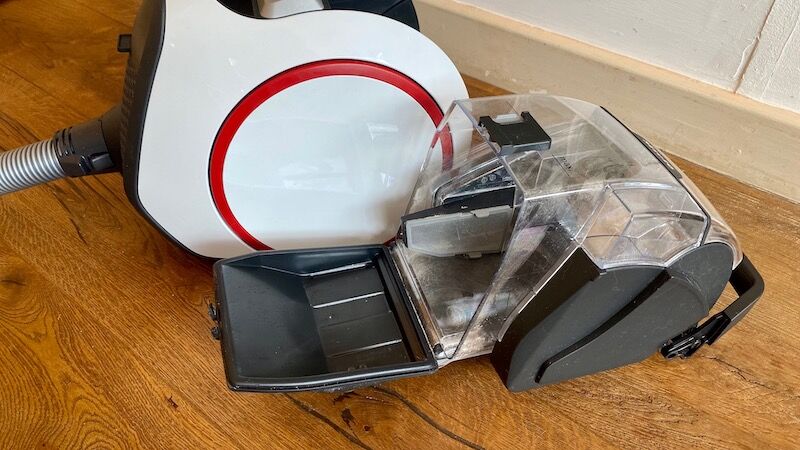 There’s a second filter system over the air outlet on the front of the vacuum cleaner. It takes the form of a removable honeycomb grill. Underneath it is a filter cartridge, also removable. It’s an effective system, with the expelled air smelling clean, not dusty. 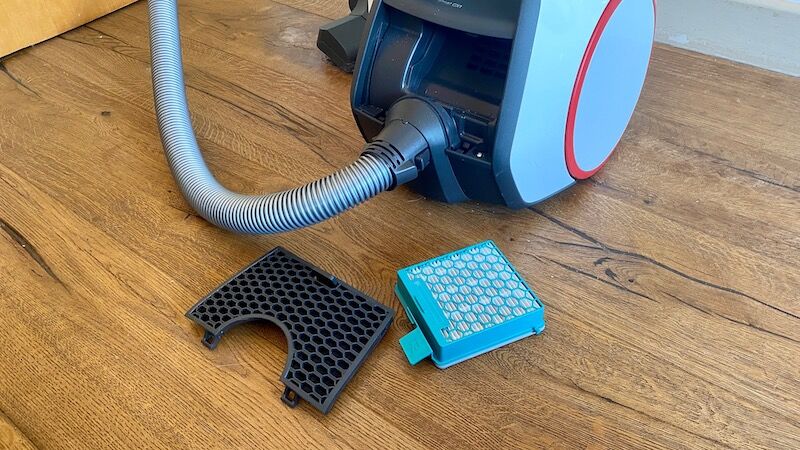 The controls on the Boost CX1 are simple. There’s an on/off button and a cord retraction button, both of which are large enough to be operated with a tap of your foot.

Between them is a power dial with four settings. 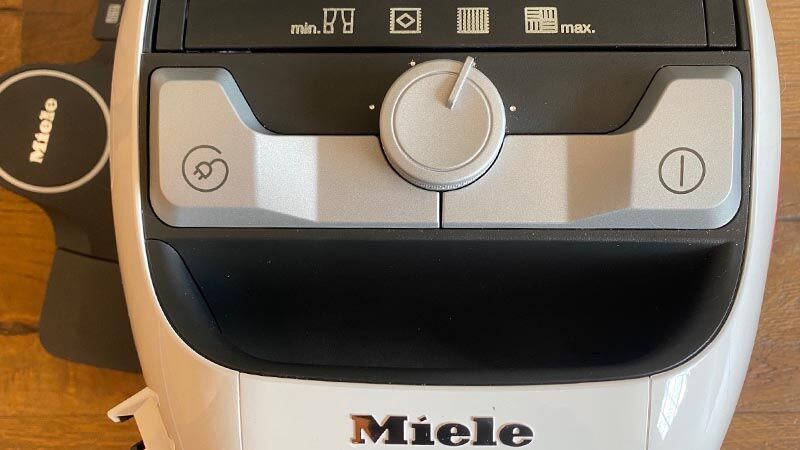 There’s no roller on the vacuum cleaner head. This will help to ensure that it doesn’t scratch floors, but if you have thick carpet and want one, you’ll need to go for the Dog & Cat model, which is £100/ $200 more. 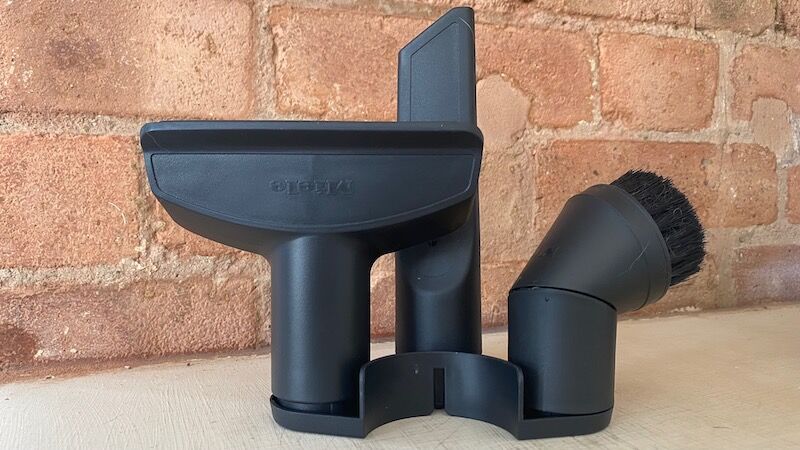 It comes with a simple set of accessories: a round brush head (excellent for removing pet hair), a crevice tool and a small wide-mouth tool. I have never been wowed by Miele’s vacuum cleaner accessories and this set is about as basic as they come.

Still, once again there’s thoughtful storage: the set clips onto the joint between the hose and the vacuum wand. 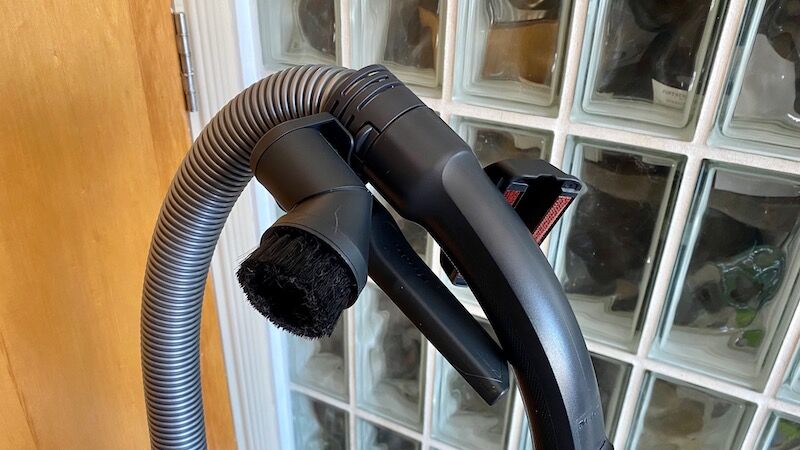 I found it too annoying to clean when they were attached but it was handy when it came to parking the vacuum.

In spite of this, I felt that the second setting was more than enough across all kinds of surfaces. At this level, it’s very quiet in operation as well.

The vacuum is easy to move around but the design of the wheels means that it won’t veer off or roll away. It’s also pretty much impossible to knock over.

The fact that the cable is long (6.5m) and retracts at the press of a button also helps to mitigate the annoyance of having a cord at all.

However, vacuuming stairs isn’t the easiest thing with the Boost CX1. The canister is square in shape and may be too wide to sit steadily on a step (it’s roughly 40 x 27 x 25cm). But even if it does, you’ll still have to move it up with you as you climb.

At least, thanks to its telescoping wand, you won’t need to lift the canister while you’re cleaning above your head, even if you’re vacuuming cobwebs from a high ceiling.

There’s another issue thanks to the lack of a roller in the cleaning head. It makes vacuuming carpets quite hard work as, even on the lower settings, the vacuum tends to stick. Between that and the friction, you have to exert quite a lot of force to push it over carpet.

Although this vacuum cleaner should work equally well on carpets and hard flooring, the truth is that it is much better suited to the latter.

All are better priced in the UK than in the US.

I’ve always found Miele appliances to be high quality, but I don’t recommend them as often as I’d like because of the accompanying high price tag, which puts them firmly in the luxury category. However, the reasonable price point of the Boost CX1 means it should have a wider appeal.

It’s beautifully designed and built to last. However, there are some caveats. This is not a vacuum cleaner that will make your life easier if you have acres of carpet or many flights of stairs. But if you mainly have hard flooring and are looking for a powerful, compact vacuum cleaner, the Boost CX1 is a solid choice.

For more vacuum cleaner options, and to see full reviews of our recommended buys, have a look at our round-up of the best vacuum cleaners we’ve tested.