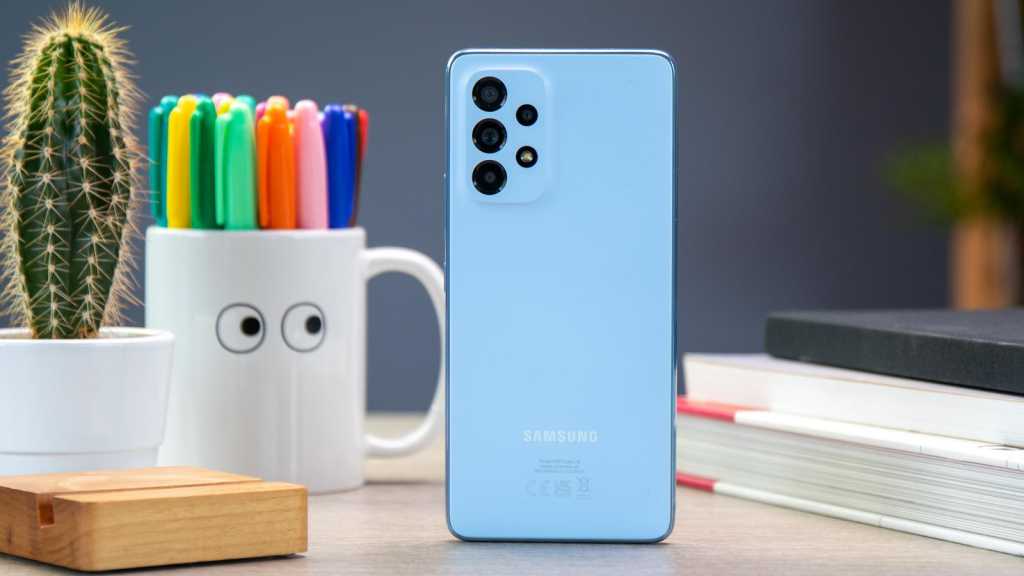 The Galaxy A53 is a brilliant mid-range phone, with an excellent display, top camera, and software support bested only by Apple. But it suffers from one massive flaw: poor performance. At this price a phone shouldn’t be so slow, and it makes the A53 difficult to wholeheartedly recommend.

Samsung’s mid-range phone game is, historically, pretty weak. So is Apple’s, to be fair, leaving it to Google and the Chinese smartphone giants to fill in the gaps.

When I first saw the Galaxy A53 I had my hopes that Samsung had turned a corner, offering a balance of specs, features, and stylish design that not only bests Apple’s latest iPhone SE, but could be a genuine rival to the best of Xiaomi, Oppo, and Honor.

I don’t mind holding my hands up and admitting I was wrong. Well, in part. I think the Galaxy A53 is a better phone than Apple’s SE, and there’s an awful lot about it that I like: a great design, excellent software support, waterproofing, and capable cameras.

But it’s let down by desperately disappointing performance that’s in fact worse than its immediate predecessor, the Galaxy A52s – so you should probably buy that instead.

One of the best things about the Galaxy A53 is its design. Most mid-range phones look either plain or downright ugly, but Samsung has made an effort to make this look the part.

Available in black, white, peach, or blue, this is built from plastic, but doesn’t try to hide it. Instead Samsung embraces the material with a smooth matt finish that curves up to meet the rear camera module – a design flair previously seen in the substantially more expensive Oppo Find X5 Pro.

On the front, the admittedly large 6.5in screen is surrounded by a black bezel that’s slim – though not the slimmest. It’s interrupted only by a small central punch-hole selfie camera.

One of the most unique elements of the A53 – given its price – is an IP67 dust and water-resistance rating. This is a level of protection that not even every flagship phone guarantees, and it’s a real rarity at this price. If you want that peace of mind when you’re on your phone in the bath, this is one of very few Android phones that offer it.

And while the phone’s rear is plastic, the display is protected by Gorilla Glass 5, which should add a level of security from drops and scratches too.

Overall, the design here feels simple, but never plain. It’s understated and attractive, with care taken to make this look and feel like a fairly premium device, albeit on its own terms.

As we turn to the phone’s screen, it’s still all good news. This 6.5in Full HD+ panel may be a little large for some tastes, though really it’s about typical in size for Android these days.

What’s not typical is the use of a 120Hz AMOLED panel. Like the IP rating, this isn’t unheard of for the price, but it’s definitely unusual, and places the A53’s screen in the upper echelon of mid-rangers.

This is a bright, attractive screen capable of excellent colour range and smooth scrolling. Thanks to the AMOLED tech used, it also packs in an under-display fingerprint scanner – which works pretty well, if a touch slowly.

Audio is also impressive, with stereo sound delivered by the included speakers. This is another oddity at the price, and together with the screen this will make the A53 a tempting option for anyone who sits on their phone watching movies or playing games.

Of course, there’s no headphone jack, but both USB-C and wireless headphones are supported.

This is the crux of the matter: there’s not much good I can say about the performance of the Galaxy A53.

While last year’s A52 and A52s both used mid-range Snapdragon 7-series chips from Qualcomm, for the A53 Samsung has opted to use its own new Exynos 1280 chipset.

This was not a good idea.

Benchmarks are unimpressive: while the A53 slightly edges the A52, especially in gaming benchmarks, it lags well behind the A52s, itself released just six months ago. Looking outside Samsung, performance is a close match for the Poco X4 Pro and OnePlus Nord CE 2 – both substantially cheaper phones – but comfortably behind the OnePlus Nord 2 from last year, which is a better match for it on price. It wouldn’t even be fair to compare to the iPhone SE, which uses the same chip as Apple’s current flagship iPhone 13 range.

Artificial benchmark scores don’t tell the whole story though. I reviewed the Nord CE 2 myself, and while its benchmarks are on a par with the A53’s, the OnePlus didn’t feature half the stuttering, lag, or slowdown that I’ve suffered through on the A53.

This phone is slow, whether you’re using one app or trying to multitask. RAM seems to be the main issue: despite my review sample boasting 6GB of memory the phone struggles to keep multiple apps running at once, and at times it’s frozen even when I’m just using Chrome.

It makes the phone frustrating to use, with the kind of experience I’d be annoyed by on a phone half this price.

Performance may vary depending on the market. While in the US and UK the phone ships with 6GB of RAM as standard, elsewhere you can buy it with 4GB (don’t) or 8GB. Similarly, storage is 128GB on my model but 256GB may be an option where you live. In either case, storage can be expanded by up to 1TB via microSD card.

It’s not all bad. 5G is supported, as is NFC for card payments and Bluetooth 5.1. The Wi-Fi 6 support in its predecessor has been dropped for the previous gen version, though it’s unlikely that you have a Wi-Fi 6 router to take advantage anyway.

Samsung has essentially left the camera setup unchanged from the A52 and A52s, though with so much of modern smartphone photography handled computationally, the change in chipset could still have an impact on photo quality.

There’s no real cause for concern though. The main 64Mp camera is capable of really bright, punchy shots in good light, and thanks to a wide f/1.8 aperture and optical image stabilisation it holds its own in dimmer conditions too, preserving detail and contrast nicely.

Quality certainly drops when it gets really dark, and this is still where flagship phones pull apart from the pack. But I’d be surprised to see many phones at this price do much better than the A53 has.

That 64Mp main sensor is flanked by three more: an 8Mp ultrawide, 5Mp macro, and 5Mp depth sensor. The latter simply helps with portrait shots, while the first two are inevitably situational, but don’t do badly. The ultrawide in particular takes more vibrant, colourful shots than I’d expect from rivals, though there’s a definite drop in detail compared to the main camera.

On the front, the 32Mp selfie camera is a surprise highlight. Selfies pack in loads of detail and great colour range, even in challenging lighting. I’ve taken worse selfies on phones twice this price, and this camera is a real strength for the phone.

As for video, you can shoot at up to 4K@30fps from either the front or rear camera, and the OIS on the rear lens keeps things nice and stable when recording off the main camera.

The A53 impresses on pure battery life, with a generous 5000mAh cell. I’ve found the phone comfortably lasts a full day, and light users will probably find it can stretch to two.

In my case, I’ve found the phone is often still above 50% battery by the time I get to bed, and is happy to deliver several hours of screen-on time during the day.

Charging is less exciting, but that’s as true for Samsung’s most expensive phones as it is for this one really.

Wired charging is limited to 25W speeds – resolutely sluggish by modern Android standards, even among cheap phones. Samsung also doesn’t include a charger with the phone, so you’ll have to buy your own. Using a third-party 65W charger (so comfortably faster than the phone’s max) I only reached 26% charge after thirty minutes plugged in, meaning this will need topping up overnight most of the time.

There’s no support at all for wireless charging. That’s typical for the price, but worth mentioning given that this one area where the iPhone SE excels.

Let’s end on a high note – and the main real reason to opt for this phone over the previous A52s.

The Galaxy A53 ships with Android 12, the latest version of the Google OS, running Samsung’s One UI 4.1 skin on top.

You’ll get Google’s updated privacy controls – including icons and alerts when the microphone and camera turn on – along with Samsung’s implementation of the Material You tool which draws UI colour palettes from your wallpaper.

Of course, I have my concerns that the software is really what’s at fault for the phone’s middling performance. Samsung’s heavy interface can sometimes be sluggish even on high-end devices, and the sluggishness moving around the phone and opening apps can almost certainly be explained in part by the One UI software layer.

At least that means things might get better. Samsung has promised that the A53 will receive four Android version updates – from Android 13 (with One UI 5) through 16 – along with a fifth year of security patches. This is the same update promise it offers for its most expensive phones, and is unheard of at this price for Android. In fact, this is a better software support guarantee than offered by anyone except Apple.

That makes the A53 an excellent choice if you’re looking for an affordable phone that will be supported in the long term. The only risk is that some of those updates end up worsening the already iffy performance – though this is a gamble, as Samsung could equally use patches to optimise the phone and improve how it runs.

At £399/$449/€449, the Galaxy A53 is firmly mid-range. You can pick it up from Samsung’s online store, Amazon, or most tech retailers – or major networks including T-Mobile, Verizon, and AT&T in the US; or Vodafone, O2, EE, or Three in the UK. If you’re tempted, we’ve rounded up the best Galaxy A53 deals we can find to help you buy it at the best price.

Its clear rivals in Europe and Asia are the excellent OnePlus Nord 2, the cheaper Poco X4 Pro, and the slightly pricier Realme GT 2. The Pixel 6a will also be a compelling alternative once it launches in July, and Apple’s iPhone SE sits at a comparable price worldwide.

With flagship-style features like an IP67 rating and OIS on the main camera, the Galaxy A53 offers plenty that its closest Android rivals don’t – and the modern design and excellent display give it a clear edge over the clunky, old-fashioned iPhone SE. Unfortunately all those phones will deliver smoother performance than Samsung’s.

The Galaxy A53 really only has one flaw, but it’s such a big one that it makes the phone difficult to wholeheartedly recommend.

Performance is sluggish, with stuttering and freezing common even during light use. At this price, a phone should run better.

That’s a shame, because Samsung has nailed it elsewhere. The A53 looks great, it’s well-built, the camera and display are among the best at this price, and the software support is bested only by Apple.

With a more powerful processor and smoother software the A53 would be a no-brainer. But as it is, this will only be an option for the patient.