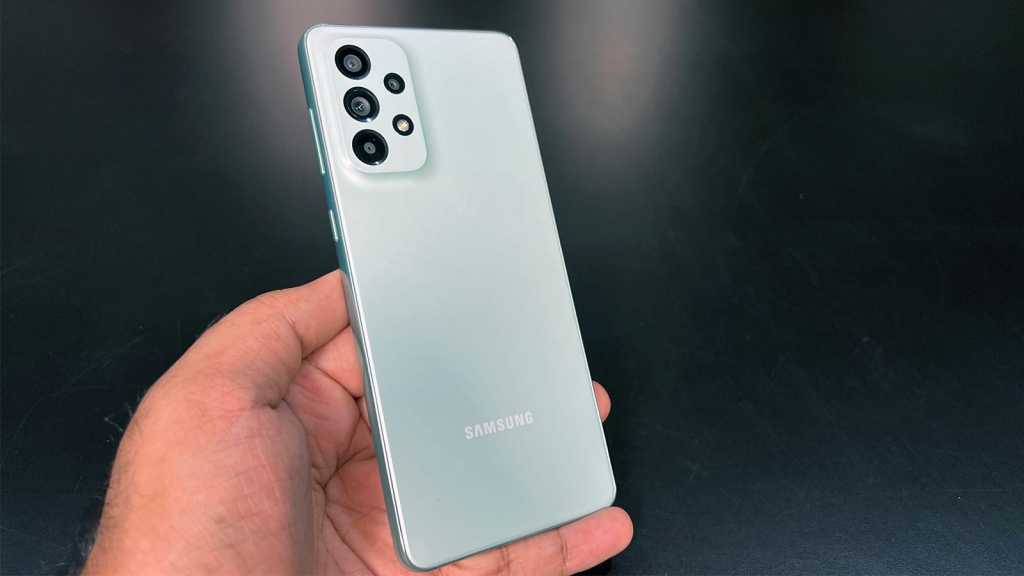 The Galaxy A73 5G is a capable, fully equipped mid-range 5G device with a premium price tag let down by dated internals and sub-par charging. Highlights over rivals, though, include IP67 waterproofing and long software support.

The Galaxy A73 5G is the successor to last year’s Galaxy A72 which lacked 5G support and is the latest device in Samsung’s A-series of mid-range devices. The A72 was an attractive proposition last year despite lacking in some departments.

Samsung is sticking to the same tested formula with the A73 5G and this review aims to find out if the A73 is a significant improvement over the previous generation. At the time of this review, the device is available only in India from ₹47,490 and is expected to launch in select markets worldwide.

The phone weighs 181g and is only about 7.6 mm thick which means that the device is very comfortable to hold and handle despite it being a large screen device. The build quality is good but feels plasticky.

The back doesn’t attract fingerprints easily, but the camera bump is noticeable. The phone is IP67 rated which means it can stay under 1 meter of freshwater for up to 30 minutes. The unit reviewed came in the Awesome Mint colour but you can also get it in Awsome Grey and Awesome White if you prefer.

The device uses an in-display fingerprint scanner which works as expected but considering the device design, one would expect the fingerprint sensor to be located on the power button on the side.

The SIM tray is at the top and lets you use up to 2 nano-SIM cards in Dual-SIM configuration or 1 SIM and a microSD card up to 1TB. The omission of a 3.5mm headphone jack was expected considering the thin profile of the device but a USB-C adapter in the box would have been nice but is missing.

Overall, the design is subtle and simple which most users would appreciate.

The A73 packs a 6.7in Full HD+ Super AMOLED+ Infinity-O display. The refresh rate which Samsung calls Motion smoothness can be manually configured to 60- or 120Hz and there is no auto-switch option although power-saving modes downgrade the refresh rate.

Always-on display can be enabled for those who like to check their notifications and key information without having to turn on the screen. There are minimal bezels around the display and underneath the display is a 32Mp punch-hole selfie camera which does take up slightly more space than usual.

The audio from the speakers is underwhelming and the phone doesn’t offer much volume. Dolby Atmos does help in a minor way but don’t buy this one if you want to have a party without connecting a Bluetooth speaker.

The phone is powered by an Octa-Core Qualcomm Snapdragon 778G processor and is paired with 8GB of RAM. Then there’s a choice of 128- or 256GB and although there’s only ₹2,500 between them, the latter only comes in the Awesome Mint colour.

The variant tested in this review comes with 8/128GB and there was no noticeable lag during regular usage.

The 778G is not a bad processor, it is a great chip for mid-tier 5G phones and is based on the TSMC 6nm node. It is a slight downgrade from the Snapdragon 780G which is based on 5nm.

However, the real deal-breaker is that phones that cost almost half the price of the A73 5G are using the same chip. Phones which are priced similarly pack the latest Snapdragon 8 Gen 1 or Snapdragon 888 SoCs which offer a big jump in performance and justify the pricing.

The A73 does not feel slow by any means, and it performs well, One UI has been optimized. But when you are getting last year’s internals for a premium mid-ranger, the A73 offers poor value in the performance department, even if you do get 5G.

Also, the phone did get moderately warm to the touch during video capture, gaming, or GPS usage. There is support for Wi-Fi 6 and the notification tray icons reflect it when connected to faster WiFi networks.

The main camera is a 108Mp sensor with f/1.8 aperture and images are shot at 12Mp by default thanks to pixel binning. Photos taken in daylight or under good lighting conditions come out well and not much to complain about here. You can toggle between 0.5x zoom which uses the ultra-wide sensor and 1x zoom on the main sensor.

Samsung has done away with a zoom lens on the A73 in favour of that 108Mp main sensor. There is the ability to use digital zoom up to 10x, but the results are not too impressive. The tips within the camera UI are useful for mode recommendations and shot suggestions.

There are three other cameras on the back in the form of a 12Mp ultrawide and 5Mp depth and macro lenses.

The 12Mp ultrawide lets you capture a lot of area in a single frame but some details are lost towards the sides. The macro mode does get some good closeup shots but requires you to get very close to the subject and the camera does not automatically switch to macro, though the camera app does prompt you.

The portrait feature which is available on both the front and rear cameras lets you capture some neat portraits. The ability to tweak the bokeh, and lighting after the photo has been captured is nice to have.

Low-light shots are not up to the mark and require the phone to be held firmly to prevent blurry shots.

The front-facing 32Mp camera does take decent selfies and portraits when the lighting conditions are good, and you can wave your hand to take a selfie.

In terms of battery life, the 5000mAh built-in battery can last an entire day with heavy usage with 120Hz refresh rate enabled and can go longer if with 60Hz and heavy usage. Samsung does offer some software tweaks under the hood to help with battery management.

The Power saving feature lets you turn off Always On Display, downclock the CPU to 70%, disable 5G, and background app activity with a single setting.

In the PCMark Work 3.0 battery test, it lasted 12 hours and 42 mins which is impressive. Samsung chose to not include a 25W charger in the box which would charge the phone at maximum speed.

I tested several chargers and only a few which are PD compatible charge the phone at the rated speed. With this, the phone managed to get to 34% in 30-minutes which is slow for modern standards.

Wireless Charging is not available and would have been nice to have considering the audience the device is catered to.

The phone runs Samsung’s One UI 4.1 which is based on Android 12 and the overall interface is smooth and lag-free. You can customize the UI according to the usage very seamlessly and this is where One UI shines. You can even remap the Bixby side key to the power button if you should desire to use Bixby.

Glance on the lock screen can be annoying to most users and disabling it requires diving into the settings. While most pre-loaded apps can be uninstalled some apps such as Samsung Max cannot be uninstalled.

While most preloaded apps can be removed by resetting the phone, some apps like Moj and MK Taka Tak are reinstalled automatically which is infuriating. There are multiple prompts during setup for the installation of additional apps and users need to be careful to opt out.

The Samsung Galaxy A73 5G was introduced in India in April and it is available in two models. Oddly, the 256GB capacity is only available in the Awesome Mint colour.

You can buy it directly from Samsung but Amazon, at the time of writing, only has one model. Flipkart has a much better range, though.

In terms of the competition, the A73 competes with the OnePlus 9RT, Xiaomi 11T Pro, Pixel 6 and Realme GT 2 Pro.

The Galaxy A73 5G is packing an old processor and feels overpriced compared to rivals in that respect, combined with fast charging is limited to 25W and Samsung doesn’t even include a matching charger.

This is surprising when the competition offers up to 120W fast charging and includes it in the box. The A73 does rely heavily on the Samsung brand value and promise of 4 years of updates.

Despite the bloatware, One UI is a treat to use, and Samsung Pay is good to have. The phone also has an excellent screen, IP67 waterproofing and the cameras are decent on the whole.

If you are a Samsung user looking for a mid-range 5G device, the A73 is a reasonably good option but it is worth pointing out that there are more powerful rivals out there if that’s more important to you.