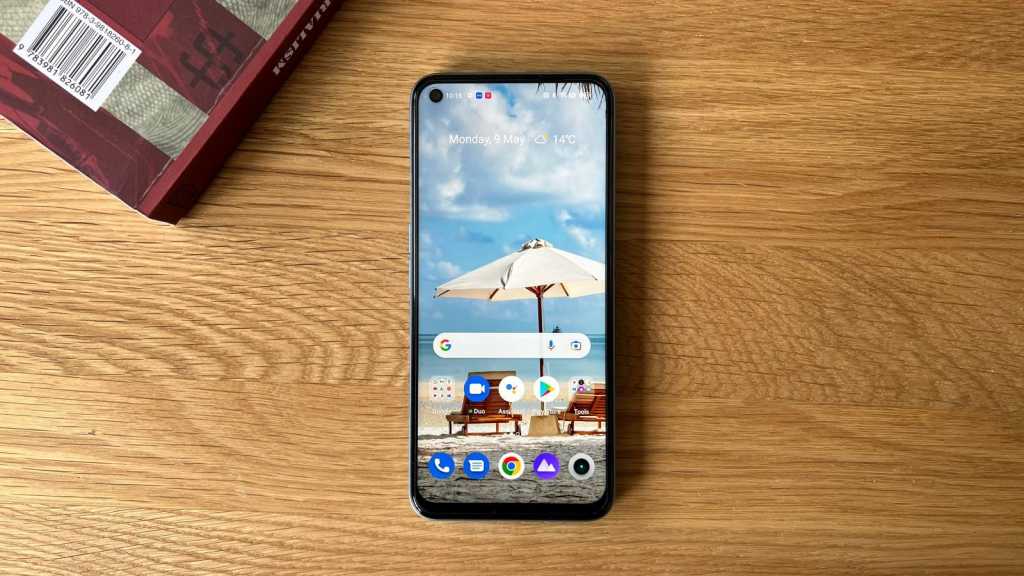 The Realme 9 Pro is a good all-round Android that won’t hurt your wallet. Despite a sometimes inconsistent camera and ok performance, it provides excellent battery life, user-friendly software and a sharp design.

Realme is back this year with its 9 series, which features three different smartphones: the 9i, 9 Pro and 9 Pro+. It’s the middle chile on test in this review, looking at everything from the flashy design and 120Hz display to its 5000mAh battery and solid performance.

So, how does it compare to its siblings, as well as other smartphones in its price range? Let’s find out.

The Realme 9 Pro may be an affordable Android, but it punches above its price tag as far as its design goes. This is defined by a plastic rear with a scintillating Light Shift Chameleon paint job, coming in either Aurora Green, Midnight Black or Sunrise Blue. What this means is that it changes colour and tone when catching the light from different angles, creating a kind of phosphorescent sheen.

Aside from the eye-catching rear, the Realme 9 Pro features an edge-to-edge 6.6in touchscreen with relatively narrow bezels and a punch-hole selfie camera in the top-right of its display. Volume buttons are on the left-hand side of the phone while the power button-cum-fingerprint sensor is on the right.

In contrast to iPhones and some more recent Androids, the phone thankfully carries a 3.5mm headphone jack, findable on the left-hand side of its bottom edge where you’ll also find the USB-C port.

The Realme 9 Pro measures in at 164 x 76 x 8.5mm, making it (counterintuitively) bigger than the Realme 9 Pro+, but smaller than something like the Redmi Note 11 Pro+ or the iPhone 13 Pro Max.

It weighs 195g, so 13g heavier than the 9 Pro+. However, it’s still noticeably lighter than many other devices in its bracket, and while it’s a relatively large phone, it never once felt too cumbersome or ungainly in my medium-sized hands.

Despite having a pleasing design and solid build the phone falls down a little in terms of its durability. It lacks an official IP rating, so owners should probably be careful with it around water and sand or dust.

The Realme 9 Pro uses a 6.6in display, with a 20:9 aspect ratio and a resolution of 2412 x 1080 pixels. Interestingly, the LCD IPS panel is in contrast to the Super AMOLED screens you can find on the Realme 9 and Realme 9 Pro+ (though they are both 90Hz).

Despite having only an LCD panel, the 9 Pro’s display is decent enough, without being spectacular. Videos and images are crisp, while the support for a 120Hz refresh rate makes scrolling smoother, although perhaps not as smooth as you see with other 120Hz Androids with more powerful processors.

It’s a similar story with the display’s brightness. Averaging at around 430 nits, it’s bright enough as far as affordable Android devices are concerned, yet most users will encounter instances where they need to manually adjust the screen to make images or videos more legible.

There is an auto-brightness feature, which is generally responsive enough to changes in ambient light, while the Eye Comfort mode – which filters out blue light – also makes the overall visual experience a pretty decent one, for the price.

The speaker sounds surprisingly good for music and movies, so long as you don’t crank the volume too high. Sure, it can’t compete with stereo phones, but if you’re short of earphones the phone can do a job for you every now and again.

The phone employs 6GB of RAM as standard, although my review unit benefitted from 8GB, which will cost a bit extra (although 8GB appears to be the only option in the UK).

It also offers 128GB of UFS 2.2 internal storage, with no option to have a slightly more expensive model with 256GB or 512GB of memory. Fortunately, you can find a microSD card slot in the SIM card cavity, enabling users to save more files and apps.

Overall, performance is decent without being exceptional. Most apps launch quickly, while the phone can usually handle having multiple apps open at the same time. As far as games go, playing PUBG Mobile and Need for Speed No Limits present the Realme 9 Pro with no real difficulties, although I did occasionally notice some lag when playing Need for Speed.

As such, gamers who intend to play the latest, most intensive titles may want to consider looking at more powerful models.

The Realme 9 Pro’s benchmarks are fine for a phone in its price range, although they’re hardly spectacular. A number of its rivals beat it in most categories, including the OnePlus Nord CE 2 5G, Redmi Note 11 Pro 5G, and Poco X4 Pro.

It is generally faster than the cheaper Redmi Note 11 though, as well as the Realme 9i, as you’d expect.

The Realme 9 Pro’s rear camera setup includes a 64Mp main shooter with a f/1.8 aperture (the popular Sony IMX766 we’ve seen on lots of phones), an 8Mp ultrawide lens, and a 2Mp macro lens. It also features a 16Mp selfie camera with an f/2.1 aperture on its front.

This kind of triple-lens setup is in line with much of the mid-range Android market right now, yet unfortunately the Realme 9 Pro doesn’t quite keep up with most of its peers. While its 64Mp main lens can take some very rich and colourful photos in good natural light, its quality tends to dip in almost all other conditions.

For instance, clouds can tend to look too oppressive and dark on overcast days, in a way that disturbs the overall balance of pictures. Likewise, the camera also doesn’t cope too well with low light and darker conditions, with noise and a loss of detail infiltrating photos as the evenings mature.

This is particularly the case at night, even when using the dedicated Night Mode. Still, if you know how to frame your shots and choose the right environments, you can take some rewarding pics.

The 8Mp ultrawide lens is useful in taking the odd panoramic shot, such as landscapes and natural areas. Again, pictures can be pretty if you have enough patience, but with fewer megapixels, it doesn’t provide as much detail or clarity as the 64Mp wide lens. Then again, it compares well enough to ultrawide lenses on other affordable Androids, and it does come in handy every now and again.

The Realme 9 Pro also offers a few special camera modes, including an Ultra Macro and Starry Mode. As its name suggests, Ultra Macro is designed for close-ups, and is used with the 2Mp macro lens. Unfortunately, most close-ups I took with the main 64Mp lens were noticeably more accomplished and shareable than those I capture using Ultra Macro, so most people will probably find little occasion to use it.

Something similar goes for Starry Mode, which uses AI to make shots involving the night sky more, well, starry. It’s a nice enough add-on, but you do actually have to hold the camera still for just over four minutes to use it, so it won’t be for everyone.

All in all, the Realme 9 Pro is a good phone for taking straightforward photos that can be shared on social media and kept as memories. Its 16Mp front-facing lens is also effective at taking flattering selfies, particularly when used with Portrait Mode. However, if you want to do more with it, you may be left feeling a little bit disappointed.

Turning to video, the phone tops out at 1080p at 60fps, so no 4K or 8K cinematography for the film buffs out there. Videos shot using the phone still look presentable, although there’s no optical image stabilisation (OIS), so you will need a steady hand or some kind of tripod if you’re serious about what you’re filming.

The Realme 9 Pro’s 5000mAh battery is one of its biggest selling points, with the phone capable of surviving long stints without needing a recharge. Very light users can last two or three days without reaching 0% charge, while heavier users will easily make it through 24 hours before having to get the charger out.

In the PCMark Work 3.0 battery test, the phone lastest a whopping 18 hours and 30 minutes, even with its display set to 120Hz. This is largely thanks to that efficient 6nm Snapdragon chipset.

The phone also comes with a 33W mains charger, which is capable of fast charging. While it doesn’t compare to the super-fast chargers we now see with OnePlus and Xiaomi phones, for instance, it can go from empty to 100% in about one and a half hours.

In our usual 30-minute test, the Realme 9 Pro reached a decent 50%, so while it isn’t the fastest, its charging capabilities should please all but the most impatient or time-starved of users.

Wireless charging fans may be disappointed though since the 9 Pro doesn’t support this. Still, with a capacious battery and a fast enough mains charger, it really does offer great value for its price.

In contrast to other affordable Androids like the Xiaomi Redmi Note 11 range, the Realme 9 Pro operates on Android 12 right out of the box, with Realme UI 3.0 running over it. The latter isn’t one of the most exciting Android skins available at the moment, but it does have the advantage of being simple to use, with a clear and uncluttered interface.

The advantage of having a relatively straightforward operating system is that it tends to work smoothly, with little in the way of slow loading times or unresponsiveness. Everything is appreciably fast, from opening apps to changing settings.

An added bonus is that I rarely encountered any unwelcome freezes or hitches, with Wi-Fi connections remaining intact and notifications being delivered when they should.

Despite its comparative simplicity, Realme UI 3.0 does offer scope for customisation and personalisation. Its colour scheme and fonts can be changed to suit the user’s tastes, while icons can be resized to give the OS a different feel.

On top of this, there are a small handful of special features, including floating windows, a Kid Space for limiting your child’s usage of the phone, as well as a Simple Mode for streamlining things even further.

One negative, however, is that Realme appears to be promising only two years of core software updates for the 9 Pro. This means users will reach only as far as Android 14, at which point owners will have to upgrade if they want to stay current. That said, they will receive two additional years of security updates, so the phone will remain perfectly usable after it receives its final core upgrade.

You can buy it from the Realme store as well as Amazon.

The phone isn’t available in the United States or the rest of the Americas, but it is officially for sale in India from ₹18,999 and elsewhere in Asia.

Other potential alternatives can be found in our articles on the best Realme phones and the best mid-range phones.

The Realme 9 Pro arguably has a misleading name, given that its camera and performance don’t always operate at a professional standard.

Still, it earns its place among other affordable mid-range Androids for a number of reasons, with its enduring battery, enjoyable display and easy software arguably enough to sway users who prefer practicality over state-of-the-art power.

Just make sure you check out the competition as there are many great phones around this price point.