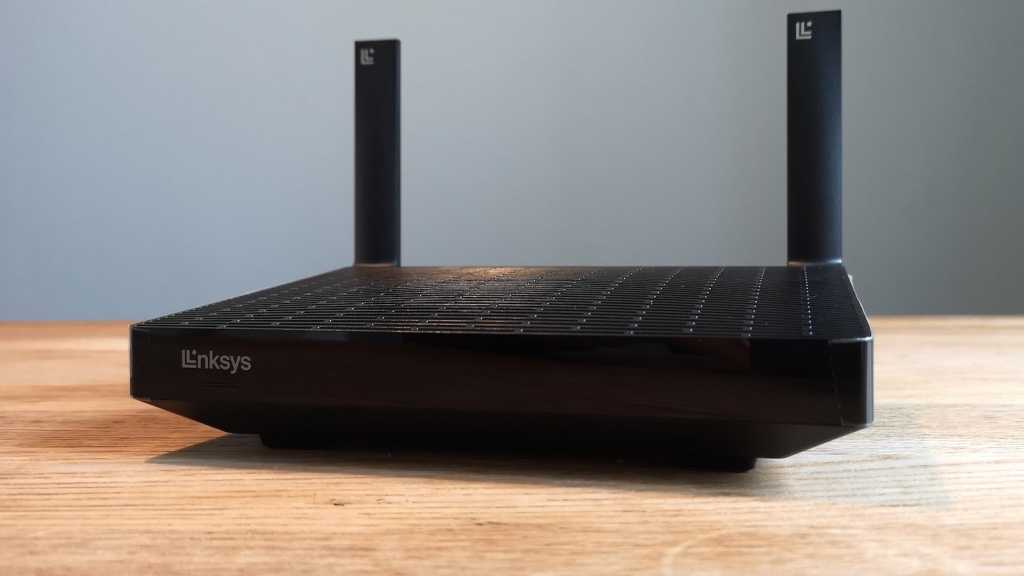 Small, but packed with potential, the Linksys Hydra Pro 6 is a competent Wi-Fi 6 router that’s well priced (in the UK at least), and can be expanded into a mesh Wi-Fi system later. But that approach isn’t necessarily the cheapest way to get mesh Wi-Fi.

The Linksys Hydra Pro 6 is the latest entry-level Wi-Fi 6 router from Linksys, offering buyers with limited budgets a decent Wi-Fi experience without breaking the bank.

It’s an AX5400 device, meaning it ought to give you faster 5GHz Wi-Fi speeds than other Wi-Fi 6 routers for a similar price. Indeed, the Linksys Hydra Pro 6 is essentially an upgrade of last year’s Linksys MR7350 router, which is an AX1800 device.

Like the MR7350, the Hydra Pro 6 is a router that can form part of a mesh Wi-Fi system. It can work as a standalone router, or you can pair it with mesh Wi-Fi satellites from Linksys’s Velop range.

This means if you want whole-home coverage in the future, but your budget can’t currently extend to cover a multi-device mesh Wi-Fi system such as the Linksys Atlas Pro 6 (which ranges from £320-£430 / $349-$449 for 2-pack and 3-pack bundle respectively), then the Linksys Hydra Pro 6 might be the ideal stand-in for the time being.

Alternatively, if your coverage needs are a bit more modest, you’re living in a flat (apartment), or somewhere with thin walls, and you merely want a decent Wi-Fi 6 router for around £200 / $300, then the Hydra Pro 6 should cater for your needs.

The Linksys Hydra Pro 6 looks a lot like the router from last year it’s effectively replacing, the Linksys MR7350.

It features the same basic blocky design, the same staggered rectangular mesh covering on the top, and vents on the bottom and sides in the same places. The only immediately noticeable difference is that the Linksys ‘L’ logo is stamped onto the external antenna. The antennas can be rotated and tilted 180 and 90 degrees respectively.

It’s likely that you’ll be setting this device up in your living room, or somewhere close to your modem (this router doesn’t contain one) and master socket, and it’s therefore also likely that you’ll have games consoles, TV set-top boxes, smart TVs and maybe a soundbar, all of which could benefit from wired Ethernet connections, so four ports should come in handy.

The only other physical connection on here is a Type-A USB 3.0 port, which you can use to connect a hard drive which can then be accessed through the Hydra Pro 6’s admin portal.

Despite being made of fantastic plastic, the Linksys Hydra Pro 6 doesn’t feel cheap: it feels reasonably sturdy.

Linksys has done a good job of making the Hydra Pro 6 easy for newcomers to set up from scratch. The Linksys mobile apps (iOS, Android) do a good job of guiding you through the process, covering the basics of router placement – ‘Place out in the open’, ‘Avoid hiding inside of behind furniture’ – to making sure your modem’s turned off before you power the router on and connect it to the modem. Once the connection’s established and you have internet access, the app will ask you whereabouts in the home it’s placed (e.g. living room, kitchen), which basically paves the way for you to add Linksys Velop mesh satellites in the future.

Setting up the Hydra Pro 6 took less than ten minutes, although the longest part was waiting for internet access to be available – so your mileage may vary here, depending on your provider and service.

Once everything’s set up, the Linksys mobile apps also let you dive into the Hydra Pro 6’s settings and check on the devices currently connected.

You can choose to prioritise up to three devices on your network, which is helpful if you’ve got lots of devices all straining for bandwidth at the same time. You can also rename devices as they appear on the dashboard, and apply parental controls, which can restrict certain devices from accessing specific domains, and apply homework hours. You can quickly and easily create Guest Wi-Fi networks for times when you have people over and you don’t want to hand out your regular password.

The Linksys Hydra Pro 6 broadcasts one SSID by default, but if you want to separate the bands and have the router broadcast two names, one for 2.4GHz and one for 5GHz, you can, but you need to open up the desktop control panel for this, as you can’t do it in the mobile app. You can also enabled WPA3 encryption instead of WPA2 (or a mixture of the two) if you have any devices which support the newer encryption standard.

All of these features are fairly standard, and they’re easy to access and set up. For example, my Nintendo Switch simply appeared as ‘networkDevice’ on the dashboard until I renamed it, and renaming devices is a simple case of heading to Devices and then clicking on the text – you can then type in whatever you want.

Overall performance of the Linksys Hydra Pro 6 is good. If you’re working in the same room as the router, you’ll be able to enjoy some fast wireless speeds, especially if you’re using a recent phone or laptop that supports Wi-Fi 6. If you’re living and working in a large home, and want coverage in every room, you will want to invest in some Velop satellites, however.

Interestingly, in my speed tests the results I got were either on par with what I observed with the MR3750, or in some cases, slower. As you’d expect, they were considerably faster than Virgin Media‘s Super Hub 3.

One interesting observation was that the Hydra Pro 6 was better was at connecting to my (old) Huawei Mate 10 Pro, a Wi-Fi 5 device, in more areas around the home, suggesting better coverage than the MR3750.

For example, in the upstairs office (located roughly 15 metres away and one floor up from the router) and in the garden (stood 20 metres away, with two walls and two shut doors between the client and the router), the Mate 10 Pro struggled to connect to the Linksys MR3750. But there were no such problems connecting to the Hydra Pro 6 on the same device in those  locations.

I also found that the Hydra Pro 6 automatically shunted the Mate 10 Pro to Channel 11 (a 2.4GHz channel) when performing speed tests upstairs or out in the garden, whereas the other two phones – Realme X50 and Pixel 6 –  were kept on Channel 44 (a 5GHz channel). This is an example of the Hydra Pro 6’s band steering in action, choosing the best radio frequencies on a per-device basis.

Rather than use separate SSIDs and force the Hydra Pro 6 to use 2.4GHz or 5GHz, we used the default settings, as most buyers will, and ran speed tests in four locations and allowed the router and phones to decide which frequency to use. Here are the results:

Oddly, the speeds recorded on the Realme X50 (a Wi-Fi 6 phone) were not as good (except at 1m), and while the Google Pixel 6 (see below) recorded faster speeds, they were barely any different to what I recorded on the MR3750 last year.

The only exception was when stood 1m from the router. On occasion, it would move from channel 44 to 100 and use 160MHz to boost speed to 1161Mbps. The 920Mbps figure is the average from all tests. Note that you cannot enable or force the Hydra Pro 6 to use 160MHz all the time.

Regardless of speeds actually achieved, the Hydra Pro 6’s range is surprisingly good considering it’s a solo device. It was able to deliver 5GHz coverage in areas of my home where I often struggle to get a useable connection on either radio band.

While it’s not really capable of delivering useable whole-home coverage in my two-up, two-down terraces home in South London, it’s not intended to, so it’s not really fair to mark it down for that. And, naturally, in larger homes, you’ll want to consider mesh Wi-Fi to get a fast connection throughout.

If you wanted to use the Hydra’s mesh capabilities, you will need to invest in a separate Linksys Velop node, perhaps something like the Velop MX5300 or Velop MX4200.

Of course, if you are considering mesh Wi-Fi, don’t forget that you can use them with your existing router. And as they connect to your router via Ethernet, as long as it has gigabit Ethernet ports, there’s no reason to upgrade it. The main advantage of the Hydra Pro 6 is that it becomes a node, meaning you might require a 2-pack Velop system rather than a 3-pack. However, the overall cost isn’t much different than keeping your old router and buying a Velop 3-pack.

It then becomes about whether you value the ability to manage your home network through Linksys’ app which is probably better than your older ISP-supplied router.

The Velop, though, isn’t the only mesh Wi-Fi system. Something like the Amazon Eero 6, or the Netgear Nighthawk Mesh Wi-Fi 6 system might be better suited to your needs, although these devices don’t give you much in the way of Ethernet ports.

There are cheaper options if you don’t need such fast speeds. And, arguably, if you have relatively slow broadband (under 100Mbps, say) then a pricey Wi-Fi 6 mesh system is probably overkill. For recommendations, see our separate roundup of the best mesh Wi-Fi systems.

Linksys has a web page for the Hydra Pro 6 on its UK site, but you can’t but it from the company directly.

Instead, you can purchase Hydra Pro 6 from Broadband Buyer for £197, eBuyer (out of stock), Ballicom for £194, or Amazon UK for £125. Obviously, Amazon is the obvious place to buy one, then.

Best Buy also sells the Hydra Pro 6 for $299.99, but Amazon is again the place to look, with the router costing under $180 when we checked..

As far as we know, it is not available in Australia.

The Linksys Hydra Pro 6 offers good performance, has a lot of useful features and represents good value for money.

The option to expand your home network’s coverage using Linksys Velop mesh Wi-Fi units might appeal to some, especially those that can’t afford the upfront cost of such a system right now.

However, there are plenty of affordable mesh systems that can replace your existing router’s Wi-Fi for not much more money than the Hydra Pro 6, and they are a better choice if your priority is huge Wi-Fi coverage but not outright  speed.