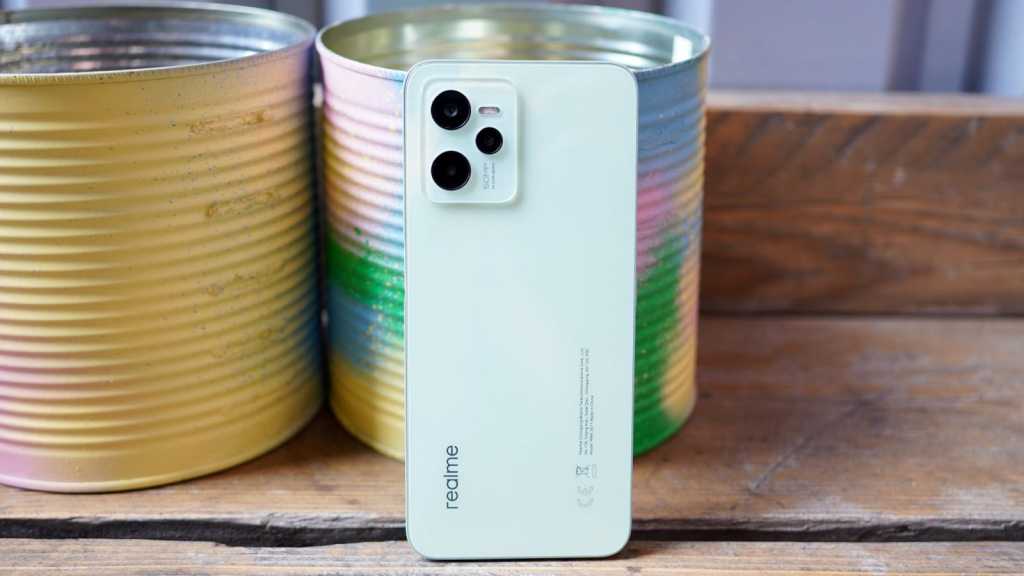 Realme has made some thoughtful, meaningful decisions with its latest budget phone, most notably design and an LCD display that lacks in refresh rate but punches well above its weight in picture quality.

While the likes of OnePlus and Xiaomi have been grabbing a lot of attention in 2022, rival Chinese brand Realme has quietly been having a bit of a stormer.

The Realme 9 Pro+ is one of the best mid-range phones on the market, while the Realme GT 2 Pro has made quite a splash further up the market. Now the Realme C35 is here to try and disrupt the budget phone sector in a similar fashion along with the even cheaper Realme C31.

While it’s entering a perilously low-margin sector, I reckon it’s in with a strong shout of standing out from the crowd. If you only have £150 to spend on a phone, you’ll struggle to do better.

Like a lot of 2022 budget phones, the Realme C35 design broadly emulates the latest iPhones. The influence is right there in the phone’s flat rim, sharp corners, shiny glass-effect (though decidedly plastic) rear, and clear stepped camera module.

The model I’ve been using comes in a particularly dazzling tone of Glowing Green, which I half expected to glow in the dark. It doesn’t, but it certainly makes itself known in regular lighting. For those looking for something a little more sober and professional-looking, there’s a confusingly named Glowing Black option.

It’s quite a large device in the hand, with a size of 164 x 75 x 8.1mm and a weight of 189g. Combined with those sharp corners, it’s not the most comfortable phone to hold over a protracted period.

Realme has separated the power and volume buttons to the right and left side of the phone respectively. This allows it to place the power button in the perfect position for its secondary function as a fingerprint sensor. While this sensor took a beat to unlock, I didn’t have any issues with reliability.

You also get a 3.5mm headphone jack on the bottom edge of the phone, which isn’t unusual at all in a budget phone. There’s just a single speaker mounted alongside this port. You’ll need to up your spending and acquire a Poco M4 Pro or a Redmi Note 11 if you want stereo sound.

Not that, at this price, you don’t get any kind of official IP waterproof rating but the phone should survive small splashes in the rain.

The Realme C35’s display is a pleasant surprise. On paper, it doesn’t seem like much at all. It’s quite big at 6.6in, but it’s only an IPS LCD rather than a colour-rich OLED.

Crucially, however, it appears to be a good quality IPS LCD. All LCDs are not created equal, and the difference between this and the Moto G22 and Nokia G21 screens is night and day.

Colour accuracy is on point too. With the screen mode set to Gentle mode rather than the richer, less natural Vivid, I recorded a very strong sRGB gamut coverage of 97.4% and a gamut volume of 101.2%. An average Delta E of 1.48 is impressive too.

I recorded a strong maximum brightness of 491 nits with auto-brightness turned off. Realme claims that it can get to 600 nits in high brightness mode (HBM).

The main negative point here is that the Realme C35 screen has a bog standard refresh rate of 60Hz rather than the 90Hz of the Moto and Nokia rivals. But with the limited performance of all these budget phones, you don’t really get the full benefit of that more fluid refresh rate.

The Realme C35 runs on a Unisoc Tiger T616 processor. This is far from the most impressive chip, made using a dated 12 nm production process. It’s backed by either 4- or 6GB of RAM, although in the UK you can only get the lower amount.

For storage, the cheaper model gets you 64GB but you can double that by paying £20 extra which may well be a good investment, although there’s a microSD card slot which you can use to add up to 1TB cards.

In performance terms, however, it’s far better than the Moto G22 with its MediaTek Helio G37, and also has the edge on the Nokia G21 with its Unisoc Tiger T606.

In the CPU-focused Geekbench 5 benchmark test, the Realme C35 scores roughly twice as well as the Moto G22 in single core and around 30% better in multi-core. Those scores are much closer when it came to GPU performance.

Below you can see all the results compared to rivals as well as the cheaper Realme C31, which has the same processor but outputs better GFX results due to its lower 720p screen resolution.

Let’s be straight here though: none of the phones I’m comparing here are strong performers in any sense of the word. If you’re a keen gamer, or you wish to enjoy a completely stutter-free navigation experience, you really need to be spending at least £30 to £50 more for something a little meatier.

That extra might also get you 5G connectivity, which is not something you get here.

If there’s one area where you can guarantee a high level of compromise with cheaper phones it’s photography. However, Realme has equipped the C35 with something respectable.

You don’t get an ultra-wide or (predictably) a telephoto camera here. What you do get is a better-than-expected 50Mp wide camera with an impressive f/1.8 aperture, as well as a 2Mp macro and a 0.3Mp sensor, the latter two of which can be ignored.

That wide sensor appears to be the same one that you’ll find in phones such as the Poco M4 Pro. Hardly a photographic titan, but still a phone that costs considerably more money than the Realme C35.

Shots here look detailed and natural, at least in good lighting. It does tend to struggle with those tricky HDR situations, with the odd overexposed background, while Night mode produces shots that are full of noise. It’s more than adequate as cheap phones go, however.

One thing I will note is that I shot the odd duff shot with the Realme C35 where it completely failed to focus on anything. The very next shot tended to be fine, but you may just miss out on documenting the odd rare or fleeting moment if you’re not attentive.

The 8Mp selfie camera isn’t much cop, blowing out highlights and generally failing to capture natural skin tones. It’ll do a job, but you might not want to rely on it to capture those special family moments.

The Realme C35’s battery performance is solid, but it doesn’t quite stand up to its rivals. You get a 5000mAh cell, which is a decent size, and it’ll get you through a full day of moderate usage with relative ease.

But in a couple of intensive battery tests, it came up short of its rivals. In our standard PCMark Work 3.0 battery test, the Realme C35 score 10 hours and 40 minutes, which is almost two hours short of the Nokia G21. In another test, running a constant looping video, the Realme C35 ran out of juice hours before both the Moto G22 and the Nokia G21.

I’m guessing that the extra pixels of that 1080p display may be taking their toll here. It’s a price that’s definitely worth paying in my view, but the stamina advantages of a 720p display are worth pointing out.

You get a decent 18W charger bundled in, which gets the phone from 0 to 33% in 30 minutes. A full charge will take you just over 2 hours.

Realme’s UI R Edition is a fairly bog-standard custom Android UI sat on top of Android 11. Its notifications and custom apps aren’t too obtrusive, but it’s not as lightweight or clean as the near-stock UIs of the Moto G22 and Nokia G21.

I have few complaints about the UI in day to day running. There are preinstalled apps covering such things as Compass, Sound Recorder, Weather, and Calculator, but such provisions make sense, and they’re stashed away in a discrete Tools folder anyway.

It’s a relatively light customisation effort in all, with Google Feed positioned to the left of the main Home screen, and relatively tasteful menus. The drag-up app tray hasn’t been needlessly tinkered with, either.

Although more expensive Realme phones like the GT 2 Pro now get three years of OS updates and four years of security updates, that doesn’t apply to budget phones like the C35. You’re unlikely to get further than Android 13 here.

Prices start from £149 for a model with 64GB of storage. You can double that storage for a small bump up to £169. You can buy it from the Realme store as well as retailers such as Amazon, Ebuyer and Laptops Direct.

It’s not officially available in the US but you can find a GSM model on Amazon for around the $200 mark.

This means that even the likes of the Redmi Note 11 and the Poco M4 Pro lie in a sub-category above it, with both retailing closer to the £200 mark. Spending the extra money will open up features like AMOLED displays and improved performance.

That doesn’t sound like much of a step up, but at this end of the market it represents a not-inconsiderable 20-30% premium.

Rather, the Realme C35’s direct rivals are the Motorola Moto G22 and the Nokia G21, neither of which are particularly impressive, especially when it comes to the all-important matter of display quality.

In short, there’s an opening for Realme in what is a surprisingly uncompetitive field. Check out more options in our best budget phone chart.

The Realme C35 might be an extremely cheap phone, but it still attempts to make a statement with its bold and angular design. Realme has largely hit the mark on the photographic front too, courtesy a competent 50Mp main camera.

On paper, a 6.6in IPS LCD doesn’t sound too impressive, but it turns out to be a sharp and accurate component. It was a smart decision going with a 60Hz refresh rate too, given that there’s a relatively humble Unisoc Tiger T616 processor driving things along.

A large 5000mAh battery and speedy (for the price) 18W charging complete what proves to be a well-balanced budget package, though as ever at this end of the market, a little more money will go a long way.

If you can’t stretch that little bit further, this is one of the best phones you can buy for under £150.