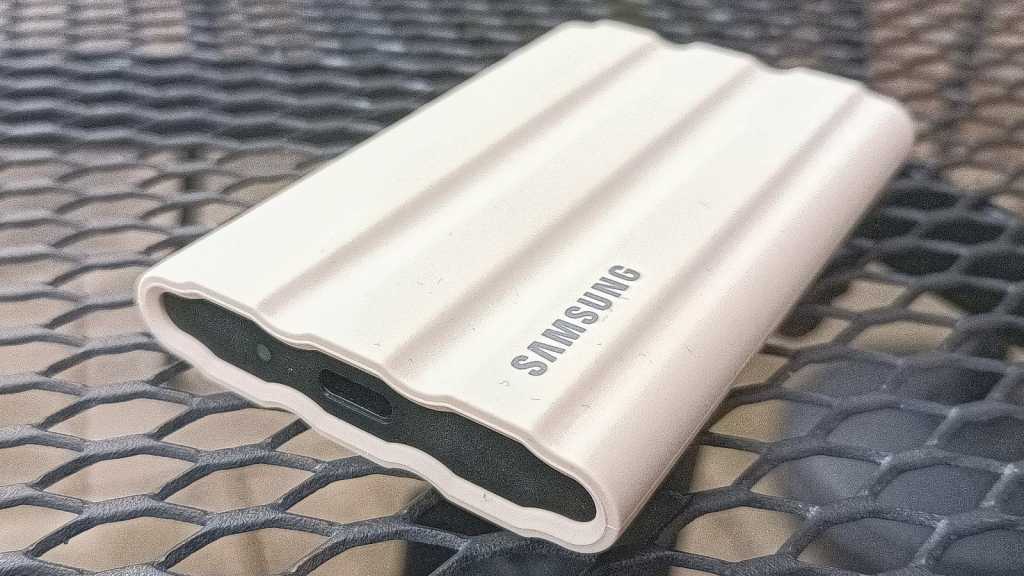 Other than its ability to handle harsher treatment, there seem to be few obvious improvements over the original T7 design. That Samsung made it more robust but kept the same warrant period tells a story.

Back in 2020, Samsung launched the T7 Touch, a biometrically secure external SSD, and a few months later a cheaper no-frills T7 version that proved a very popular choice.

The Samsung T7 Touch offered a 10Gbit USB connection and could read and write files at close to 1,000MB/s, making it ideal for those looking to catch a plane, train or boat with critical files from the office secured on the drive.

Now, Samsung has revamped the T7 to bring us the T7 Shield. With the original T7 still selling, what makes the Shield the T7 that potential customers might want?

Samsung makes the new T7 Shield in three colours, and they sent me the one with the least aesthetically pleasing colour for review. The black and the blue aren’t exciting colours, but the beige one harks back to a bygone era when all computers came in variations on a theme of brown.

It also has a slightly odd, rubberised surface finish profiled like house-siding and not the hard metallic crisp edges of its predecessor.

One side has the Samsung logo stencilled onto the rubber, and on the other, in a tiny font, is the ‘T7 Shield’ branding. The capacity of the drive and all the other standards logos are on a narrow elliptical endplate.

The opposing end has a USB-C port and a tiny LED to show power and activity.

Along with the drive, Samsung includes in the box two USB cables that cover both USB-C and Type-A connections, though they don’t provide a fabric pouch for the drive or the cables – though you likely don’t need one anyway.

If the rubberised finish hasn’t provided a sufficient clue, the subtle change from the original T7 to the T7 Shield is that the enclosure has better protection for the SSD electronics inside, allowing the owner to exercise much less restraint when throwing it to his colleague on the other side of the office.

The T7 Shield is, like many smartphones, IP65 rated for dust and water resistance and designed to withstand a 3-meter drop. The original T7 had a 2m drop rating, so the T7 Shield is 50% better at resisting clumsy people.

For those confused by IP ratings, IP65 isn’t waterproof, but Samsung claims that the drive can handle some water, just not submersion. But, it comes with the same three-year warranty as the T7 does.

The only item of note on the review drive was that the USB-C cable came out rather too easily, leading to several head-scratching moments when I wondered why the system didn’t see the drive.

USB has come to a strange point in its existence where it’s stuck in a state of limbo between what was USB 3.0 and the forthcoming USB 4.0 standard.

What doesn’t help is that the USB implementers Forum (USB-IF) likes to rebrand known USB standards into new ones that easily confuse the buying public. USB 3.0 was renamed USB 3.1 Gen 1, and then USB 3.2 Gen 1.

Until USB 4.0 truly arrives, the best USB connection technology is USB 3.2 Gen 2×2, a connection that offers the same 20Gbps bandwidth available through Thunderbolt 3 or 4 drives.

Sadly, the T7 Shield only offers USB 3.2 Gen 2, not Gen 2×2. That’s the same 10 Gbps as the T7 before it, and therefore the speeds on offer aren’t any faster. That’s unfortunate, but given how few computers have a USB port that is Gen 2×2 capable, it’s also understandable.

In one respect, the T7 Shield provides fewer options than the prior T7 in that this drive is only available in 1- and 2TB capacities. The 500GB model isn’t an option in this design, and no 4TB drive was added to balance its removal.

With the number of external SSDs offering 4TB and some 8TB drives on the horizon, why larger than 2TB isn’t an option is a mystery and for others, 500GB may be enough.

One other feature Samsung retained that I liked is that the T7 Shield, like the previous T7, has AES 256-bit hardware encryption, allowing the contents to be secured.

The only caveats to using this option are that it assumes the systems the drive will be connected to have the software needed to unlock the drive and that the password is never forgotten.

Once the contents are hardware encrypted there are no back-door means to access it should the password not be available, because if there was, it wouldn’t really be secure.

Samsung provides a software utility, the PSSD, or Samsung Portable SSD Setup, that can activate hardware encryption and maintain the drive with firmware updates.

A utility to sync the contents with PC folders isn’t included, so those wanting that beneficial functionality will need to source it elsewhere.

Given that the SSD technology at the heart of the T7 Shield appears unchanged from that in the T7, I wasn’t expecting anything special while running it through the usual collection of benchmark tests.

That prediction appeared justified, as the numbers I encountered with the 1TB review drive were in the performance envelope of most external SSDs that use USB 3.2 Gen 2 standard.

What’s interesting about the results is that while the default settings for many of the benchmarks presented numbers at the very upper limit of what a 10Gbps USB port can move, those with ‘real world’ options revealed a less impressive level of performance.

All tests that graph performance showed that while read speed was reasonably constant, write speed spiked repeatedly over a relatively short period. This activity indicates that the write cache is relatively small on the SSD, and when it is saturated, performance drops to around 600MB/s before jumping back up.

Sourcing the same hardware from Amazon US, the T7 Shield is the same price as Samsung quotes.

UK customers don’t have an option to buy directly from Samsung, and the 1TB and 2TB drives are typically priced at £134.99 and £247.99 from retailers such as Amazon, Box, Ebuyer and Laptops Direct.

Compared to the Crucial X6 and X8, the T7 Shield is expensive, and it’s closer in cost to the Kingston XS2000, one of the few drives that can use a USB 3.2 Gen 2×2 port to deliver closer to 2,000Mbps transfers.

Check our chart of the best portable hard drives and SSDs for more options.

To be blunt, after two years of development, I expected more.

Though I can’t entirely blame Samsung as it’s where USB technology currently resides, that’s a part of the issue here. If Samsung wanted to offer a premium-priced model adding Gen 2×2 connectivity and performance, this product might have made more sense.

Instead, what we’ve ended up with is a marginally more robust T7 that costs up to 17% more, depending on the capacity, with much the same performance and internal features.

Similar read and write performance can be experienced with the Crucial X8 for about 70% of the cost for the 1TB capacity, and the X6 is even cheaper. Adding insult to injury, the X6 has a 4TB capacity option for those that need more than the largest T7 Shield drives can hold.

The conclusion must be that if we do ever see a significant upgrade to the T7 series, we may be forced to wait for USB 4.0 to become commonplace, however long that transition might take.

Buying the T7 Shield has to be a purchase primarily on the added durability compared to the regular model.