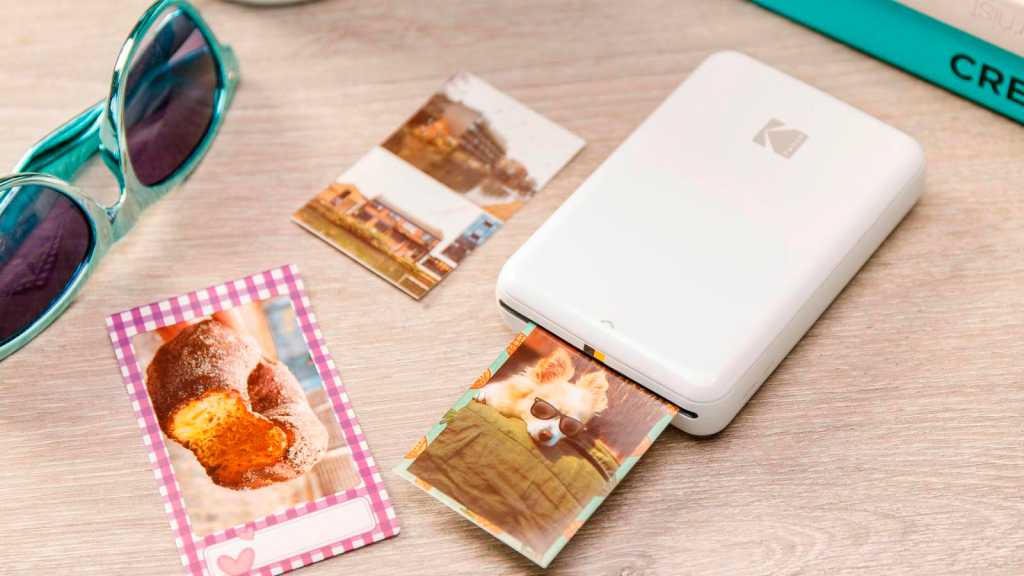 The Kodak Step Printer is a reliable, affordable instant photo printer. It doesn’t do anything its rivals don’t, but it costs less and has few flaws to undermine its appeal.

There are plenty of other similar Zink printers out there, and the Kodak Step doesn’t do anything revolutionary that the rest don’t. But it’s cheap, compact, and gives you plenty of easy editing options – making this one of the better options in a crowded field.

Kodak has kept things simple with the Step printer.

This is a compact plastic brick, small enough to slip into a pocket or handbag. Available in white, black, blue, or pink, there are few flourishes to the design outside of your choice of colour.

The only thing that really stands out is a small black-and-yellow stripe on either end. This is just a sticker though – which on the upside means you can peel it off if you’re not a fan, but unfortunately means it’s also likely to peel itself off with sufficient wear and tear.

There are two LEDs for power and charging, one button to turn the printer off and on, and that’s honestly about it. When you want to load paper to print, you simply slide the back of the body off and load in the prints – it’s simple, quick, and pretty difficult to get wrong.

Almost everything you do with the Kodak Step is controlled through the free app, available on iOS or Android. You can set up an account with Kodak, but this is optional – everything works fine without one.

The first step is pairing the printer to the app, but this is easy enough. They connect over Bluetooth, and in less than a minute I had the app connected to the printer and ready to go.

Images can be selected from your device’s gallery, or you can connect the app to your Facebook, Instagram, or Google photo libraries for more options.

Once you pick an image, there’s a wealth of options. You can just print it as it, either in landscape or portrait format, with the option to either print the full image with a border or crop it in if it’s not in the exact aspect ratio of the Zink prints (most of your photos won’t be).

But you can also edit images. This can be as simple as applying an Instagram-style filter, or you can get more complex and tweak brightness, hue, or colour temperature, or add on colourful frames, stickers, text, or drawings. You can also create collages with multiple photos in one print – but bear in mind that due to the size of the paper, each image may end up pretty tiny.

I’ve mostly been impressed with the Kodak Step Prints app, which is well laid out – and far simpler to use than its strangely laborious step-by-step tutorial process would suggest.

That said, it’s not perfect. For one there are some odd choices, like the fact that the most detailed set of image hue sliders appear only on the ‘Print preview’ page of the app – and not, as you’d expect, in the ‘Edit photo’ section.

There are bugs to sort out too. The app has a tendency to freeze at times, especially when loading a photo to edit. The ‘Print preview’ brightness slider also seems to be entirely broken, raising brightness drastically if you so much as tap on the bar, with no option to lower it below the image’s starting point.

The Kodak Step prints onto ink-free Zink prints – a popular format for instant printers and cameras in recent years.

The key benefits to Zink are that the prints themselves are cheap and quick to process, the printer doesn’t need ink cartridges, and that each print is actually sticky-backed – so you can peel off the back layer and turn any photo print into a sticker.

There are two real downsides. One is size – at 2×3”, Zink prints are tiny. That’s part of why the printer itself is so portable of course, so it’s not all bad. But still, these are dinky, and too small to really display anywhere – they’re better suited to making collages or tucking into a wallet.

The bigger concern is quality. This isn’t bad by Zink standards, preserving a fair amount of detail from images and printing at a respectable colour range. Still, a little is lost from every photo, and there’s none of the charm or style you’ll find on an instant film printer like the Instax Mini Link.

On a full charge, the Kodak Step can apparently print up to 25 prints – I didn’t have that many to test with so can’t confirm, but it did happily make it through a full pack of Zink paper, with lots of standby time, without complaint.

The one small disappointment is that when it comes to charging, you have to use a Micro-USB cable. This is getting to be a pretty old charging standard now, and it’s plausible that you won’t really own or use any other Micro-USB products at this point.

Kodak does include a cable for you to plug into any existing USB charger, but still – it’s a bit annoying that this couldn’t use the more recent and universal USB-C standard.

The Step Printer costs £69.99/$99.99, available from Amazon, Walmart, and more, making it one of the more affordable Zink printers around.

Zink paper is relatively affordable too, though still costs around 50p/50c per sheet – less than Instax prints, but enough that you won’t want to burn through prints with abandon.

Make sure to check out our guide to the best instant printers to see how the competition stack up, or the best instant cameras if you want to take photos rather than just print them (many do both).

The Kodak Step Printer is hardly a reinvention of the instant printer, but it’s a good example of the form.

It’s small, compact, and feels durable, with decent battery life and an easy print process. The associated app is simple too, with quick pairing and a range of options to alter your images – though I did encounter a couple of bugs and issues along the way.

Best of all, at the time of writing this runs a little cheaper than most of its rivals while doing fundamentally the same thing – enough to make it an easy option to recommend.