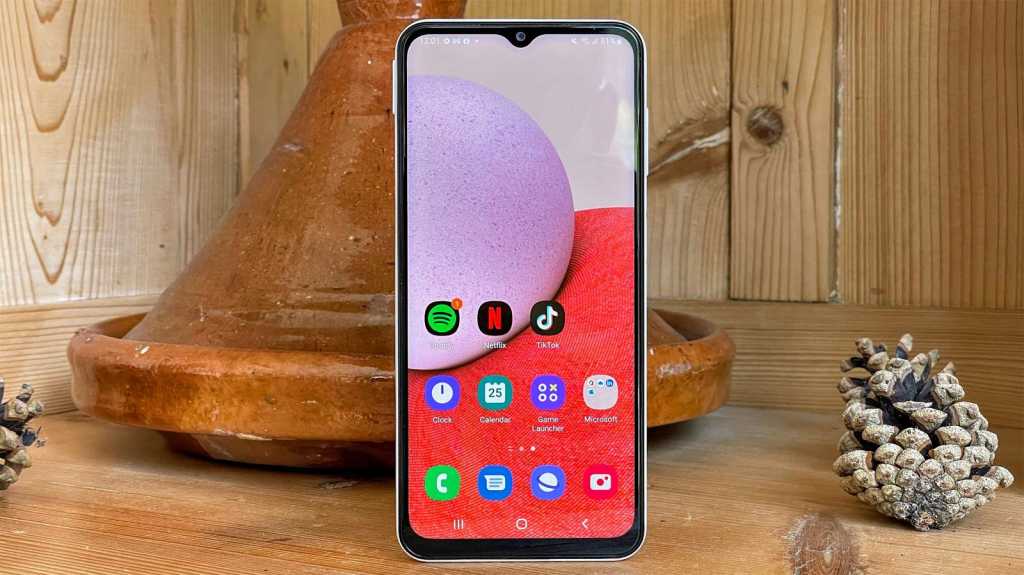 If you want a Samsung phone on a budget, the A13 is certainly affordable, but you’ll need to live with sluggish performance.

While it’s just an opinion, I think it’s a good-looking phone with its neat triple-camera stack on the rear (which doesn’t stick out) and a glossy plastic finish that’s available in black, white and blue. It might be too plain for some tastes, but the minimalist design will appeal to others.

It has a large, good quality screen, a big-capacity battery and expandable storage – all for a tempting price. But is it worth buying? Let’s dig in and find out.

One quick note: in the US and some other markets Samsung also sells the A13 5G. Note that this phone varies by more than its networking though, with a different display, chipset, camera, and more. This review is specifically for the 4G version, officially simply called the Galaxy A13.

As you should expect from a budget phone, construction is mainly plastic. It’s great-feeling and great-looking plastic, mind, but fingerprints are the enemy of its smooth, glossy finish. You don’t get a case in the box, so if you do decide to proceed without one, you’ll have to live with those fingerprints or be constantly cleaning them off.

Plastic phones are generally lighter than metal ones, but at almost 200g, the Galaxy A13 is no featherweight. And measuring 165 x 76 x 8.8mm, it’s at the larger end of the smartphone scale.

On the bottom edge is the surprise inclusion of a headphone socket: the A13 is one of few phones these days to feature one. It’s handy if you have a favourite pair of cans that you still love to use with your phone, but you can use Bluetooth earphones if you prefer.

Any headphones will be an improvement on the sound quality of the mono speaker which is entirely lacking in bass and makes music pretty unpleasant to listen to, though it’s ok for the odd video.

Between the speaker and minijack socket is a USB-C port for charging. The power button doubles as a fingerprint sensor and works well enough, but you can use face unlock if you’re happy to live with the fact it’s not nearly as secure.

Whichever colour you pick, the front of the phone is black with a reasonably chunky bezel surrounding the screen. The screen is interrupted only by a small teardrop which provides space for the front-facing camera.

On the left you’ll find the SIM tray which extends about mid-way into the phone and provides space for two micro-SIMs and a microSD card.

Protected by Gorilla Glass 5, the Galaxy A13’s screen is pretty good for the price. Unfortunately it isn’t an AMOLED display as you’ll find on most Samsung phones and it isn’t as good as the few budget phones that are blessed with OLED screens, but those models tend to make sacrifices elsewhere.

Though viewing angles aren’t amazing – brightness drops off the more you angle it away from you and colours fade – when looking square on, the Galaxy A13’s screen is perfectly acceptable. It’s nice and bright, colours are fairly true to life and it can show a good range of them. The default wallpaper shows these facets off to good effect and the resolution is just as good as on some phones costing four times as much.

It’s no surprise that it has a bog-standard 60Hz refresh rate, though higher refresh rates are increasingly common at this price – so you may find some other rival budget phones are a little smoother to use.

The Galaxy A13 uses Samsung’s own Exynos 850 processor, and the bad news is that the Exynos 850 is simply very slow.

In Geekbench 5’s multi-core test it scored a paltry 585. That’s such a low score we had to run the test again to make sure something hadn’t gone wrong. But no, it proved correct, as did the single-digit framerates in most of the GFXbench tests.

Benchmarks are one thing, but in the real world, you’ll notice this lack of performance all too often. Apps take longer to load than you’d expect, Android runs a little jerkily, and scrolling through social media feeds isn’t a particularly smooth experience.

Gaming, of course, is out of the question. Unless you exclusively play Candy Crush or other similar games which are undemanding on the processor, you’ll find the A13 just isn’t up to the task.

My review unit comes with 4GB of RAM and 64GB of storage, though in other markets it may come with 3GB or 6GB RAM, and 32GB or 128GB storage. You can expand upon the internal storage by slotting in a microSD card up to 1TB in capacity. Most phones force you to choose between extra storage or a second SIM, but the A13 doesn’t: you can have both.

Other hardware includes NFC, Bluetooth 5 and Wi-Fi 5, along with 4G. There’s no support for the more modern 5G networking, though that’s still pretty typical for a phone this cheap.

There’s better news about battery life, which isn’t bad at all. In PCMark’s battery benchmark, the A13’s 5000mAh battery managed a credible 12 hours and 20 minutes. And that was borne out in real-world use where it was easily able to last a day with plenty of use: browsing the web, taking photos, sending emails and playing the odd bit of 2048.

As no charger is supplied in the box, I used a RavPower 61W USB-C charger that I had to hand which provided way more than the 15W the A13 can take. After 30 minutes, it charged from empty to 25%. Despite Samsung calling this ‘fast charging’, a full charge still took over two hours.

Not including a charger is better for the environment and there’s a good chance you’ll already have one you can use, but it’s a shame the A13 isn’t cheaper because of this.

Aside from the fact it’s an inexpensive Samsung phone, the other thing that might have attracted you to the Galaxy A13 is the cameras. There are four on the rear and one 8Mp on the front.

Don’t be persuaded by numbers, though, as two of rear cameras are mainly there for show. As with other budget phones, Samsung has thrown in a 2Mp macro lens which you’ll probably never use, though it can take some interesting photos, and a 2Mp depth sensor which can’t take photos at all: it’s there to assist the portrait mode on the main camera.

The ultrawide lens isn’t great either, with a low 5Mp resolution and resulting low-detail, grainy images in anything other than the best light.

The main camera, though, is very good for a budget phone. It’s capable of taking sharp, detailed photos of people, pets, landscapes and just about anything. It falls down in low light and doesn’t have optical stabilisation, which means it’s not great for fast-moving kids or pets, but during the day you’ll be pleased with the results… mostly.

Selfies aren’t brilliant, with a lack of sharp detail. Then again, a smoothing of the wrinkles and imperfections might not be the worst thing.

Video is limited to Full HD at 30 frames per second. It’s ok, but you wouldn’t want to use the Galaxy A13 to capture your child’s birthday party or anything important. There’s no stabilisation, so it can be quite shaky and unwatchable if you don’t keep the phone really still.

Arriving in the box with Android 12 and Samsung’s OneUI 4.1, software is an area you can’t complain about. It isn’t quite stock Android, but there’s a lot to like about OneUI’s friendly, clean interface.

By default you get home screens (a little confusing for first-time OneUI users) and Samsung’s full-screen shortcuts panel when you swipe down from the top twice.

During setup,  you’re asked if you want to install a few popular apps from a list, including Twitter and TikTok, but you can decline if you like. There are a few preinstalled apps: Spotify, Netflix, LinkedIn, and some Microsoft stuff, but these can be removed if you don’t want them.

The A13 doesn’t benefit from Samsung’s extended updates that provide up to four subsequent Android versions, but it is expected to receive two Android version updates – to Android 13 and then 14 – and a full four years of security patches.

In the UK it was discounted to £149 at the time of review. It’s also available from other retailers including Amazon, Argos, John Lewis and others.

For more places to buy, see our separate guide to the best Galaxy A13 deals.

The Galaxy A13 should be a slam dunk for Samsung. Anyone looking for a budget phone will see the brand, the low price and think it’s a safe bet. But with such poor performance compared to certain rivals, it isn’t.

As long as you’re happy to accept that this isn’t going to feel like a fast device and you’re tempted by the good main camera and Samsung OneUI, then at the discounted prices you’ll find from retailers, it’s just about worth buying.

But for the Galaxy A13’s RRP, you can get far better performance as well as luxuries such as a 90Hz AMOLED screen, making it difficult to recommend it over the aforementioned Xiaomi Redmi Note 11 and Moto G31. There are trade-offs to make with any cheap phone, so be sure to read our reviews and our roundup of the best budget phones before making your final choice.