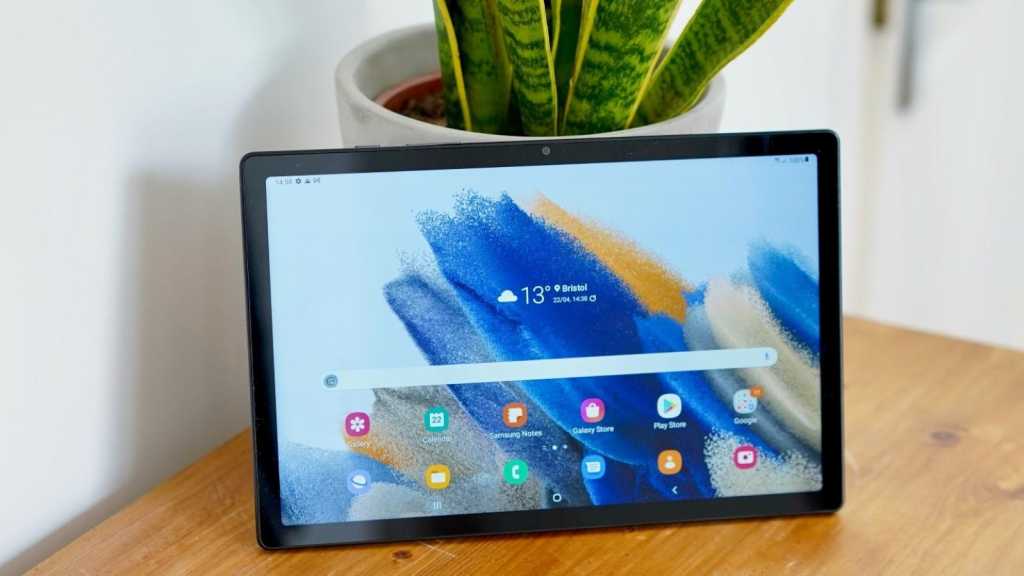 Budget tablets don’t come any better built than the Samsung Galaxy Tab A8. Throw in a strong set of speakers and decent battery life, and you’re halfway to a top-quality affordable media player. A poor screen and slow charging hold it back from top marks, but it’s a good value option nonetheless.

Samsung is pretty much the undisputed king of an admittedly rather patchy Android tablet scene right now, with a range of solid slates available for all budgets.

At the opposite end of the scale to the ludicrously OTT Samsung Galaxy Tab S8 Ultra, there’s the Samsung Galaxy Tab A8. Featuring a classy design, one or two stand-out bells and whistles, and an immensely appealing starting price of £219/US$229.

It’s a tempting option if your bank balance won’t stretch to anything like iPad or Samsung Galaxy Tab S8 territory. Our review sample was kindly provided by Box.

By far the most impressive thing about the Samsung Galaxy Tab A8 is how well it’s built. If you were to have handed this tablet to me in a powered down state, with no accompanying information, I would have assumed it was a mid-range tablet selling for at least double the price.

This is a full-sized tablet with a flat-edged yet slender 6.9mm body and relatively minimal bezels around the screen. It’s about as tall as an iPad in portrait view, but nowhere near as wide and a weight of 508g is about par for the course for a 10in slate such as this.

My sample model comes in a very professional-looking Graphite (think dark metallic grey), but it also comes in Silver and Pink Gold.

It’s not just the way the Samsung Galaxy Tab A8 looks that’s impressive though. It feels reassuringly solid in the hand, with a body that’s primarily made of metal.

There’s a plastic strip along the edge that houses the power and volume keys, as well as presumably enabling network communication (there are both Wi-Fi and LTE models available).

Talking of buttons, one of the biggest omissions here is a fingerprint reader. You’ll have to rely on a clunky passcode entry system or an insecure and flaky facial recognition system if you want to lock your tablet. Neither is particularly great.

It’s sufficiently sharp for a budget tablet this size, but in going with a TFT LCD panel, it’s not particularly vibrant or colour-accurate. IPS LCD panels produce better colours and viewing angles.

Sure enough, a gamut coverage of 82% sRGB, 60% Adobe RGB, and 63% DCI P3 really aren’t great and an average Delta E of 4.39 is way off the very best. Just to make that last point clear, the closer to 1 the better, and even a semi-decent display will get to around 2.

A peak brightness of 327 nits is ok but nothing special. You certainly won’t enjoy using the tablet outdoors in even relatively bright conditions.

Elsewhere, a basic 60Hz refresh rate means that it’s not especially fluid either. But then, Apple is still sticking with 60Hz for all of its non-Pro iPads, so far from expected in such a cheap tablet.

It’s the quality of that picture output that’s the real weak point here, especially given that Samsung is really positioning this tablet as an affordable media player. Indeed, it’s gone above and beyond in equipping the Tab A8 with a quad speaker set-up and Dolby Atmos support.

Sure enough, audio is loud and clear, whether watching a film on the preinstalled Netflix app or TV and podcast content on the similarly preinstalled Samsung Free app.

The Samsung Galaxy Tab A8 runs on a Unisoc Tiger T618 processor, together with either 3GB or 4GB RAM. This isn’t the most familiar chip on the market and you might expect Samsung to use one of its own Exynos chips but it runs reasonably well for a budget tablet.

Check the scores below compared to rivals as well as the more expensive Xiaomi Pad 5 to highlight the extra performance available if you did spend more.

That’s not to say that things are silky smooth in general navigation, with the occasional pause or stutter when moving around between apps and even home screens and menus. It’s far from unusable, but I was never in any doubt that I was using a cheap tablet so some patience is needed at times.

When it comes to more intensive tasks like games, it’ll run Slay the Spire just fine, except for a telltale lengthy pause just before your character dies. Indeed, the Samsung Galaxy Tab A8 is a better way to play such 2D fare (as well as the likes of Kingdom Rush) than any £1,000 flagship phone.

Don’t expect the tablet to perform equally well with 3D games, however. I was unable to run my usual Genshin Impact stress test, as there simply wasn’t enough storage space left over from an initial 32GB once Samsung and Google had taken their considerable system slice.

There’s a strong case for going the 64GB route, though there is the potential for up to 1TB of microSD expansion. In the US, you can also buy the Tab A8 in a 128GB capacity if you think you need it.

I was able to run the well-optimised League of Legends Wild Rift, which ran adequately on low settings. Old warhorse PUBG Mobile, meanwhile, loaded up with HD graphics (the third lowest of six) and a High frame rate, which isn’t bad. The performance in-game wasn’t too great, though, especially with those fuzzy textures blown up to 10.5in, but it was playable.

The camera doesn’t tend to be the focus of any tablet, and nor should it ever be. That goes doubly for cheap tablets. So, I won’t waste too much time talking about the Samsung Galaxy Tab A8’s camera offering, except to say that it isn’t very good at all.

You’re getting just a single 8Mp rear camera here, with no flash, and with no ultra-wide or telephoto back-ups, of course. That solitary sensor takes shots that are full of noise, lacking depth and dynamic range and often woefully overexposed.

The 5Mp selfie camera proved borderline unusable on the morning of my test shots, seeming completely unable to handle the moderately bright conditions of the day. You can see the hideously blown-out results for yourself in the gallery. Still, it’ll serve its intended function as a Zoom camera perfectly adequately.

Nine times out of ten, if you’re looking to take shots with any tablet, I’d suggest you reassess your life choices. But if you insist on pointing and shooting with your 10in device, then know that even a super-cheap smartphone will turn out better results than the Galaxy Tab A8.

The Samsung Galaxy Tab A8 packs in a decent-sized 7040mAh battery, which will last you days of light usage.

Step things up with lots of intense tasks and that figure will drop quite dramatically. In our standard PCMark World 3.0 battery life test, the Galaxy Tab A8 scored a middling 8 hours 49 minutes.

While it supports 15W charging, Samsung has only bundled its budget tablet with a 7.8W charger in the box. That’s more than it does with even its most expensive smartphone, but given the size of that battery, it takes an absolute age to get to full.

Samsung’s software seems to be a real love it or hate it affair. It’s not my particular cup of tea, thanks to its overly fussy nature, somewhat gauche menus, sluggish animations and abundance of home-brewed and third-party apps. But I’m well aware plenty of people view it as the quintessential take on Android, even more so than stock Android.

Whatever your view, it can’t be denied that One UI has been reasonably well optimised for tablets. Using two apps simultaneously in split-screen works well in particular, despite the limited hardware underlying it all.

The new Screen recorder function, accessed through the drag-down shortcut settings menu, lets you record whatever’s on your display, together with commentary if you so wish. This has potential benefits for the Galaxy Tab A8 as a teaching and learning tool.

There’s no S Pen compatibility here, however, unlike with the Samsung Galaxy Tab S6 Lite. I understand that budgets were tight, but it feels like a missed opportunity given the Galaxy Tab A8’s likely audience.

As mentioned earlier, the US also has a 128GB model should you want that much storage. Here’s the price breakdown (RRPs) for all models via the Samsung store:

In the States, you can buy it from Samsung as well as Amazon, BestBuy and even Dell.

In terms of an alternative, the Nokia T20 will offer you an even cheaper full-sized Android experience from £180, and with cleaner software and a superior IPS screen to boot. Its performance isn’t very good at all, however.

The Samsung Galaxy Tab A8 is another solid budget effort from the king of Android tablets. Its premium design and loud, clear sound are unusually accomplished for a very affordable price – if 32GB is enough storage for you that is.

However, the tablet’s TFT display is disappointingly flat and washed out, compromising its potential as an affordable media player. The lack of reliable biometric authentication is another downer but not essential and the Tab A8 has a surprisingly excellent sound system.

Performance, while far from spectacular, is perfectly adequate for a tablet of this price, and battery life is very good. It’ll take you an age to get back up to 100% from empty with the bundled charger, but that’s not such a pressing issue in the tablet world.