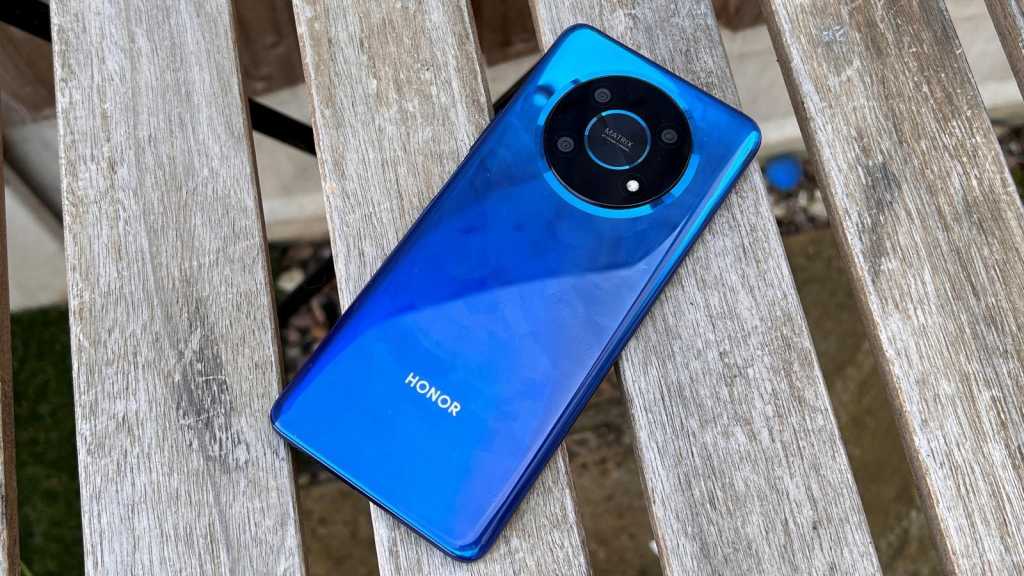 Honor’s mid-range 5G handset offers plenty to be excited about with longer battery life than rivals but had camera issues while lacking an AMOLED panel – all at a higher price than key rivals making it hard to recommend.

That’s largely down to its whopping 6.81in screen, but it’s also pretty tall, too – even taller than the iPhone 13 Pro Max I normally use. While it’s not the brightest screen around thanks to its LCD tech, it’s still going to draw a crowd thanks to its monolithic nature and high refresh rate.

The best part of the Honor Magic 4 Lite 5G, though, might be in its performance, with games like Call of Duty: Mobile really taking advantage of the Snapdragon 695 5G chipset and pushing the panel to its 120Hz limits.

Sadly, though, it’s not all good news. The phone’s cameras, despite decent specs and megapixel counts, are inconsistent at best, with daytime shots looking washed out and dark mode actually being clearer in most instances, while a single speaker at the bottom of the device makes it feel less of a multimedia powerhouse than the screen would have you believe.

One note: the Magic 4 Lite 5G has also released elsewhere as the Honor X9 5G. My review sample is technically an X9 5G, but from the design to the specs it is identical to the Magic 4 Lite 5G, which is the name the phone is sold under in the UK and Europe.

The Honor Magic 4 Lite 5G comes in Titanium Silver, Midnight Black, or, as per my review unit, Ocean Blue. As I keep mentioning, the front of the device is dominated by that huge LCD panel, with thin bezels all around but a slightly thicker chin at the bottom.

There’s a hole-punch camera situated centrally at the top of the display with a 16MP sensor inside. For such a large phone, it’s impressive to find it’s just 8mm thick and 189g.

On the right-hand side, you’ll find a fingerprint scanner for unlocking embedded in the sleep/wake button, as well as a volume rocker. That’s it for physical controls, though, so don’t expect to summon Google Assistant with a hardware button.

At the bottom, you’ll find a USB-C charging port, a SIM tray, and a speaker grille, while the top has an earpiece that’s strictly for hearing calls. There’s also no headphone jack here.

Flip the phone over, though, and just like the Honor Magic 4 Pro, there’s a hefty array of sensors laid out in a circular outer ring. It’s a conversation starter for sure, and while it was a little jarring during the initial unboxing I came to appreciate Honor trying something different.

Speaking of unboxing, you’ll also find a slimline clear case inside, too. That’s handy because the Honor Magic 4 Lite 5G collects fingerprints like nobody’s business. However, the phone doesn’t come with any kind of waterproof rating.

While I’ve been critical of LCD panels in the past because they lack the vibrancy and colour detail of their OLED cousins, I have to say I may have prejudged the Honor Magic 4 Lite too soon.

That’s because while it is an LCD that tops out at 1080p (with around 385 pixels per inch), it does offer support a 120Hz refresh rate.

That makes a big difference when gaming (which I’ll get to shortly), but also simply navigating the OS and scrolling through social media feeds, YouTube playlists and more.

Still, viewing angles aren’t great. Colours can appear washed out, blacks are more grey, and the screen is pretty reflective in direct sunlight. Watching YouTube and the like indoors is great though.

However, you’ll likely want to use headphones due to the basic speaker setup. Most “all-display” phones use an earpiece that doubles as a speaker for stereo output when you’re watching a movie in landscape, for example. The Magic 4 Lite 5G doesn’t, instead putting all sound through the mono speaker at the bottom of the phone.

That makes audio feel messy as well as unbalanced, and certainly means you’re unlikely to reach for the phone as a portable music player when you’ve got company.

All in all, the sheer size of the display earns some plaudits, but it’ll pale in comparison to something like the Poco X4 Pro 5G which has a more modern AMOLED display and retains 5G connectivity, as does the OnePlus Nord CE 2 5G.

The Snapdragon 695 5G inside the Honor Magic 4 Lite 5G, plus the Adreno 619 GPU, mean it punches above its weight – and, in a lot of ways, its pricing category. The same is true of the Poco X4 Pro 5G.

The phone comes with 6- or 8GB of RAM and I’ve tested the latter. The result is plenty of horsepower for racking up the wins in Call of Duty: Mobile, PUBG: Mobile, or the likes of League of Legends: Wild Rift. While games don’t exactly pop on the LCD screen like they do on AMOLED, they do give that 120Hz refresh rate a workout.

It’s not going to give flagships a run for their money, but it’ll smash tasks you throw at it, letting you move between work and play with no discernible slow down – even with a fair number of apps stacked up in multitasking. That’s aided by that high refresh rate, though, making scrolling feel silky smooth.

Running through our usual suite of performance benchmarks, the Magic 4 Lite 5G outperforms the likes of the £199/€199 Xiaomi Redmi Note 11 and Realme 8 as you would expect, but is a little behind the Poco and Nord.

Finally, a note on storage. The Magic 4 Lite 5G comes packing 128GB of internal storage, but there’s no expansion slot for an SD card.

The Honor Magic 4 Lite 5G offers a quartet of cameras, with a 2MP depth camera and 2MP Macro lens flanking the main 48MP snapper on the back, and a 16MP selfie camera.

Photos are clear, and offer plenty of detail, but it appears something may be up with the ISP because we found we constantly needed to turn down the exposure. As you can see with the pictures of kids’ toys and Duplo blocks, everything is just overexposed.

That then has the knock-on effect of lacking accuracy when it comes to colours. The basketball hoop on the side of the childrens’ slide that you see in the photos is actually red, but the Honor shows it as being closer to pink.

And yet, in dark mode, where you’d expect additional light, the Magic 4 Lite 5G performs much better. In the shot of the baseball cap, details are clear, as is the model sitting on a desk in the evening. Thankfully, exposure can be altered, but you may need to spend some time to really get the balance right.

That macro lens, sadly, isn’t anything to write home about – as you can see from the dandelion shot. This is pretty much the case for any phone with a 2Mp macro lens.

The front selfie camera is solid, although it automatically adds the ‘Beauty’ filter – don’t worry, Honor, I wasn’t offended. This softens the image, but turning it off made things look plenty clear enough if a little overexposed again.

If you’re looking to record video, though, that exposure issue is exacerbated somewhat, often switching things up in inconsistent lighting, going from one extreme to another. It’s also shaky with no optical image stabilisation (OIS) and capped at 1080p 30fps.

Despite the power and the huge screen, perhaps the biggest surprise with the Magic 4 Lite 5G is battery life. I ran our usual test, with the PCMark Battery Work 3.0 and hit a genuinely impressive 15 hours and one minute.

That’s more than the Poco M4 by about four hours, and most rivals, too. This should get the vast majority of users through a normal day and light users may well get two.

Even better, the Honor SuperCharge adapter included in the box runs at 66W. That’s enough to charge the 4800mAh battery quickly. Users can expect 44% in just 15 minutes, or 77% after half an hour.

This is where things get a little tricky. The Honor Magic 4 Lite 5G is actually running Android 11 with Honor’s own Magic UI running on top of it.

That means that technically, the new phone is already running an old OS. Honor has committed to rolling out Android 12, but that could be a way off – although Magic UI has already hit version 6.0 for Android 12 so it could be sooner.

Magic UI 4.2, the version the Magic 4 Lite 5G ships with, is no slouch though. It looks good, features intuitive gestures like calling Google Assistant by swiping from the bottom, and packs a lot less bloat than other mid-range handsets.

Interestingly, though, I couldn’t get the Honor Magic 4 Lite 5G to offer the multi-window multitasking that Honor allows on many of its similar spec devices. That’s a shame because the huge display feels ripe for opening multiple windows at once.

I also had to get used to the bizarre wallpaper picker that appears when swiping anywhere on the lock screen. After years of being able to swipe up from the bottom of the screen to go home, it felt strange being sent to try new wallpapers when trying that here – but it’s easy to adjust to dragging up from anywhere on the screen as opposed to the very bottom.

As mentioned earlier, the phone is also called the Honor X9 5G in Malaysia where it costs RM1,299 and gets you the 8+128GB version tested here.

The spanner in the works for this handset comes in the form of the Xiaomi Poco X4 Pro 5G, which as mentioned earlier has similar specs and features but a better AMOLED display. It’s also cheaper at £259/€299. You might also consider the OnePlus Nord CE 2 5G at £299/€349, which also offers AMOLED.

Check out our ranking of the  best mid-range phones to see more options.

The Honor Magic 4 Lite 5G/X9 5G is an impressive 5G device when it comes to performance, but its media potential suffers due to dismal speakers and bizarrely inconsistent camera results.

And yet, there’s so much to like. The battery life is good, the screen is huge, and it doesn’t sacrifice power to chase that 5G dragon.

However, those aforementioned rivals from the likes of Xiaomi and OnePlus are cheaper and have superior AMOLED screens so if they are available where you live then they make for better buys.