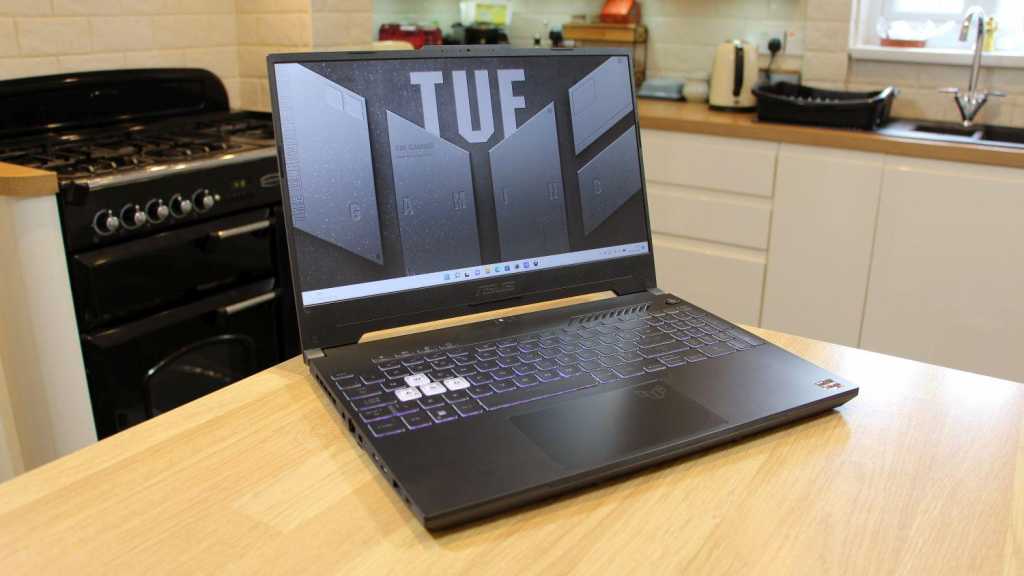 The Asus TUF Gaming A15 deploys a rock-solid Nvidia GPU, impressive AMD processor and a high-quality screen to deliver a great mainstream gaming experience at a decent price – even if connectivity, trackpad and speakers are all mediocre.

The Asus TUF Gaming A15 has been around for several years, but Asus has never been complacent with its most affordable gaming notebook – the firm has kept refining the design and beefing up the internals.

This 2022 model has received faster components and more ambitious display options inside a case that’s lighter than the older machine.

There’s plenty of competition at this end of the market, though, so we’ve got to find out if 2022’s Asus TUF Gaming A15 can stand up against rivals like the Acer Nitro 5.

You’ll find most of the TUF’s physical connectivity on the left-hand side. The TUF has two USB 3.2 Gen 1 Type-C ports, with one handling DisplayPort, and the left edge also houses a full-size USB 3.2 Gen 1 port, an HDMI output and the audio and Ethernet jacks.

That’s fine everyday connectivity, but faster USB ports would be better. You get dual-band Wi-Fi 6 and Bluetooth on the inside, and the TUF has a basic 720p webcam. Unsurprisingly, there’s no fingerprint or card reader.

The A15’s second full-size USB port sits halfway down the right-hand side, which is awkward if you’re right-handed and using a mouse.

The TUF has middling build quality – there’s flex in the aluminium lid and plastic chassis, even if it’ll survive conventional use. At least the TUF doesn’t take up much room: its 2.2kg weight impresses for a mainstream notebook and its 25mm-thick body isn’t chunky.

Indeed, the TUF is a half-kilo lighter than the Acer, although the Nitro has faster USB ports. Elsewhere, there’s little to choose between these two machines.

The Asus TUF Gaming A15’s 15.6in body means that Asus has room for a numberpad, and the keyboard has fast, crisp, and quiet buttons. They’re good enough for mainstream gaming, and they’re crisper than the Nitro’s soft keys.

That’s not to say that the A15’s keyboard is perfect. The buttons wobble a bit, and the underlying plastic is soft – pricier machines feel sturdier as you might expect.

The layout isn’t great, either: while you do get that numberpad and extra audio buttons, you’ll have to deal with small cursor keys and a single-height Return button. And while you do get RGB LEDs, it’s single-zone lighting without much customisation.

The trackpad is large enough, but its buttons are soft and uneven. Even if you’re a casual gamer, a USB mouse is better.

The 15.6in IPS display pairs its 2560 x 1440 resolution with a decent 165Hz refresh rate – both of those figures are an upgrade on last year’s notebook.

The display’s contrast ratio of 1283:1 is ample and high enough to provide good levels of depth and punch, and colours are accurate. The delta E of 0.7 is superb, the colour temperature of 6,450K is excellent and the screen rendered 95.7% of the sRGB gamut.

Those are fantastic results, and they mean your games will look excellent. This panel is comfortably better than the Nitro 5’s screen, which suffers from poor colour quality and gamut coverage.

The only issue here is the peak brightness level of 308 nits. That’s fine for indoor use, but it’s not high enough for outdoor use. Also, if you’re a keen eSports fan, you’ll want a laptop with a 240Hz or 360Hz display – this machine’s 165Hz rate is great for mainstream competition, but nothing more.

The speakers have a surprising amount of bass and volume, but the top end is incredibly tinny. They’re barely acceptable if you have no other choices, but a headset will be far better.

The Asus TUF Gaming A15 we’ve reviewed deploys an Nvidia GeForce RTX 3060 GPU with a solid power limit of 100W.

Processing grunt comes from AMD’s new Ryzen 7 6800H, which has eight cores and a peak speed of 4.7GHz. The rest of the specification is reasonable: there’s 16GB of dual-channel DDR5 memory and a 1TB SSD with fine everyday read and write speeds of 3,145MB/s and 2,072MB/s.

The TUF’s RTX 3060 has a higher power envelope than the same GPU inside the Acer, so it delivered better benchmark results: the Asus scored 49,215 in 3D Mark Night Raid, while the Nitro was 10,000 points behind. Unsurprisingly, the A15 enjoyed a real-world lead in Far Cry New Dawn: its 1080p Ultra average of 87fps was five frames better than its rival.

The Asus performed well at its native 2,560 x 1,440 resolution. That Far Cry result only declined by five frames, and the laptop averaged 41fps in Cyberpunk 2077 at 1440p with ray-tracing and DLSS – and a smoother 68fps at Medium settings. This machine will run any single-player game at 2,560 x 1,440, and you’ll only have to dial back the quality levels in the toughest titles if you want to hit 60fps averages.

There’s ample power for eSports, too: the Asus scythed through Rainbow Six Siege with an Ultra average of 234fps, so it’ll easily satisfy the 165Hz screen.

The TUF Gaming A15 (2022) has extra performance modes, but they’re inconsistent. Turbo mode added a couple of frames to benchmark results while creating loads of extra noise, so it’s only worth using with a headset. The Windows mode had negligible performance impact, while Silent restricted games to 60fps and reduced noise so it’s ideal if you want to run mainstream games with less fan output.

The A15’s fan noise isn’t awful anyway. During games the fans are audible, but they’re consistent and only moderately loud – quieter than many other gaming notebooks. The external panels weren’t too warm, either.

The new AMD processor scored 9,946 in the Geekbench multi-core test, which is nearly 2,000 points beyond the Acer’s older AMD chip. While that bodes well for everyday workloads and content creation, the new Intel Core i7-12700H is faster still, and better if you need a chip for tougher work.

Asus even delivers surprisingly good battery results with the latest A15. During a modest work test with the display at a reduced brightness level (120 nits), the Asus lasted for nine hours and it made it through eleven hours of video playback.

If you push the hardware harder or increase screen brightness then expect those figures to decline, but you can use this laptop for a full working day if you’re careful.

As ever, though, don’t expect much longevity in games. The A15 lasted for one hour and twenty-four minutes in a gaming test, which is marginally better than the Acer Nitro 5 but not brilliant. Graphics grunt reduces if you use battery power, too.

That’s not particularly budget-friendly, but if you want to save cash, UK users can buy an A15 with RTX 3050 Ti graphics, 512GB SSD and an identical specification elsewhere for £1,199 from Amazon or  £1,272 via Ebuyer.

The cheaper UK model offers better value thanks to its 165Hz display and superb AMD processor, although the weaker graphics mean you’ll have to dial back graphics settings and resolutions more frequently.

Check out our chart of the  best gaming laptops to see all the top options right now. If you need something cheaper then head to our best budget laptop chart.

There’s a lot to like about the Asus TUF Gaming A15 for 2022. It’s got the power to run mainstream games on an impressive 1440p screen, and its AMD processor offers good productivity performance. The A15 even manages to supply decent battery life in non-gaming situations.

It’s an affordable laptop, though, so the A15 isn’t perfect. Its keyboard is fine for gaming but the trackpad is poor, its connectivity and build quality are mediocre, and Intel’s latest processors are faster than the Ryzen 7 6800H if we’re going to nitpick.

No notebook will be perfect at this price, though, and the A15’s issues aren’t ruinous – there’s still enough quality here to handle everyday life and this won’t be the last gaming laptop with a poor trackpad.

The Asus TUF Gaming A15 offers good quality in most key areas, so it’s an excellent choice if you want a versatile gaming laptop without breaking the bank.