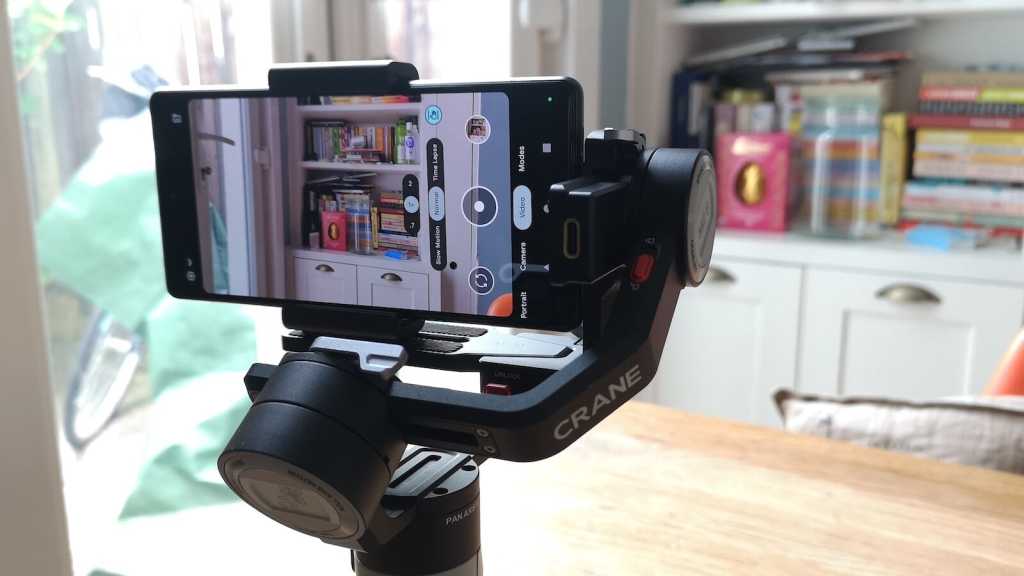 The Zhiyun Crane M2S is a solid mutli-purpose gimbal which is a good staring point for relative newcomers to videography, those who want something relatively affordable, but with features beyond what you might get with an entry-level device. It does have a few snags which may frustrate more seasoned users, and physical limitations mean that its main selling point, that you can use it with a range of phones and cameras, might be oversold if an encased Pixel 6 can’t sit comfortably in there.

The Crane M2S is the latest multi-device stabiliser from Zhiyun aimed at vloggers armed with an arsenal of phones, action cameras and mirrorless cameras who want one gimbal that works with them all.

Easily collapsible, the Crane M2S can be quickly packed up and can be bought with a carry case, so you’ve somewhere to stash the tripod, mounts and cables between shoots. As well as saving on space, the Crane M2S promises over 10 hours of battery power, so is ideal for the most gruelling of shooting days.

As with the Crane M2 and its bigger sibling – the Crane M3 – the main selling point of the Crane M2S is its versatility – it’s intended to work with a wide range of devices, but naturally, there are some limitations.

Zhiyun helpfully keeps a list of supported cameras on its site so you can find out whether your mirrorless device is supported, although you could run into problems if you attach some large, heavy lenses. Oddly, unlike other Crane models, Zhiyun doesn’t publish the maximum device weight which means you’ll need to check that list rather than going by weight.

The Zhiyun-branded clamp that’s included with the combo kit connects to the mount with a quarter-inch screw, and can expand to roughly 90mm (3.6in) wide. This should suffice for most phones, although if you’ve got a big phablet wrapped in a chunky case, you might have to look elsewhere.

I had some trouble balancing my Google Pixel 6 during the setup process, as it’s a large phone. Removing the phone’s case helped, but the lack of protection made me feel slightly nervous. Perhaps if the included quick-release plate had been a little bigger, it wouldn’t have been as tight a fit.

On that note, you’d probably want to get separate clamps and plates for everything if you’re the sort of person Zhiyun is aiming this at, i.e. you’ve got lots of devices you want to swap between them quickly. It’d save time just unclipping devices already mounted to quick-release plates rather than having to unscrew and re-mount everything.

Once everything’s balanced, thumbing on the Crane M2S sees it quickly stabilise, before letting you know it’s ready for use; if you’ve not correctly balanced it, it’ll beep and flash an ‘axis lock’ message at you. If you ever see this at any point, turn it off, re-balance, and start again.

By default, a press of the ‘M’ (mode) button on the Crane M2S will cycle through three standard modes, Pan Following (PF), Lock (L), and Following (F). Pan Following locks the tilt and roll axis while panning the camera as you turn. Lock keeps everything locked, letting you tilt and pan manually with the joystick, while Following gives you a bit of both, automatically rolling the camera while letting you manually pan and tilt. There’s no way to manually adjust the roll axis in any of the Crane M2S’s modes, though.

All modes are easy to get acquainted with, but a double-tap of the mode button unlocks a different tier of settings; Point-of-View (POV), Vortex (V) and Portrait (P) modes.

POV mode doesn’t lock the camera to any particular axis, and essentially lets you shoot more freely than the other modes, and could be handy when filming fast-moving subjects.

Vortex, as the name implies, is a fun mode which sees the camera spinning in a circle when you holding left or right on the thumbstick. Held horizontally, you can record barrel roll-type clips, or, with the gimbal held upright, you can point your camera at the sky or the ground to record a spinning ‘eye of the storm’-type clip.

Portrait mode is aimed at shooting with smaller devices which aren’t phones. It’s designed to shoot video content in portrait mode, whether that’s destined for Instagram, TikTok or something else.

In order to shoot in Vortex mode, I had to re-balance my Pixel 6, which necessitated some precise adjustments before it worked properly. Frustratingly, in order to use Portrait mode, the clamp needs to be rotated 90 degrees, otherwise your device will just point straight up at the ceiling. This requires re-balancing your phone, something we’ve not seen on other gimbals: you balance the device once and it works in both landscape and portrait modes.

Finally, there’s Go mode, which is accessed by pressing and holding the trigger button. This essentially locks the tilt axis while allowing for smooth rolls and pans. It’s an action mode, designed to let you track fast-moving objects. This takes a bit more getting used to, and having to keep your finger on the trigger feels restrictive at first.

The trigger, like the mode button, is a multi-purpose control. Double-tapping the trigger will return the gimbal to its default position, while a triple tap will see it execute a 180° pan, setting you up perfectly to do a piece to camera.

Getting used to all of the double- and triple-taps required to execute quick pans and mode switches can be baffling, but the comfortable shape means it shouldn’t take long before you quite literally get to grips with things.

Other physical controls at your disposal are a record button (for use with compatible cameras) a red switch for the fill light, and the menu button. The LEDs are a useful addition: they’re reasonably bright and you get some fun, coloured gels included. The Crane M2S’s menu is very simple; there are calibration options, options to adjust motor speed and thumbstick sensitivity, and that’s your lot. The display is also not very bright, which may cause problems when shooting on sunny days.

The ZY Play app lets you turn your phone into a remote Bluetooth control, and is handy for situations where you need to keep the Crane M2S static, possibly because you’re trying to stealthily capture footage of your cats, although the controls here are overly sensitive. The first few times I used it, I inadvertently sent the gimbal spinning in circles when all I wanted to do was a smooth 90° pan.

Zhiyun says that you’re supposed to get 10 hours 35 minutes out of the Crane M2S’s battery, but that figure is based on it being kept in PF mode, using a Sony A7C with a Sony E F4 10-18mm oss lens.

After several days of playing around with the Crane M2S, I got somewhere between seven to eight hours per session, but I’m chalking a lot of that up to getting to grips with the thing, switching between and testing out all of the modes, using it with the Pixel 6 via Bluetooth and other stuff that isn’t necessarily normal, real-world use. I would say that somewhere around seven hours is a more realistic expectation.

The good news is, from near empty, the Crane M2S charges back up to full in under two hours using the supplied mains adapter, thanks to 12W PD fast charge support.

Buyers in Australia can also pick up the standard kit from Zhiyun for AU$469, but at the time of writing, it was not available to buy from the Zhiyun US store.

Amazon UK has both the standard kit and the combo kit available to buy now for the same prices, and Wex Photo Video also stocks both the Zhiyun Crane M2S on its own and as part of the combo deal.

For alternative recommendations, see our roundup of the best gimbals.

The Zhiyun Crane M2S has a lot to offer, especially if you opt for the combo kit, which gives first time videographers a lot to get cracking with. Battery life is good, and despite some confusing-at-first menu options, the Crane M2S is easy to get familiar with.

You will likely run into problems when shooting with bigger phones, and it’s likely that bigger, heavier cameras with long lenses will have the same problem, as there’s not a great deal of clearance between the base of the Crane M2S and the quick-release plate.

People who’ve been around the block a few times might prefer to look at the more expensive (but more capable) Crane M3, which supports more mirrorless cameras, and features a touchscreen display. On the other hand, it is a lot more expensive than the Zhiyun Smooth Q3, which costs a mere £90.