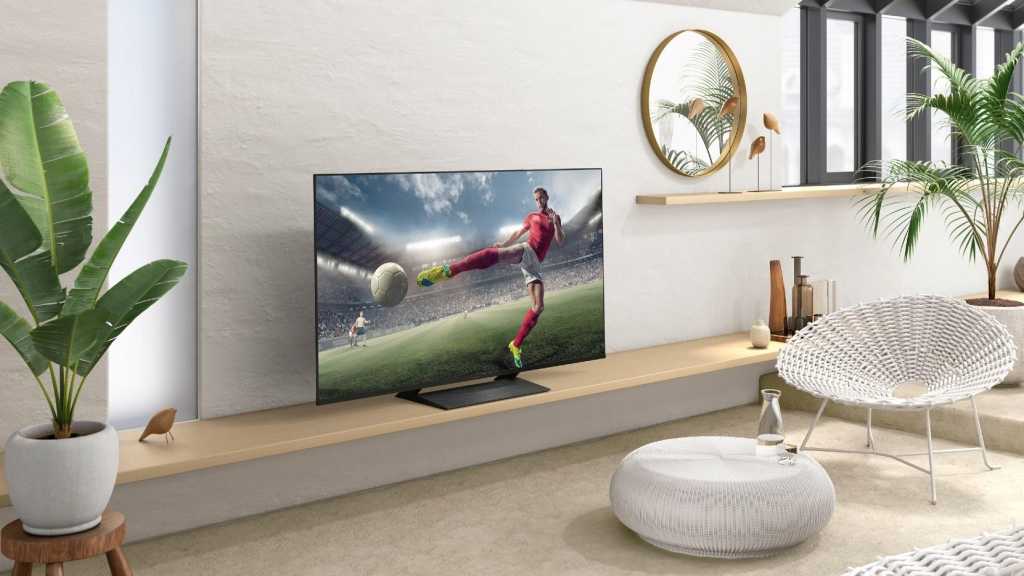 This Panasonic a 4K LED Dolby Vision TV is a smart buy if you’re after a screen suitable for movies, sports and 60Hz gaming. Using an HDR Bright Panel Plus screen, it’s particularly good in rooms with high ambient light.

Panasonic is best known for the cinematic image quality of its 4K screens like the JZ2000, but with the JX850 it’s looking to satisfy a rather different demographic with a much lower price. Here, overall panel luminosity is high, making this a screen for bright room sports and gaming fans.

However, the TV does boast Filmmaker mode with Intelligent Sensing, and supports Dolby Vision and HDR10+ Adaptive formats, in addition to the HDR10 and HLG (Hybrid Log Gamma). So it’s certainly no slacker.

Audio compatibility extends to include Dolby Atmos, which can be routed from the set over HDMI eARC to an external sound system. All this with prices starting at £529 for a 50in model which is the one on test here.

The JX850 looks and feels premium for that reasonable price. The screen has a wafer-thin bezel and sits on a wide pedestal, which slots in like two separate feet. The panel itself is positioned on top of the frame, creating a novel two-step border; it’s a design trick we’ve seen before from the band, but it adds a premium flourish.

Edge-lit, it’s slim at just 63mm, and tips the scale at 16kg with a stand (which, it has to be said, requires quite some assembly!).

There are three HDMI inputs, all ALLM (Auto Low Latency Mode), and there’s eARC for sending audio to a soundbar. There’s no support for 120Hz playback which requires HDMI 2.1, so next-gen gamers hoping to see their consoles like the PS5 hit 120fps will need to look elsewhere.

Additional connections include analogue AV, a digital optical audio output and Ethernet, to support Wi-Fi and Bluetooth. Dual Bluetooth connectivity means the set will transmit to two paired headphones simultaneously, for private listening which is neat. There are also two USB ports should you need them.

The JX850 runs the latest version of Panasonic’s own smart TV portal, my Home Screen 6.0. This new iteration introduces My Scenery, which allows users to select images and videos to provide background ambience – a little like   Samsung’s The Frame – and also comes with an On Timer which allows you to set a wake-up call, with channel selection.

The JX850 also works with Amazon Alexa and Google Assistant, so you can use voice commands to check the weather or news, as well as control the screen.

The set also has a Freeview Play tuner, which delivers all main channel UK Catch-Up TV services, including BBC iPlayer, ITV Hub, All 4, My5 and UKTV Play – and yes, the BBC iPlayer app supports 4K. However, there’s no satellite tuner option on this model.

Despite the lack of 120Hz, and VRR (variable refresh rate), the screen is a decent buy for console owners. I measured input lag at 10.4ms (1080/60) with Game mode selected. That should be more than good enough to keep you ahead of the competition.

The JX850 certainly makes good on its Bright Panel Plus promise of higher than average picture levels. The panel has a wide colour gamut, for maximum pop.

Any suspicions Auto AI would not sensibly balance the demands of movies and sport prove largely unfounded, and for most users, this would be my recommended viewing option. But it does favour image interpolation, courtesy of Panasonic’s icy smooth Intelligent Frame Creation cocktail.

I rate the TV’s HDR performance slightly above average for its class. Peak HDR brightness was measured just shy of 500 nits using the Normal preset, within a 10% measurement window, and the Adaptive Backlight set to Off.

Dolby Vision Bright seems to rob the image of contrast and punch. When watched in a room with high ambient light, Dolby Vision Vivid actually looked pretty good. However, when you select Dolby Vision Vivid, motion interpolation on its Max setting kicks in, with smoothing clearly visible.

Edge lighting invariably brings issues. I noted some backlight uniformity problems, with light pooling around the bottom of the screen, but this is only really noticeable in certain situations, for example when watching a letterbox movie. For general full-screen viewing, the evenness of tone is quite acceptable.

Panasonic describes the set as having Local Dimming Pro technology, but this shouldn’t be confused with true local dimming and zone control. It’s actually a reference to some sophisticated light control around the edge of the panel.

The set has a fairly routine two-channel audio system, powered by 2x10W amplification. Audio modes cover Standard, Music, Speech, Stadium and User. Onboard audio is perfunctory, but not short of volume.

The Sports preset boosts greens and blues in the image, and also applies post-processing on the audio front to create an enhanced sense of ambience. It’s quite effective.

Helpfully, the JX850 is compatible with Dolby Atmos, and will route immersive audio out of the set to a compatible soundbar for more cinematic sound.

You can buy it from Amazon, Currys, Laptops Direct, Argos, AO and Richer Sounds.

In many ways, the JX850 is an atypical LED TV from Panasonic. It’s clearly got traditional LG and Samsung buyers in its sights, offering a performance optimised for daylight rather than late-night viewing.

The brand’s HCX Pro AI processor, with its Auto AI picture setting, is particularly impressive. I also like the brand’s customisable My Home smart platform and the screen’s overall design is the right side of premium.

Its gaming appeal is also considerable, provided you’re not fixated on HFR playback, thanks to its low latency performance but there’s no 120Hz support here.

Other small downsides include a basic sound system and some pooling from the edge lighting, particularly when watching letter-box content.

Long story short: the Panasonic JX850 is an excellent screen given its upper budget price tag, and well worth short-listing.