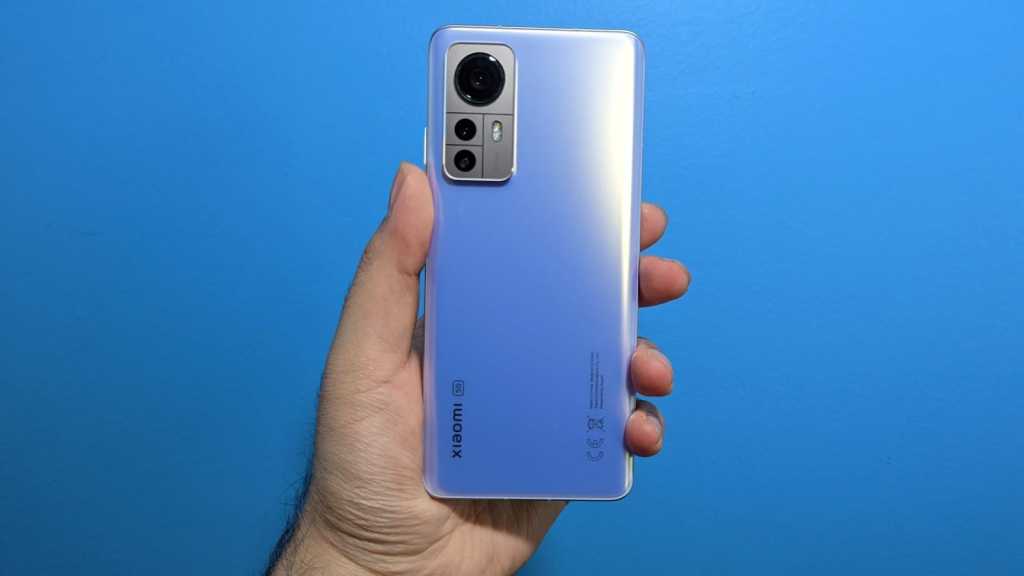 The Xiaomi 12X with its solid set of specs is something to consider for its price but it does come with some shortcomings.

With the 12X, Xiaomi has basically taken its Mi 11X from last year and has made an ‘S’ variant since the two models are very similar (including the exact same processor).

While it shares a lot with the Mi 11X before it, there’s a lot to like with the Xiaomi 12X like the beautiful AMOLED screen, snappier performance and twice as fast charging. It’s also a cheaper option than its stablemates, the Xiaomi 12 and Xiaomi 12 Pro.

Like its Xiaomi 12 counterpart, the Xiaomi 12X is fairly compact and easy to hold in one hand. This is especially helpful for those not interested in the massive phones of today like the Galaxy S22 Ultra or Pixel 6 Pro.

At just 176g, the phone has just the right amount of heft. Part of that is because the phone is made from aluminium and Gorilla Glass Victus which makes it feel like a solid slab of metal and glass without making it seem too heavy.

Speaking of the back, the Xiaomi 12X comes in a number of colours but the review unit provided was in the purple option which is a subtle colour but looks great compared to the black and blue options.

There is a camera bump on the back of the device which can make the device wobbly on a table. Thankfully, Xiaomi does offer a clear case in the box, so you can still admire the colour and keep your phone flat on a table.

One major omission on the 12X is an official IP rating, the phone is splash resistant but it’s probably not a good idea to go for a swim with the phone, as it likely won’t survive.

For the display, Xiaomi has gone with a 6.28in AMOLED display, which is Full HD+ in resolution and supports HDR10+ and Dolby Vision for video content that supports those standards.

Like most Android flagships these days, the 12X’s display features a 120Hz refresh rate that is adaptive and can switch between 60Hz and 120Hz either automatically or set by the user. This is the same as the Xiaomi 12 and you’ll have to get the 12 Pro to get an LTPO display that can go all the way from 120- to 1Hz.

The display looks great in most lighting conditions, thanks to its 1,100 nits of peak brightness. The screen also features an in-display fingerprint reader that works fairly quickly at unlocking your device.

For speakers, the Xiaomi 12X has stereo speakers (one on the top and one on the bottom) that are tuned by Harman Kardon and support Dolby Atmos. The stereo speakers can get fairly loud and sound good but can vary depending on what music you are playing through them.

There are some options to adjust the Dolby Atmos settings like between Dynamic, Music, Video etc but I found that leaving it on Dynamic gives the overall best sound.

Like its predecessor, the Xiaomi 12X is running Snapdragon 870 which isn’t as new and flashy as the Snapdragon 8 Gen 1 that is in the 12 and 12 Pro. It’s also the same chip found in much cheaper phones like the Poco F3 and Moto G100.

Having 8GB of LPDDR5 RAM and the UFS 3.1 storage really helps make the phone feel faster. Everything from opening apps, using the camera and playing games is snappy. Plus having that 120Hz display helps make the experience feel a lot smoother.

You can see how it performed in benchmarks below including the other Xiaomi 12 models and key rivals. It’s worth pointing out that the similarly priced Realme GT 2 comes with a newer Snapdragon 888 processor so offers better futureproofing than the 12X’s 2021 chip.

With the Snapdragon 870, you’ll be getting 5G support (with dual-SIM 5G standby support) along with Wi-Fi 6 support and Bluetooth 5.2.

Instead of going with a super high megapixel count for the camera, Xiaomi has decided to give all three models in the 12 series the same MP count – for the main sensor at least. The main camera on the 12X is a 50Mp sensor alongside a 13Mp ultrawide and 5Mp telemacro.

It would have been nice to have a telephoto lens instead of a macro lens as it’s more practical in everyday use.

The main lens on the 12X can capture some great photos. When in ideal lighting conditions, the photos from the main lens have vibrant and somewhat punchy colours that really pop. But if you’re looking for something that is more natural-looking, you’ll want to look elsewhere for your camera needs.

The night mode is a bit of a different story if taken with some good scene lighting like a street lamp or ambient light, then night photos will turn out great. But shooting something that’s basically complete darkness won’t offer any good results.

That being said, you can opt to shoot in 50Mp but you won’t have access to the other lenses, just a 2X cropping in.

On the video side of things, the Xiaomi 12X can shoot in up to 8K but it’s limited to 24fps. You can also shoot in up to 4K/60fps and 1080p/60fps. Video quality is great in both 4K and 1080p with a colourful palette and OIS (optical image stabilization) that keeps your footage looking smooth.

Around the front is the 32Mp camera that is made for selfies that look great with a good amount of detail to make your subject (most likely yourself) stand out.

Despite its thin profile, the Xiaomi 12X has a fairly beefy 4500mAh battery. The Xiaomi 12X was able to easily last a full day, without needing to top up in-between the day, even when the display is set to 120Hz and 75-80% brightness.

In our PCMark for Android test, the Xiaomi 12X lasted 11 hours and four minutes, which is a solid result outpacing many rivals.

Unlike the Xiaomi 12 and 12 Pro, the 12 doesn’t feature wireless charging. If you do need to charge up, though, the Xiaomi 12X comes with a 67W charger that can charge to 50% in 15 minutes and 90% in 30. The phone does get fairly warm when using the fast charger but nothing too uncomfortable.

Similar to other Android devices these days, the Xiaomi 12X features the brand’s own variant of adaptive charging called Optimised charging. This feature will help reduce battery ageing and will learn from your daily charging habits.

On the software side, the Xiaomi 12X is running Android 12 with the company’s latest MIUI 13 running on top. While it’s still distinctly Xiaomi, there are some elements of stock Android or something you’d find on the latest Google Pixel phones.

There are quite a few pre-installed apps like Facebook, Spotify and a couple of mobile games like Bubble Shooter & Friends but thankfully these can be uninstalled with ease.

For those looking to add a bit of style to your Xiaomi 12X’s UI, there is a Themes app with lots of free and paid wallpapers, ringtones, and icon styles to choose from.

For software updates, Xiaomi has previously promised three years of Android updates and four for security updates. This means you should be able to update your Xiaomi 12X to at least Android 15.

It remains to be seen how timely Xiaomi will be when distributing their updates to their Xiaomi 12 series.

While the rest of the Xiaomi 12 series is available in the UK, there’s currently no release information for the Xiaomi 12X.

Check out more options in our best phone and  best mid-range phone charts.

The Xiaomi 12X is a good overall device that will catch the eye of a few prospective phone buyers for a number of reasons.

First, the device is on the smaller side compared to other flagship smartphones and despite its $649 price, it looks and feels like a well-made and premium device.

While you aren’t getting the latest chip from Qualcomm, the Snapdragon 870 is still plenty powerful for everyday tasks. Plus you’re still getting a 120Hz AMOLED display, fast 67W charging and a set of cameras that works well in most situations.

There are some downsides to the Xiaomi 12X like the lack of wireless charging, official waterproofing and MIUI won’t be to everyone’s tastes.

If you want better cameras, look to the Pixel 6, otherwise the Realme GT 2 will be an excellent choice if your heart isn’t set on a metal and glass design.