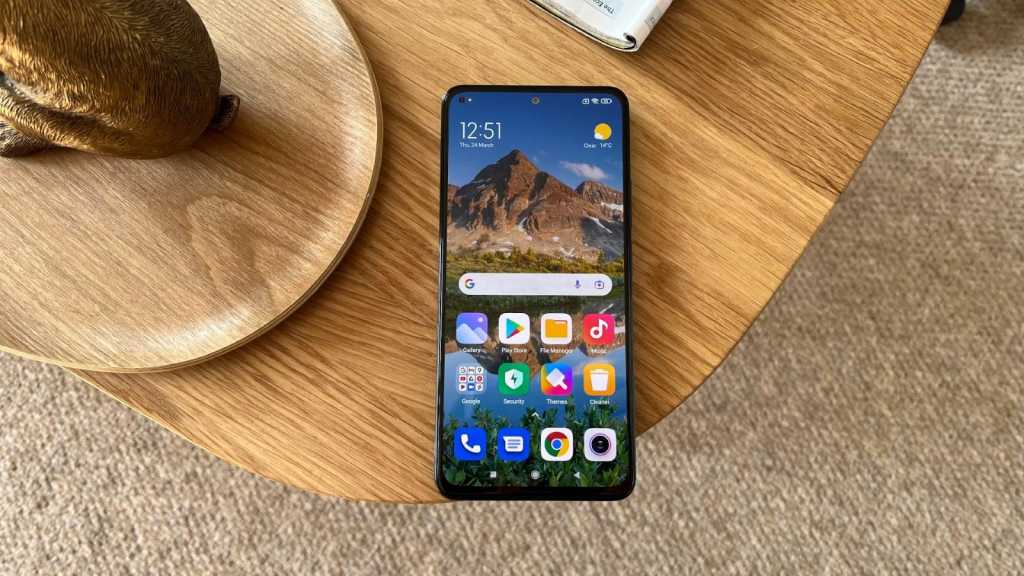 The Note 11 Pro+ 5G is an affordable phone that has more than its fair share of strengths. It may not excel in any particular area, but it does most things very well for the price.

Not content with offering no less than four other Redmi Note 11 models this year, Xiaomi has also treated us to the Redmi Note 11 Pro+ 5G.

With the new 11S 5G, the Redmi Note 11 range has no less than six models to choose from. The Pro+ 5G on test here is now the top-spec option and adds headline features such as 120W HyperCharge meaning you can fully charge the phone in just 15 minutes, according to Xiaomi.

All still without breaking the bank thanks to a starting price of £369 and you’ll be able to get it in May. So, how does it compare to its stablemates, as well as other affordable phones?

In terms of its appearance, it’s hard to distinguish the Pro+ 5G from the Redmi Note 11 Pro 5G, which is actually a good thing. It means the Note 11 Pro+ 5G treats the user to squared-off edges, a tidy rear camera module and a shimmering plastic back.

It keeps things simple, but with a minimalist, angular design that isn’t dissimilar from the iPhone 13 range, it may fool people as to its price tag. Much the same goes for its 6.67in edge-to-edge AMOLED display, which sports relatively narrow bezels and is punctuated only by a punch-hole selfie camera at top-centre.

The uncluttered design is also helped by keeping both the volume and power buttons on the phone’s right-hand side. The power button doubles as a fingerprint sensor, which is satisfyingly responsive and reliable. This contrasts somewhat with the face unlock feature, which despite being perfectly responsive comes with a warning that it can be tricked by photographs (and doesn’t work well in low light).

Other design features include speakers on the top and bottom edges of the device, as well as a 3.5mm headphone jack at the top. The bottom edge also welcomes a USB-C slot for charging and a hybrid SIM-microSD card slot on the left. This lets you expand the 11 Pro+ 5G’s storage with up to 1TB.

It’s worth pointing out that, at 164 x 76 x 8.34mm, the Note 11 Pro+ 5G is more or less the same size as the Note 11 Pro 5G. With a weight of 204g, it’s also comfortable to carry, despite being at the higher end of the size spectrum. I never once felt strained or uncomfortable using it.

One slight disappointment is that the phone carries only an IP53 rating, indicating resistance to splashes of dust and water. This is a welcome feature, but in a world where IP67 and IP68 ratings are now the norm, it could be better.

The Xiaomi Redmi Note 11 Pro+ 5G boasts a 6.67-inch Full HD+ AMOLED display, with a 20:9 aspect ratio and a resolution of 2400 x 1080 pixels. This makes it a relatively tall smartphone, although it never feels impractical.

The display itself provides some crisp visuals, with its AMOLED panel enabling a rich palette of colours and deep blacks. One of its headline features is the support for a 120Hz refresh rate, which makes for seamless scrolling and animations. This will result in faster battery drain though, so you can switch back down to 60Hz if you’re not too fussed.

The screen provides a good level of brightness, with a max of 1200 nits and an average of around 700. The auto-brightness feature can lag a little as it adjusts to changes in ambient light, although it becomes more effective as it learns your patterns.

Videos are generally bright enough for viewing in most environments, although I have found myself needing to crank up the brightness levels when watching certain shows and films on Netflix.

One welcome display feature is Reading Mode, which basically removes blue light and ‘warms’ up the screen’s palette. It can be scheduled to activate at night, allowing you to read in bed without unduly straining your eyes.

The Note 11 Pro+ 5G is powered by a MediaTek Dimensity 920 5G processor, which is a mid-range chip also found on the Realme 9 Pro+. It’s made using a 6nm manufacturing process, making it relatively nimble, although there are faster processors out there.

The phone carries 6GB of LPDDR4X RAM as standard, although it can be had with 8GB at an extra cost (my review unit had the latter).

It also houses 128GB of UFS 2.2 internal storage, with the option to buy a more expensive 256GB model. Regardless of which configuration you go for, all versions of the Note 11 Pro+ 5G come with a microSD card slot, enabling users to increase overall memory by up to a further 1TB.

Performance is generally very smooth. Apps launch at a moment’s notice, while scrolling and switching between screens and windows is pretty slick. Most importantly, users will encounter few if any problems when running more recent and demanding games, such as Asphalt 9 and Call of Duty: Mobile.

Graphics and animations are mostly fluid, with very little lag and slow down. So for a relatively cheap phone, the Note 11 Pro+ 5G definitely punches above its weight.

This claim is supported by the phone’s benchmarks as you can see above. These are in excess of not only the Redmi Note 11 Pro 5G, but also other affordable mid-range devices, such as the OnePlus Nord CE 2 5G.

In theory, the Note 11 Pro+ 5G is a versatile camera phone, spoiling users in respect of its asking price. That said, the 108Mp main camera is really the only rear lens that provides consistently pleasing and usable photographs.

By contrast, the two other rear lenses are inconsistent and sometimes frustrating. This is not an uncommon situation for budget and mid-range phones at the moment.

For example, landscape and portrait pictures are generally very good in ideal conditions. Colours are bright and well-defined without being overly bold, while the level of detail is comparable to what you’d enjoy with a more expensive phone. Unfortunately, as soon as you try taking a panoramic, ultrawide shot the quality starts to dip, with a slight loss in clarity and a corresponding increase in noise.

The same thing applies to the macro lens, which despite offering close-ups doesn’t always match this with a proportionate level of detail. You’ll also need to be careful when taking shots since the phone doesn’t always focus on what you’re attempting to capture.

With regards to the phone’s Night Mode, you can take some attractive and creative photographs if you have enough patience. Again, the phone’s camera software won’t always automatically hone in on what you’re trying to do, but if you frame shots in the right way and adjust brightness, you can end up with good results. Of course, shots won’t be especially naturalistic, given that processing is compensating for a lack of light.

Unlike the Redmi Note 11 Pro, the Note 11 Pro+ can shoot 4K video at 30fps and also 1080p at 60fps. This provides the opportunity to take some nice clips, although as with the ultrawide and macro lenses, you will need to be careful. This is mostly because there appears to be no optical stabilisation (OIS), meaning you’ll have to hold the phone with a steady hand if you want steady footage.

These quibbles aside, the Redmi Note 11 Pro+ 5G’s camera capabilities are generally very good, even if it isn’t quite as versatile as it would like you to think.

It may be smaller than the Note 11 Pro’s, yet the 4500mAh battery is one of the Note 11 Pro+ 5G’s biggest selling points. That’s largely because it comes with a 120W charger, which Xiaomi claims can take the phone from 0-100% in 15 minutes.

As outlandish as this claim seems, it’s almost borne out in practice. I’ve timed the phone as it recharges from dead to full, and while it didn’t quite manage 15 minutes, I clocked it at 20. You can also go from, say, 20% to 100% in just under 10 minutes, making the device ideal for anyone in a rush.

As for the battery itself, it does a good job of lasting an entire day under moderate-to-heavy regimes, while light users are likely to last two days. On the other hand, if you always use the 120Hz refresh rate and play around with the phone almost constantly, you may on occasion find yourself running dangerously low on battery power by the end of a single day.

In our usual PCMark Work 3.0 battery life benchmark the Pro+ lasted an impressive 11 hours and 30 minutes, outpacing many rivals.

Out of the box, you’ll be using Xiaomi’s MIUI 12.5 running over Android 11, which is slightly odd considering the rest of the Redmi Note 11 range comes with MIUI 13.

As far as Android skins go, MIUI is a user-friendly operating system with a bright colour scheme and a fairly simple layout. While it isn’t quite as sophisticated as something like OneUI or OxygenOS, it does allow for significant customization, enabling the user to tailor the experience to their tastes.

The home screen can be adjusted to launch either Google search or the usual app drawer, text and icons can be resized, floating windows can be added, and there’s also a Lite mode for simplifying the interface even further.

Overall, MIUI 12.5 is a stable OS that’s quick and easy to navigate. Everything loads properly and there isn’t too much bloatware, although none would be preferable. Despite this, users may encounter one or two glitches along the way and at Tech Advisor towers we’re not keen on the somewhat chaotic settings menu.

My primary nuisance was that the phone disconnected from my Wi-Fi network too easily when I ventured further away from the router, even though my main phone, an iPhone 13, remained connected. This entailed entering the quick settings menu and reconnecting again on numerous occasions, which is not something you want to do too often on a device that revolves around being connected to the internet.

It also needs to be remembered that the Note 11 Pro+ 5G ships with Android 11, which is not the latest version of Google’s OS (that would be Android 12). This isn’t necessarily a problem in and of itself, but when Redmi devices are known for providing only two core Android updates, the device may only reach as far as Android 13 before effectively becoming obsolete. This is a disappointment, although the phone will most likely receive security updates beyond Android 13.

Having been available in China since November, the Redmi Note 11 Pro+ 5G is now available to buy from Xiaomi in Europe, South East Asia, the Middle East and other international markets starting from US$369. There are two more models as follows:

In the UK you’ll only be able to buy the cheapest model at £369 and Xioami tells us it will launch in May via the Mi store and Amazon.

A slightly different model – lacking the 120W HyperCharge but containing a 5,000mAh battery – is also available in India from ₹19,999.

Xiaomi doesn’t release its phones directly in the United States, so Americans will need to import the device themselves if they want to get their hands on it.

Other potential alternatives can be found in our articles on the best Xiaomi phones and the best budget phones.

The Redmi Note 11 Pro+ 5G is a multi-talented mid-range phone that does many things better than it has any right to at its price.

Aside from its clean design, its 6.67-inch AMOLED display and strong performance are other highlights. Its main 108Mp camera lens will serve most photographers well, even if the other lenses aren’t as impressive.

Not only that, but its ability to charge from 0% to 100% in around 15-20 minutes is something most other phones can only dream about.