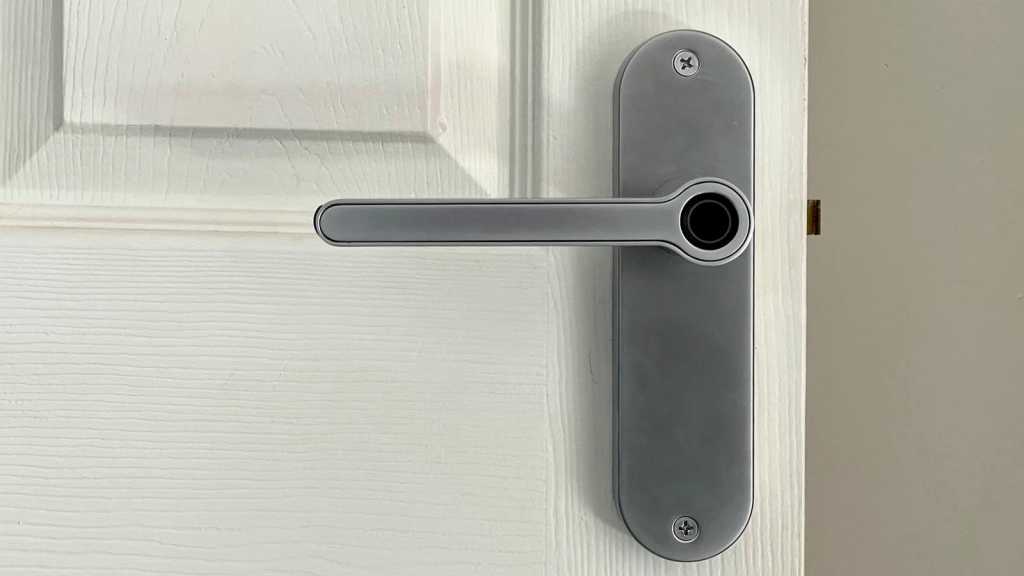 The Breeze is a well-made fingerprint door lock for internal doors, and a very convenient way to keep people out of your room.

Whether you want to keep kids out of your bedroom or you live in shared accommodation and want to keep your room private, a lock is the answer.

Traditionally, that meant a key-operated lock, or possibly a keypad lock if you wanted to avoid keys. But the modern door lock uses tech to solve the problem. Just as you can unlock many phones with a fingerprint, so you can with Blusafe’s Breeze.

It’s IP65 rated for water resistance, but the Breeze is designed for internal doors. You can opt for chrome, satin chrome and black finishes, and there’s a choice of a handle with a circular backplate that offers a modern look, but there’s also a ‘long’ version that’s designed to cover any existing screw holes from a previously fitted handle.

Whichever model you choose, the Breeze is quite chunky – it has to be in order to accommodate four AAA batteries on the ‘inside’ handle, and the motor, mechanical lock and other bits and pieces in the ‘outside’ one.

I opted for the long version so I could replace an existing handle and hide the screw holes. As the photo shows, there’s quite a difference in size between the two, and the 200x52mm backplate should be large enough to cover even holes from larger older handles, including those with a keyhole.

Blusafe sent the satin chrome model for review, but even the polished chrome model wouldn’t exactly match the other doors with the smaller handles.

No latch is supplied in the box: you use the existing one, or purchase one from elsewhere if you’re fitting a brand new door.

A helpful QR code at the front of the manual links to an also helpful YouTube video that shows you exactly how to install the Breeze.

Before you start the installation, check if the handles are facing in the correct direction. If not, you’ll need to remove a screw or three on the inside of the backplate, rotate the handle 180° and pop the screws back in. I found neither the common PZ2 or PH2 screwdrivers fitted, and it’s a shame at this price that Blusafe doesn’t provide the correct screwdriver in the box.

It does provide cardboard templates which you can fold around the edges of your door to ensure you drill holes in the right places. But if you are replacing an existing handle and use the self-tapping screws supplied, no drilling is required at all.

For a slightly neater finish, you can instead use the supplied sleeves and snap-off screws so that, on the outside at least, there are no visible screws. This option does require drilling two holes through the door.

I chose the quicker option of using an impact driver with the self-tappers. The outer handle must be fitted first, feeding the connecting wire through the hollow spindle (which replaces any existing spindle). Just one length is supplied, and it was the right size for my 35mm-thick door.

The inside handle can then be screwed on and, to finish, the wire must be carefully connected to the battery pack. A finishing plate is attached with magnets and can be removed by pushing the supplied pin through a hole in the back of the handle.

The first three are ‘admin’ fingerprints and after those, there’s space in the memory for 47 more.

To register, you use the pin to push the Set button, which is on the end of the internal handle, then press and remove your finger four times on the sensor.

When the door is shut, the external handle can be pushed down, but it won’t move the latch. Only when a fingerprint is recognised does the motor spring into action to engage the spindle, at which point the handle will operate the latch.

You need to press your finger on the sensor exactly as you did when you registered the fingerprint. Unlike a phone, which asks you to scan your entire fingertip, the Breeze captures only a portion, so you have to be somewhat precise when pressing your finger to the sensor.

If someone tries to unlock the door and their fingerprint isn’t recognised five times within five minutes, the handle will sound a warning and stop scanning for 90 seconds.

As a backup, two keys are provided. The keyhole is in the end of the handle, and works just as you’d expect. You inset the key, turn it 90° and then push the handle down.

A secondary backup is a microUSB port at the opposite end of the handle. You can connect a standard microUSB cable to a USB power bank to provide power if you’ve allowed the AAA batteries to run flat.

They should last up to eight months, according to Blusafe, but it recommends changing them every six. You’ll hear a warning beep when operating the handle if the batteries are running low. At that point, it should work a further 200 times before the batteries will be completely flat.

In testing, I found the Breeze worked well. It is, as mentioned, important to place you finger on the scanner in the same position and at the same angle as you registered it. That’s why it’s crucial when registering to place your finger as you would naturally do it when walking up to the door.

The motor is fairly quiet and there’s no noticeable wait between scanning your fingerprint and being able to use the handle – a couple of seconds at the most.

The LED ring provides visual feedback: it lights up blue when you press your finger against the scanner, then green if it’s recognised or red if not. And beeps do the same thing in case the LED isn’t easily visible in bright conditions.

Build quality is very good and though I was unable to verify battery life, it will largely depend upon how often the handle is used. If you keep the door shut all the time, but also regularly access the room you may find the batteries need replacing sooner. Conversely, if you only need to leave the door shut on occasion, or rarely need to access the room, they’ll last longer.

The Blusafe Breeze starts from £89.95 for the black model, and goes up to £104.95 for the long model in either of the chrome finishes.

You can buy a Breeze direct from Blusafe’s website, but it’s also available from Amazon for the same prices.

It wasn’t available in the US at the time of review.

Keys can be copied, and codes can be discovered, but a biometric lock offers the advantage that it can be opened only with the right finger. And, pressing your finger to the scanner is much faster than keying in a six-digit code.