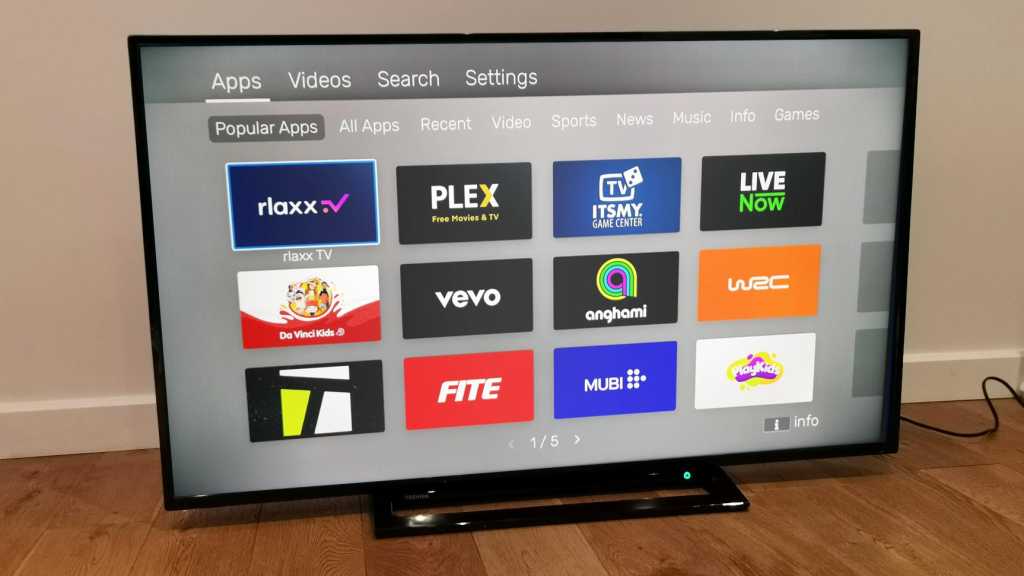 The UK31 is a solid value TV buy, offering a tempting combo of 4K bright room performance and smart functionality. It won’t win any beauty prizes and doesn’t have Disney+ but if you want an all-rounder with an admirable Game performance, it’s difficult to beat for the cash.

Is upper-budget a thing? If it is, the Toshiba UK31 fits the brief perfectly. This 4K model sits ahead of the massive-selling UL20, with fuss-free smarts and a performance that doesn’t let down the side.

The screen is neatly integrated with Amazon Alexa, so you can ask the set for news and weather updates, as well as control basic functionality. It has Dolby Vision HDR support, to make the most of Netflix streams, and it’s got a low latency Game mode too, which should please console owners.

It also won’t even break the bank if you want the largest 65in model, and the smallest 43in option starts at just £349. I’ve tested one of the middle options, the 50in size at £429.

So what exactly do you get for your cash, and how does it stack up against other popular 4K budget buys.

When it comes to design, the UK31 is the very definition of generic. The screen is framed by a gloss black plastic bezel that’s not particularly thin and has a matching central pedestal stand.

Build quality is plasticky, but that’s to be expected given the price tag. On the plus side, it’s light and could be wall-mounted without too much stress. This direct LED backlit panel isn’t particularly thin, but viewed square on that’s hardly going to be an issue.

As we’ve seen on previous Toshiba TVs, the power LED glows an unsubtle red or green, and can prove distracting in a darkened room. Connections comprise three HDMI ports (one of which supports ARC – audio return channel), USB and a digital optical audio output.

The set has two tuners, one satellite the other terrestrial Freeview Play. There’s also a headphone jack and CI card slot if required.

The Toshiba UK31 is well served with streaming services. Freeview Play guarantees a full complement of mainstream catch-up players (BBC iPlayer, ITV Hub, All 4, My5, UKTV Play and sundries), plus an extensive collection of box sets.

The Toshiba smart platform also offers a good range of streaming apps, including Netflix, Prime Video, Britbox, YouTube, Twitch, BBC Sounds, Deezer and Chilli. Disney+ is notable by its absence though so other sets like the TCL RP620K Roku TV or Hisense Roku TV (A7200UK) will scratch that itch if it’s a critical box to tick.

These are accessible via a dual-stacked shelf that runs across the bottom of the screen; you can also browse settings, sources, and TV channels from here, too.

The TV works with Amazon Alexa but not Google Assistant. Using a built-in far field microphone built into the TV, you can use Alexa to switch the TV on or off, change channel or source, and adjust volume. Standard Alexa queries are visualised on screen and Alexa can be activated even when the TV is in standby mode

While lacking some high-end gaming features, the set actually acquits itself well in terms of latency. I measured input lag at a decent 10.7ms (1080p/60fps) with Game mode engaged.

The set’s upscaling is quite effective: standard definition DVD footage looks reassuringly smooth, with jaggies on diagonals smoothed out, while HD Blu-ray content is pixel dense, mapped to 2160p.

Picture presets comprise Natural, Cinema, Sports, Game and Dynamic, with the first two being the obvious go-tos. However, to make the most of the panel it’s worth a quick tweak.

Out of the box, you’ll find the picture looks a little flat. By default, the Energy Saving mode is set to Maximum, which results in images looking particularly dull. For optimum performance, toggle this setting to Medium.

Inevitably there are limitations when it comes to black level – the letterbox bars of Star Wars The Force Awakens don’t quite make the Dark Side, and detail within Kylo Ren’s all-black hoodie are crushed, but the screen can still muster enough contrast to give images depth, and when viewed in a room with some ambient light, look pleasingly punchy.

HDR picture performance is about right for this calibre of set. I measured HDR peak brightness, using a standard 10 per cent window, at 400 nits.

In addition to HDR10 and HLG, there’s support for Dolby Vision, confirmed by the set’s Netflix streaming app. With Netflix content, your image preset choice opens to include Dolby Vision Bright and Dark. The Bright option would be our preference here.

It’s worth noting that the UK31 is best-watched square on. Off-axis viewing loses colour depth and contrast.

Audio is perfectly ok for everyday use and is able to go loud without sounding shrill. The set has a 20W downward-firing stereo sound system but supports Dolby Atmos, which is good news if you want to partner it with an Atmos soundbar or compatible sound system.

The models have no equivalent in the North American or Australian markets, because these Toshiba branded sets are produced under a pan-European licensing agreement with European maker Vestel.

You can buy them in the UK from the likes of Amazon, Currys, AO, Argos, Laptops Direct and Very.

The Toshiba UK31 is an above-average budget TV that manages to combine a decent level of performance with sensible streaming service support as well as Alexa smart functionality.

It’s bright enough for everyday living room duties and is a solid option for gamers, thanks to an enviably low input lag.

I was impressed by its largely benign image upscaling (so if you have a large collection of DVDs and Blu-ray discs, you’ll not be too discouraged giving them a spin), and 4K Dolby Vision image quality terrific for the cash.

Be sure to opt-out of the Maximum Energy Saving mode though, as this really hobbles picture performance. You’re also best off watching straight on and the lack of Disney+ might put some people off.

Overall, the UK31 is a good value 4K HDR telly with more upsides than its low price suggests.