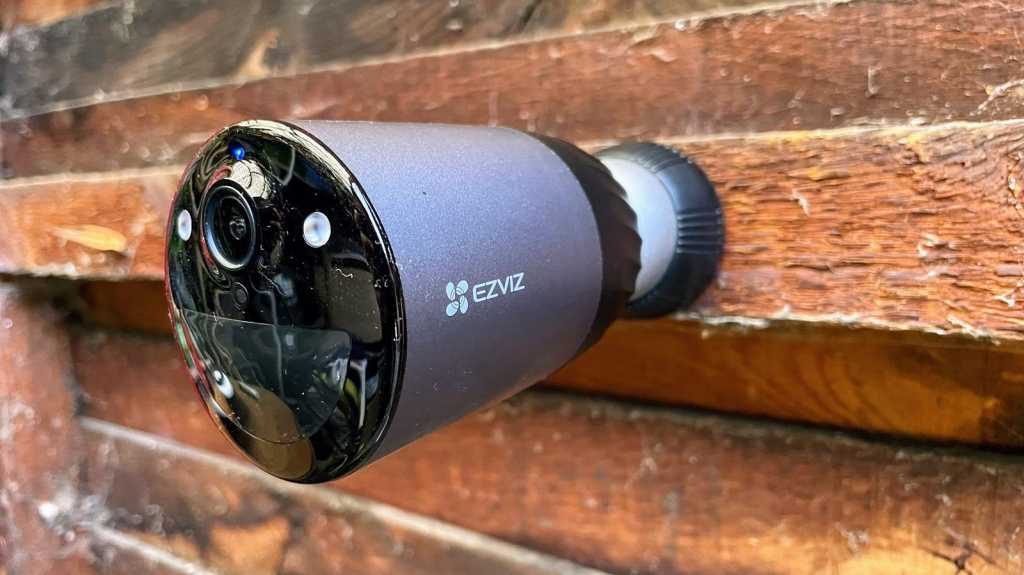 The app lets it down a bit, but if you want an outdoor camera to capture any visitors or intruders, the BC1C 2K+ does the job well.

Battery-powered, water-resistant outdoor security cameras are nothing new. There are too many to choose between, if anything.

But the Ezviz BC1C 2K+ stands out from the crowd. It’s packed with features, including built-in LED spotlights, two-way talk, 32GB of embedded storage for recordings, and on-board ‘AI’ for detecting people.

Plus, it’s not terribly expensive and – because of the on-board storage and fact that no features are restricted to paying subscribers, there are no ongoing costs once you’ve bought the thing.

The built-in 10400mAh battery is said to last for 270 days, but you can buy the optional solar panel (or buy a bundle containing both camera and solar panel) and never need to recharge that battery.

The metal-bodied BC1C 2K+ is a good looking gadget. It’s very easy to confuse it with the cheaper BC1C, which records at 1080p and has a smaller 7800mAh battery that lasts up to 210 days.

Depending upon the colour of your wall, or wherever you’re going to mount it, the dark finish might blend in well, or stick out like a sore thumb.

And, depending upon whether you want a conspicuous or stealthy security camera, the finish could be a good thing or a bad thing. It isn’t available in white, so it isn’t as if there’s a choice.

In the box you get two different mounts: one magnetic and one with a tripod-style thread for attaching to the camera. Both have a screw thread which attaches to the supplied plastic wall mount, and a drilling template sticker is provided in the box to make the job easier, along with wall plugs and screws.

The quick setup guide merely tells you to scan the QR code on the camera to see the full manual that gives more details on how to install and set it up.

In fact, once you’ve installed the Ezviz app, the process is very simple. Again, you scan another QR code on the camera itself, select your Wi-Fi network, enter its password and that’s pretty much it.

Video is recorded in ‘Ultra HD’ by default, with the other options being ‘Full HD’ and ‘Hi-def’. This is cheeky as it isn’t Ultra HD at all: this is (as the name suggests) a 2K camera which records at 2560×1440, and at 15 frames per second. The low frame rate is an acceptable trade-off for longer battery life.

Being a battery-powered device, the default settings mean it records when events are detected.

There are various modes which either save battery power or record for longer. Unfortunately, the app isn’t specific about how long the clips are in each mode.

I quizzed Ezviz about this, and was told that the app is being improved so these descriptions are clearer. I was also given a breakdown of what the modes actually do:

Record Mode is an unexpected bonus because it records continuously like CCTV and never goes to sleep. That drains the battery fast, which is why you’re advised to plug the camera in (to the mains), which rather defeats the point of a battery-powered camera, but at least there’s the option if you want to record continuously for a while.

The snag is that you can’t upgrade the 32GB of embedded storage, which is enough for around 4.5 hours at maximum quality. Even if you pay for the cloud storage, which costs a few pounds / dollars per month, that supports only event-based recording, not continuous recording.

Although you can change the mode manually, it’s possible to schedule which mode the camera uses at any time of the day, for any day of the week, adding as many ‘schedules’ as you like. Blue bars represent the time the camera will be in that mode, but it’s a shame different colours aren’t used for different modes, and no warning that nothing will be recorded for any unscheduled times.

These are just a couple of examples (among many) of how clunky and unclear the app is: there are almost too many options and too many buttons and menus, poor text formatting and at the same time not enough information about what the options do.

There are countless examples of poor English, too, and there’s no way to remove the CloudPlay banner which takes up space in the timeline view even if you never want to use the free trial of Ezviz’s cloud storage.

It’s also quite annoying that the offer of the free trial pops up as a full-screen advert and looks just like those scams which claim you’ve won a competition. Maybe that sort of thing appeals in China, but it has the opposite effect in the West.

There’s also a frustrating bug in the iOS app where, if you tap to see more details on CloudPlay, it’s impossible to return to the app’s home screen and you have to quit the app entirely and relaunch it.

The BC1C uses the old-school but reliable PIR as well as modern ‘AI’ to detect people. There is no animal, vehicle or parcel detection, but you will occasionally get notifications about motion that isn’t a person moving around.

I mounted the camera in a shed to keep an eye on my cat, who lives outdoors, and realised the BC1C 2K+ wasn’t going to keep me apprised of her comings and goings. However, it did reliably record every time I took her food, showing that the Human Shape Detection works well.

If you want, you can use a grid to draw rectangles that represent the zones that you want to monitor for motion. It’s also possible to adjust the sensitivity of the PIR detection. This means you can get the camera to ignore people walking along the road outside your house, for example, and record only when someone enters your property. There’s even a ‘Start debugging’ mode which should be called a ‘walk test’ that allows you to quickly set the correct sensitivity.

The two warm white LEDs aren’t nearly as powerful as the spotlights on mains-powered outdoor cameras, but they’re still very useful for lighting up the space in front of the camera, and for recording colour night vision, which is surprisingly good quality.

There’s a built-in siren which can be set to alert potential intruders that their presence has been detected, and you can also set the LEDs to flash when motion is detected (though this isn’t possible if you enable colour night vision). Oddly the settings for these aren’t under ‘Audio’ or ‘Light’ as you’d expect, but in the Notification menu.

That’s split into ‘Device-side’ and ‘App-side’. The App-side means notifications of events on your phone, but the options are virtually indecipherable.

Notifications themselves, are either standard or rich, but if you do manage to configure the options correctly, you’ll see ‘Smart notification’ and a thumbnail image of what has been seen.

You can trigger the alarm manually from the live view screen, but there’s no way to turn on the LEDs on demand, whether in the app or using Alexa or another smart assistant.

If you don’t like the siren, you can record up to three short voice messages and choose one to play instead of the siren when a person is detected. It’s an unusual feature, but a welcome one.

Video quality is great for the price. Definition is good, as are colours. Dynamic range isn’t amazing (there’s no HDR) and this means highlights often blow out to white.

However, for the price, it’s more than acceptable. At night, clips looks great when the LEDs are on because they provide enough light for good colour footage.

Obviously, they’re not powerful enough to light an entire garden or a large driveway, but as long as the activity is within a few metres, it’s clear to see what’s going on.

As mentioned, person detection is very reliable, and there were no missed events.

Testing over a couple of weeks meant it wasn’t possible to test the 270-day battery life claim, but it seems ambitious. Even with only a handful of recordings per day, the battery’s percentage dropped by over 1% each day. That’s an estimate of around 100 days, but your mileage will vary – as they say – based upon how much activity happens in front of the camera.

As Ezviz sent the solar panel, I also hooked that up and found it was easily able to keep the battery at 100% with even a couple of dozen recorded events per day. As testing was carried out in a particularly sunny period in March in the UK, it’s not possible to say whether it would keep it topped up on cloudy days, or when there’s less light available in winter.

I was also pleasantly surprised how well the camera worked on a relatively weak Wi-Fi signal. I was able to view the live feed throughout the test period with no issues, unlike the Google Nest Cam Battery which simply couldn’t handle the same signal and refused to connect most of the time.

If you don’t care about 2K and are happy with 1080p, then the BC1C is almost identical (but with a smaller-capacity battery) and that’s only £84.99 from Amazon.co.uk.

Again, at the time of writing, Amazon was selling the camera + solar panel bundle at a discounted price of £127, instead of £149.99, which is certainly the best-value option.

US readers will struggle to buy either version of the camera: it wasn’t sold on Amazon.com, nor Adorama or any of the other retailers Ezviz directs buyers to, and doesn’t sell products directly from its website.

For alternative outdoor cameras, have a look at our recommendations of the best security cameras.

Overall, the BC1C 2K+ is a good-value outdoor camera. It’s easy to set up, records reliably, has useful built-in spotlights, two-way talk, and doesn’t require a subscription to use any of its features.

It’s a slight shame that you can’t swap out the 32GB of storage for a higher-capacity SD card, but it’s plenty for most people.

The only real criticism is the clunky app, which is confusing to use and doesn’t clearly explain what all the features do. Ezviz promises that it is improving it, but I’ve been using it for years and seen little change over that time. So, if you do decide to buy the BC1C or BC1C 2K+, don’t expect a slick experience.