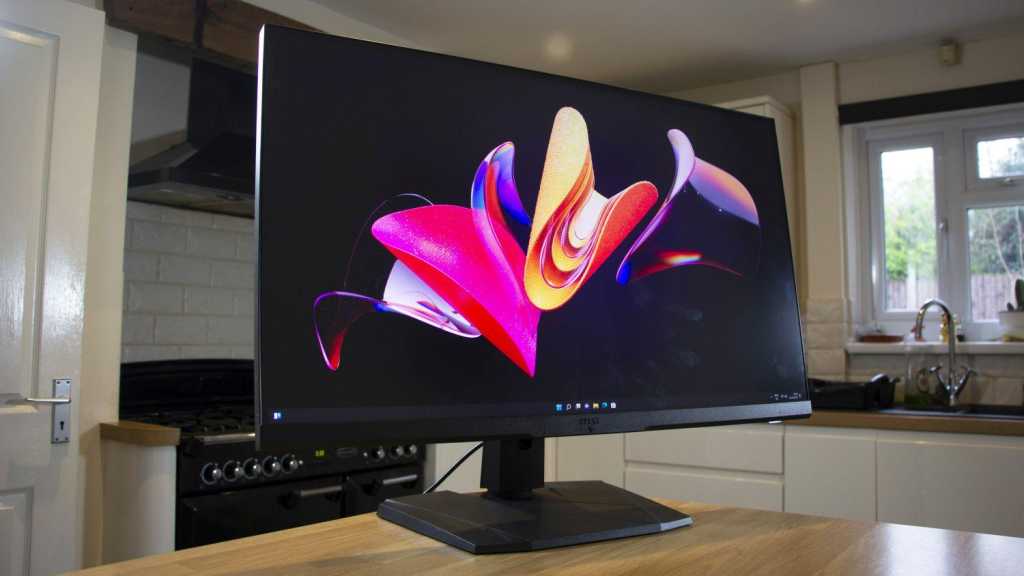 There’s lots to like here, from its vibrant colours and large size to its decent mainstream refresh rate performance and impressive slate of connectivity features. It’s ideal if you want a bold, big-screen experience, but look elsewhere if you need top-level eSports speed or particularly accurate colours.

The MSI Optix MPG321QRF-QD is a big, bold, and eye-catching gaming display that pairs vibrant colours with RGB LEDs.

Beyond that, the MSI serves up a tempting specification: a 175Hz overclocked refresh rate, 1ms response time and Nvidia G-Sync should satisfy most gamers.

It’s not the cheapest gaming panel on the market, though, with a price of £699 in the UK and $599 in the US. That figure outstrips its rivals, and it means that the MSI Optix MPG321QRF-QD must work hard to impress.

The MSI is immediately impressive. A 32in panel looks vast on most people’s gaming desks, and the sheer size means that most games will look immersive. It’s a bold-looking screen, too, thanks to slim bezels, carbon-fibre and brushed plastic at the rear and a glossy section that’s slashed with RGB LEDs.

MSI’s monitor has impressive practicality too. There’s 100mm of height adjustment alongside 60 degrees of swivel movement, and it can tilt by 25 degrees. It also supports 100mm VESA mounting. The only thing missing is the option to rotate the panel to portrait mode.

At the bottom of stand there’s a handy hole for cables, and behind the bottom-right corner of the panel you’ll find an intuitive joystick that helps navigate an excellent on-screen display. The menus are responsive, and MSI’s OSD has more information than most: you can always see which settings you’re running, and a separate panel explains what will be affected when you change certain attributes.

Physically, there’s lots to like about the MSI. It’s not perfect, though: it’s entirely made from plastic and the back panel is too weak, and you’ll still need a screwdriver to build this display. It’s heavy, too, at 10.2kg.

The rival LG UltraGear 32GP850-B is sturdier, lighter and easier to build than the MSI – and it’s cheaper. But it doesn’t have RGB LED lighting, cable-tidying, or a great OSD.

MSI’s bold design is underpinned with a solid specification. The 32in panel has a 2560 x 1440 resolution, and it uses IPS technology with 10-bit colour and a 1ms response time. The pixel density of 92ppi isn’t particularly high, but games still look great and it allows a wider range of GPUs can drive this panel.

Those core attributes mirror the LG, but the MSI falls behind in the refresh rate stakes. By default the MSI runs at 165Hz, and it’s compatible with AMD FreeSync and Nvidia G-Sync, and it overclocks to 175Hz. That 165Hz refresh rate is great for any single-player game, and both figures are good enough for mainstream esports.

The LG ran at 165Hz by default with a 180Hz overclock, though, so it’s a bit quicker. It’s a tiny difference, but that extra speed could be a dealbreaker if you want to gain every possible advantage in games.

Also bear in mind that you’ll get better specialist performance if you go in different directions: single-player games will look sharper on 4K panels despite lower refresh rates, while keen eSports gamers should find a 240Hz or 360Hz screen, even if that may mean sacrificing resolution.

The MSI Optix MPG321QRF-QD gains advantages in some other surprising areas. Around the rear you’ll find two HDMI 2.0b ports and a DisplayPort 1.4a input alongside a USB-C connection that also handles DisplayPort. The MSI also has three USB 3.2 Gen 1 ports, with two positioned accessibly on the left-hand bezel.

Unusually, the MSI also has a KVM – which means users can control two input devices using one keyboard and mouse. That’s ideal if you want to control any combination of PC, laptop, and games console without switching peripherals. The LG doesn’t have this feature, and it has fewer USB ports.

If you’re a console gamer, though, it may be worth looking elsewhere despite the MSI’s KVM functionality and solid specification. The latest PlayStation and Xbox machines both support 4K gaming at 120Hz, so you’ll need a 4K display with HDMI 2.1.

Not every console game will run at 4K and 120Hz, so it’s not essential. But If you’d like to future-proof yourself, the AOC U28G2XU is a great alternative: it’s smaller than the MSI and LG, but it runs its 4K resolution at 144Hz.

The MSI Optix MPG321QRF-QD virtually punches users in the face with bright colours. The display rendered 99% of the sRGB gamut at a whopping 167.4%, which is massive – it means that the MSI produces every shade required by mainstream games and with huge vibrancy. The display also handled 90.6% of the DCI-P3 gamut, so it’ll handle almost every tone needed by HDR games.

Those bold colours are the MSI’s dominant feature, and the screen performs well elsewhere. Out of the box, its brightness level of 169 nits is modest and the black point of 0.15 nits is decent, and they create a contrast ratio of 1,127:1. Those good figures mean the colours are bolstered by solid depth and nuance.

Out of the box, the MSI Optix MPG321QRF-QD is vibrant, with colours that are so rich that they almost look oversaturated. It might not be ideal if you want photo-realism and muted, gritty tones, but the MSI certainly makes an impression. The panel maintained this performance at its peak SDR brightness of 402 nits.

MSI pairs its striking colours with decent refresh rate performance. At 165Hz there’s no clear ghosting or inverse ghosting and hardly any haloing evident. Mainstream games and esports titles are easily sharp enough to run well, even if the motion is a bit blurry when compared to 240- or 360Hz displays.

Switching up to 175Hz brings a tiny bit more crispness to the fore, and it’s worth using if you want every advantage – although this mode only works over DisplayPort so bear that in mind. There are some options you shouldn’t use, though: MSI’s MPRT Sync setting darkens the display and creates obvious ghosting, and there’s hardly any difference between the Normal, Fast and Fastest response time options.

In several other areas the MSI is decent, but not outstanding. Its Delta E of 4.14 is fine for games, but not good enough for sensitive colour work. And while the panel handles enough of the DCI-P3 gamut to tackle HDR games and media, its modest peak HDR brightness of 600 nits and its lack of sophisticated dimming means it can’t deliver significant or nuanced HDR improvements.

The MSI doesn’t have great uniformity, either, with backlight strength declining by 20% on the left-hand edge. That’s not going to ruin gameplay, but it could certainly be better.

Generally, though, my testing delivers good results. The MSI has better contrast and colour temperature than the LG, while the UltraGear had marginally better colour accuracy and gamut coverage. Neither are great with HDR, and the MSI is slightly behind the LG on refresh rate performance – but differences are negligible.

It makes it pretty easy to draw conclusions. The MSI Optix MPG321QRF-QD is better if you want bolder, brighter colours, while the LG remains superior if you’d prefer a more realistic and muted palette.

The MSI costs £699 in the UK from Overclockers or Amazon and $599 in the US from Amazon, and you’ll find similar prices at loads of large retailers. That makes the MSI pricier than its key rival: the LG UltraGear 32GP850-B costs £469 in the UK and $596 in the US.

If you’re still unsure, head here for our best gaming monitor chart and the best monitors for every budget.

The MSI Optix MPG321QRF-QD isn’t the cheapest gaming monitor around, and it’s not the most accurate – if you want a display to double up in creative workloads, look elsewhere.

Instead, the MSI concentrates on a bold, vibrant gaming experience, and it delivers thanks to punchy colours and good contrast. Elsewhere, it’s got RGB LEDs, impressive and unexpected features and decent connectivity, and the refresh rate to tackle mainstream games.

If you’d like your next gaming display to deliver huge colour and plenty of features, the MSI Optix MPG321QRF-QD is worth consideration – but look elsewhere if you want a more delicate experience.