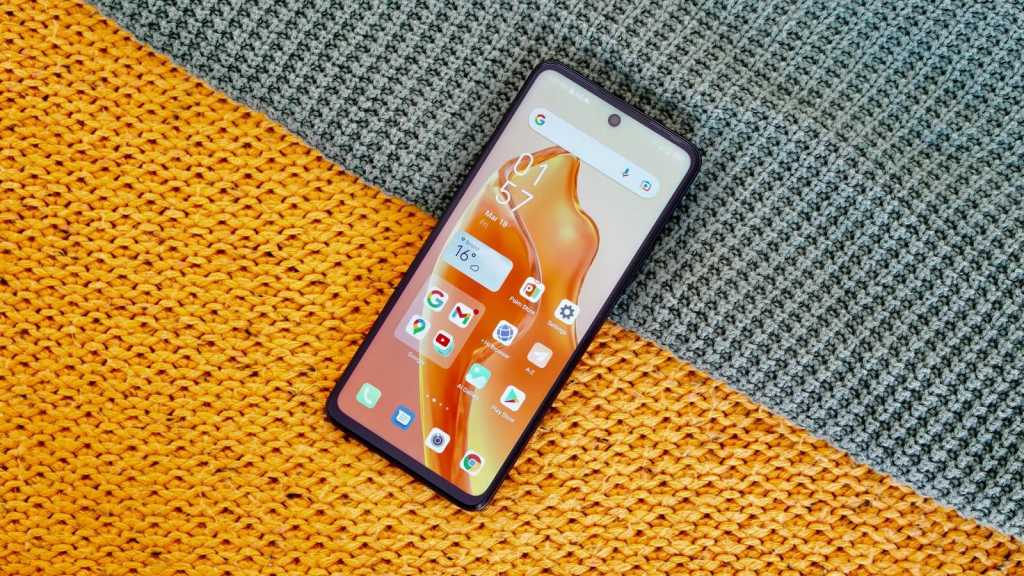 The Infinix Zero 5G is the first 5G phone from the brand and it offers impressive performance for the money. However, an oddly disjointed camera and one of the uglier UIs on the market rule it out from serious consideration.

Hong Kong-based Infinix has been making steady strides towards becoming an established smartphone brand in recent years. Last year’s Infinix Zero X Pro was the most advanced effort yet from the manufacturer, combining a 108Mp camera with a 120Hz AMOLED display to decent effect.

While the pricing appears to be in the same ballpark, the Infinix Zero 5G isn’t quite up to that phone’s level. Rather, it’s an affordable phone with a level of performance, display quality, and camera specs that pitch it closer to the Poco M4 Pros and Redmi Note 11s of this world.

The one notable first here is that this is the company’s 5G debut. Unfortunately, cutting edge connectivity isn’t quite enough to make for a well-rounded budget phone package.

The Infinix Zero 5G doesn’t feel like a particularly premium phone, despite having a fairly large 168.73 x 76.53 x 8.77mm body with a not-inconsiderable weight of 199g.

It’s predominantly made up of shiny plastic, which admittedly proves quite robust, but also turns out to be a magnet for greasy fingerprints. There is, at least, a grippy case included in-box which can help with this.

The design doesn’t follow the pattern set by the Infinix Zero X Pro before it. With its curved blister of a camera module (which Infinix calls a “Uni-Curve Design”), it’s got far more in common with the OnePlus Nord CE 2, which in turn borrowed its looks from the Oppo Find X3 Pro.

It’s quite an attractive look, though as I said, it’s one that quickly looks grubby with use – even in my model’s Cosmic Black shade. Infinix also offers the phone in Skylight Orange and Horizon Blue.

There’s a nice responsive side-mounted fingerprint sensor here, which didn’t offer me any problems throughout my time with the phone. It’s a marked improvement from the Infinix X Pro’s flaky in-display solution too.

You get just a single speaker on the bottom of the phone, which isn’t the best offering even at this end of the market. The Poco M4 Pro and the Redmi Note 11 both give you full stereo sound for similar money. At least there’s a 3.5mm headphone jack on the same edge.

The Infinix Zero 5G packs in a large, sharp and fluid 6.78-inch Full HD+ 120Hz display. However, it’s only an IPS LCD panel, rather than the Zero X Pro’s full AMOLED offering.

This means that it lacks the punchy colours of its older brother, not to mention contemporaries such as the Poco M4 Pro. This seems to be part of the trade-off for 5G at this end of the market. You can have next-gen network connectivity or an OLED display for around the £200 mark, but not both at the same time.

Colour gamut coverage is a solid if unspectacular 96.7% sRGB, 70.9% Adobe RGB and 82% DCI P3. Curiously, there are no alternate display colour modes, unlike with the vast majority of the phone’s Android rivals. As a result, you’re stuck with a default offering that produces a sub-optimal average Delta E of 3, which basically means that the colour output isn’t very accurate.

Infinix quotes a maximum brightness of 500 nits, and I was able to record a peak of 517 nits with auto-brightness turned off. That’s more than enough for indoor conditions but it might not hold up well outdoors, now that the days are starting to get sunnier.

Infinix has packed its latest budget phone with a MediaTek Dimensity 900 system on chip (SoC). This is the same budget processor that powers the Nord CE 2, which sells for £299, in the UK.

Sure enough, the Infinix Zero 5G punches above its weight in pure performance terms, especially with 8GB of RAM on board. Like many 2022 phones, there’s a further 5GB of ‘Extended RAM’ available through the repurposing of some of the phone’s snappy UFS 3.1 internal storage.

An average Geekbench 5 multi-core score of 2,133 pips the likes of the Poco X4 Pro 5G, matches the CE 2 (predictably), and trounces the Redmi Note 11 and Poco M4 Pro 5G. It’s quite an impressive showing for a phone at this price point.

The Infinix Zero 5G’s GPU performance is similarly feisty, with benchmark results in excess of its Helio G96, Dimensity 810, and Snapdragon 695 5G-driven contemporaries. In practical terms, you can expect to run the likes of Genshin Impact on medium with playable, if not super fluid, results.

Besides giving you 128GB of internal storage, the Infinix Zero 5G also gives you a microSDXC slot, for expansion purposes.

I’m a little perplexed at the Infinix Zero 5G’s camera system. It’s a triple-lens set-up, but not in a configuration that most will recognise.

It starts with a perfectly regular 48Mp wide sensor, which is capable of capturing crisp, bright images, given plenty of light. However, I did pick up some ugly artefacts in certain places, such a grainy texture to the blue skies when shooting on a sunny early-Spring day – a sign that Infinix’s algorithms might not be quite up to snuff.

Things get a little weird when we come to the phone’s 13Mp 2x telephoto camera. Such provisions are common further up the market, but not in the £200 (ish) sector, and certainly not at the expense of an ultra-wide.

Yes, the Infinix Zero 5G completely does without an ultra-wide camera. For some time now, the consensus seems to have been that an ultra-wide is preferable to a zoom sensor when budgets are tight, so it’s strange to see a manufacturer going against the grain.

It’s especially odd because the Infinix Zero 5G’s zoomed-in shots aren’t even all that noteworthy here. Don’t get me wrong, they’re perfectly fine, but they’re not massively preferable to the usual budget phone method of cropping in on a pixel-packed main sensor. While you do get more clarity with this method, the fundamental tone is noticeably cooler than the main sensor, and the dynamic range is much less extensive.

Infinix rather ambitiously calls this a “30x 48Mp Zoom Camera System”. Needless to say, you really shouldn’t be thinking about zooming in much beyond the range of that 2x optical zoom.

The third sensor here is a 2Mp “bokeh camera”, or in other words, a depth sensor. It’s pretty superfluous, as such things invariably are.

There’s a dedicated Super Night mode here, as you might expect. While it does well to brighten up such scenes, the lack of OIS and a relatively small sensor results in shots that are a little soft and smudgy. Zoomed night shots are a blurry no-no, meanwhile.

Shots taken during those in-between lighting conditions – indoors during the day, for example – range from surprisingly sharp and punchy to disappointingly noisy. Infinix’s AI assistant works overtime to enhance colours, but it doesn’t always do a good job cleaning up noise, and the camera doesn’t always find focus as well as I would like.

All in all, it’s not a bad budget camera offering. However, it falls short of the comprehensive set-up of the Infinix Zero X Pro before it, not to mention the 108Mp cameras of the Redmi Note 11 Pro and the Poco X4 Pro 5G.

It’s good for a full day of moderate to heavy usage, and might even stretch to two days under light conditions. However, it doesn’t stand up to heavier usage particularly well.

In the PCMark Work 3.0 battery test we subject all of our phones to, which simulates intensive mixed use, the Infinix Zero 5G scored a fairly mediocre 10 hours and 10 minutes.

To place that in some context, OnePlus’ Nord CE 2, with the same processor and a much smaller 4500mAh battery, scored 13 hours 28 minutes. As you can see from our comparative charts, it doesn’t stand up particularly well to its more direct rivals, either.

This seems to be a quirk with Infinix phones, as the Infinix Zero X Pro did even worse in this test.

On the positive side, Infinix packs a 33W wired charger that can get you from 0 to 54% in 30 minutes. Again, that’s something you’ll find offered with many budget rivals from Poco, Realme, and Redmi, but it’s still good to see.

Perhaps the biggest weakness of the Infinix Zero 5G is its software. It runs on Android 11, but it’s the company’s custom XOS 10 UI that really grates.

From ridiculously large app folders that inexplicably take up four times the space of individual app icons, to a frankly horrible notification menu with a bizarre vertical brightness slider, it’s simply not very pleasant to use.

You can customise your home screen through a pre-installed theme store and numerous UI tweaks, but this isn’t at all uncommon at this end of the market.

Also notable is the split notification shade, which brings down your notifications from the top left and control centre widgets from the top right. Even this isn’t totally unique in the Android space, however, with Xiaomi’s MIUI doing something similar with a touch more panache.

Throw in an overabundance of preinstalled third party apps (the Boomplay free music app being one of the more egregious examples); an ugly widget and news screen to the left of the home screen in place of Google Feed; and glaring feature admissions like the aforementioned lack of any alternative display modes, and you have one of the lesser lights of the custom Android UI scene.

Infinix has been rather vague on pricing and launch details for the Infinix Zero 5G, but we’ve seen mention of a starting price of around $269 in the US and €250 in Europe. That works out to around £205 in the UK.

As that suggests, we’re really not sure of a UK launch at the time of writing, but we’ll update this review if we hear any more.

Infinix’s website offers links to retailers who stock the Zero 5G across its primary markets, including South America (namely Colombia), Africa (Ghana and Nigeria to name but two) and parts of Asia (such as Thailand and the Philippines), but a release elsewhere will be trickier to pin down unless the company makes an official push into new regions.

The Infinix Zero 5G brings 5G connectivity and decent performance to the table for a budget price, but the trade-offs place the phone well behind the Pocos, Redmis, and Realmes of this world.

Its design might look fresh from afar, but it feels quite cheap and plasticky in the hand. That cheap feeling extends to the company’s XOS 10 UI as well, which has to be one of the least appealing Android skins currently around.

Props to Infinix for trying a different approach with its camera system, but dropping the ultra-wide entirely for a mediocre zoom lens doesn’t seem to have worked out all that well. Regular shots from the 48Mp main sensor are a little hit and miss, too.