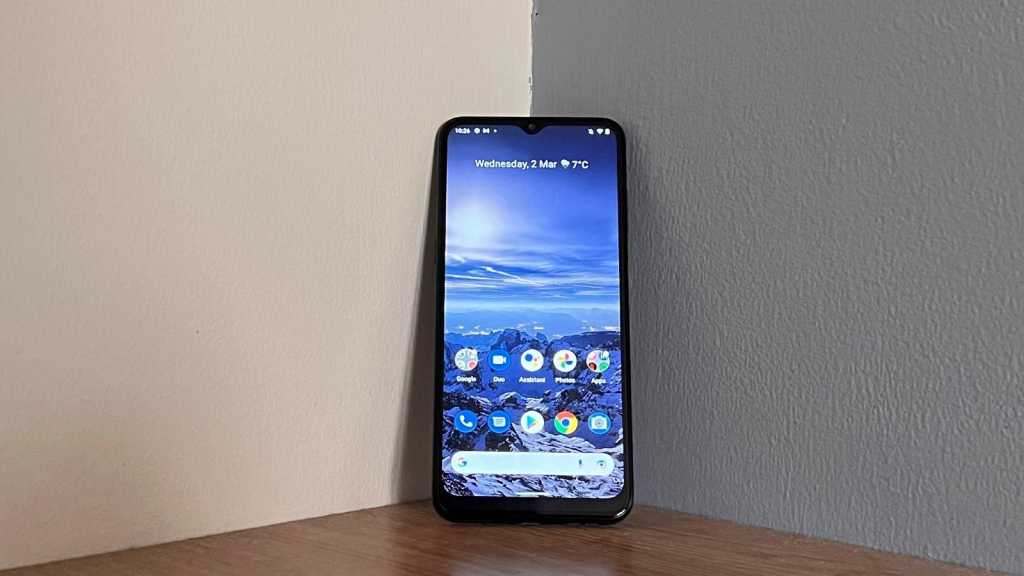 Nokia’s G21 is a solid enough budget phone with a decent amount of performance, but corners have been cut to hit such an impressive price point.

At first blush the Nokia G21 looks like a compelling option, with the promise of excellent battery life and a predominantly stock Android experience. Its chipset, the Unisoc T606, looks to be a fair workhorse, and it does offer a 50Mp lead camera too, but it’s also pushing a resolution of 720p.

That puts it in an awkward spot, especially alongside the likes of the Redmi 10, which bumps up the resolution to a much better 1080p in the same kind of price bracket, so what else can this long-lasting affordable blower bring to the table?

Available in both Nordic Blue and Dusk (our review unit is the former), the Nokia G21 looks as you’d expect a modern affordable smartphone to look, but there are some nice touches.

For one, the back panel has a matte finish to increase grip, and while the construction is plastic, the whole phone feels sturdier than other devices at this price point. On the left, you’ll find a Google Assistant button to match a power button/fingerprint sensor on the right, with the SIM tray and volume rocker opposite each other just above.

There’s a USB-C port at the bottom, with a headphone jack connector at the top. On the back, the camera module includes a standard wide sensor, a macro camera, and a depth sensor. Unlike its predecessor, the G20, you won’t find an ultrawide camera here – but we’ll cover that later. The front sensor is positioned just at the top bezel within the phone’s 6.5-inch display, set into a now rarely-seen dewdrop arrangement.

As big as the screen of the G21 is, it’s immediately clear that compromises have been made to hit its price point. While the display is a large enough canvas for web and social media browsing, it’s 720p resolution makes it feel a little like you’re looking at the display through an additional panel of glass.

It’s clear enough when navigating Android 11, but when you start looking at images they feel a little on the muted side. That’s partially the low resolution but it’s also down to the use of an LCD panel that feels a million miles off of OLED technology. Here’s hoping the trickle-down of those panels arrives on affordable Nokias sooner than later.

On the plus side, the phone boasts a 90Hz refresh rate, meaning thumbing through pages of apps or scrolling your Twitter feed is more responsive – it’s just hard to get excited about. Gamers will likely want to look elsewhere for eye-popping special effects in the likes of League of Legends: Wild Rift, though.

There’s also no HDR on offer here, so there are fewer colours that can be displayed. That’ll not only affect your latest Netflix binge, but can also mean a lack of accuracy in photos taken, too.

The Unisoc T606 is working with 4GB of RAM, and in our testing that means you can expect solid results. If you’re using the Nokia G21 for email, scrolling social feeds and browsing a few webpages, you’ll be pretty pleased with the phone handles itself.

In fact, while its single-core scores from Geekbench 5 are nothing to be too excited about, in multi-core it ever so slightly trumps the similarly priced Redmi 10.

As with the Redmi, that means graphically intensive games are almost out of the question. Sure, you can run the likes of PUBG Mobile, but you can expect to find plenty of dropped frames and texture pop-in.

The good news is that the Nokia G21 is more than happy to play nicely with productivity apps like Google Docs or Sheets. I was able to flick between apps with little to no slowdown, although I did encounter a bizarre crash when trying to reorient a photo I’d taken.

Still, there’s a lot to like with what’s under the proverbial hood here, and while 64GB of included storage is likely to be plenty for many, there’s an SD card slot, too – so you can add up to an additional 512GB of storage in an instant.

Perhaps no part of the G21 signifies its “monkey paw” identity than in its camera setup. It offers a big, 50Mp wide sensor and a macro camera, but lacks the ultrawide of its predecessor, the G20. We’d wager many would rather have an ultrawide than the macro used here, but in terms of what is on offer, the results are a little mixed.

Nokia is touting AI imaging (it’s even on the box), and it definitely has its moments. In Night Mode, the same shot looks noticeably sharper, for example. In daylight though, images still lack detail and vibrancy, with a muted palette that feels bland. Portrait mode is included, but the natural bokeh effect feels inconsequential because of how dulled foreground colours are.

Another thing Nokia is keen to impress upon prospective buyers is the battery life of the G21, and its right to do so – although your mileage will vary. We were able to eke out just shy of three days with normal use, but our PCMark Work 3.0 test offered up some differing results, with readings of around 12 and a half hours and 11 and a half hours of screen on time.

That’s actually less than the Redmi 10, despite Nokia’s claims to the contrary. Still, real-world usage trumps these bespoke tests, so we’re confident in the manufacturer here. As you can imagine, it’ll all depend on how often you’re using the device, but the 5050mAh battery paired wit less-demanding hardware like tat 720p display ensures plenty of longevity.

While 18W fast-charging is supported, a compatible charger isn’t in the box. That’s a shame, because after 15 minutes we were only able to get the sizeable battery to 10% charge, with 24% after half an hour. Still, USB-C chargers are pretty universal these days, so you may be able to juice the G21 up faster without having to fork out for an additional power adapter.

The G21 runs on Android 11, with Android 12 being the latest version currently available. Google update cycles can be a little hard to gauge, but Nokia is promising two years of OS upgrades – meaning it should be covered up to Android 13.

The company also promises twice as many security upgrades as the competition, with 36 the magic number listed in the small print.

As far as preinstalled apps, there are a few but they’re not the biggest offenders. You’ll find Spotify preinstalled, as well as LinkedIn and ExpressVPN – the latter of which comes with a free trial for 30 days.

Beyond that, we’ve time and again commended the Nokia Android experience, for its uncluttered and lightweight approach.

Depending on the market, the Nokia G21 comes with 4GB of RAM and either 64GB (i.e. UK and France) or 128GB (i.e. Spain and Germany) of storage, in the two colourways we mentioned earlier. Availablility in markets like the US and India doesn’t look to be on the cards as yet.

It’s ready to buy now and retails at £149.99 in the UK and from €189 in Europe (although double the storage for a similar price in Spain and Germany makes for better value in those markets). You can buy the G21 from Nokia directly ( UK, France, Spain, Germany), as well as the likes of Amazon, Argos and Very.

Xiaomi’s Redmi 10 is the most obvious alternative but affordable offerings like the Realme 8 and Motorola’s Moto G31 might also fit the bill if you’d rather a nicer design or display respectively, for around a similar price.

Check out our selection of the best budget phones available right now, for a wider host of alternatives too.

With three-day battery life, a balanced processor, and a big screen, the Nokia G21 feels like a solid smartphone on the budget end – but it won’t excite.

A restrictive 720p resolution and a camera that’s got plenty of megapixels but not a lot to show for it, however, render it a competent work phone that you won’t readily be reaching for after the day is done.