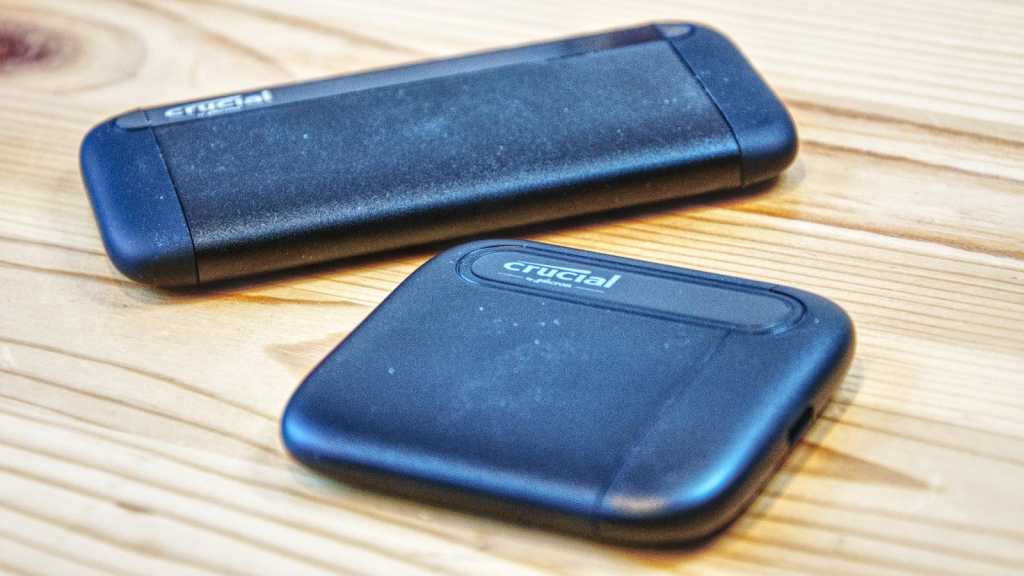 With under the skin changes, Crucial has made the X6 even better value than it already was. The X6 isn’t still isn’t as spritely as its X8 brother but is now much closer in performance, less than half the weight and marginally cheaper.

While not expensive by portable SSD standards, the Crucial X8 was undercut by some competitor products that used cheaper SATA-based technology. These weren’t as fast, but for many in the market for a portable SSD, they were quick enough.

Crucial responded in early 2021 with the X6, a portable SSD that didn’t have the headline 1,000MB/s performance of the X8 but was a good bit cheaper.

And, now a year on, I’m reviewing the X6 because the path of this story has subtly changed.

I never reviewed the Crucial X6 when it first launched in 2021, but glad I eventually got to it.

While having some of the styling cues of its X8 big brother, the X6 is essentially a lower-cost version that is smaller and lighter.

Where the X8 is constructed from a thick metal tube, the outside of the X6 is mostly plastic. Undoubtedly less durable, although it is still rated for a 2m drop onto a hard surface, and has the same three-year warranty as the X8.

By not using a metallic outer shell, the designers also reduced the weight of the 2TB model from 140g on the X8 to only 40g on the X6. And, that reduction in mass probably helps with surviving the drop test.

Another difference is that X8 came with a USB-C cable with a USB-A adapter, whereas the X6 comes with only USB-C on the device and the host end. Adapters are very inexpensive, but Crucial decided that the cost of that minor item would be borne by the purchasers.

On Amazon, though, you can choose whether to get the drive with an included adapter or not.

What this design also lacks is a light to signal activity, and the SSD has no hardware encryption either.

From the information provided, the heart of the X6 is Crucial 96L QLC NAND wired to a Silicon Motion SM2259XT NAND controller and an ASMedia ASM235CM USB interface. The ASMedia chip is USB 3.2 Gen 2 capable, but it doesn’t support the higher performance Gen 2×2 mode.

If none of this sounds especially exciting or innovative, then stick with me because there is a plot twist coming up that wasn’t expected.

When researching a product like the X6, my usual process involves downloading all the appropriate documents and images from the makers, often even before the review sample reaches me.

Included in this supporting material were box artwork and a brochure. These revealed a curious performance twist that had made the 4TB version of the X6 much quicker than the other capacities.

Researching back, I noticed that when the X6 original launched, it came only in 1TB and 2TB options, with the 500GB and 4TB options arriving a couple of months later.

According to the product flyer, the 500GB, 1TB and 2TB drives were all rated for a maximum speed of 540MB/s, whereas the flagship 4TB model offered a much more impressive 800MB/s.

When the 2TB sample arrived, boldly printed on the box was “Up to 800MB/s”, confusingly.

To be honest, I wondered if the Crucial marketing department had taken the speed of the 4TB model and over-enthusiastically plastered it on every box.

But the truth is stranger. Something I discovered when testing the 2TB X6. A drive that can now read and write at more than 800MB/s at the majority of capacities.

In the CrystalDiskMark 8.0.4 benchmark, it achieved an average of 834MB/s reads and 820MB/s writes with the default profile and 32GiB files. This was backed up by AJA System test that scored 836MB/s reads, and 837MB/s writes.

While the X8 was still faster than this, closer to the 1,000MB/s level, this is a significant improvement over the 540MB/s level that was originally quoted for this product.

To be clear, the 2TB drive I tested has precisely the same part number, CT2000X6SSD9, as the launch version, but they’re patently not the same.

In response to my enquiry on this subject, Crucial replied to say:

“Crucial is committed to delivering great value to consumers in the portable SSD segment. Since launching the X6 in 2020, we have been able to enhance the value we bring to the market by taking advantage of newer technologies that result in faster performance – a read speed of up to 800MB/s in most capacities.”

“We are in the process of updating our collateral and packaging to reflect these higher speeds, so we apologize for any confusion caused by this midstream performance transition. By the end of this transition, both the 2TB and the 1TB products will also have a marketed read speed of up to 800MB/s. The published spec on the 500GB will remain at the up to 540MB/s read speed for now.”

So there we have it, the packaging is not wrong. The X6 is reborn, with the exception of the 500GB model, a good bit faster than it first was and now much closer in performance to the X8.

You can buy the Crucial X6 from the official store as well as retailers like Amazon, Ebuyer, Box and Scan where prices are often lower.

All these are marginally faster, equalling the X8 other than the SanDisk, which is markedly slower at just 520MB/s.

In terms of value for money, the X6 is difficult to beat but you can check more options in our best portable SSD chart.

Somehow our choice to review the Crucial X6 now looks like a masterstroke when it is entirely coincidental.

The recent changes to this product have elevated it to a level where for some users, it might be preferable to the excellent X8 design. The X6 now offers most of the performance cream of the X8, but at a lower cost and in a more lightweight package.

I’d still like to see an activity LED and hardware encryption come to the X6, but at this price for a portable SSD, this is an excellent purchase.

The only mistake Crucial has made is that the product number remains unchanged, making it more difficult for buyers to be certain that they’re buying the latest X6 and not the older stock.

Make sure that the box says 800MB/s, and if it doesn’t, then find a supplier that can confirm this to you before buying.