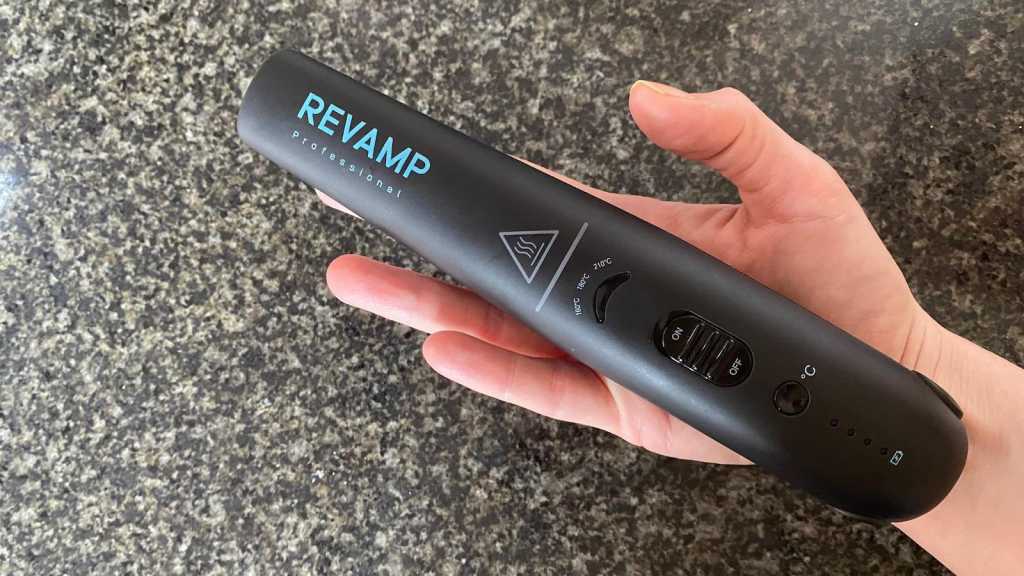 This cordless straightener is the ideal travel accessory. But its small plates and dissipating heat mean that you may want another straightener at home, especially if you have longer or thicker hair.

Cordless straighteners give you more freedom when styling your hair. Take them into the bathroom, your bedroom, the sitting room – wherever there’s a mirror and good light. You don’t need to stand near a socket and you can move around without yanking the plug out of the wall or getting tangled up in the cord.

They’re becoming more widely available and affordable. We’ve previously looked at the Dyson Corrale, which is beautifully made – but heavy and pricey.

GHD now also makes a cordless straightener. It’s lighter and less expensive than the Corrale – but at £299, still nowhere near budget friendly.

In this review, we’re looking at Revamp’s (not economically named) Progloss Liberate Cordless Ceramic Compact Hair Straightener. It’s light and ideal for travelling. And, at just under £100, it’s the most wallet-friendly option we’ve seen.

Revamp makes more than one model of cordless straightener. This is the compact version. It’s only 20.5cm long, and around 4cm by 4cm at its widest point. It’s barely longer than my hand.

It’s gently rounded and tapers towards the tip. The shape makes it pleasant to hold, as does its matt silicone finish. And it’s incredibly light. It weighs just 243g, which is less than an empty mug.

In the box, you’ll get the straightener itself, a charger with removable UK and EU plug adapters, and a heat-resistant travel pouch. The pouch is oddly glittery and it’s the only thing about the design of the device itself or the accessories that I’m not entirely on board with. However, its finish does help you to locate it in a bag. 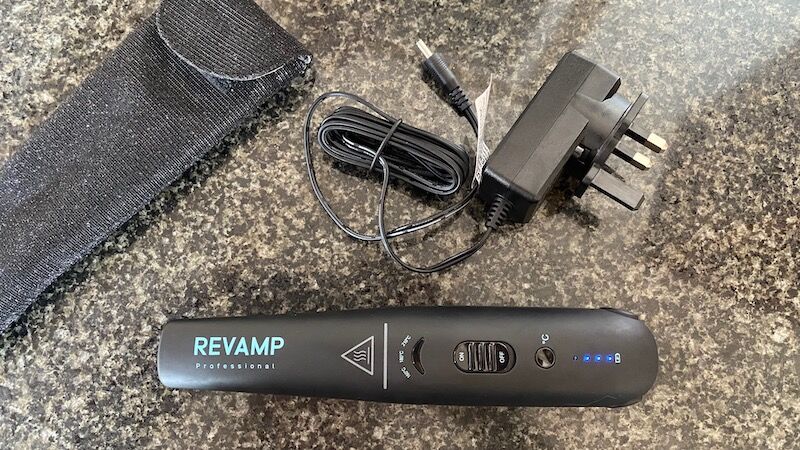 Even though it has a compact design, Revamp has packed in all the features you could want. Switch the straightener on and the battery life is immediately displayed. The battery percentage – 25%, 50%, 75% or 100% – is indicated by how many of the four pinprick blue lights are illuminated.

There’s a large on/off switch. Slide it forward and you can change the temperature to one of three settings: 160°C; 180°C; or 210°C. There’s a display light that flashes next to the temperature you’ve chosen and swaps to an unblinking light when it’s reached. 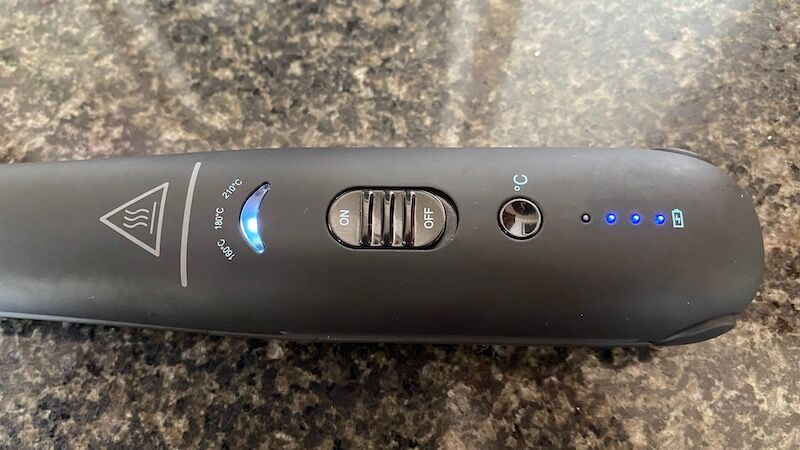 At the end of the straightener, there’s a switch to lock the plates for safety. Its other safety feature is an automatic shutoff function: it’ll switch itself off after half an hour – unless, of course, it’s already run out of juice by then. 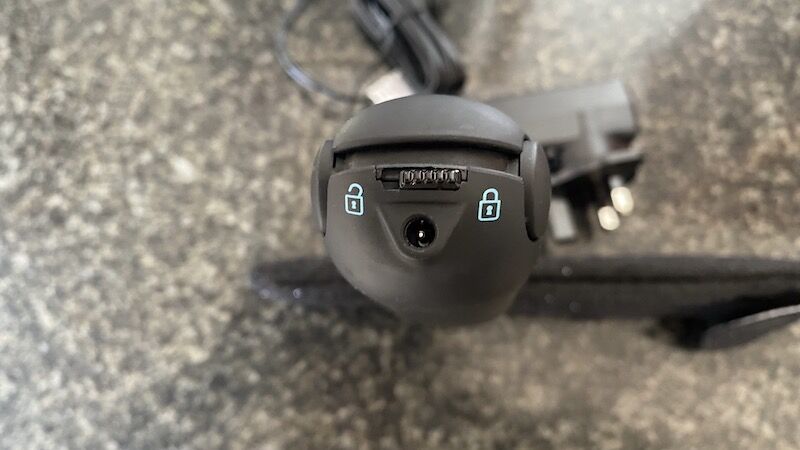 Charging and usage time is key to how handy a cordless appliance can be. The Revamp Compact straightener charges quickly from an empty battery: it takes just three hours. You can see the battery indicator lights illuminating one by one as it does so.

After you switch it on and choose the temperature setting, it heats up in about 1 minute 20 seconds.

Like any rechargeable device, this does mean there’s a bit of planning involved. If you want to take it out with you (without its charger), you’ll need to charge it in advance. Still, it’s well worth your time as it’s a fraction of the size and weight of a traditional straightener, and there’s no bulky cord.

Once charged, Revamp estimates that you’ll get around half an hour of use from the lithium-ion battery. This seemed accurate from my time testing it.

I charged the straightener, stuck it in a bag and straightened my hair between work and dinner. It would also be handy to take to the gym. I was able to use it about three times between charges – but that will vary depending on your hair type and whether you’re using it to smooth and style or if you want to create ramrod-straight hair. 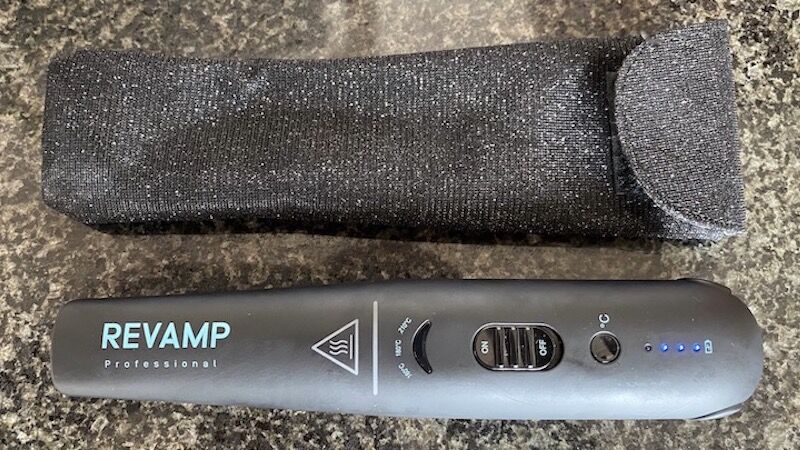 Revamp suggests that people with very thick or curly hair will need to use the highest temperature setting, although the brand advises starting on the lowest where possible to protect your hair.

There are a number of features to maximise the straightening effect and minimise heat damage to your hair.

The first is its ionic technology. What this means is that the straightener emits negatively charged ions. This should theoretically create better results without the need for as much damaging heat.

The Liberate also has floating plates – that is to say, there’s some give to them, which helps them to grip your hair and straighten it evenly, so you don’t have to go over it more than once.

Like the other styling tools in Revamp’s Progloss range, it’s infused with argan, keratin and coconut oil to shine your hair as you straighten. It’s hard to say how effective this is. And, if it is effective, how long it’ll last before the oils wear off.

However, the instruction booklet warns you not to scratch the plates as this may damage the coating, so taking care of the device may help with its longevity.

I found it to straighten hair effectively, but it was certainly not the most powerful hair straightener I’ve ever used. I have shoulder-length, wavy hair and it may be less effective on very thick or curly hair.

Certainly, the petite size of its plates would make straightening very long hair a chore. Its strength is as a travel-friendly way to smooth and style hair. If you have very thick or long hair, this would be a great styling tool to keep in your bag but you’ll need a more powerful option for home.

How you use it may also make a difference. I found that heat dissipated from the plates if they were left open for too long while styling. I had better results when I paused and locked the plates together for a short while.

The Revamp Progloss Liberate Cordless Ceramic Compact Hair Straightener ST-1700 is available for £99.99 or £100 from a number of retailers, including Amazon, Very and Revamp itself. But the best price we can currently find it for is £79.99 from Boots, although it’s out of stock at the time of writing.

Revamp also makes another cordless straightener. It’s slightly cheaper at £79.99 from Amazon but it’s not as compact or travel-friendly.

This teeny tiny straightener is feature-packed and well designed. Its strengths are its portability and battery life. But its small plates and dissipating heat mean it’s best viewed as a travel accessory, not your one and only straightener, especially if you have long, thick hair.

For more hair styling options, have a look at our round-ups of the best hair straighteners and the best hair dryers we’ve tested.