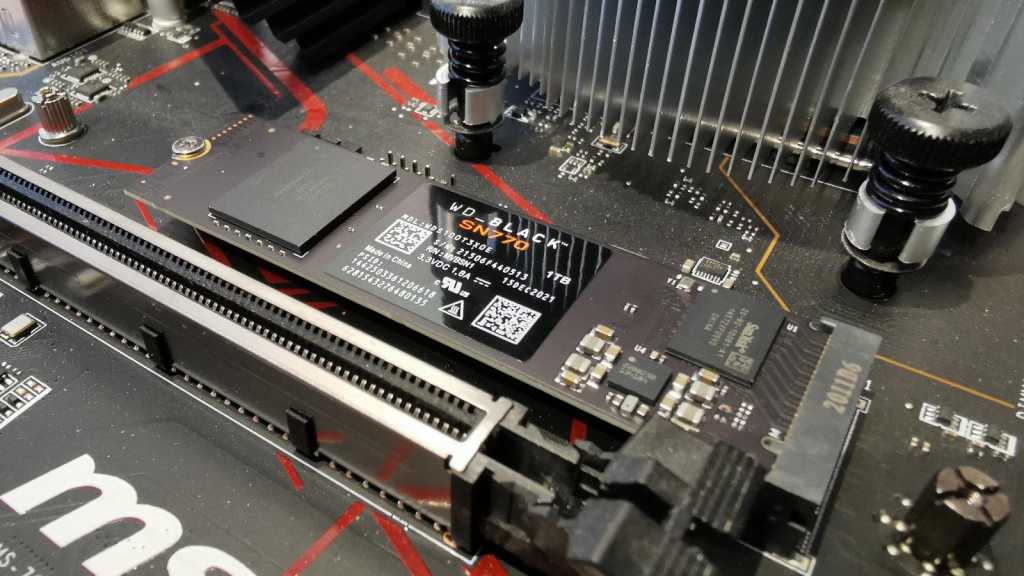 Unless you own a PS5, the WD Black SN770 provides a natural progression from Gen 3 NVMe without the high cost associated with top-end Gen 4 drives. For those building a budget gaming rig, the SN770 is an excellent choice.

While many people are still using SATA SSDs, and a few even conventional hard drives, most desktop PCs and laptops are now using PCIe NVMe technology.

It offers the smallest form factor, highest speeds and greater power efficiency, and the price premium isn’t as significant as it once was. To differentiate their products, SSD makers have embraced the new Gen 4 standard for these devices, creating more price strata.

That’s close to the theoretical limit for this interface and perfect for those that want to get the very best performance from an AMD Threadripper or Intel 12th-gen platform.

But not everyone wants to pay for these ultimate performers, and by turning down the flame a little, some makers are offering serviceable solutions that more can afford.

The new WD Black SN770 is one of these options, promising 5,000MB/s read speeds for less money per GB than the more exotic end of the market. Is this worth considering, or should you keep your cash for either a bigger Gen 3 drive or a smaller high-performance product?

As 2280 NVMe drives go, the form of SN770 is as generic as they come. On the top side is the NAND package on the left and the controller is on the right with a few discrete parts surrounding it.

The underside has no visible components, this design comes with no heatsink, and WD has no options where one is included.

The NVMe fashion these days is to not use DRAM to smooth transfers but instead use either SLC caching and, in the case of the SN770, RAM in the host PC as a buffer.

Not having a DRAM cache reduces cost but impacts on performance, though the extent of this speed reduction is dependent on the amount of drive space left to be dynamically used as an SLC cache and power of the host systems memory subsystem.

The SN770 isn’t the first NVMe drive I’ve seen with this configuration from Western Digital. It previously used this approach on the SN570, among other designs.

One snag with the host memory buffer (HMB) approach is that the Sony PS5 doesn’t support that technology. That would be more of a problem if Western Digital were selling the SN770 for this purpose, but it is also below the 5,500MB/s low watermark for third-party modules on the PS5 anyway.

When Western Digital sent my review sample, it was specifically mentioned not to test it in a PS5, and while it might work in some way, this isn’t something I’d recommend you do.

What I would advocate for all PC deployments is a third-party heat spreader. While I didn’t encounter thermal throttling in my tests, avoiding any excessive build-up of heat is likely to extend the life of the drive and enable it to operate at the best possible speeds.

Depending on how you intend to use an SSDs, endurance is either something you are concerned about or not. For those that hammer their drive relentlessly, the SN770 is an average performer in terms of how much writing it can handle.

At comparable capacities, the TBW is less than the Crucial MP600 LPX and Kingston KC3000, but taking the 1TB drive as an example, it is on par with the Crucial P5 Plus, Samsung SSD 980 Pro and WD Black SN850.

My advice is unchanged on this subject, in that if TBW (Total Bytes Written) is potentially an issue for you, then buy the largest capacity drives to better distribute the workload between NAND cells.

An important point on this subject is that significant wear only occurs when random writes happen, with much less with sequential and reading generally. Therefore, if you write video files as an example, that won’t impart the same amount of wear to NAND cells as random writes of small files.

TBW is typically calculated as being for the worst-case 4K random writes, and that’s not how most users utilise these drives, making the real TBW for most users much, much higher.

For a typical user that doesn’t write 500GB of random data every day, TBW isn’t likely to ever be a factor, even on the smaller capacity SN770. And, to underline its confidence, Western Digital offers a five-year warranty if the drive doesn’t exceed quoted TBW over the entire range.

The performance on offer in the SN770 is dictated, to a degree, by the capacity chosen.

If you need the best speed, I’d probably avoid the 250GB model. The makers quoted speed has it rated at 4,000MB/s sequential reads, and just 2,000MB/s writes.

For unknown reasons, the fastest SN770 is the 1TB model quoted with 4,900MB/s for sequential writes. My review sample was the 1TB drive, and via testing, I can confirm these numbers through a slew of synthetic tests.

But for full transparency, one oddity with this SSD over others I’ve tested is that this one has ‘Game Mode’. A special configuration that you can activate using the WD Dashboard application on these drives.

I did some tests in Game Mode, and it didn’t offer any dramatic improvement over the normal operations of the drives in the benchmarks I use. That’s to be expected as Game Mode, according to Western Digital, is meant to enhance performance with game workloads, and synthetic benchmarks don’t have the same workload.

For this reason, all the benchmarks I’ll be mentioning have been done with Game Mode disabled.

Using CrystalDiskMark 8.0.4, I saw read speeds of 5,189MB/s and write of 4,909MB/s using the default profile and 32GiB file size. In a Real-World profile, the write speed was the same but read speed declined to 5,086MB/s.

Running ATTO backed up the previous analysis with peak read performance of 4.19GB/s and writing at 4.62GB/s. Therefore, the headline scores aren’t exceptional. It’s beaten by the Crucial P5 Plus, but the scores are better than a Gen 3 drive of any variety can deliver.

If the SN770 has a weakness, it is that once the local RAM buffer and SLC cache are saturated, performance tends to fall off a cliff when the true speed of the NAND is exposed.

In my testing, this resulted in painful write speeds of around 550MB/s. But on a fresh drive, it took some considerable write operation to reach this point, and most users would be unlikely to encounter this decline until the drive was more heavily occupied.

Typically SLC cache use of space takes three times that of regular storage, so if you have 300GB of space left, the SLC cache will work well until you have written 100GB. Once the write operation is complete, the cache written space is converted into regular use, and the potential cache space is recovered.

This recovery happens reasonably quickly, and the drive is ready to accept another large write afterwards.

As the SN770 was never going to be the fastest Gen4 SSD, it needed a good reason to buy, and that’s the price.

In short, this may be the cheapest Gen 4 branded drive by some margin. However, I need to point out that some of the competitor devices support hardware encryption and have greater sustained performance for those that write large volumes of data.

Overall, the SN770 represent good value and is undoubtedly a better option than purchasing an end-of-line Gen3 design.

If you’re not sure which SSD to buy, check our best SSDs chart with a range of options and buying advice.

The first important thing to understand about the SN770 is that it replaces the ageing SN750, a Gen 3 drive that peaked at reading speeds of 3,400MB/s and writes of 3,100MB/s.

In comparison, the SN770 is a dramatically better proposition, even for those still using Gen 3 slots than the SN750. It offers much better power efficiency, making it useful for laptop users.

The only disappointment is that the SN750 had a 4TB model, and that option is missing from the SN770 range. WD padded out the models with a 250GB option of dubious value that, according to the official numbers, isn’t worth considering.

While the 500GB model is less kneecapped, it’s the 1- and 2TB versions that bask in the performance and value sunshine, and I’d recommend those.

Where this drive looks less enticing is for those running mission-critical exercises where performance is everything. It isn’t the quickest Gen 4 drive, and it can’t sustain its writing speeds over the long haul.

But, in short sprints, like when games are launched, it’s fine. The only mistake that Western Digital made was to allow the performance to drop below the acceptable level to be PS5 approved, ruling out an entire section of possible buyers.

For PC gamers, the WD Black SN770 is worth considering for those working to a budget. It delivers sufficient speed to launch titles quickly, but it costs about 40% less than the flagship branded designs. Even if you factor buying a third-party heat spreader, it still represents a good deal.

If you want the fastest drive possible, then you won’t get it at this price, but if you just want an affordable workhorse gaming SSD, then the SN770 is a credible choice.