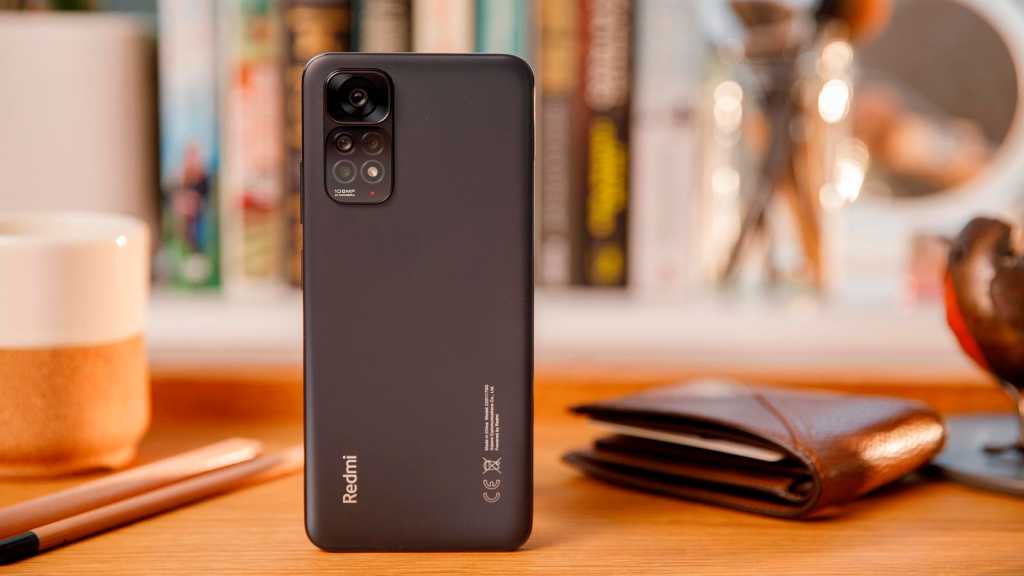 Another fine budget phone option from Xiaomi, where available. The Redmi Note 11S combines a tidy design and display with an impressive main camera and a capable – if somewhat inefficient – processor.

Redmi has fast become a go-to name for anyone looking for value in their next smartphone. The Xiaomi-owned marque’s phones tend to retail for around the £200 mark and often punch above their weight.

It’s priced accordingly, though its global presence will be limited compared to its brothers. There are no plans to launch it in the UK, though importing phones is a lot easier than it used to be.

The real question is, does the Redmi Note 11S represent the sweet spot in this compelling budget phone range? Let’s find out.

The Redmi Note 11S really does look and feel an awful lot like the Redmi Note 11. Held side by side, they’re practically indistinguishable, with the same plain-but-classy design language and the same layout of all of its buttons and components.

There’s the same matte plastic back and the same flat metal-effect frame. It also sports the exact same basic dimensions of 159.9 x 73.9 x 8.1mm, the same weight of 179g, and the same IP53 dust and water resistance rating.

You get the same bonus combo of a 3.5mm headphone jack and an IR blaster on the top edge of the phone too. That latter component allows you to control your TV or your stereo using Xiaomi’s Mi Remote app, which isn’t something you can claim of many phones these days.

Another welcome inclusion is a pair of stereo speakers. Such a feature didn’t even appear in the £300 OnePlus Nord CE 2 recently, so it shouldn’t be taken for granted at this end of the market.

Just about the only design element that gives the game away here is the Redmi Note 11S’s camera module. It’s shaped very similarly when viewed head-on, but where the main sensor sits flush with the rest of the camera module on the Note 11, it protrudes further on the Note 11S.

That’s thanks to one of the two key differentiating factors here being the inclusion of a superior 108Mp camera, which it shares with the range-topping Note 11 Pro.

It’s not exactly a stand-out component, but it exudes an all-round sense of competence in all areas. And that’s all you really need at this end of the market – it’s certainly better than getting a more basic LCD screen.

Vivid isn’t the most consistent or accurate display mode, however, as it really over-saturates those colours and adjusts them according to the content being player. With the more natural Standard mode activated, I recorded a superior Delta E of 1.37 versus 3.35 in Vivid mode (the closer to, or under, 1 the better).

Like the regular Note 11, the 11S has a refresh rate of 90Hz (up from the standard 60Hz found on many phones). It’s becoming more common but isn’t a given on budget phones so is nice to see, providing a smoother experience, especially for scrolling.

It’s a much older and less efficient chip than both of those alternatives, as it’s built to an old 12nm standard rather than the 6nm of the two Snapdragons.

In sheer performance terms, however, the Helio G96 is quite a bit faster than the Note 11’s Snapdragon 680. Isolating the CPU, I recorded an average Geekbench 5 multi-core score of 1875 compared to the Note 11’s 1701.

For machine learning, meanwhile, a Geekbench ML score of 358 is way higher than the Note 11’s 195.

It’s a similar story with our GPU-focused GFXBench tests, where the Redmi Note 11S scores higher frame rates right across the board. It’s less clear cut between the Redmi Note 11S and the Poco M4 Pro 5G review with its Dimensity 810 5G, with the Redmi winning on CPU but losing on GPU.

The Redmi Note 11S offers either 6 or 8GB RAM, which is a tad higher than the Note 11’s 4 or 6GB and unusually high for a budget phone.

In storage terms, the Note 11S gives you either 64- or 128GB, like its close brother. With many phones at this price now defaulting to 128GB, this feels like an area where Xiaomi has worked some room in the budget for the phone’s impressive camera.

Another notable omission is 5G. Like the plain Redmi Note 11, you’ll have to make do with 4G connectivity here so look elsewhere if that’s an issue.

Regardless, the headliner here is undoubtedly a 108Mp main camera, which features a large (for a budget phone at least) 1/1.52in image sensor.

You don’t get full 108Mp shots as standard, of course. Xiaomi uses 9-in–1 pixel binning to create sharper, more balanced 12Mp snaps. This is backed by an 8Mp ultra-wide with a 118-degree viewing angle, a 2Mp macro camera, and of course that 2Mp depth sensor.

Image quality here is decent, with plenty of detail in good lighting and a reasonable amount of dynamic range. Xiaomi doesn’t activate its AI scene selector by default and that’s generally a good thing. While it served to brighten up certain scenes in my testing, it also tended to overexpose bright background elements.

Night mode works well to brighten scenes up. That large sensor helps here, of course, and it’s a big step up from the Note 11 in low lighting conditions. However, the lack of OIS holds it back from matching more expensive phones.

The ultra-wide camera does a reasonable job, but it obviously can’t match that large, pixel-packed main sensor for detail or dynamic range.

Any zoomed shots will be 2x crops from the main sensor, as there’s no dedicated telephoto lens. As such things go, the results aren’t too bad thanks to the sheer pixel count – but you’re not going to want to rely on this too much.

Nor will you wish to shoot too much video on the Redmi Note 11S. It maxes out at 1080p/30fps, which feels woefully undercooked – and of course, doesn’t even get the help of OIS.

Like its brothers, the Redmi Note 11S packs a 5000mAh battery, which should prove ample for getting you through a full day of moderate usage.

It does charge reasonably quickly though. Redmi bundles in a 33W wired charger, which got me from 0 to 60% in 30 minutes. You can expect to hit 100% within the hour so it’s fairly fast.

The Redmi Note 11S features MIUI 13 running on top of Android 11 (not the most recent version), and it offers no great surprises or innovations.

I suspect that few reviewers would name Xiaomi’s MIUI as their favourite Android skin. There’s a certain crudeness to its chunky app icons and full-page app download notifications.

The strength of Xiaomi’s software remains in its personalisation potential. The Themes app, in particular, grants a vast range of custom themed skins that grant your home screen and menus with a completely new and cohesive look.

As an occasional iPhone user, I also appreciate the default provision of a split notification shade, with notifications from the top left and control centre toggles from the right. These can be merged if you prefer.

There are a few too many pre-installed apps, though at least the likes of Amazon Shopping, TikTok, Spotify, LinkedIn, and WPS Office are stashed in their own ‘More apps’ folder, and thus easily ignored or deleted.

The Redmi Note 11S isn’t going to be sold in the UK, so we haven’t been given UK pricing. What we do have is official global prices in US dollars, even though the phone won’t launch there either.

If you do want to import it, AliExpress has the phone for, at the time of writing, between £168 and £202. Alternatively, you can opt for lesser-known retailers including Techinthebasket, GadgetWard and Miagadget though we have no experience with them.

It seem the Redmi 11S is primarily focused on the Indian market as that’s where you can buy the phone from the official Mi Store starting at ₹19,999 in terms of RRP.

Its availability is set to be more limited than either of its brothers, which makes sense, as it doesn’t really do enough to distinguish itself from the pack. Where available, however, it’s a classy option for anyone looking for sharp photos at a budget price.

The use of a Mediatek Helio G96 chip comes with mixed blessings. On the one hand, its raw performance is stronger than that of the plain Note 11. On the other hand, the older technology at its core results in inferior battery life when you push it a little harder.

Where available, the Redmi Note 11S serves as an effective highlights package of the entire Note 11 range and a very good budget option for those seeking a little extra photographic pop. As long as you don’t need 5G.