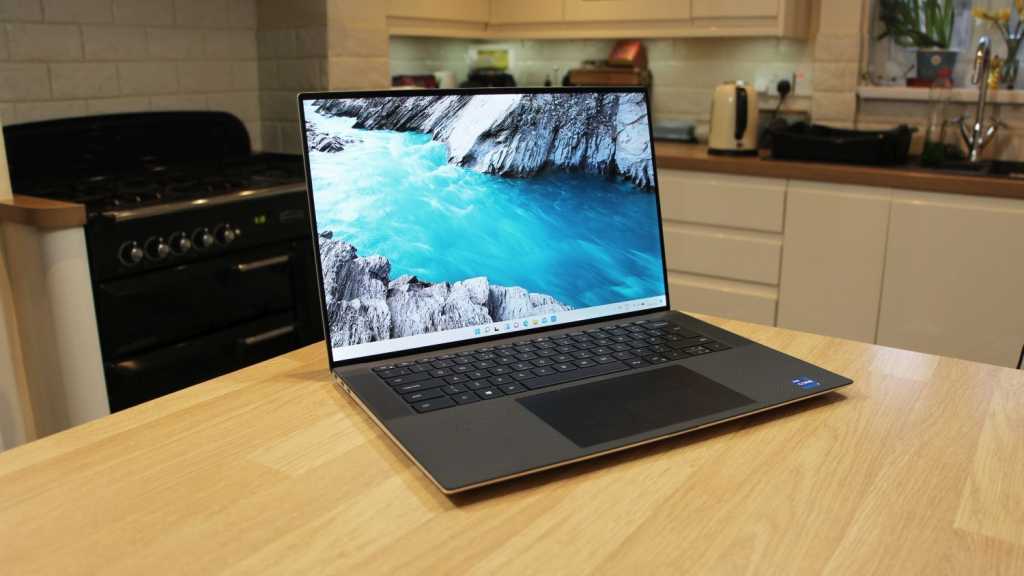 The Dell XPS 15 looks and feels fantastic, it’s powerful, and it has an excellent keyboard. Its screen is bold and vibrant, the speakers are top-notch, and its battery life will be good enough for a day of work in most situations too. There’s little left to ask for despite the asking price.

The Dell XPS 15 is the latest addition to the firm’s luxury work range of laptops, and it’s been slimmed down and improved with some sleeker design and a new OLED screen option.

On the inside, the XPS still relies on muscular Intel 11th-gen silicon and discrete Nvidia graphics, and on the outside, it looks and feels as good as ever.

Since the name of the laptop stays the same with each new edition, this is the 9510 model which arrived late in 2021 and is the most recent XPS 15.

Not much has changed about the XPS 15’s broad design, but this remains one of the best-looking laptops around. The base and lid are aluminium, the keyboard deck is carbon fibre, and the XPS 15 is available in two colour schemes – the silver and black I’ve covered or a white finish.

Dell’s new machine weighs between 1.8kg and 1.96kg, depending on the specification, and it’s 18mm thick. Those are impressive figures for a powerful 15.6in notebook. Despite that, it’s easily one of the strongest notebooks in this category and is ideal for life on the road.

You can find plenty of lighter laptops but rarely will they match up to the specs and build on offer with the XPS 15.

Above the XPS 15’s display there’s a 720p webcam that supports Windows Hello, and the power button includes a fingerprint reader – so you’re well-set for biometrics.

In some other areas, the design is more restrictive. The left-hand edge has two Thunderbolt 4 ports, and the right-hand side has a USB 3.2 Gen 2 connector and (a rare) SD card reader, but that’s it for ports – if you want HDMI or a full-size USB you’ll need to use the included adapter, and there’s no wired internet.

This is a shame, particularly the USB-A port, considering the 18mm dimension of the laptop but a move to only USB-C is very common now.

Dell XPS machines usually have satisfying keyboards, and the latest XPS 15 doesn’t buck that trend. Its buttons are fast, crisp, and satisfying, with enough travel to feel solid and a reassuringly firm base.

The keys are easily good enough to handle a day of typing, and the lack of a numberpad is the only serious layout issue.

The Dell XPS 15 has a vast trackpad with an accurate, smooth surface. It’s got full gesture support, and its in-built buttons are snappy. The only way you’ll get anything better is by connecting a USB mouse.

The XPS 15 9510 is available with three different screens, with two IPS options returning from last year alongside a new OLED panel. All three have a 16:10 aspect ratio, which delivers more vertical space for web browsers and documents when compared to conventional 16:9 displays.

The laptop I’ve reviewed has the pricier of the two IPS panels – a 15.6in unit with a 3840 x 2400 resolution. It makes a big first impression: its brightness level of 457 nits is huge and means this display works well indoors and outdoors, even if it falls short of Dell’s quoted 500-nit figure.

That brightness level combines with the 0.26-nit black point to deliver a contrast ratio of 1,758:1. That’s fantastic for an IPS screen, and it means that the XPS 15 serves up huge vibrancy and depth.

Surprisingly, the display doesn’t quite stack up in the colour department. The screen has a mediocre Delta E of 4.36, which is fine for everyday work but not good enough for tasks that require near-perfect accuracy.

It’s a shame because the panel displays 100% of the sRGB gamut and nearly hits that mark in the Adobe RGB and DCI-P3 spaces, so it’s easily got the colour breadth for those situations.

Dell’s PremierColor app can switch between colour modes, but that doesn’t improve the Delta E. And while certain colorimeters can calibrate this panel, that only improved the Delta E to 3.56 – and that’s still not quite good enough.

Don’t get me wrong: this is still an excellent screen. It’s bright, punchy and produces loads of colours, so it’s still good enough to tackle most tasks. But if you need colour accuracy, Dell’s OLED alternative will likely be better.

Happily, the Dell XPS 15 has superb audio gear no matter the screen. The speakers sit on either side of the keyboard and supply loud, punchy and clear sound. They’re some of the best speakers you’ll find on a laptop, and slightly overbearing bass is my only criticism.

This XPS 15 9510 has an eight-core Intel Core i7-11800H processor, and it sits alongside 32GB of dual-channel DDR4 memory and a 1TB SSD. Connectivity comes from dual-band WiFi 6 and Bluetooth 5.1, and graphical grunt from a mid-range Nvidia GeForce RTX 3050 Ti with a modest 45W power limit.

The i7-11800H is an impressive bit of silicon. In Geekbench’s multi-core test the Dell scored 9008, and it managed a result of 6,214 in PCMark 10. The Geekbench score is beyond what AMD’s popular Ryzen 7 5800H can manage, and the Intel chip equals AMD’s popular silicon in PCMark 10.

And, with reasonable SSD read and write speeds of 3,440MBs and 3,252MBs, you can be sure that the XPS will boot and load applications quickly.

It all bodes well for real-world use. Dell’s machine handles any everyday work task alongside tough multi-tasking situations and dozens of browser tabs. It’s got the pace to run photo-editing tools, and it can deal with video-editing unless you want to do some high-end 4K content-creation.

It scythes through tough situations while making hardly any noise, and the exterior did exhibit some heat – but it’s never too much, and the aluminium around the base was never uncomfortably warm.

There’s not much that this machine can’t do – you’ll only get more speed if you buy a Core i9 or Ryzen 9 chip or wait for the XPS 15’s inevitable 12th-gen upgrade.

The graphics core is less impressive. The low-power RTX 3050 Ti scored 18,338 in 3DMark Night Raid. That’s better than any integrated core and it’s good enough to lend a hand in creative apps, but you’ll only be playing casual games and esports titles at 1080p here.

Still, it’s more than a lot of laptops come with now. The latest Huawei MateBook X Pro (2022) is a little smaller at 14.2in but is a similar price yet you’ll be relying on Intel Iris Xe Graphics.

Above you can see how the Dell XPS 15 9510 compares to rivals including the Surface Laptop 4, Asus ZenBook Duo 14, Huawei MateBook 16 and MacBook Air M1.

The Dell’s 86Wh battery lasted for 10 hours and 56 minutes in our usual video playback benchmark with the screen at 120 nits, and in a PCMark 10 work test, the Dell XPS 15 lasted for nine hours and four minutes.

Those are reasonable results for a powerful 15.6in laptop, and you’ll get through the working day with this machine unless you really push the hardware.

If you do want to make the most out of the internals, though, be prepared for longevity to drop. With our work test running with the display at full brightness the Dell lasted for six hours and 33 minutes, and a gaming test saw lifespan drop to just over two hours.

However, there appears to be a Core i5 model with 8GB RAM that’s only available via John Lewis for £1,499.

If you don’t want to buy from Dell, you can get the XPS 15 9510 from the likes of Amazon, John Lewis, Currys, Laptops Direct, Very and Ebuyer.

In the US you can buy it from Amazon, Newegg, Walmart and Best Buy.

This option is more akin to the latest Huawei MateBook X Pro (2022). That does have a high-res touchscreen and similarly impressive specs but the screen is smaller at 14.2in and there’s no dedicated GPU.

The XPS 15 is available with 64GB of memory and 2TB SSDs alongside the more powerful Core i9-11900H processor, but be prepared to spend big for those upgrades: that fully-upgraded XPS 15 is only available with the OLED display and it costs £3,223 or US$3,199.

Check out our chart of the  best laptops to see all the top options right now. If you need something cheaper then head to our best budget laptop chart.

The Dell XPS 15 9510 remains one of the best work laptops on the market today.

It’s slim, light for its size, robust and looks fantastic, it’s got loads of processing power, and a great keyboard. Furthermore, you get a vibrant, punchy display that works well indoors or outside, and its battery will see most people through a productive day.

It’s a superb work notebook for anyone who wants a sleek, powerful machine, although we’d look elsewhere if you need a machine with perfect colour accuracy, lengthy battery life or loads of ports that aren’t USB-C.