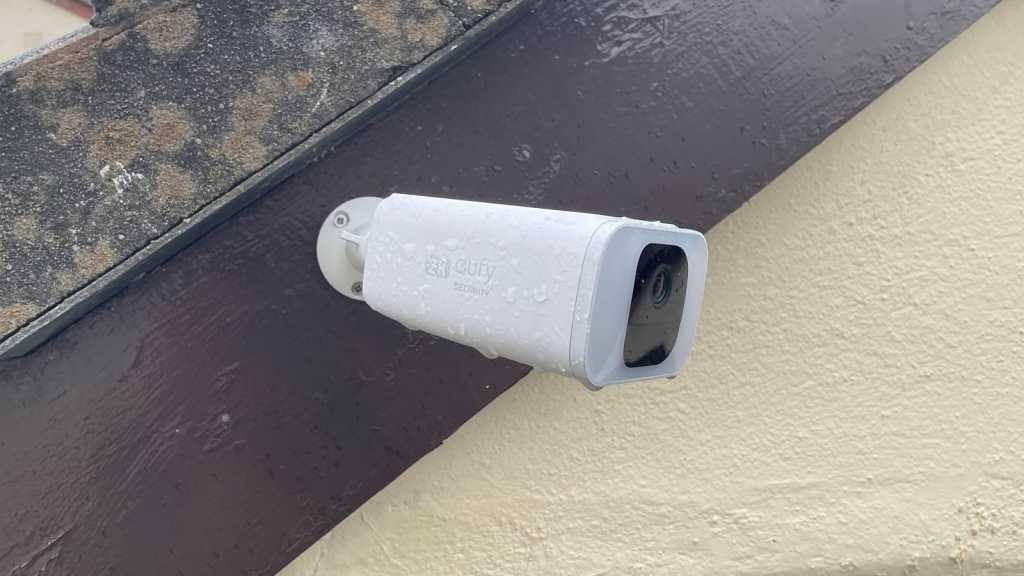 This hassle-free security camera is chunky but is solar powered and has superb picture quality.

Solar power. That elusive renewable energy we’ve never truly harnessed, despite it now being well into the 21st century.

As a child of the ’80s I remember fondly my Casio HS-8 – a pocket calculator that almost magically didn’t need batteries thanks to its small solar panels. It served me well through primary school to university, and seemingly offered a window into a possible future without discarded Duracells or unwieldy power supplies.

Things, of course, didn’t quite pan out like that, but recently there have been signs that solar power is back on the agenda with tech firms. Samsung, notably, is using panels in its latest high-end TV remotes, and is widely rumoured to be developing a sun-powered smart watch.

Here, though, solar power is the key feature of this new security camera from Chinese brand Eufy.

The SoloCam S40 has an integrated solar panel and Eufy claims the device requires just two hours of sunlight a day to maintain enough power in its battery to work 24/7. This offers a tangible benefit over many smart security cameras that either need their batteries regularly recharged, or require being connected to the mains for power, limiting where they can be positioned.

The S40, which has a 2K resolution, also has a built-in spotlight, siren and talk-back speaker, while its 8GB of internal storage means you don’t have to pay for expensive cloud storage subscriptions for viewing the camera’s motion-triggered video recordings.

So does the Eufy SoloCam S40 mark the start of a solar-powered revolution for security cameras, or will a lack of sunshine leave your home vulnerable to intruders? Read on for our verdict.

Inside the box, you get the camera itself, a plastic ball-jointed, pivoting bracket for mounting the camera to a wall, screws, a USB-C charging cable, plus a handy drill template for when attaching the unit to a wall.

Like its predecessor, the S40 is a standalone unit that connects directly to your home Wi-Fi network and can therefore be mounted anywhere you like on your property so long as it can still receive a strong signal from your router. Of course, you also need to position it in a spot that receives at least two hours of direct sunlight to keep the battery topped up. 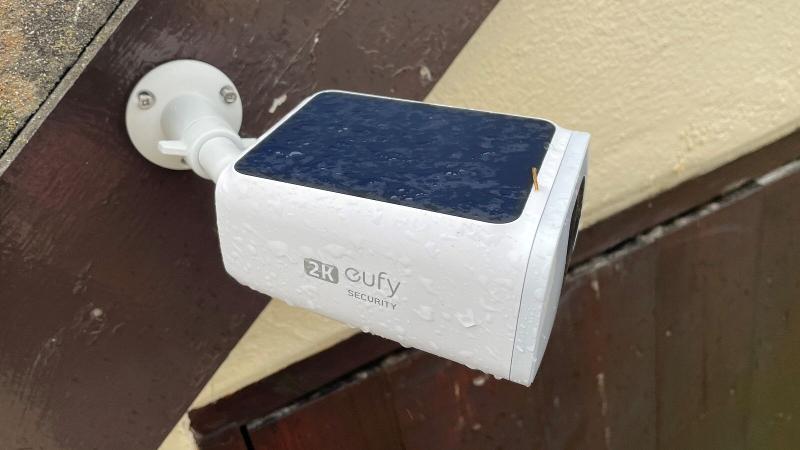 The matt black solar panel is on the top, and doesn’t have the typical shiny photovoltaic sheets we’ve come to expect of the technology. The camera weighs a hefty 880g and measures ‎50 x 85 x 114mm and is weatherproof to IP65 standard, so it should stand up to whatever the elements can throw at it.

Opening a flap on the back reveals a sync button and USB-C charging port, while the bottom of the S40 houses the unit’s speaker. A microphone is placed to the left of the camera lens on the device’s face, alongside a photo-sensitive sensor and motion sensor LED indicator.

The S40 captures video footage at up to 2K resolution, has a 90dB alarm that can be triggered either manually or automatically, AI person detection, automatic infrared night vision via a single LED as well as full colour filming in darkness via its built-in flood-light.

The SoloCam also allows you to control various features and view the feed using the Alexa and Google Assistant voice assistants, although Apple’s HomeKit is sadly not supported.

Much like previous Eufy cameras, the S40 is straightforward to set up. You are encouraged to fully charge the device before installation, and that took a full eight hours before the battery had reached 100 per cent and we could get things up and running.

Theoretically this is the only time you’ll need to charge the because of the solar panel, but more on that later.

The rest of the set up process is a breeze. After downloading Eufy’s app onto your smartphone or tablet and creating an account, it’s just a case of pressing the sync button on the camera, selecting your home Wi-Fi network and then using the camera’s lens to scan a QR code that is displayed on your phone. Once you’ve named your camera, it’s ready to be mounted for monitoring.

The Wi-Fi antennae appear to be very good, with the S40 easily able to maintain a connection to our router when positioned over 20 meters away. 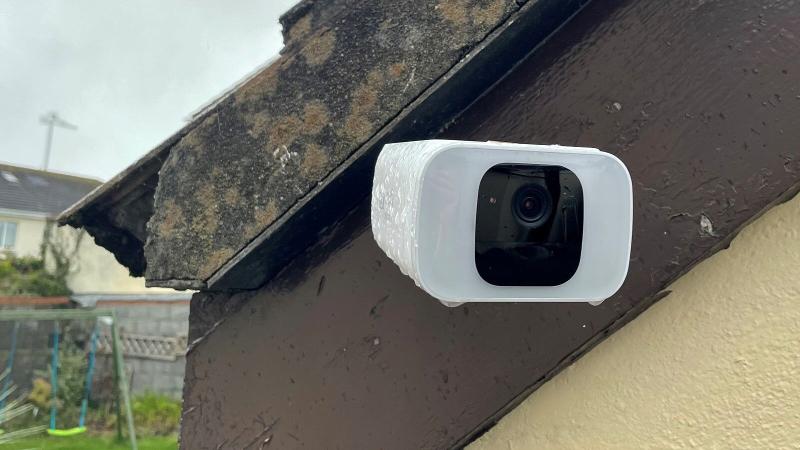 The companion app for the S40, which is used for the entire Eufy security camera range, has undergone quite a few updates and refinements during our testing on both Android and iOS. While initially prone to hanging and crashing, it became reassuringly stable in the latter period of the review process.

The app gives you thumbnails from any Eufy cameras you have installed and tapping on one take you to a live feed from that camera.

The S40 doesn’t record footage continually, but instead captures short video clips when motion has been detected. You can manually record footage for however long you like via the app directly to your mobile device’s storage rather than the S40’s storage. But prolonged clips quickly consume the SoloCam’s battery, which is why clips are so short by default.

In the default Optimal Battery Life mode, those clips are between 10 and 20 seconds but you can switch to Optimal Surveillance mode which enables clip lengths up to 60 seconds, or dig into the settings and customise the length up to 120 seconds – two minutes.

Of course, increasing recording time will drain the battery, so you’ll want to find a compromise between the two.

As well as videos, still images from the camera can also be captured and saved to your mobile device. 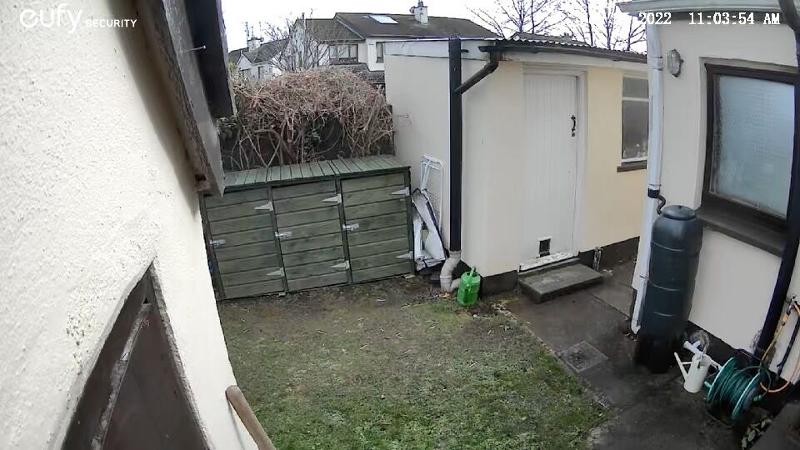 In our testing it took about five to six seconds for an alert to be received to a mobile iOS device following a detection. Tap on the notification and you’re instantly presented with a playable video recording of the incident.

It’s hard not to be impressed with the 2K resolution images provided by the S40, with video from the 130° field-of-view lens delivered with clarity and good colour balance.

Reassuringly, there are no over-exposure blow outs when the camera lens is placed in direct sunlight, while colour footage during night time when using the 600-lumen spotlight also looks great – with clothing details and tone accurately captured.

The use of the flood light is, of course, fairly taxing on the battery, so most users will likely forgo using the light and opt for the night-vision mode which also delivers exceptional footage, albeit in monochrome.

Audio performance from the microphone is also excellent, providing clear, distortion-free recordings even during adverse weather.

The S40’s in-device AI identifies whether motion has been caused by a person or another source, with options on the app allowing you to filter if you want to detect people, animal or any significant movement registered by the device. The S40 can also be set up to only register movement within selected activity zones.

Somewhat disconcertingly, the app also offers the option for “crying detection”, with its function not fully explained in the companion manual. 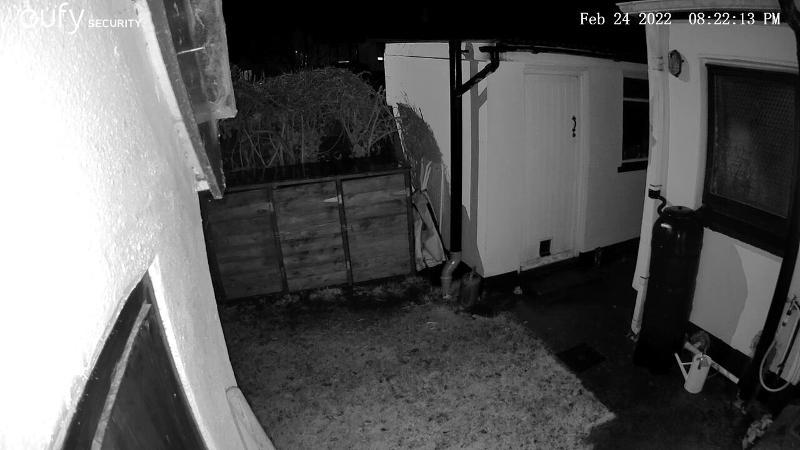 The detection tech worked remarkably well during testing, with clear thumbnails of detected humans provided with alerts when triggered. The only false alarm was a pink hand towel left to dry on an outside tap. This was detected as a human as it flapped in the breeze.

The app also allows you to create a recording schedule, configure alerts and use your phone’s mic for two-way communication with anyone in range of the camera – a feature which works impressively well with little lag.

Controls for the built-in spot light brightness, tone and the 90db siren are also to be found within the app. It’s worth noting that the option for manually turning on the light and the siren are buried in a sub menu – far from ideal should you quickly need to deter a would-be intruder. They need to be on the main screen. 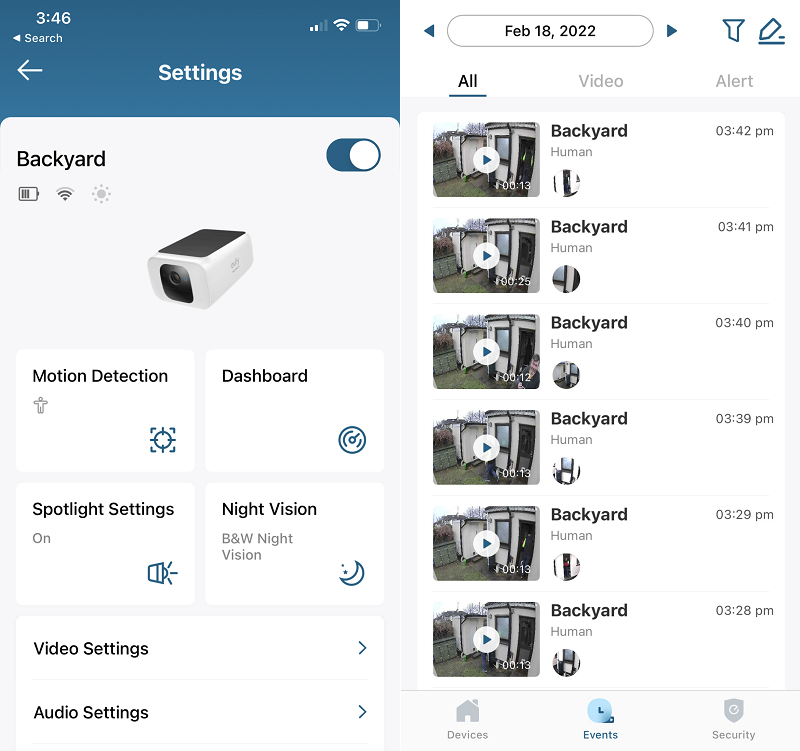 It’s also a pity that the light is limited to short bursts of usage, preventing its use as an exterior light for your property.

We tested the S40 during a two month, mid-winter spell in consistently overcast Dublin – arguably the least favourable set of conditions for a solar panel this side of Finland. During that period the battery lost between 1 to 2 per cent each day, with the remaining capacity hovering around 63 percent by the end of our testing.

This was with the device partially aimed at a doorway, meaning the camera was triggered on average 14 times a day. According to the app’s handy dashboard, during that period the solar panel provided around 25mAh of battery replenishment a day– equal to roughly 0.2 per cent of the overall battery capacity. Not a huge contribution perhaps, but not unsurprising in the conditions. 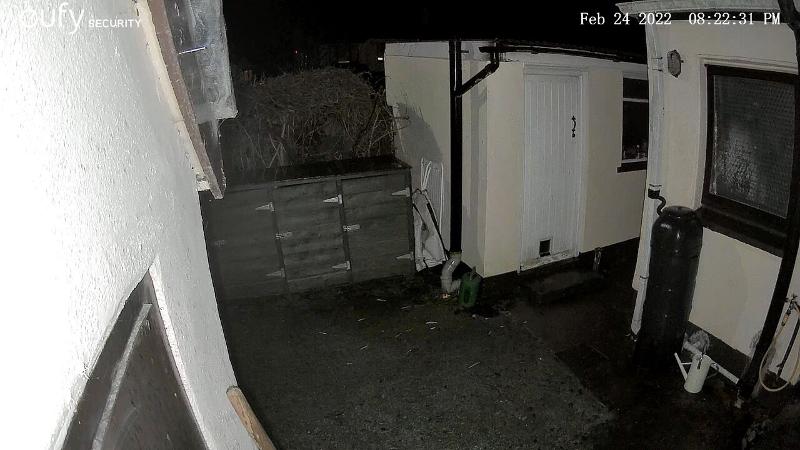 The big question, and one we can’t answer at this point, is whether the extra sunlight in the spring and summer is enough to keep it going without having to manually recharge the device. On the basis of our testing, it seems likely that the device would need to be taken indoors and hooked up to a charger within the next few months.

This is by no mean a deal-breaker – and for those in sunnier parts of the world it’s unlikely to be an issue at all – but it reduces the convenience of its key feature for users where cloudy weather is the norm during autumn and winter.

The S40 builds upon the tech featured in that model, quite literally, with it being a much bigger device in order to accommodate its solar panel. Unsurprisingly, it’s also more expensive, coming in at £199 ($199/ AU$349.99), £60 more expensive than the E40.

You can buy it direct from Eufy as well as from Currys and Laptops Direct.

See more options in our chart of the best indoor and outdoor security cameras.

It’s hard to make a full judgement of the S40’s solar performance within the timeframe of this review – it certainly works, and we expect solar charging to be a non-issue during the spring and summer months. But what we can’t say for sure at this stage is whether it could last a full autumn and winter without needing to be manually recharged.

For some users this won’t be too big an inconvenience, but with the similarly specified, but solar-less SoloCam E40 able to last for up to four months before needing to be juiced up, that cheaper model may make more sense for users in parts of the world where it isn’t all that sunny.

This point aside, with its cost-effective subscription-free storage and slick app, the S40 is about as hassle-free as outdoor security cameras get.

Coupled with its superb picture and sound quality, cable-free versatility and impressive AI detection, it delivers on its promise of being a truly modern security camera.