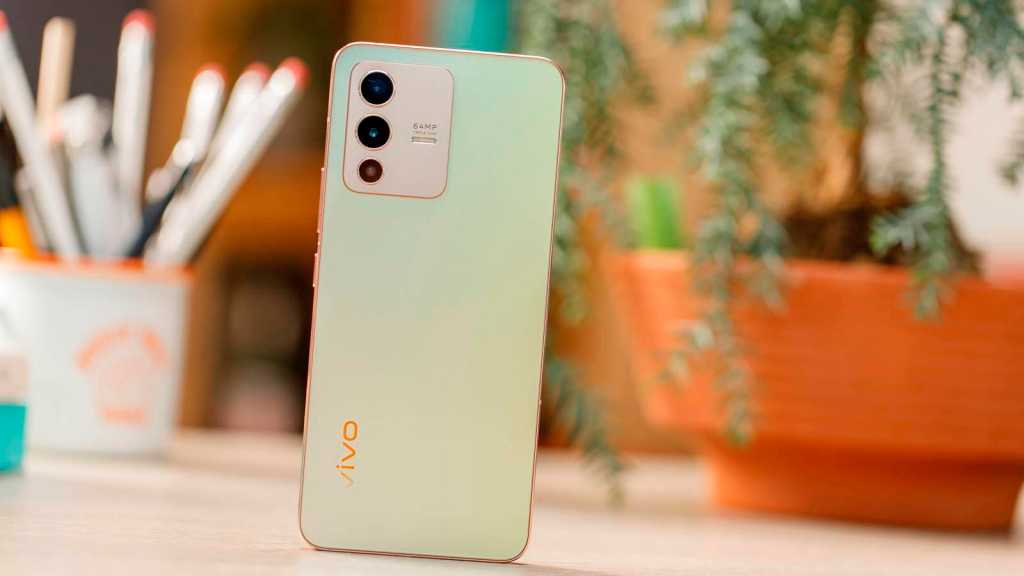 The Vivo V23 is a decent all-rounder with an unusual colour-changing design, but the dual selfie camera isn’t quite good enough to stand out – especially given the odd choice to strip the OIS found in its predecessor.

The Vivo V23 is the cheaper of a pair of phones in the V23 series, the latest in the company’s line of smartphones focussed on selfies and style.

With that in mind, the V23 shares the exact same dual selfie camera as the more powerful V23 Pro, along with its unusual colour-changing design, though this time it’s wrapped in an iPhone-esque square frame.

The Vivo V23’s design stands out in a couple of obvious ways.

The first is the colour. Yes, you can buy it in black, but more interesting is the ‘Sunshine Gold’ finish, which looks gold most of the time but shifts to a striking deep turquoise when the glass catches the light thanks to a UV-reactive finish. It’s a novelty, but a very clever one, and likely to appear in more phones this year – Realme has already appropriated the tech for the Realme 9 Pro phones.

Even the fact that the phone’s rear is encased in glass in a highlight, because at this price you’re much more likely to find plastic-bodied phones elsewhere. Yes, glass is more fragile – so you may see it as a downside – but it helps make the V23 look and feel far more expensive than it is.

Look beyond that and you’ll probably notice just how much this looks like an iPhone. There’s the wide notch on the screen – thanks to the dual selfie cameras – but more important is the choice to use completely squared off sides to the body. It leaves the V23 feeling undeniably unoriginal, but if you’re going to ape anyone’s design language then Apple isn’t a bad choice. Still, if you’re not a fan, the V23 Pro opts for curved edges instead, and so looks much less Apple-y.

It doesn’t hurt that thanks to the taller and thinner aspect ratio of this phone compared to Apple devices, this is actually more comfortable to hold than most iPhones, with the corners less likely to dig into your palms. It also weighs just 179g, which is light for a modern phone.

While you’ll find Schott Xensation Up (a Gorilla Glass rival) protecting the display, there’s no such security on the rear glass, nor is there an IP rating for dust and water-resistance. That’s a touch frustrating, because it means that as pretty as the phone’s design is, you’ll definitely want to cover it up with a case ASAP.

The V23 packs a 6.44in screen – a pretty average size for a modern Android – with a 90Hz refresh rate. That might sound disappointing with 120Hz handsets now commonplace, but Vivo has instead prioritised fitting an AMOLED panel, which means you get great colour reproduction and deep blacks, in addition to the smooth animations brought by the 90Hz refresh.

Using AMOLED also has the advantage of allowing an in-display fingerprint scanner. This one is fairly fast and reliable, and I have no real complaints about it. Face unlock is also an option thanks to the front-facing cameras.

It’s a shame that having two selfie cameras necessitates a large notch. It may add to the iPhone-y appeal, but it does look a little obtrusive, especially now that many similar phones use much less obtrusive punch-hole camera arrangements.

As for audio, you won’t get stereo sound sadly. There’s a single downward-firing loudspeaker, but to be honest it’s not great. It gets fairly loud, but even at lower volumes there’s a muddiness to the sound, and little bass even by smartphone standards. As is now typical, there’s no dedicated headphone jack.

The V23 is powered by MediaTek’s Dimensity 920 chipset – a slight downgrade on the Dimensity 1200 found in its Pro sibling. It’s combined here with either 8 or 12GB of RAM, and 128 or 256GB storage – which isn’t expandable, as there’s no microSD slot.

I’ve been testing the higher spec 12+256GB model, but thanks to the mid-range chipset performance is still limited when it comes to benchmarks. This is a minor upgrade on its predecessor, the V21, but lags behind some more performance-focussed phones around the same price.

Still, that’s only in benchmarks, and mostly just reflects the fact that this isn’t a phone designed for high-end mobile gaming or productivity. If you mostly use your phone for social media, the camera, and more casual gameplay, there’s really little to worry about here – the V23 runs smoothly and has showed no signs of lag or stuttering in the time I’ve been testing it out.

Despite the cheaper chip there is still support for 5G connections. While there’s no support for the latest Wi-Fi 6 speeds this is unlikely to matter much to most, and the inclusion of Bluetooth 5.2 is probably more important, improving performance for wireless headphones. There is NFC too, for contactless payments, but this does vary by region – so double-check if it’s included where you live.

The 4200mAh battery included here is perhaps a little below-average for Android, but in practice it holds up. Thanks to the power-efficient chipset, the V23 stretches that cell to comfortably last a full day of typical use, and some less frequent users will probably even find it’s a two-day device.

44W wired charging is fast enough to top the phone up by 71% in half an hour, which should be sufficient to get the phone to the end of the day.

There’s no support for wireless charging, but that’s typical of this price – it would be a bigger surprise if it was included.

The camera setup in the V23 is a touch unusual, if only in the sense that the front-facing cameras are probably more exciting than the rear ones.

There are two selfie cameras here: a 50Mp main lens and an 8Mp ultrawide. The main camera is great when the light is good, with detailed and crisp capture helped by an aperture of f/2.0 – unusually large for a selfie camera on a phone. Results are usually bright and punchy, and are especially good when you consider how affordable the phone is – some phones twice the price don’t take selfies this well.

Where it struggles is in low-light, with disappointing results whether you use Night Mode or not. The previous phone in the series, the V21 (no, there wasn’t a V22 – we’re not really sure why), solved this problem by adding optical image stabilisation (OIS) to the selfie camera, which helped massively with maintaining detail during the long exposures necessary in lower light.

This time around Vivo added the ultrawide instead of OIS, which means the V23’s selfie camera is really no better than any other in the dark – and also doesn’t boast stabilised video for vlogging.

The upside is that you do get the option of an ultrawide camera, but since the 8Mp sensor here is a sharp drop in quality from the main lens – and abysmal in low light – this doesn’t feel like the right trade-off to me.

While the front-facing camera setup is actually the same as the V23 Pro, the rear cameras differ – at least in the main lens. The 64Mp, f/1.9 camera here is definitely a downgrade from the 108Mp shooter on the Pro, but it’s not bad.

Like its front-facing sibling it fares best in good lighting, though despite also lacking OIS it handles dark conditions much better, likely thanks to a wider aperture and larger sensor. Night mode photos really aren’t bad at all, even managing to correctly expose bright lights within dark environments.

If I have a problem with the rear camera here it’s mostly down to the autofocus. On a few occasions this has really missed the correct focus point, especially in close-up shots. It’s also slow enough that I found it near-impossible to take photos of a cat, which has got to be a serious point against any phone.

The other two rear lenses are another 8Mp ultrawide, which is about as good as the one on the front, and a 2Mp macro lens that really isn’t up to much – but you’ll find similar quality secondary lenses on just about any phone around this price.

The V23 ships with Android 12, which is welcome, and runs Vivo’s Funtouch OS 12 on top, which is perhaps less welcome.

Funtouch is far from my favourite Android skin, and here comes pre-loaded with various Vivo apps you won’t want, along with a few intrusive advertisements.

While mandatory Android 12 features are included, like the new privacy dashboard and alerts when the camera or microphone are in use, you won’t get all the cosmetic changes Google introduced. Most notably, the Material You feature, which customises the colours of your user interface based on the palette of your wallpaper, is nowhere to be found in Vivo’s version of Android 12.

While Vivo has promised that its X-series flagships (including the recent X70 Pro and X70 Pro+) will receive three years of major Android version and security updates, there’s been no such promise for the V23. So while it launches with Android 12, I don’t know which future Android versions the phone will ever be updated to, though this year’s Android 13 is at least likely.

The V23 is available now in India and select Asian and European markets, but don’t expect it to ever reach the UK, US, or Canada.

In India the V23 is available from Flipkart, while in Europe it’s easiest to buy from Amazon. Here are the prices with rough price conversions to give you an idea of what to expect in other markets.

Note that in Europe only the 12GB+256GB version is available and its pricing actually varies, going up to €549 in Germany.

That puts the phone at the cheaper end of what we consider a mid-range phone, up against the likes of the Redmi Note 10 Pro, Realme 9 Pro+, OnePlus Nord CE 2, and Poco F3. If you’d rather look at other options from the same brand, check out our ranking of the best Vivo phones right now.

The Vivo V23 is a decent all-rounder, but in today’s mid-range market that often isn’t enough. A phone like this needs to excel somewhere, and unfortunately the selfie camera here isn’t quite good enough to deliver as the phone’s USP – especially given the odd choice to strip the OIS found in its predecessor.

The design may help this phone appeal to more people, thanks to the combo of a colour-changing finish and iPhone-inspired shape, though more than most parts of the phone this is of course a matter of taste.

The V23 certainly isn’t a bad phone, but it just doesn’t do enough to outpace some impressive competition, and falls short exactly where it should be strongest.