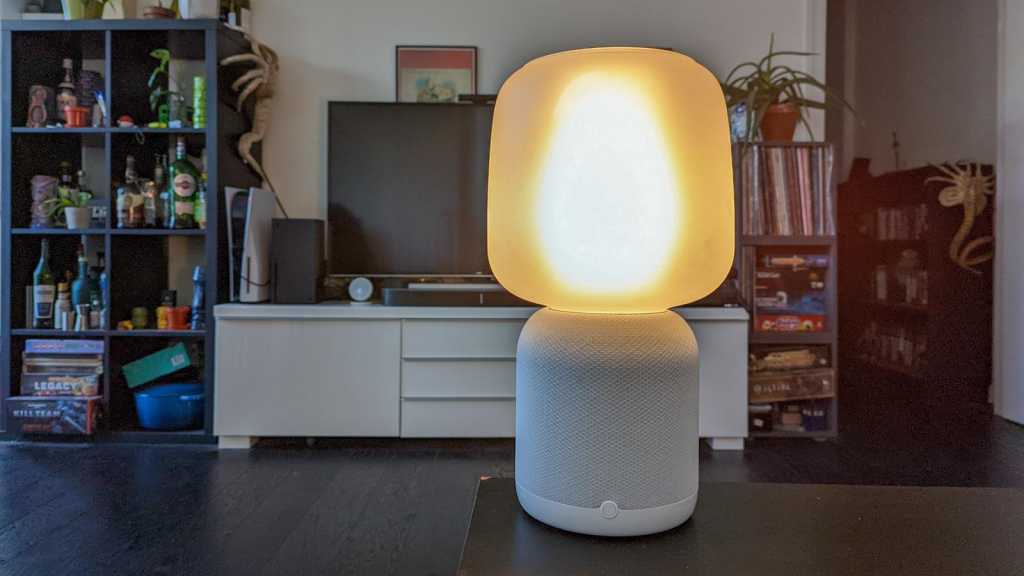 The Symfonisk speaker lamp remains a bit of an oddity, but for small spaces this is a handy hybrid, and both the aesthetic and the audio have been improved on the first generation.

The partnership between flatpack furniture giant Ikea and Wi-Fi speaker masters Sonos has been fruitful, if a little strange, and nothing typifies that more than the Symfonisk lamp speaker: a hybrid product that’s simultaneously a no-brainer and a total oddity.

I was a big fan of the original lamp speaker, but it clearly had some flaws. That’s why I’m pleased to see that the two companies have gone back to give it another go, and while this second-gen isn’t perfect, it’s by far the Symfonisk speaker that will suit the most people.

The first Symfonisk lamp looked…unique, to say the least. This second version is clearly a close relation, but Ikea has pared things back a little with a design that should suit a few more living rooms than before.

Available in either white or black, it also comes with a choice of lampshades. I’ve been reviewing it with a frosted glass shade that’s reminiscent of the original, but you can also opt for a double-layered fabric version if you prefer. You can also mix-and-match a white lamp with a black shade, or vice versa.

The body of the speaker itself is still wrapped in a fabric mesh, but the flared plastic base from before has been removed for a smoother, cylindrical silhouette.

Controls are simpler too. The previous knob – which always suggested dimmer controls that were never there – has been swapped for a simple push-switch to turn the lamp on. Round the opposite side you’ll find play/pause and volume buttons for the speaker.

Keeping these apart was presumably to make it easier to turn the lamp on without accidentally pausing your music, but it is a little odd having to reach behind the speaker to hit a volume button. Then again, this may be a smart move – with people likely to control their audio from a phone more often than not, there’s something to be said for tucking away buttons that you may not use often – but do need to have every once in a while.

Ikea has also made the smart move to switch to the common E26/27 light bulb fitting, so this is more likely to take bulbs that you already have around – and it will be easier to find a replacement if you need one.

You can use a regular light bulb, or you can of course fit the lamp with a compatible smart bulb – either from Ikea’s Trådfri range or from any other manufacturer.

It’s worth raising one small annoyance though – if the lamp loses power (either through a power cut or by being unplugged) it won’t remember its power state, so any smart bulb will have to be manually reactivated. This shouldn’t come up too often, so it’s hardly a dealbreaker, but do bear it in mind.

Once again, audio comes courtesy of American audio company Sonos, which makes its own impressive range of Wi-Fi speakers alongside these Ikea collaborations.

Given the size and price, you might be hoping that this is secretly a way to buy the $219/£199 Sonos One for a bit less – and get a free lamp thrown in to boot.

Sadly that’s not quite the case – though don’t get too disappointed. The lamp speaker has its own custom audio architecture – distinct from either the One or the first-gen lamp – and so doesn’t sound quite the same as either.

Sonos says it’s prioritised improving the audio dispersion this time around, so that you get proper 360-degree sound wherever the lamp is, and don’t have to stress too much about placement. That’s a smart priority for this product – you might be willing to put a speaker wherever it will sound best, but there are probably only one or two spots in a room where you want to stick a lamp.

There are trade-offs to that decision. While sound does carry well, there’s a bit less clarity here than I’m used to from Sonos speakers. On busy pop and rock tracks it’s all too easy for individual instruments to get lost in the mix. And while there’s plenty of bass for day-to-day listening, this isn’t enough to drive even a Covid-friendly party.

To be clear, this isn’t a bad speaker by any means – it’s bright and well-balanced, and can turn itself pretty capably to most genres. This will suit all but the fussiest listeners, but audiophiles hoping for peak Sonos will have to spend a bit more to get it.

You do at least get the usual range of Sonos smarts. You can get the speaker online via either Wi-Fi or Ethernet, and setup takes only a minute or two with the official Sonos app, including a final step of pairing the speaker with the app over NFC by touching your phone to it.

The app also nets you an EQ to tweak the speaker’s sound profile, and of course options to connect to music services and pair it with other Sonos speakers for multi-room audio (or to pair two of these together for stereo sound, if you don’t mind having two lamps too).

This isn’t a proper smart speaker though. There are no microphones, so you can’t use this together with the Google Assistant or Alexa directly, unlike some other Sonos products that have the virtual assistants built in.

If you’re an Apple user you can also use AirPlay 2 to easily control the speaker from your iPhone, iPad, or Mac. There’s also support for Apple’s TruePlay, which you can use to optimise the sound if you have an iOS device to hand.

At $169/ £185 for the textile version and $189/ £199 for the glass, the Symfonisk is around the same price as its predecessor. For a little bit more you could get the Sonos One, which delivers slightly better audio and built-in voice controls – but then that isn’t a lamp.

Fundamentally, even setting other Sonos speakers aside, you can get a better-sounding speaker elsewhere for the money, though I don’t want to downplay the quality here too much.

It doesn’t feel unfair to say that the Symfonisk lamp remains a bit of an oddity. How many people really need, or even want, a lamp that is also a speaker?

But for small spaces this is a handy hybrid, and the aesthetically fussy may also relish the chance to hide their audio gear inside a less obtrusive bit of home furniture.

If all you want is a speaker, then you can probably do better than this – certainly the modest price jump to the Sonos One is well worth it. But if you like the idea of a lamp that’s loud, this is a solid refinement of Ikea’s unique vision.