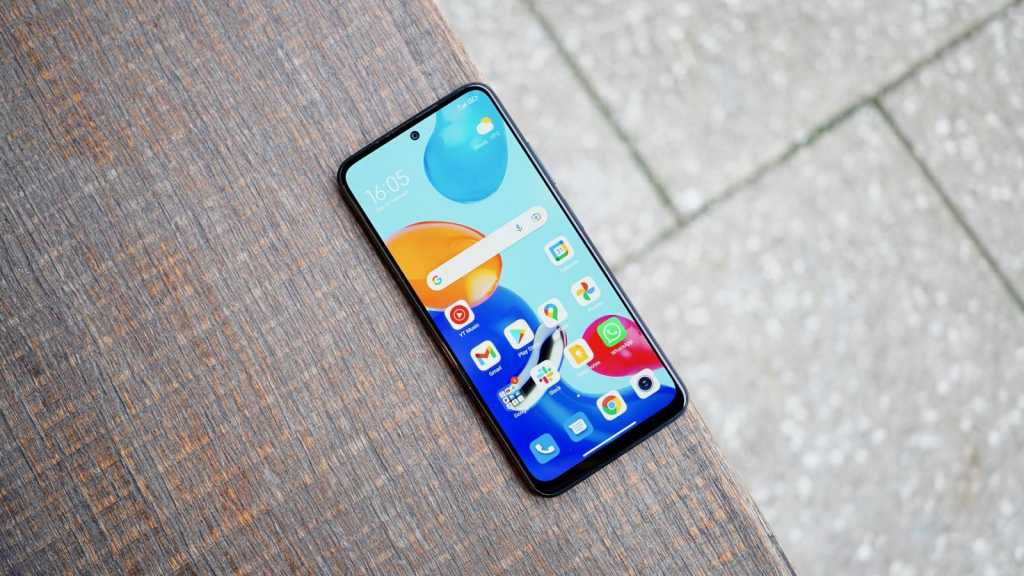 A quietly appealing budget phone that gives you a 90Hz AMOLED display and exemplary battery life in a well-put-together design for under £200. If you don’t need 5G or a particularly great camera, it’s a great choice.

Xiaomi has launched something of an assault on the affordable smartphone market over the past couple of years with its Redmi and Poco brands, supplying frequently surprising combinations of high quality components for a low price.

The Redmi Note 11 marks this particular sub-brands first effort of 2022, and it’s another classy yet affordable effort. There aren’t many well-under-£200 phones out there offering the configuration that the Redmi Note 11 does.

In the process of doing this, it also steps up from the Redmi Note 10 in a couple of significant ways.

Last year’s Redmi Note 10 family impressed with its design, which could be summed up as ‘plain but relatively classy’. You can generally judge a cheap phone’s design by the number of obviously cheap elements on display.

On this front, the Redmi Note 11 continues the good work. All of the materials are matte, from the convincingly metal-effect frame to the soft-touch plastic back. The latter is a bit of a fingerprint magnet, but it feels good in the hand.

Around the front, the chunky bezels are a telltale sign that you’re handling a cheap phone, particularly the extended chin. So too is the hole-punch notch, which has a tellingly (and distractingly) shiny surround.

It’s good to see a 3.5mm headphone jack making a return. It’s easy to assume that everyone has moved to true wireless earbuds by now, but until they’re bundled into the box as standard that won’t be the case.

Talking of welcome audio features, the Redmi Note 11 also packs a pair of stereo speakers. That’s not something you see in every sub-£200 phone.

Perhaps the stand-out component with the Redmi Note 11 is the display. It’s not especially large or sharp, although at 6.43-inches and FHD+ I have no complaints in either regard.

What’s notable is that it’s a vibrant AMOLED display rather than the kind of drab LCD panel that’s more common at this price point. Xiaomi hasn’t skimped on the smoothness either, with a 90Hz maximum refresh rate ensuring that content slides by nice and smoothly once activated.

On that latter front, it’s a direct improvement over last year’s Redmi Note 10, which was stuck at 60Hz. It’s also an improvement over more recent rivals, like the Moto G31 which oddly dropped to 60Hz compared to its predecessor.

Using an i1Display Studio colorimeter, I recorded a gamut coverage of 100% sRGB, 87.8% Adobe RGB, and 99.9% DCI P3, which is impressively colour accurate.

The Redmi Note 11 runs on Qualcomm’s Snapdragon 680 4G chip, a relatively new mid-range System on Chip (SoC), backed by either 4- or 6GB of RAM.

It’s a solid performer for this end of the market, with average Geekbench 5 multi-core scores that are similar to the Poco X3 NFC and way ahead of the Moto G31.

Its GPU isn’t quite as impressive, with GFXBench results that fall far short of the aforementioned Poco X3 NFC and the Realme 8, and are roughly equivalent to the Moto G31.

One notable omission here is 5G. The Redmi Note 11 doesn’t give you top-level network connectivity, which is a bit of a shame so look elsewhere if this is important to you.

In terms of storage, you get either 64- or 128GB, as well as a microSDXC slot for expansion purposes. In truth, we’re seeing an increasing number of affordable phones make 128GB the minimum. Perhaps this point of regression reveals one of the ways in which Xiaomi has managed to squeeze in some of those more eye-catching components.

Other regular but still welcome specs include NFC for mobile payments, and a speedy and reliable side-mounted fingerprint sensor.

The Redmi Note 11 is ostensibly fitted out with a quad-camera system, but we know what that means by now in the budget market. In practical terms, only two of those sensors are of any great use, with a pair of 2Mp sensors (one for depth, one for macro) serving as so much stat padding.

Let’s swiftly turn to the critical parts, then. The main course is a 50Mp wide sensor with an f/1.8 aperture, which is backed by an 8Mp ultra-wide. The Redmi Note 11S and 11 Pro 5G have 108Mp main sensors.

It’s easy to point to the relative lack of megapixels for the ultra-wide, but the simple fact is that many affordable phones forego an ultra-wide camera altogether.

The main shooter does a reasonable job of capturing detailed shots, given plenty of lighting. That said, I picked up some noticeable grain even in fairly ‘normal’ conditions, and the HDR effect isn’t the most effective I’ve seen, even at this end of the market.

The main camera struggles just as soon as the lights grow a little dimmer, and the Night mode yields shots that are a grainy mess. But show me a budget phone where this isn’t the case.

Detail and balance drop off dramatically when you switch to that 8Mp ultra-wide, and the tone shifts greatly. Again, though, you typically have to spend a lot more money to get a fully realised, expertly balanced ultra-wide experience.

The phone will shoot 2x zoomed shots, but know that these will be cropped from the main sensor, which means even more noise.

The 13Mp selfie camera is adequate, but it did smooth my skin out to a slightly distracting degree. Meanwhile, the portrait selfie mode created that disconcerting forcefield effect around my outline.

All in all, the Redmi Note 11 camera achieves a comfortable par for a £200 phone. But it’s not a stand out component by any means.

Like most other major £200 contenders these days, the Redmi Note 11 packs in a capacious 5000mAh battery.

In my experience, a long 14 hour day of intensive usage that involved some 6 hours and 50 minutes of screen on time left me with around 40% left in the tank. That’s an excellent result and means that the phone is good for two full days of ‘normal’ usage.

In our regular PCMark Work 3.0 battery benchmark the Redmi Note 11 managed a decent 11 hours and 35 minutes. This places it above the Moto G31 and the Realme 8 on 10 hours and 36 minutes, but below the Poxo X3 NFC on 15 hours and 48 minutes.

As we’ve come to expect from virtually all of Xiaomi’s sub-brands these days, the Redmi Note 11 comes up with the goods on charging. It’s bundled with a 33W wired charger, which got me up from 0 to 58% in 30 minutes. It’ll get you all the way up to 100% in just under an hour.

Xiaomi’s MIUI software has never been a particular favourite, with simplistic icons and a general lack of a compelling or even cohesive visual style.

MIUI 13 runs on top of Android 11 here, and it’s more of the same. You still get that bafflingly pointless additional screen, largely devoid of anything, that pops up every time you install an app.

You still also get a bunch of personalisation options that go above and beyond, in their own way. Most notably, there’s a Themes app that’s choc-full of custom wallpapers for you to download and install for free.

There’s no arguing with how fundamentally solid MIUI 13 is. It leaves Google Feed well alone to the left of the home screen, unlike some rivals, and I personally find the default split notification shade to be a pleasing touch. It’s nice being to pull that shade down from anywhere on the screen, too.

But it’s still a fundamentally busy and charmless UI, crammed with too many toggles and distractions.

While the Redmi Note 11 starts at US$179 in terms of global pricing (despite no plans to launch in the States). The UK market will only get the middle of the three SKUs at £199 which is a shame for consumer choice.

It’s available in Graphite Gray, Twilight Blue or Star Blue and is be available from the official Mi Store as well as Amazon, Very. AO, Argos, Laptops Direct, Ebuyer.

Those ordering before 10 March will get a free pair of Redmi Buds 3 headphones.

Here are the details of the three Realme Note 11 SKUs:

It’s an attractive price, but there’s a lot of competition around this mark including Xiaomi’s own devices mentioned earlier and the likes of Realme and Motorola. If 5G is a must then look to phones such as the Oppo A54 5G.

Check out more options in our  best budget phone chart.

The Xiaomi Redmi 11 offers a compelling combination of specifications for under £200. There aren’t many cheap phones that give you a 90Hz AMOLED display for such a price.

It also has a design that, while hardly eye-catching, doesn’t feel remotely tacky. That’s far from a given at this end of the market.

Also noteworthy is the Redmi Note 11’s level of stamina, which will get most people through two days of usage on a single charge. Redmi impresses by throwing in a speedy 33W charger, too.

Performance and camera quality are merely adequate, which is where scaling up to the Redmi Note 11 Pro 5G might be worth considering. But if you’re on a strict budget, this is a phone with few glaring weaknesses.