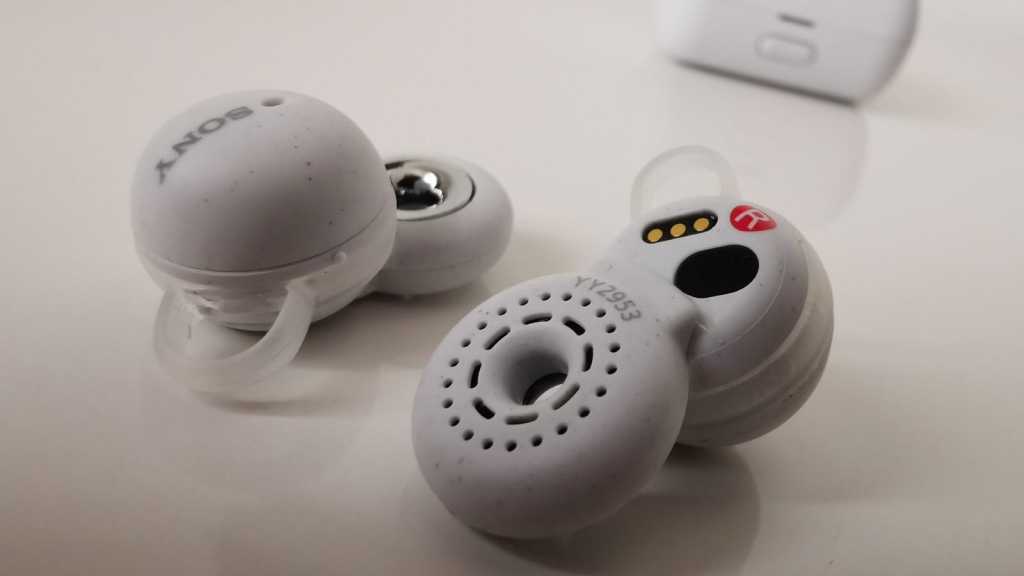 Sony’s diminutive LinkBuds are intended for all-day wear. They feature an all-new driver design, sound crispy clean, and introduce a brilliant new UX control system. But a lack of bass and a tendency to drop Bluetooth connection hampers their appeal.

The very antithesis of its noise cancelling WF-series, Sony’s new LinkBuds are designed to sit in your ears for prolonged periods, positively encouraging ambient noise thanks to a physical hole in the middle much like a ring doughnut.

Sony dubs the concept Always-On – the idea being you can discreetly listen to music or podcasts, while being able to hold conversations with those around you, or when working from home, still hear the postman or courier knock – our Reviews Editor, Chris Martin, also thinks they might be perfect for working from home.

The WF-L900 also open up intriguing opportunities for use in AR gaming and sound navigation like Google Maps. Many noise cancelling headphones already have an ambient sound mode (aka aware or transparancy), which allows extraneous sound to get through, but they tend to dissuade others from engaging in conversation.

Nothing says ‘Don’t bother me’ more than a pair of fancy over-ears. That’s why the design of the LinkBuds is key – they almost go unnoticed. In truth, they look more like Hearables than Head-Fi.

So does the concept work, and just how good are they with music?

The LinkBuds are small. Very small. They occupy 51% less volume than WF-1000XM4 flagship earbuds and are nearly half the weight. At just 4.1g apiece, they’re super light and surprisingly easy to forget once in.

Their distinctive figure-eight shape is dictated by an all-new 12mm open ring driver unit, which looks a bit like a downsized polo mint in the white colourway; this sits adjacent to a bulbous section containing tech such as the DAC and amplifier. 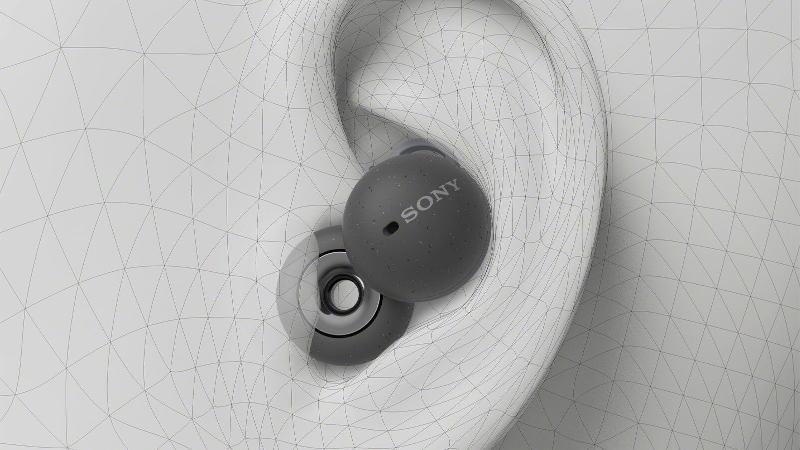 A weird rubber hoop, the fitting support, secures the LinkBud in place by popping inside your ear. Five different support rings are included in the package, so most ear sizes should be catered for. It takes some practice to get them in, but once you develop the knack your LinkBuds will remain happily in place.

Fun fact: LinkBuds are actually made from recycled ABS, derived from car parts and mixed with elements of stone. You can buy them in a white or grey finish and on a practical level, they’re IPX4 water-resistant, so splashes and sweat shouldn’t phase them.

Despite being barely big enough to hold between two digits, there are plenty of features onboard the LinkBuds starting with Bluetooth 5.1.

Speak to Chat, familiar from previous Sony headphones, automatically pauses playback when you start to talk, then resumes when you’re not yakking; Adaptive Volume Control is used to automatically manage volume levels, based on the noise of your environment.

Another Sony favourite, DSEE (Digital Sound Enhancement Engine), is on hand to upscale streams and compensate for losses incurred over Bluetooth. Sony’s V1 processor, also used in the brand’s XM4 headphones, does all the heavy lifting to enable these features. 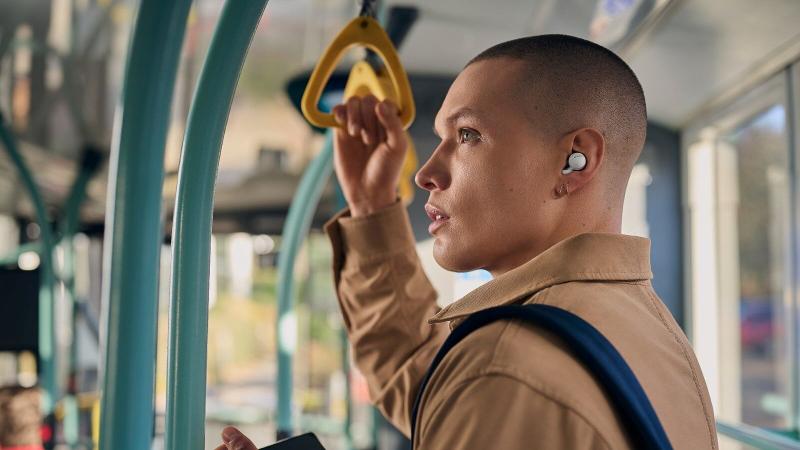 Take care with how many features you enable in the accompanying Sony app though, as they impact battery life.

The buds work with Google Assistant and Alexa, and support Google Fast Pair feature as well as Windows 10 Swift Pair. Apple iOS users can also use them with Microsoft Soundscape.

One of the more bizarre aspects of living with LinkBuds is Wide Area Tapping. Because there’s so little earbud surface area to work with, Sony has come up with a novel method of control: double or triple-tapping the space in front of your ears with your finger.

It’s certainly not foolproof, but you can use the technique to take a call, pause or play music and skip tracks. I found aiming for the tragus gave the best result.

Note that there is no active noise cancelling here and while that makes sense a lot of sense for an open design, others – like the Samsung Galaxy Buds Live and Huawei Freebuds 3 – have tried it in the past.

For buds so small, the LinkBuds WF-L900 have large 12mm drivers able to make a big sound. Given their unusual design, you might expect some level of compromise, but auditioned in isolation, they’re beautifully articulate with an ability to discern fine detail and nuance.

The fact that you’re aware of some room ambiance actually makes them sound all the more naturalistic. They’re almost like downsized open-back headphones. 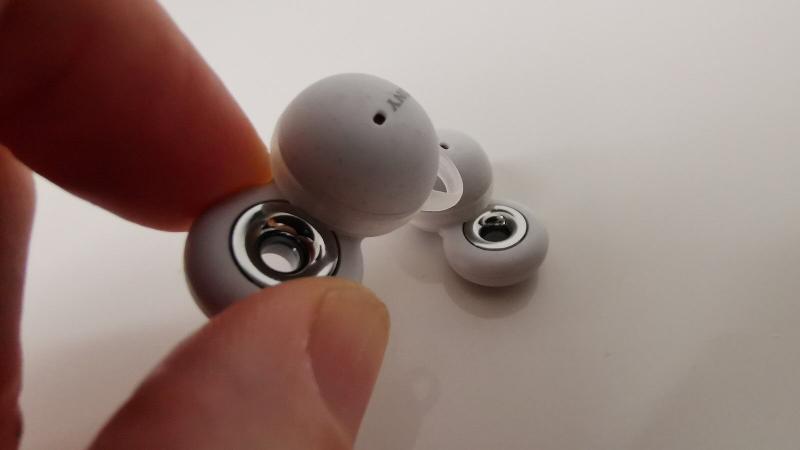 I particularly like the fact that there’s no sharp edge, no sibilance, in their presentation. Whatever your thoughts on Jethro Tull, there’s no doubting that The Zealot Gene is a masterful recording and these diddy earbuds go a long way to doing it justice.

There are caveats, though. Bass depth is limited, and as soon as you seek deeper beats, they’re found wanting.

I also found Bluetooth to be particularly flaky. My weekly constitutional was plagued with drop-outs, where other Bluetooth headphones (including Sony’s) typically performed without issue. What was Mark Kermode’s DVD of the week? No idea, as I lost the connection at precisely the wrong time.

Bluetooth connectivity wasn’t an issue when sitting at a desk though.

Battery life is rated at five and a half hours, while the storage charge case holds an additional 12 hours. For earbuds that lack any form of noise cancellation, this might be considered a little short but can largely be put down to their tiny size.

As mentioned earlier, switching on and using various smart features will reduce the runtime. 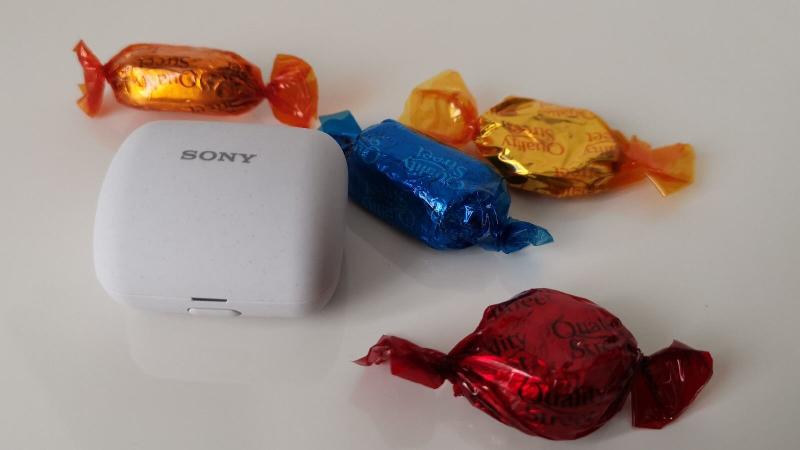 You can find more significant back-up power reserves elsewhere, but the tiny nature of the case is a bonus in itself, slipping almost unnoticed into pockets and bags.

Thanks to quick charging, 10-minutes translates to around 90 minutes playtime. Charging the case is done via USB-C as you would expect.

The LinkBuds WF-L900 are priced at £149/$179.99/€180, which puts them up against Apple’s third gen AirPods and within shouting distance of the Samsung Galaxy Buds Live and  Bose QC Earbuds.

You can buy them from Sony as well as Amazon.

So there’s strong competition on both sides and Audio-Technica today announced the £150 ATH-CKS50TW with similar features, 50-hour battery life and noise cancelling.

Check out our chart of the best true wireless earbuds. 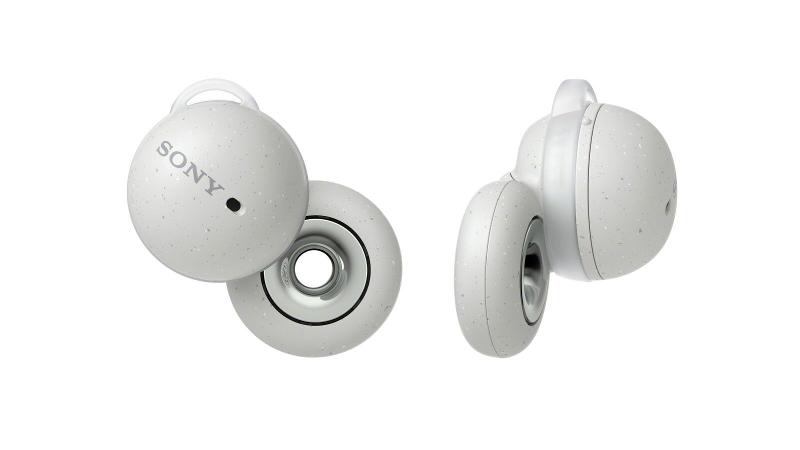 Usability is more of an issue. A tendency to drop Bluetooth connection proves frustrating and they can’t compete with noise cancellers when it comes to commuting. But they could well come into their own with AR and navigation applications.