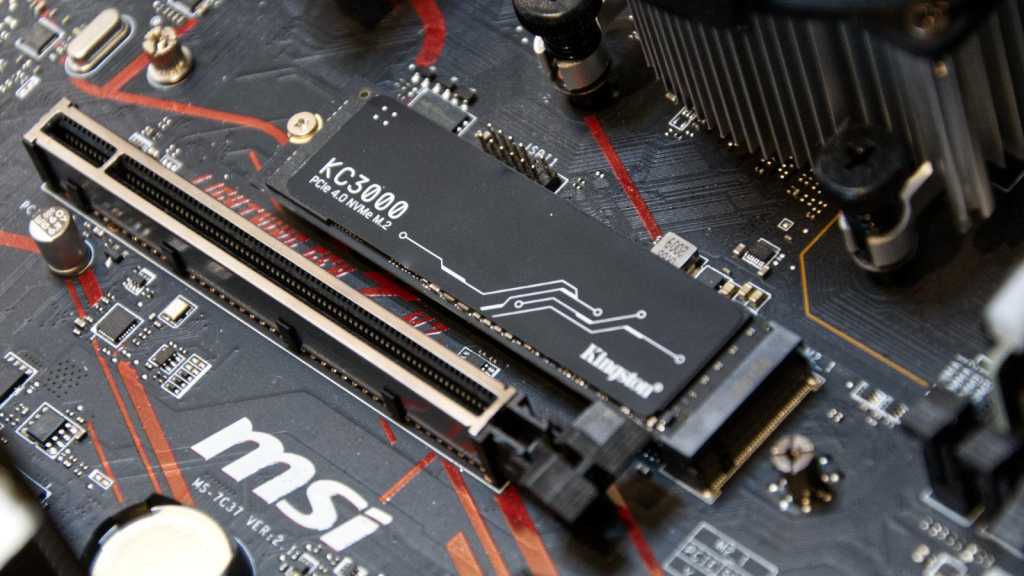 Kingston combines the best of parts by Phison and Micro to deliver a high-performance NVMe for both PC and PS5 owners. Sporting a dynamic cache solution designed to use up to a third of the total capacity to maintain high write speeds for longer.

Being a little late to the PCIe 4.0 NVMe party, Kingston gets the advantage of not making the same mistakes as others, balanced against not having products to sell.

Looking at the specifications of the KC3000 range, the designers wanted to deliver a premium solution that was equal or better than any other retail NVMe, at least in raw performance terms.

Given how the NVMe market has adjusted to inconsistent supply chains and the additional demands that games console owners are creating, is the KC3000 poised to steal the performance crown from Seagate and its FireCuda 530?

Aesthetically, the KC3000 looks identical to most 2280 sized NVMe drives.

Kingston has chosen to put a heat spreader on one side and a label on the other obscuring the surface-mounted silicon. Now a common practice, these coverings avoid awkward conversations when makers change the NAND supplier or other discrete components, and its customers notice.

With the supply issues that all electronics makers have experienced over the past two years, I should cut Kingston some slack on this point unless they also change the quoted specifications without mentioning it.

I can say with more certainty that under those labels is a Phison PS5018-E18 PCIe 4.0 controller, the same popular silicon used in the Seagate FireCuda 530, Crucial P5 Plus and Sabrent Rocket 4 Plus.

This chip is fabricated by TMSC using a 12nm process, and as has been widely reported, this chip maker recently put its prices up by 20%. The other critical part of this design is Micron’s 176L TLC NAND modules, and depending on the size of KC3000, these come in slightly different package plans.

Reading between the lines of the quoted speeds, the 512GB model has a package layout that cuts the parallel write operations by half, but the 1TB, 2TB and 4TB all have a similar NAND structure.

However, the increase in capacity has two other notable consequences. It increases the TBW (Total Bytes Written) for the modules, but it also raises the power demands made by the drive on the host system.

While the increase in TBW is welcome, with the 4TB model offering a staggering 3.2PBW (yes, that’s petabytes), the power consumption ramp is less fantastic news. The 512GB model consumes just 4.1W, and each capacity bigger than that increases those demands in a linear profile that sees the 4TB drive consume 10.2W while writing.

That’s likely to make the drive warm up significantly over a prolonged operation, and the low-profile graphene aluminium heat spreader used on the KC3000 can only cope with so much. The maximum quoted operating temperature is 70C, and a degree above that and thermal throttling will automatically occur.

For those wanting to push their system hard, it might be worth using active cooling or replacing the factory-installed heat spreader with a more substantial design.

One potential advantage of the factory included heat spreader is that it allows the drive to be installed in a Sony PS5 without any issue.

Even if it needs a heat spreader, Kingston wasn’t swayed from offering a five-year warranty on all models in the KC3000 series and quoting the previously mentioned massive TBW numbers.

The only missing piece in this jigsaw of technical triumph is that this drive doesn’t support hardware encryption. I’m unsure why it is missing since the Phison PS5018-E18 has this feature available.

Even on the smallest model, those numbers represent a tremendous amount of writing, as a 400TB limit would only be reached at near 22 years if you wrote a full 50GB Blu-ray to the drive every day.

Those editing UHD resolution videos might write much more than 50GB per day. However, the TBW on larger capacity models should handle hundreds of GBs per day and still give many years of reliable service.

Given that it isn’t practical to test the review hardware to the point of failure, as it would take nearly a month at full speed to write 1.6PB, these quoted numbers must be taken on faith. The likelihood of running into the actual limits is still improbable for average users and remote even for those that bludgeon their systems daily.

For those wanting even greater TBW, the Seagate FireCuda 530 offers 5,100TB on its 4TB capacity drives, using the 3D TLC NAND.

I’ve seen what the Phison PS5018-E18 can do before, specifically in the Seagate FireCuda 530, and it is an impressive controller.

One function of this controller is to dynamically allocate part of the drive to an SLC cache, putting off the evil day that the user is confronted with true NAND performance, dramatically below the 7,000MB/s headline numbers.

The KC3000 uses the same logic, but where it differs from the Seagate implementation is that it is less conservative about how much NAND is relocated to SLC cache operations, with up to a third of the drive being used for this purpose.

To explain, the NAND used in this drive has two modes, the fast SLC and the much slower TLC mode, that takes up a third of the space of data written in SLC. Once all the remaining drive capacity has been used in SLC mode, it must recover this space into TLC mode to make room to continue writing.

This is a balancing act because while this approach does allow the drive to accept write data for much longer before the cache is saturated, performance will suffer more dramatically as the drive approaches being full.

At the point where all the remaining space is used for SLC, performance drops to around 1,500MB/s as it converts SLC space into TLC. That’s a very respectable number, as I’ve seen other designs drop to 400MB/s once they exhaust their cache.

Obviously, as the free space on the drive reduces, we move closer to the point at which the SLC cache is saturated and overall performance will suffer. As a rule, using up all the space on an SSD drive is generally a bad plan, and with the KC3000, this logic has never been truer.

My review KC3000 was the 2TB model, and therefore this device should offer the very best performance to expect from this series, matching the 4TB model in most aspects.

Kingston quotes 7,000MB/s reads and writes for the review sample, and within the margin of error, it hit those values in most synthetic benchmarks.

CrystalDiskMark 8.0.4 in the default profile achieved 7,405MB/s reads and 6,908MB/s writes, numbers that exceed the Seagate FireCuda 530 in read and are close behind in write performance. Looking at a range of profiles and file sizes, the results of the random tests were consistently high.

Where things are less rosy is in the power consumption department. Under stress, the 2TB model can pull a significant number of watts and convert some of that power into heat.

It’s worth saying that the power efficiency of the new Micron 176L NAND is substantially better than its older 96L variety. But power management still isn’t as effective as on the Seagate FireCuda 530 or Samsung 980 Pro.

A weakness of the KC3000 is that it consumes more power than either of those products when supposedly idle, something that could impact those using it in a laptop.

Due to the power consumption and how little airflow some laptops offer, I’d contest that the KC3000 is better suited to desktop installations as a rule.

With TSMC having hiked its costs for NAND, we’re now seeing this ramping through to retail products, unfortunately.

At most capacities, the KC3000 undercuts the Seagate FireCuda 530 range, but the 4TB model is more expensive than the Seagate equivalent.

Those looking for cheaper options with similar performance profiles don’t need to look too far. The Mushkin Gamma Gen 4.0 4TB is under £700, and the new Corsair MP600 PRO LPX 4TB is £744.99.

Cheaper options are available from Sabrent, but these don’t offer the equivalent write speeds. However, it does offer 8TB capacity drives that almost no other brand can match.

See our chart of the  best SSDs to see what other options you have.

If it wasn’t for some of the cheaper PCIe 4.0 SSD offerings, the Kingston KC3000 might be worth the relatively high price that its maker is asking. But given recent TSMC price hikes and other component price pressures, maybe we all need to accept that technology is going to cost more from this point than we’ve come to expect in previous decades.

Alongside the price, one area that could be better is idle power consumption. While this won’t impact desktop users (beyond minor electricity bill impact), it might hit laptop users looking to conserve battery power.

Another notable complaint is the lack of hardware encryption, a feature that competitors like Seagate and Samsung include in their flagship NVMe drives.

Those points aside, this is an excellent design that performs exceptionally well under challenging use profiles, and its thin heat spreader design does allow it to fit into the Sony PlayStation 5.

The SLC cache methodology used here is fascinating, as it provides the maximum advantage in writing speed over the long haul. Unless someone devises NAND that can cope with these speeds without a cache, the approach taken by Kingston is probably the best for TLC NAND at this time.