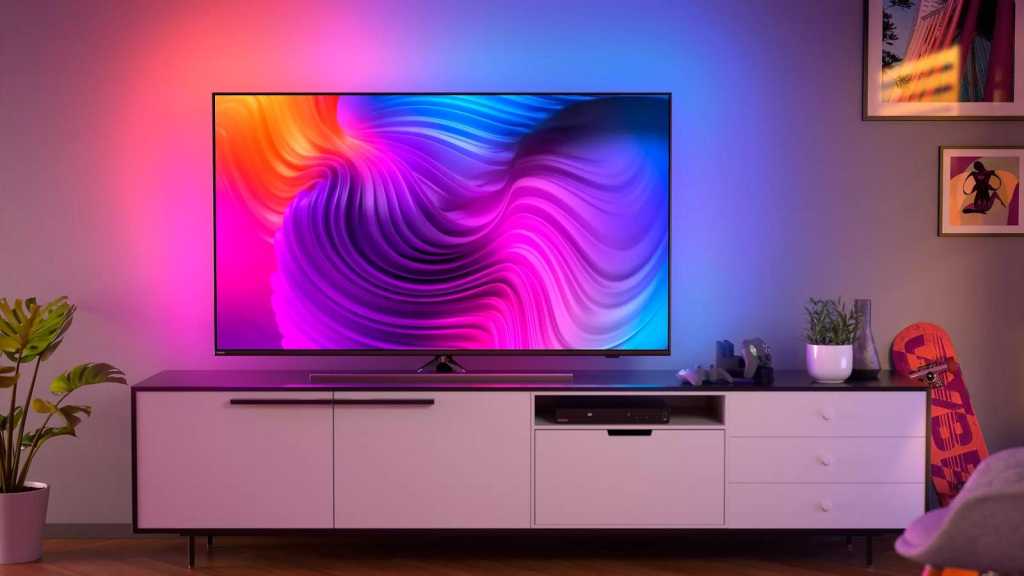 The Philips 8506 is a good looking mid-range LED TV, with a generous feature roster. Picture quality, Ambilight and copious streaming options make it a simple choice if you don’t need 120Hz gaming.

Philips’ 8506 is The One, which is Philips marketing parlance for its mid-price LED TV crowd-pleaser. It’s designed to tick all the boxes that most buyers will be looking for in a new flatscreen – value, technology and performance – without overcomplicating things.

The moniker certainly gives the set a lot to live up to, but this TV largely delivers on its promise. If you are looking for a screen that delivers maximum bang for your buck, this 8-Series star would indeed be The One.

It’s bright enough for daytime TV, offers decent movie contrast and doesn’t disgrace itself when it comes to low input gaming either.

The One looks surprisingly upmarket, although close inspection reveals it to be a bit plasticky. Still, the silver-painted panel edging is more presentable than rival cookie-cutter cheapies. The rear is spotted with three-sided Ambilight, Philips popular mood-lighting technology.

Connectivity is good for a mid-range model. There are four HDMI inputs, of which HDMI 2 is certified eARC, with the three remaining modes all ARC enabled. There’s no support for 4K 120fps (aka 120Hz) playback support.

We also get two USB ports, optical digital audio out, Ethernet as well as onboard Wi-Fi and Bluetooth, plus both terrestrial (Freeview Play) and single satellite tuners. There’s also a CI card slot if you have a need.

The remote control isn’t the same premium pointer found higher up the Philips range, but it’s slim and feels good in the hand. Dedicated buttons are provided for Prime Video, Freeview Play, Netflix, Rakuten TV, Google and of course Ambilight.

The 8506 is built on the Android TV smart platform and Freeview Play – a familiar and formidable combination.

The former delivers a huge variety of top (and second) tier streaming apps, including Netflix, Prime Video, Apple TV, Rakuten TV, Disney+, and Pluto TV, while Freeview Play guarantees a full suite of mainstream catch-up TV apps (including BBC iPlayer, ITV Hub, All 4, My5, UKTVPlay), along with a roll-back programme guide to search for shows you might have missed over the past week, as well as copious box sets.

Content curation from the Android Home page is comprehensive and sprightly; browse the Freeview Play rail and you’ll be served video thumbnails of current shows.

Naturally, the TV also has Google Assistant built-in, and Works with Alexa, for voice control. You can also cast straight from your smartphone, using Chromecast.

Picture performance is where The One ultimately has to prove itself, so it’s good to report that this 8-series LCD LED screen manages to avoid many of the traps that plague similarly affordable flatscreens.

It’s big on colour and vibrancy, and really smashes it when it comes to presenting fine detail, making a fabulous job of 4K fare from streaming services. Off-axis viewing is good, with minimal loss of colour and contrast when you view from the side.

Phillips menus are generous to a fault when it comes to options. The P5 engine in this model predates the more AI-inflected updates seen in the brand’s higher-end models like the OLED+936, but it still has tricks up its sleeve.

Hunt through the Advanced settings and you’ll find plenty to tweak, including Picture Clean, which offers up variable noise reduction, HDR upscaling for SDR sources, and a light sensor which is used to reduce power consumption during dark lighting conditions.

The screen’s black level performance is surprisingly good for an LED screen of this calibre; blacks are convincing and not overly greyed out when viewed in low light.

HDR support is good with The One compatible with Dolby Vision, HDR10+ and HLG.

Audio is unremarkable. The set’s 2x10W stereo sound system does a robust job when it comes to volume and tonal balance, but the set still warrants an upgrade. The good news is that it’s Dolby Atmos compliant and can squirt a 3D audio bitstream out to a waiting Dolby Atmos soundbar or AV receiver, for fully immersive 3D sound.

You can find the smallest model at Amazon while Currys is the best place to find a choice of sizes.

The model has no equivalent in the North American market, as TP Vision, which makes this set, does not hold the licence for Stateside distribution. In Australia, the nearest model to this appears to be the 7-Series, available in 55-, 65- and 70-inch screen sizes (55PUT7805, 65PUT7805 and 70PUT7805).

Check our charts for the best budget TVs and best TVs for more options.

I rate the Philips 8506 a top-notch mid-range buy with a compelling feature spread. The fact that it lacks High Frame Rate 4K 120fps support shouldn’t really surprise at this price point, but gamers will still appreciate its low latency at 60Hz.

Picture quality is good. Steer clear of the Standard picture preset, and set the HDR default to Vivid and you’ll enjoy punchy, dynamic pictures from both HD and 4K sources.

It’s bright enough for daytime viewing and nuanced enough for midnight movie marathons. Engage full-blown Philips motion interpolation at your peril during the latter though.

Usability is largely bomb-proof, thanks to Freeview Play and a tried and tested Android TV OS. The final sweetener, as usual, is Ambilight.

On a mid-range budget? This is The One to beat.