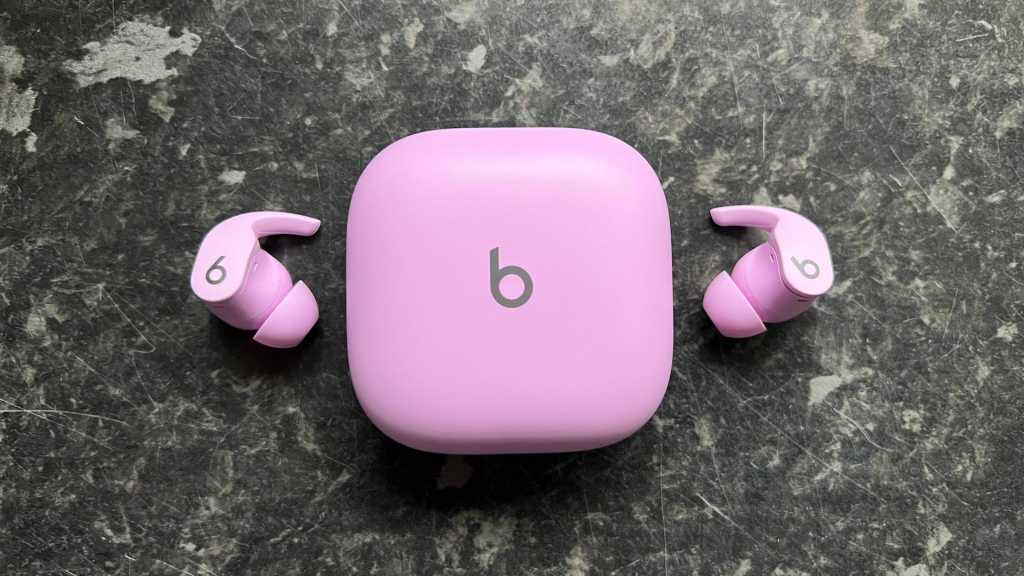 The Beats Fit Pro offer an AirPods Pro-esque experience with a fitness focus, sporting wingtips that’ll keep the buds securely in place, bass to keep you going through long workouts and crucially, better Android support than Apple’s high-end buds. The case is on the large side and it feels flimsy in places, but that’s a small price to pay for great performance.

The Beats Fit Pro are here to offer an AirPods Pro-like experience without the Apple branding, boasting key features like ANC and Dolby Atmos support alongside boosted battery life and a smaller case than previous Beats true wireless earbuds. The best part? Unlike Apple’s premium buds, many of the features and functionality are available on iOS and Android.

Could these be the Beats to beat? I’ve spent some time with the Beats Fit Pro, and here’s what I think.

The Beats Fit Pro are the latest in a long line of fitness-focused buds from the Apple-owned company, with the Beats Fit Pro looking to offer an AirPods Pro-esque experience with a more secure fit ideal for fitness fanatics.

the Beats Fit Pro buds are relatively compact considering the amount of technology on offer, with soft silicon wing tips helping keep the bud securely in place. Fit is an important aspect (the clue’s in the name!) so there are three sets of ear tips in the box to help you find the best seal possible, but interestingly, the same can’t be said for the wingtips.

Unlike sporty alternatives like the Adidas RPD-01s, the wingtips aren’t swappable, and while they’re perfectly shaped for my ears, that may not be the case with everyone. The wingtips extrude farther than others I’ve used, tucked away in the upper fold of my ear in use, but the result is an impressively secure fit.

In fact, I can’t overstate just how good the fit is. Once I found the right size of ear tips for my ears, the Beats Fit Pro stayed securely in place no matter what – and I really tried to get them to come loose. The buds stayed in place without the need for adjustment during a recent 5K run, and even shaking my head violently doesn’t cause an issue.

Even if you’re not overly active on a daily basis, it’s such a weight off the mind knowing you don’t need to constantly fiddle with the buds to get the best fit and sound possible.

Despite the compact dimensions, the buds feature a small button hidden beneath the Beats logo. I’m not usually a fan of physical buttons on earbuds because they tend to push the bud farther into the ear in operation, but the weak resistance from the buttons on the Beats Fit Pro means that’s not an issue.

Simply lightly press the button in-ear and it’ll play/pause your music, and hold the button to switch from transparency to ANC. As with most alternatives, these shortcuts can be customised to access features like volume control and your smart assistant based on your personal preferences.

But while the buds are compact, the same can’t be said for the accompanying charging case. It measures both thicker and wider than that of the AirPods range at 62 x 62 x 28.5mm, though it’s still just as lightweight at 55g. It’ll fit in a pocket just fine, but it’s more noticeable than the small dimensions of the third-gen AirPods.

Size aside, the case just feels cheaper than the buds, with a lid that feels light and flimsy when opened. Rounded edges, magnetic earbud alignment and a matte finish help pull it back, but it doesn’t feel as solid or robust as other TWS buds on the market.

The Beats Fit Pro are available in four colour options: Beats Black, Beats White, Sage Grey and Stone Purple, with the latter supplied for review. The soft purple hue is a personal favourite of mine, offering an interesting pop of colour alongside the more understated flavours available, but that’s certainly subjective.

While the Beats Fit Pro has a distinct design, the smarts are on par with Apple’s high-end AirPods Pro, featuring the same impressive Active Noise Cancellation as the flagship buds that truly quietens the environment – but more on that in a bit.

There’s also a Transparency mode that essentially does the opposite, utilising the microphones to funnel in environmental sound to make you more aware of your surroundings.

I’m not sure what magic Apple is using to implement the tech, but the effect is far beyond that of most other audio manufacturers with impressive positional sound that’s easy to pick up on, even when playing music at loud volumes. If you exercise outdoors, it’s a game-changing feature that’ll make you feel much more safe and secure.

Other true wireless earbud features are present and accounted for here too, including quick pairing functionality, ear detection with automatic play/pause and the ability to remap the external button on each bud, making for an all-around premium experience uncompromised by the fitness-first focus of the Beats Fit Pro.

If you use an iPhone, you’ll get additional AirPod-inspired functionality like automatic device switching, audio sharing and even the ability to locate lost buds via the Find My app. There’s also support for Dolby Atmos with dynamic head tracking, bringing the immersive listening experience to your daily workouts – more on that in a bit.

But what truly sets the Beats Fit Pro apart from the AirPods Pro, aside from the design, is that many of the features are available for both iOS and Android.

If you own an Android and download the Beats app from Google Play, you’ll get access to features including one-touch pairing, custom controls, battery levels, firmware updates and even a Fit Test.

You’ll still need an iOS device for Find My, Automatic Switching and Audio Sharing functionality, but it’s closer to the ‘Apple’ experience than ever before. Now, can Apple do the same thing with AirPods please?

Being a Beats-branded fitness-focused pair of wireless earbuds, it should come as no surprise that the buds prioritise powerful bass – but somewhat surprisingly, it doesn’t come at a compromise to overall sound quality.

The bass on offer is deep, tight and surprisingly punchy, perfectly suited to fast-paced Hip Hop and Dubstep. Though it doesn’t have the same impact as a pair of over-ear cans, you can still feel the bass. Crucially, that powerful bass doesn’t interfere with the warm mids and crisp highs that make vocals sound crystal clear, with great clarity across the range.

That’s coupled with positional head tracking that’ll shift the direction of the audio when you move your head for a more natural listening experience. Sound comes from all around you, allowing you to appreciate your favourite tracks in a new way and even notice a detail or two you’ve not picked up on before.

It really is a transformative experience, but crucially, it’s one that’s exclusive to iOS devices – Android fans miss out on the head tracking magic.

As noted earlier, one of the key features of the Beats Fit Pro is active noise cancellation. While ANC on wireless earbuds can’t compete with the quietening on offer from over-ear headphones like the Sony WH-1000XM4, Beats-owned Apple has a bit of a reputation for impressive ANC tech in its AirPods Pro.

Thankfully, it seems that the Beats Fit Pro utilise the same tech, with the same impressive active noise cancellation on offer. It won’t completely silence the environment, with dulled sounds often leaking through, but it’s noticeably quieter – even without music playing.

With your favourite tracks blaring, it’s unlikely that you’ll hear anything but the loudest environmental noises – like the hiss of a passing bus – making them ideal for the morning commute as well as an outdoor run.

When it comes to battery life, the Beats Fit Pro aren’t exactly industry-leading, but it’ll suffice for most users. With six hours of life from the buds with ANC enabled, there should be plenty of charge for even the longest workouts, and there’s an additional 18 hours in the charging case.

But what happens if you do lose charge mid-way through a workout? That’s where Fast Fuel tech comes into play, providing up to an hour of playback from just 5 minutes in the charging case.

The case itself is charged via USB-C (a nice change from Lightning on the AirPods) and it’ll go from flat to full within a couple of hours in testing, but it’s worth noting that wireless charging isn’t available here.

If you’re using an iPhone, you’ll also benefit from battery life integration within iOS, allowing you to keep tabs on the charge both in the buds and the case as you use them. You do get a similar feature on Android, but only from the aforementioned Beats app, not directly within the Android OS itself.

The Beats Fit Pro come in at £199/$199, which may seem steep, but they’re £50/$50 cheaper than the AirPods Pro with similar (if not better) audio performance. At that price, they’re in line with the likes of the Galaxy Buds Pro and NuraTrue, but there’s enough on offer to make the Beats Fit Pro a compelling buy.

If you’re interested, you can buy the Beats Fit Pro from the likes of Apple, Amazon and Currys in the UK, as well as Apple, Amazon and Best Buy in the US. To see how the buds compare to the competition, take a look at our selection of the best true wireless earbuds.

The Beats Fit Pro are a phenomenal pair of fitness-focused earbuds that don’t scrimp on sound performance or smarts to create a compact, secure fit.

The buds sit snugly in the ears, with three sets of eartips in the box to create the best seal possible, although the inability to swap out the wingtips could be frustrating for some – while it fit my ears perfectly, it might not be the same story for everyone.

Regardless, those wingtips keep those buds nice and secure, even during the most intense outdoor workouts. I’ve yet to feel the urge to reposition the buds during longer listening sessions, and that’s something I can’t say about many of the true wireless earbuds I’ve tested over the past few years.

The buds are tailored towards bass performance – unsurprising for a Beats product – but it’s more controlled, not overpowering the mids and highs like older Beats products I’ve used. I enjoy listening to acoustic tracks just as much as bass-heavy Dubstep, with versatile sound suited to a range of genres.

It also benefits from Apple’s AirPods smarts, including the company’s stellar Transparency and Active Noise Cancellation mods, Dolby Atmos with head tracking, one-touch pairing and much more – and unlike Apple’s AirPods, there’s an app for Android users to access much of the same smart tech. There are still some features unavailable on Android – like Find My – but it’s a much better experience than using AirPods on Google’s OS.