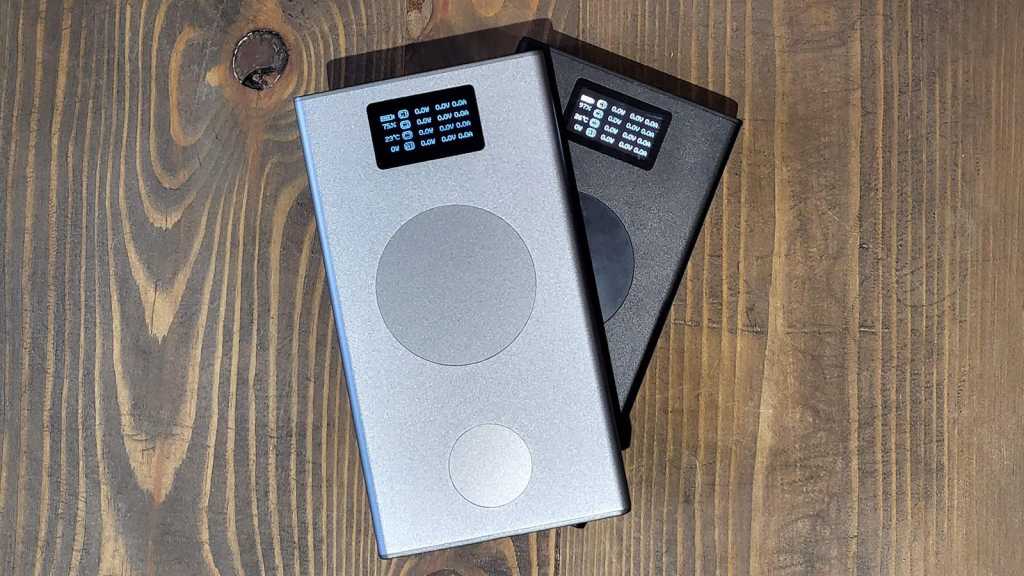 The fastest charging speeds and excellent functionality make these graphene-composite power banks the most capable we’ve ever tested – if you can afford them.

Our biggest problem with high-capacity power banks is that they’re always empty when you want to use them, simply because they can often take too long to recharge – by the time you remember to do so, it’s usually too late and you’re walking out the door. But for power banks that have graphene-composite technology inside, this gripe is a non-issue: graphene-composite can be charged at much lower temperatures than lithium-polymer, which means it can also charge significantly faster.

Fully charging a standard 25,000mAh lithium-polymer power bank could take three or four hours if it has a well-specced Power Delivery input and compatible charger, but nearly a full day without.

In our tests, the Flash Pro actually got to 99% in less than 50 mins, and at 70 mins it was trickle-charging at about 20W and still showing 99%. Five minutes later it hit 100% and charging stopped automatically. During charging, a high-pitched squeal could just be heard, though it wasn’t loud enough to be annoying unless you were sitting right next to it.

To be fair, it’s not unusual to pay more for new and emerging technologies and, although this isn’t a completely new technology, graphene-composite power banks are by no means commonplace. Both Flash Pro and Flash Pro Plus contain five lithium-polymer graphene-composite battery cells that have been designed in partnership by Tesla and Panasonic.

(These are the same batteries used by the Chargeasap Flash 2.0, which features in our best laptop power banks round-up. You may also like our collections of the best power banks, and the best USB-C Power Delivery chargers.)

Graphene-composite batteries have a lifespan four times longer than lithium-polymer, rated for 2,000 cycles, which means they could keep going at full-pelt for five years or more. There’s also a dual NTC thermistor inside to monitor and control the temperature, and full FC, CE, ROHS and MSDS certification – when you’re talking about crazy charging speeds such as these, safety is a priority. You’ll also get a two-year warranty, and since these 92.5Wh banks fall under the 100Wh limit they are safe to take onboard a flight in your hand luggage.

These power banks have more to offer, too, with the ability to charge up to five (Flash Pro) or six (Flash Pro Plus) devices at once, and a neat 1.3in OLED display that gives you real-time data on battery percentage, temperature, and input/output readings in Watts, Volts and Amps. There’s also passthrough charging, which means you can charge all those devices and the power bank itself at once.

At least in terms of functionality and performance, Flash Pro and Flash Pro Plus are the most capable power banks we’ve ever tested.

What is the difference between Flash Pro and Flash Pro Plus?

Both feature four USB ports: three USB-C PD 3.0 ports rated at 100W (also acts as a 100W input), 60W and 20W, and a 50W USB-A port that supports Quick Charge 3.0 and SVOOC, meaning it will support the proprietary fast-charging standards of the likes of OnePlus, Oppo, Huawei and Vivo. These USB ports operate in exactly the same way, whether you’re charging an Android phone or an iPhone or any other device.

The difference comes in the wireless charging capability. The Flash Pro has a single Qi charging pad on its top surface that will charge an Android phone at up to 15W, and an iPhone at up to 10W. The Flash Pro Plus instead has a MagSafe pad that can charge an iPhone 12 or 13 at up to 15W, but an Android or older iPhone at a maximum of 10W. Flash Pro Plus additionally has a magnetic Apple Watch charger that operates at 5W, while Flash Pro is not compatible with Apple Watch at all because it has only a single-coil wireless charger. (Also see: What is MagSafe, and Best MagSafe accessories for iPhone)

We often focus on how fast power banks are able to deliver a charge, but when it comes to low-power devices such as activity trackers and earbuds the opposite is also important. Whereas some power banks will fail to detect their draw and automatically switch off mid-charging, both Chargeasap devices support low-power devices.

While they charge much faster than standard lithium-polymer power banks, these Chargeasap devices are no more efficient. As with most banks, you can expect to get somewhere around 70% efficiency, give or take a few percent. With a 25,000mAh capacity, this means roughly 17,500mAh is available to your devices.

To work out how many times this would charge your device, just divide by the battery capacity of your own device. My Galaxy Z Flip 3, for example, has a 3,300mAh battery, so I can expect around 5.3 charges from the Flash Pro or Flash Pro Plus.

Over time, energy stored within a power bank is lost. Chargeasap claims that over a period of 395 days, the average discharge rate is around 12mAh per day. Our testing period was not long enough to confirm this.

It’s fair to say that we’re impressed with the performance and functionality of the Flash Pro and Flash Pro Plus, but there is room for improvement.

Our review samples were not provided in sealed retail boxes and had clearly been handled previously, which unfortunately meant our first impressions were somewhat marred by the fingerprints and dirty marks visible on the casing. This was particularly noticeable on the OLED display and wireless charging pad, which we also noted lacked grip in use – while the Flash Pro Plus benefits from magnetism, it’s quite easy to knock a wirelessly charging smartphone off the Flash Pro.

These thoughts were immediately followed by some dismay at the design. When it comes to devices as powerful and capable as these it should certainly not be all about the design, but when you’re paying $300 you would also like something that looks good.

The aluminium housing – which is durable and also helps to dissipate heat – is a cut above the matte black plastic you often find housing a power bank, and Chargeasap gets major Brownie points for the OLED display. But the blocky and rectangular design is oversized, awkward in the hand, and heavy – and the white type found on either (matte black plastic) end denoting the device specifications makes it look cheap. This is a legal requirement, and necessary for ease of use, but some power bank manufacturers do a better job of making that information appear less in your face.

As a guide, most 25,000mAh power banks weigh between 350- and 400g. There is so much tech crammed inside here that the Android model weighs 577g and the Apple version 583.5g. At 158.5x87x28.5mm they are no shrinking violets, either. Chargeasap refer to the Flash Pro and Flash Pro Plus as ‘pocket-sized’ devices, but you’re going to need deep pockets and a seriously heavy-duty belt to keep your trousers from hitting your ankles.

We can overlook our gripes with the design and build of the Chargeasap Flash Pro and Flash Pro Plus because the super-fast-charging graphene-composite battery tech and the range of high-performance outputs make them the most capable power banks we’ve ever tested – even faster than we anticipated.

They are expensive, sure, but with four times the lifespan of a standard lithium-polymer battery you won’t find yourself buying a new one any time soon. It would seem better value if a mains adapter and cable were included, given that most people won’t have 100W versions lying around their homes.