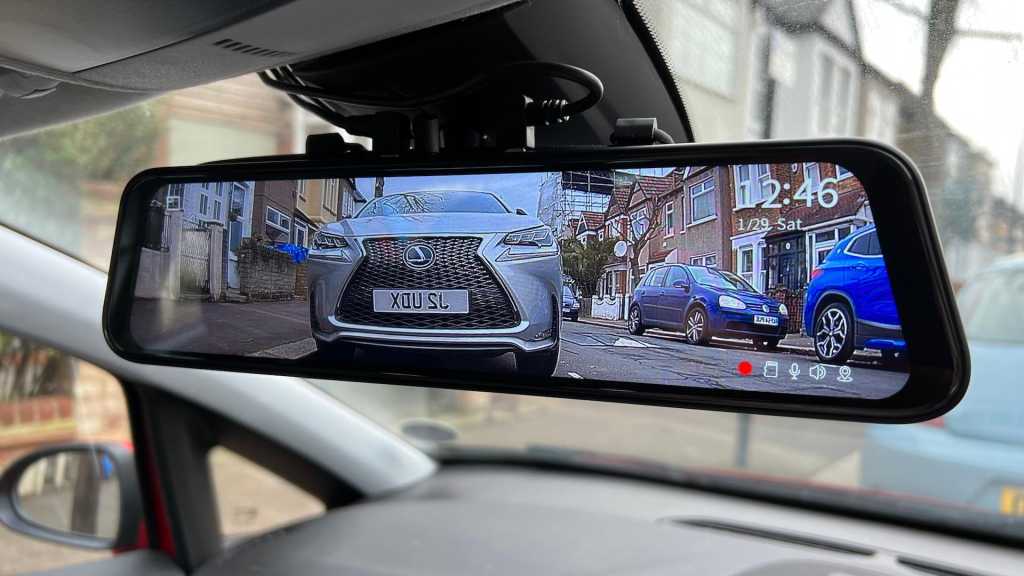 The Vantrue M2 could use a bit of TLC on the software side, but the hardware is near faultless and the ability to use the rear camera as a reverse parking camera is a very handy bonus.

Dash cams come in all shapes and sizes and that’s certainly true of the Vantrue M2. It’s unlike others we’ve reviewed because it mounts on your car’s rear-view mirror and comes with a rear-facing camera that can double as a reversing camera – handy if your car doesn’t already have one.

Plus, the fact the M2 hangs off your rear-view mirror makes it harder to spot than a standard dash cam, and these things – plus a few other tricks – make it worth the premium price.

Are you ready to ditch your rear-view mirror for a smart one? Then read on.

The Vantrue M2 is designed to clip onto your existing rear-view mirror and display the live feed from the rear camera – a 21st-century spin on the rear-view mirror, if you will. Though it sounds complicated, it takes no more than 10 seconds to secure it into place using grippy rubber straps.

The device’s touchscreen measures 12 inches across, making it bigger than most cars’ rear-view mirrors, and this was the case with my 2016 Vauxhall Corsa. It’s not so big that it obscured my vision when driving, though.

The extra width of the rear-view mirror is required so the 1440p 148° camera can get a view of the road ahead. The angle can be adjusted, although the range of motion is fairly limited. Still, as long as it’s perpendicular to the road, you’ll have no issues.

The main unit plugs into your car’s 12V socket as most dash cams do, but Vantrue insists that you use the supplied cable and charger and not one that you might’ve been using with another dash cam.

Unusually, there’s a separate GPS receiver that plugs into the main unit, and this is designed to sit on your dashboard.

This is easier on certain cars, such as my Vauxhall Corsa, where the registration plate is mounted in the rear bumper. But if it’s on a hatchback or boot lid (tailgate), then routing the wires becomes a lot more difficult.

Note that you also need to connect a wire to the reverse light of your car in order to automatically activate the rear camera feed on-screen when you put the car into reverse. This also displays reverse parking guidelines. Installation is a little too involved for most people, but a local garage will install it for around £70 / $90.

When the unit powers on, you should see your rear camera feed along with key information such as time and speed, visible in the top-right of the display.

The 12in anti-glare IPS display is bright in use, utilising the rear-view camera to provide a rear-facing view unobstructed by the interior of the car. The 140° field of view is ideal, helping you to stay aware of cyclists and bikers in your blind spots as you’re driving.

Because of ultra-wide aspect ratio of the screen, you can swipe the display to move the view up or down depending on your preference – although never do this while in control of a moving car, of course. You’ve also got the option to automatically turn the display off after a few minutes, and you can turn it off manually via a button on the underside of the mirror if it becomes distracting.

Via a series of swipes and taps on the display, you can switch to a view of what the front-facing camera is capturing (perfect for getting the angle right during setup) or displaying both side-by-side.

There can be a bit of lag when navigating the various menus, and there’s some stutter when scrolling, but you that’s not something you need to do too often. Once everything is set up to your liking, you’ll rarely need to interact with it. I just wish the whole thing was a bit easier to navigate, with settings hidden away in obscure menus that should be easier to access.

It’s when you connect the rear-facing camera to your car’s reverse light wire that the Vantrue M2 truly shines. The mirror will automatically switch to the rear-view camera when you put the car in reverse. What’s more, it’ll automatically adjust the angle of the view to see more of the kerb behind you, and it’ll overlay parking guidelines to help guide you into place.

The guidelines are a great addition that can really help gauge spaces while reversing, but I wish the setup was more intuitive. As with other reverse cameras, the software doesn’t know the dimensions of your car and displays generic markings to give you a rough idea of distance. It’s down to you to adjust the shape and size to match your car.

Though it’s a bit of a pain, it is doable – I just wish that all the buttons used to adjust it were easier to understand, or better yet, the markings could be adjusted by moving them with your fingers.

Of course, the Vantrue M2 has many of the features you’d expect from any dash cam including a G-sensor that’ll automatically lock recordings to prevent them being overwritten in the case of an imapct, a built-in microphone to record audio and a parking mode.

The only big omission is a companion app for smartphones; the Vantrue M2 doesn’t have is a mobile app. If you want to review recorded footage, you can do this – awkwardly – on the display itself, but to share the footage, you’ll have to eject the microSD card and plug it into a PC or Mac.

There is a Vantrue app for PC and Mac that’s quite basic in design, but like most similar software for dash cams, you can browse through the clips and they’ll play as well as showing telemetry data like GPS coordinates and speed – ideal for insurance claims.

The most important factor is, of course, video quality. Fortunately there aren’t any huge disappointments in that department. The 1440p front-facing camera and 1080p rear-facing camera perform fairly well in most situations.

Let’s start with daylight; as you’d expect, both the front- and rear-facing cameras excel in well-lit environments during the day. There’s balanced colour, and the detail is impressive – just be sure to clean your windscreen first! 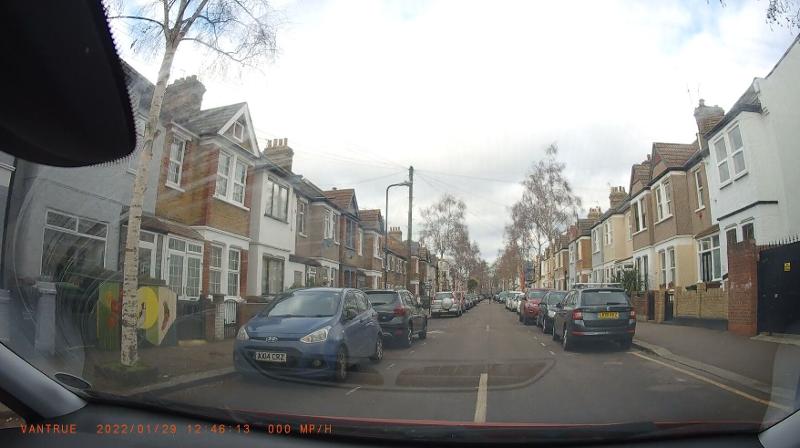 Front camera during the day

Regardless of the camera, you’re able to pause the video at any moment and pick out finer details like car registration plates from almost any angle – a benefit to using Sony’s Starvis sensor in both cameras. 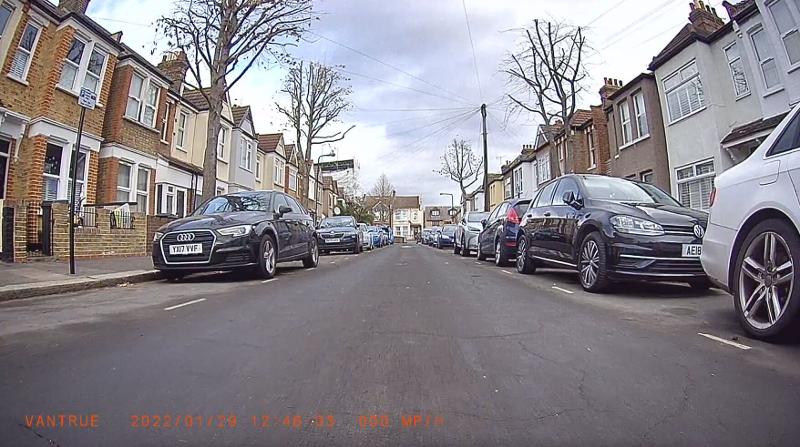 Rear camera during the day

It’s typically at night that dashcams begin to struggle, and while it’s not quite as good-looking as during daylight, the Vantrue M2 handles low-light environments very well – another benefit to using Sony’s sensors.

The front-facing camera retains more light than expected on dimmer roads, with noticeable detail and a well-tuned noise reduction system that leaves videos looking largely crisp. The issue is that bright headlights can – and often do – blow out the registration plate of oncoming vehicles due to the reflective nature of plates in the UK. 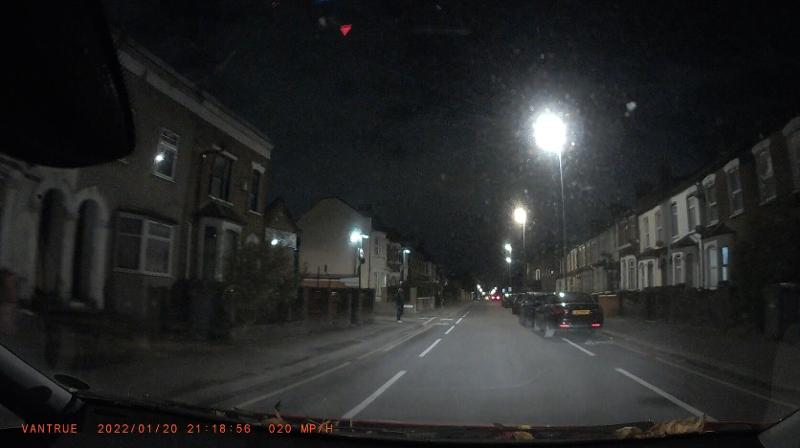 Front camera during the night

Though the rear camera drops to 1080p, you should expect a similar level of impressive performance. The drop in quality is more noticeable at night with noise reduction tech working a little too hard, but it offers great dynamic range and a clear, smooth image. 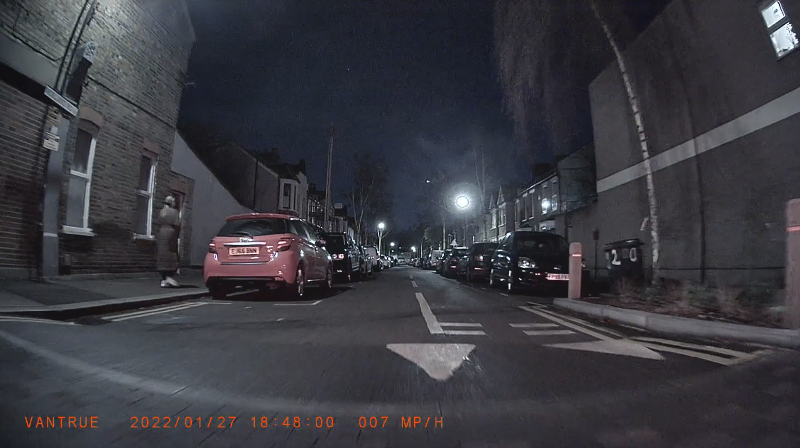 Rear camera during the night

It’s worth noting that, unlike much of the premium competition, the frame rate is capped at 30fps – likely to retain that impressive low-light performance. That’s fine for those that want to use the camera for insurance purposes, but it does limit the quality of videos recorded for other purposes, especially when compared to the likes of the 120fps Nextbase 622GW.

The bigger annoyance for some will be the format it uses; rather than the easily shared MP4, files are encoded in a .ts format. It makes sense as it encodes other data – including telemetry data – into the file, making it easier to view on a PC or Mac, and it saves files from being corrupted if power is lost during recording, but it’s difficult to convert into an MP4 without the use of third-party software.

Here’s a sample of clips taken from the Vantrue M2:

The Vantrue M2 isn’t the cheapest dual-channel dash cam around, costing £229.99 from Amazon UK and $249 from Amazon US at the time of writing, but with advanced features like a rear reversing camera, it’s a price that some will be happy to pay.

If you’re on the hunt for something a little different, our selection of the best dash cams might point you in the right direction.

The Vantrue M2 isn’t an ordinary dash cam, but that’s what makes it compelling. Mounting to your car’s rear-view mirror is easy and means it doesn’t obstruct your view of the road, or get in the way of the sun visors. It’s the first dash cam we’ve seen where the rear-facing camera can double up as a reversing camera – this is a real bonus, particularly if you struggle with parking.

Importantly, both cameras capture detailed video during the day and are even decent at night. Though, they suffer from the same issue all dash cams have with reflective license plates blowing out at night.

The bigger problems for some will be the .ts file format, which makes it difficult to share clips with others, and the fact that there isn’t an accompanying app for iOS and Android to easily access files.

Still, if you can get over that, and the relatively high price, the Vantrue M2 is a great dash cam that offers something truly different from the competition.