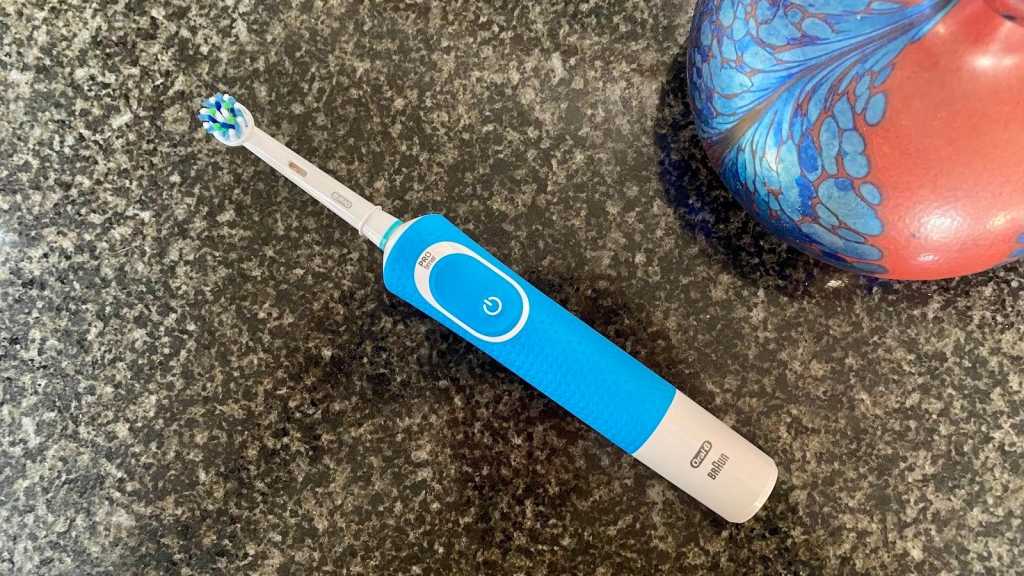 It’s a cheap brush for sure, but its weak brushing performance and lack of features make it hard to recommend. You don’t know how useful a battery charging light is until it’s not there.

If you’ve been browsing for a budget-friendly electric toothbrush, you’ve probably seen Oral-B’s Vitality model. Usually selling for around £20/$20, it’s Oral-B’s cheapest brush – although you may find other brushes at a similar price point if they’re discounted.

We’re reviewing it to find out if it’s worth buying, or whether you should save up for a pricier model.

But they are all the same model toothbrush, with the same motor and same features. The difference is in the handle colour and the toothbrush head – or heads – each comes with: either the standard CrossAction brush head or the 3D White brush head (which has a rubber polishing cup in its centre for targeting plaque and surface stains).

If you buy one of the Vitality Plus models, the Plus means it’ll come with an extra brushing head.

Once you know what the model names mean, it’s straightforward enough to buy the version you’d prefer. If they’re the same price, you’ll get the best value if you opt for a Vitality Plus. But bear in mind that the version you choose also affects which colour handle you’ll get. 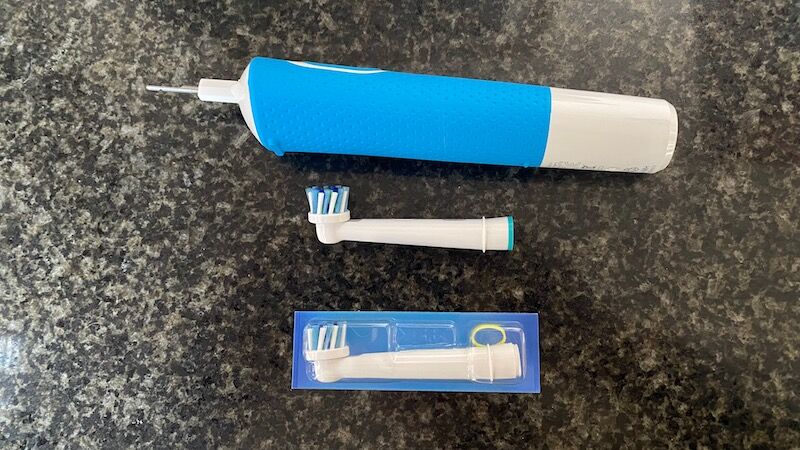 Also in the box is a two-pin charger for a shaving socket plug point. Judging from unhappy customer reviews on major retail sites, it seems that it’s less and less common to have a shaver socket in the bathroom. If you don’t have one, you’ll need to buy a three-pin plug adaptor. You can get a pair of them for £3.99 from Argos. 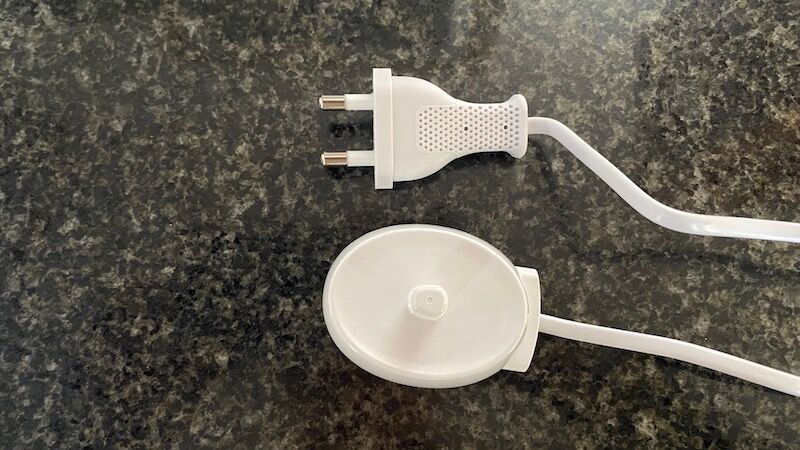 We wish that electric toothbrush manufacturers would offer a version of each brush that charges by USB instead. USB chargers are versatile, great for travelling and less bulky.

The Vitality has a white base and toothbrush head and the handle is wrapped in textured rubber. The handle is grippy and chunky: it’s easy to keep hold of, even if you’re a messy brusher and it gets wet.

The Vitality is compatible with standard Oral-B brush heads. These now come in different options, depending on whether you want to whiten, tackle plaque and so on. In general, we’d say that using your brush properly and regularly is more important than which brush head you use.

You should change your brush head every three months and you can currently buy replacements for £24.99 for 12 from Amazon, although the site’s Deal of the Day offer will probably be better value and, if you buy compatible generic brush heads, cheaper still – although you may be compromising on quality.

As you’d expect from its price point, this is a no-frills toothbrush. That extends to the fact that there’s no battery warning light and no battery charging light. I found the omission of the latter to be more of a problem. Set it on the stand and there’s no way to see if it’s charging properly. If you bump into it, you can’t tell if it’s still going. The only way to know if it’s charged is to start using it.

I found different estimates of the Vitality’s battery life but in my test it didn’t last for a week of ordinary use (brushing twice a day for two minutes). Perhaps this was because it wasn’t charged properly, but that was impossible to tell.

It was also very hard to judge how long it took to charge. I ended up plugging it in overnight and hoping it wasn’t jostled.

The Vitality has a single button operation. The button stands out from the handle and is easy to switch on and off. And that’s all you’ll need to do. There are no separate brushing modes to choose from.

What it does have is a timer that alerts you (with a double dip in the frequency of oscillations) every thirty seconds to move on to brush the next quadrant of your mouth. After two minutes, a four-beat buzz lets you know you’ve brushed for long enough.

A timer is one of the features we consider indispensable in an electric toothbrush. The other is a pressure sensor, which the Vitality doesn’t have. It’s pretty easy to brush too hard, which can damage gums and tooth enamel. If you have a brush with a pressure sensor, it’ll light up much more often than you expect.

But the biggest flaw of the Vitality is its brushing performance. It cleans via Oral-B’s 2D mechanism, which means it rotates and oscillates. But most Oral-B electric toothbrushes now have 3D performance: they rotate, oscillate and pulse, which makes for much more effective cleaning.

Switch the Vitality on after using another Oral-B brush and you’ll notice the difference right away. It’s weaker and gives a less intense and less effective clean. 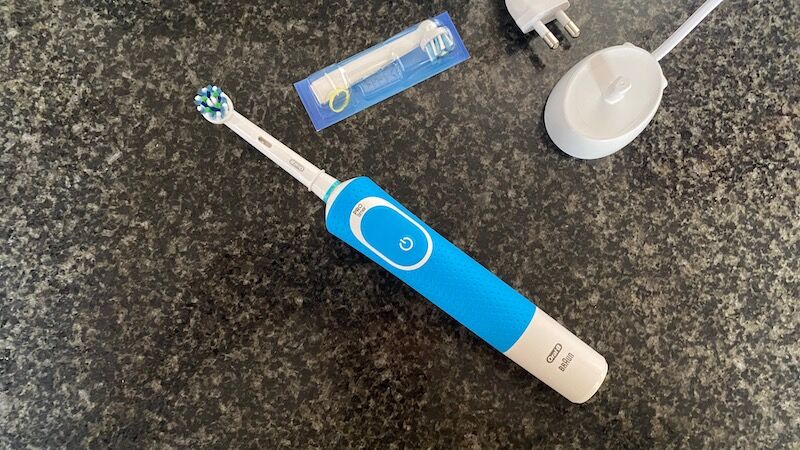 Although the RRP is higher, the Vitality usually sells for £20 in the UK and $20 in the US. If you want one, you shouldn’t pay more than that. The brush is widely available from online retailers, but prices between models can vary. If you’re thinking of buying, Amazon in the UK is selling all of the models for £20. Amazon in the US and Wal-Mart have similar offers of around $20.

The Vitality is better than a manual toothbrush and if it’s all you can afford, then it’s a decent option. However, its budget shows in its cleaning performance, which is much weaker than slightly more expensive Oral-B brushes. Plus, the lack of a battery light and pressure sensor make it hard to recommend. Is the brush fully charged and performing as well as it should? Without a battery light, it’s hard to say.

If you can stretch your budget a bit further or wait for a sale, we’d recommend taking a look at the Oral-B Pro 3 3000. Or, for more electric toothbrush options, check out our round-up of the best electric toothbrushes we’ve tested.