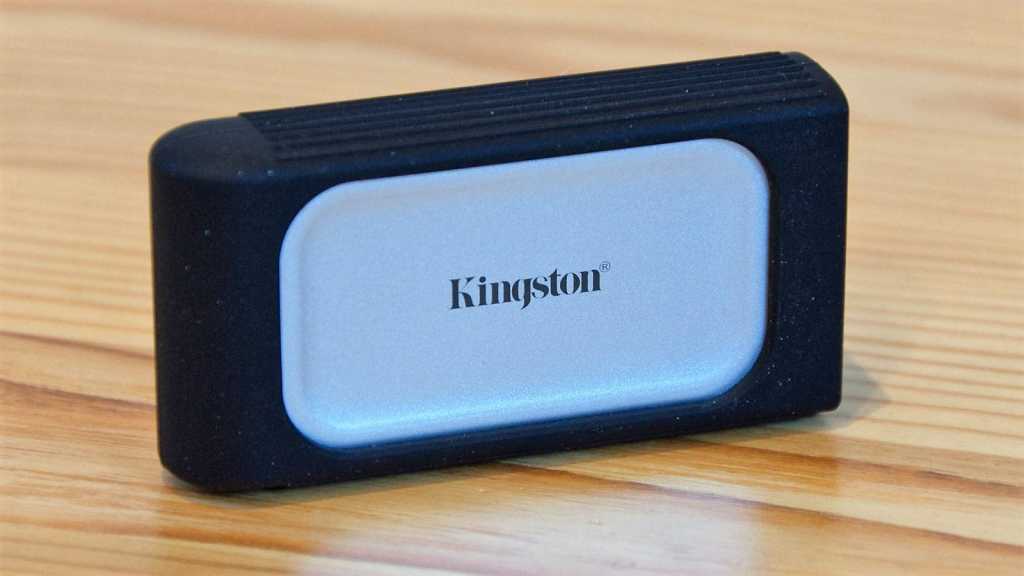 A great performer over short bursts for those with the elusive USB 3.2 Gen 2×2 ports. For everyone else, the XS2000 is a lightweight and pocketable USB-C SDD that is attractively priced to fly off the shelves.

External SSD storage has become a staple technology of the modern business user. For some, Cloud storage is too slow, mostly because the files are very large or they’re updated too often.

What users want is reliable, easy to transport storage with large enough capacities and, critically, rapid file transfers from the host system.

In an effort to get faster transfers, many have resorted to Thunderbolt technology, but the Kingston XS2000 reviewed here uses a lesser-known USB technology to achieve comparable results.

Based purely on the physical scale of the XS2000, it would appear reasonable to assume that inside is a Type-C NVMe SSD, although I’m happy to admit that I didn’t tear the review sample into pieces to confirm this assertion.

Measuring just 69.5 x 32.6 x 13.5mm without its protective rubber sleeve and just 28.9g, this is one of the most portable external SSDs I’ve seen. Ergonomically, it is ideal for anyone who travels to do business.

However, installing the rubber cover is a good idea as the outer case might look entirely metal, but it’s a combination of thin metal panels and black plastic.

In the box is the drive, a 20cm USB-C cable and the rubber sleeve. Disappointingly, Kingston doesn’t include an adapter to use the XS2000 with Type-A USB ports or any pouch to protect the drive and cable when not in use.

It also doesn’t have any software to sync between the host system and the drive, although there are many free and paid utilities available that can do that job for you.

Kingston is confident that the IP55 rating, making it resistant to limited water and dust encounters, is enough to keep the unit functioning and therefore offer a limited 5-year warranty with free technical support.

From what I’ve been told, this is the first portable drive to use the new Silicon Motion SM2320G controller that merges the USB and SSD controller into a single unified chip. The objective in combining these two functions is to reduce costs but also achieve better throughput overall.

Because the XS200 has a USB interface, you could use that space with any popular operating system if it is formatted to an appropriate file structure. By default, it is pre-formatted to exFAT, but you can easily change this to NTFS or EXT3/4 if those file systems suit your needs.

The drive doesn’t support hardware encryption, but you can use it with software encryption technologies if it carries sensitive information.

Where this unit diverges from the majority of external NVMe devices is that the USB interface on it is not only USB 2 and 3.0 backwards compatible (with a Type-A adapter, not included), but it is also designed to work with USB 3.2 Gen 2 and Gen 2×2.

I’ll get more into the implications of the last part of that specification in the performance section below, but support for Gen 2×2 is unusual.

Technically, Gen 2×2 is the truest form of USB 3.2, as Gen 1 is a rebranded USB 3.0, and Gen 2 was equally once known as USB 3.1. The marketing confusion these changes created when the USB consortium rebranded the interface are ongoing, but Gen 2×2 is the best performing version until USB 4.0 becomes available.

Kingston is promoting this drive as being very fast, and yes, under the right circumstances, it can read and write at more than 2,000MB/s. However, that statement does come with not an insignificant number of caveats that might curb your performance ambitions somewhat.

For those with a typical modern system that comes with USB 3.2 Gen 2 ports, the best speeds you are likely to see are in the region of 1,000MB/s or half the headline speeds.

That’s the maximum that the interface can move, since 10Gbits when boiled down, can only transfer about 1,000-1200MB before the bus is entirely saturated.

To get the double performance requires a Gen 2×2 interface, something that very few motherboards and systems come with. For my testing, I bought an Orico PCIe USB card (above) that supports Gen 2×2, an additional outlay of $49.

Using this solution requires a free X4 PCIe 3.0 slot on the PC, and therefore it isn’t anything that you can easily add to a laptop.

Once connected to the card, the XS2000 could achieve its full potential. Resulting in reads of 2,092MB/s and write of 1,881MB/s using CrystalDiskMark 8.0. Other tests put the limits at around 1,850MB/s and 1,720MB/s for reading and writing, at least over the short-haul.

The NVMe drive used in the XS2000 is of a type familiar to cheaper options where there isn’t any DRAM to cache writing, and instead, some of the NAND is allocated as an SLC cache. This methodology can work well, and it is normally only an issue if the system is doing random reads and writes, something that wouldn’t be normal for an external storage drive.

However, on the XS2000, the SLC cache appears to be relatively small (30GB), and once saturated, the underlying performance of the NAND memory is exposed, dropping write performance to below 400MB/s.

If you have very large files, maybe 4K video, and you dump those to the drive, then you might find that the transfer starts well enough but soon drops to a crawl. This limitation exists if you use Gen 2 as the problem is cache consumption, but the cache will be consumed more quickly on Gen 2×2 due to the speed of uploading.

If you’ve got 100GB or more to write, it might be that the total time taken is almost the same irrespective of using Gen 2 or 2×2 interfaces.

I also noticed in my tests that the drive does get notably warm when working hard, and if this were to carry on for prolonged periods, some thermal throttling might occur.

To be fair, I didn’t experience this problem, but SSD modules usually have smart electronics to avoid them exceeding thermal limits imposed by the designers.

My conclusion is that with the right interface, the XS2000 can deliver the headline performance Kingston claims, but like many NAND storage devices, it can’t sustain that sprint over longer distances.

You can buy it from the likes of Amazon, Ebuyer and Insight.

Those are reasonably competitive prices for a drive with this performance capability, being significantly cheaper than the SanDisk Extreme Pro V2 2TB ($329.99). Although SanDisk does offer a 4TB model that isn’t on the Kingston roster.

Check out our chart of the best portable SSDs for more options.

Overall, there is plenty to like in the Kingston XS2000, especially for those lucky enough to have Gen 2×2 USB ports.

Availability of that port is primarily the issue this product faces. Most systems don’t have this port on them since many hardware makers are banking on USB 4.0 and its 20Mbit bandwidth modes to deliver this level of performance when that interface becomes readily available.

From what I understand, USB 4.0 compatibility with the Gen 2×2 mode is ‘optional’, and without the option enabled, it could reduce this drive to Gen 2 (10Mbit/s) operations. But then, unless all the machines that you use this with have Gen 2×2 ports, you won’t get that speed all the time.

If we take the view that we don’t need Gen 2×2 compatibility, then there are lots of competitor products that are offering 1,000MB/s transfer speeds. Still, ironically most of them aren’t substantially cheaper.

Even if you only use it on one machine with a Gen 2×2 port, it might be worth using the XS2000 over an alternative design. For those who want the headline performance and longer sustained speeds, the external SSD designs should consider using Thunderbolt-compatible SSDs, like those made by Plugable.

Those designs cost much more than the XS2000 for the same capacity and require Thunderbolt ports, as they won’t work with USB. In terms of a cost-effective and compatible solution, the Kingston XS2000 ticks plenty of boxes, though I’d prefer Kingston to include a USB Type-A adapter in the actual box.