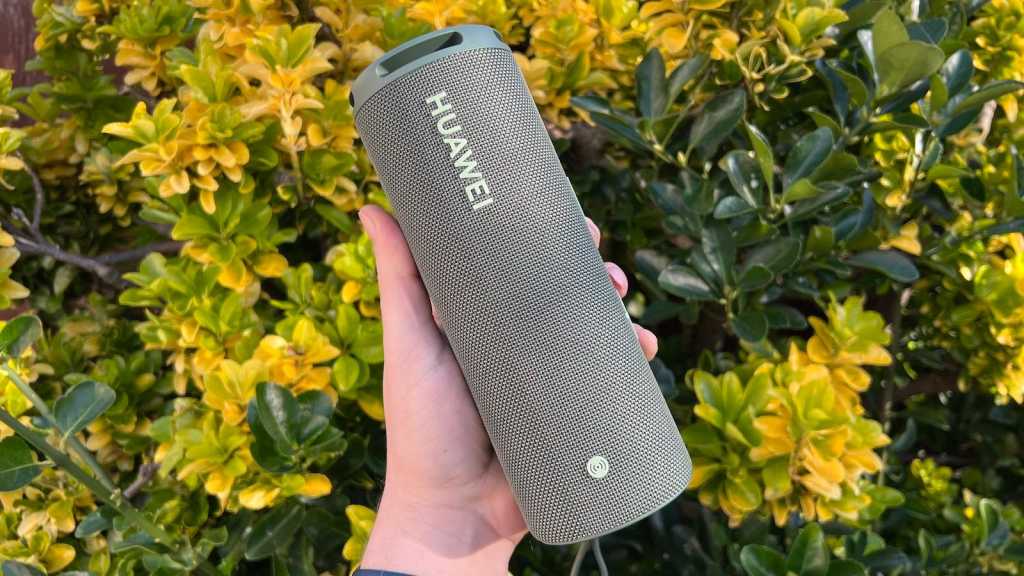 The Huawei Sound Joy is an exceptional speaker with impressive build quality and great audio performance, but some limitations to its smarts – especially with iOS devices – may put some off.

Huawei is continuing its relationship with high-end audio specialist Devialet with the Huawei Sound Joy, the first portable Bluetooth speaker in the collection. While the speaker is much smaller than the Huawei Sound and Sound X, it still manages to pack a punch – and it looks good doing it too.

The question is, does it offer enough to compete against established Bluetooth speakers like the UE Boom 3? After jamming out to tunes for over a week, here’s what I think about the Huawei Sound Joy.

Sporting a cylindrical shape, Huawei’s portable Sound Joy speaker doesn’t look all that different to the raft of competing Bluetooth speakers on the market – until you get a little closer and look at the finer details, that is.

Measuring in at 202 x 73mm, it’s easily slipped into a rucksack and comfortably fits into a bike bottle holder too, and although it’s weighty at 680g, it adds to the overall premium feel of the speaker. It does come with a wrist strap to give it extra security when carried around, and that can also be used to hang the speaker on a hook to keep it out of the way. 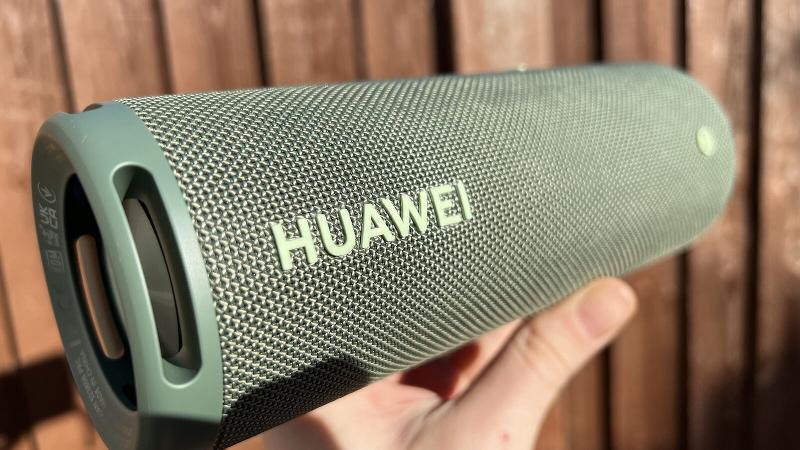 The speaker is clad in a tightly woven textured material that helps provide the IP67 water and dust resistance on offer, flanked by colour-matched plastic rims at each end. It’s available in two colour options, Obsidian Black and Spruce Green, with the latter supplied for review – the better-looking of the two in our opinion.

The speaker is arguably at its best when it’s sat vertically, but rubberised feet on the body of the speaker provide the perfect angle when laid horizontally, matching the rubber media controls that sit nearby.

While rubber buttons can often feel cheap in use, the satisfying click feedback from the mechanism within provides peace of mind that your press has been registered. The buttons are also backlit, further adding to the overall high-end look of the speaker. The volume controls are found separately, with buttons controls making them easier to locate. 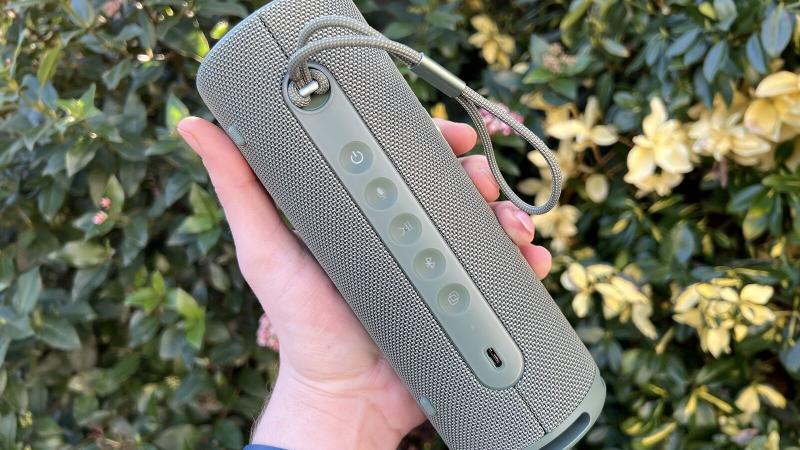 The speakers’ passive radiators, sat at either end of the speaker, are a highlight of Huawei’s design. Sporting Devialet branding, the radiators have a noticeable wobble and punch that makes playing bass-heavy tracks a particular treat – it’s the little things, after all.

One of the passive radiators is surrounded by a colourful LED ring that can be used to display volume levels as you adjust, battery level and much more – but you’ll need Huawei’s AI Life app to access the coolest feature.

Accessible via the app, you can enable a colourful effect that’ll glow and pulse to the sound of music. The problem? Though the AI Life is available on iOS, the Sound Joy is currently unsupported, making the feature exclusive to Android users for now. 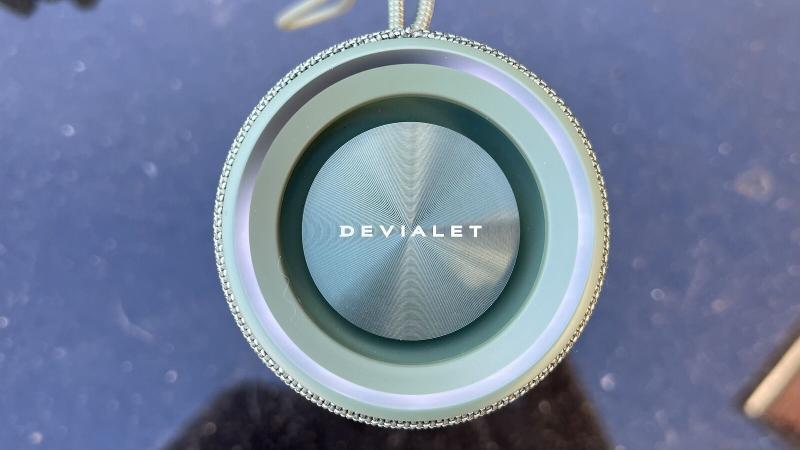 It’s a little disappointing that you can’t enable the light effects using speaker buttons, but hopefully the app will be updated soon enough.

The Sound Joy connects exclusively via Bluetooth 5.2 with no optional 3.5mm connectivity, but that should be fine for the vast majority of users.

There’s a built-in NFC chip that enables one-touch pairing technology that works well with most Android smartphones, and there’s an Auto-Discovery feature that’ll trigger a prompt to pair on supported phones, laptops and tablets when nearby, but that doesn’t include Apple devices. It still pairs within seconds on an iPhone or iPad, but you’ll have to do so manually.

Unlike some speakers, the Sound Joy won’t reconnect to the last-paired device when powering on, which can be a help or a hindrance depending on how you use the speaker. I’d prefer something that automatically connects because I’m usually playing from the same device, but I can see how it’d be helpful if you share the speaker with friends.

Though the dedicated mic button on the speaker suggests the Sound Joy has a hidden virtual assistant, that’s not the case. 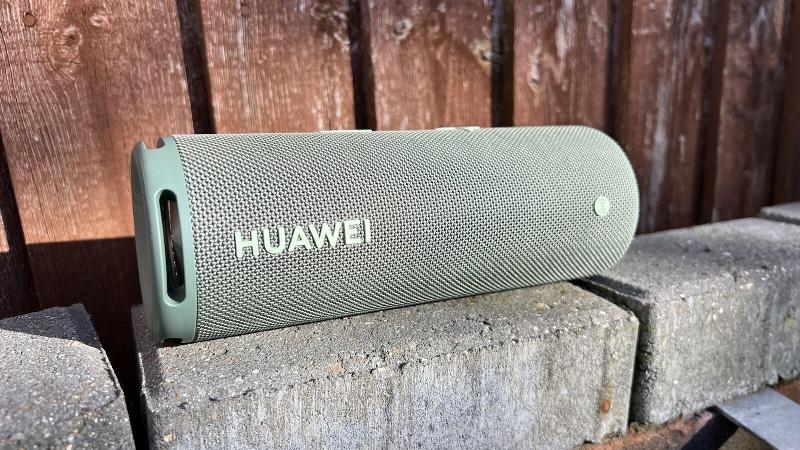 Instead, you can use the button to summon the virtual assistant of choice on your connected smartphone, working with Google Assistant and Alexa on Android as well as Siri on an iPhone. Combined with three onboard mics, you can change the song or even take calls without picking up your smartphone.

While there is an accompanying app for Android devices, it’s surprisingly limited compared to similarly priced speakers like the UE Boom 3, lacking even basic features like a custom EQ. The only real reason to use the app is to enable the beat-matching LED ring show mentioned earlier, or to choose between one of three audio presets.

Battery life is respectable, with an 8,800mAh battery housed within that Huawei claims can last up to 26 hours of playback – a claim that I’ve found rings true, although I imagine that’ll depend on volume, function, LED lighting and other factors.

Still, with 40W fast charge support, you can get an hour’s playback from 10 minutes of charging. The catch? There’s no charger in the box, just a USB-C cable.

So, how does the Huawei Sound Joy sound once it’s connected and ready to go? Impressive, but with Devialet speaker technology on offer, did you really expect anything different?

The Sound Joy features a Devialet co-designed speaker system, comprised of a 20W full-frequency speaker, a 10W tweeter and dual passive radiators using the company’s signature push-push design, along with its SAM technology. 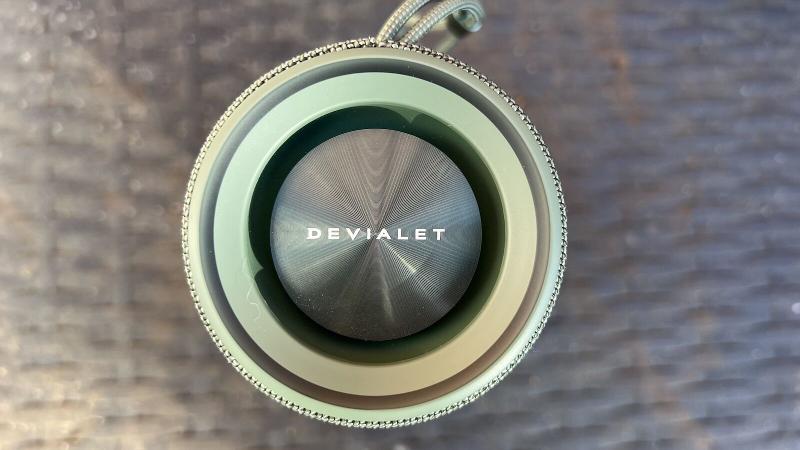 The end result of all that is an impressive audio performance that sounds like it should be coming from something double the size – especially in the bass department.

The bass performance really is exceptional for such a small speaker, with a powerful low-frequency presence that gives tracks a warm, punchy sound. That’s not to say it overpowers the mids and highs though; the combination of a full-frequency speaker and dedicated tweeter allows for plenty of detail that makes for a versatile speaker.

It sounds just as good listening to acoustic tracks as it is listening to Dubstep, although the bass capabilities lend itself better to the latter than the former. Just don’t listen to it too high; at close to its maximum volume, we found that the high-end can be a bit too sharp.

The only real complaint is the speaker placement; though it looks like a 360-degree speaker, it’s anything but, with orientation – especially when laid horizontally – playing a big part in how the speaker sounds. If you find the sweet spot in front of the speakers then it’s excellent, but it’s not projecting that quality in all directions. 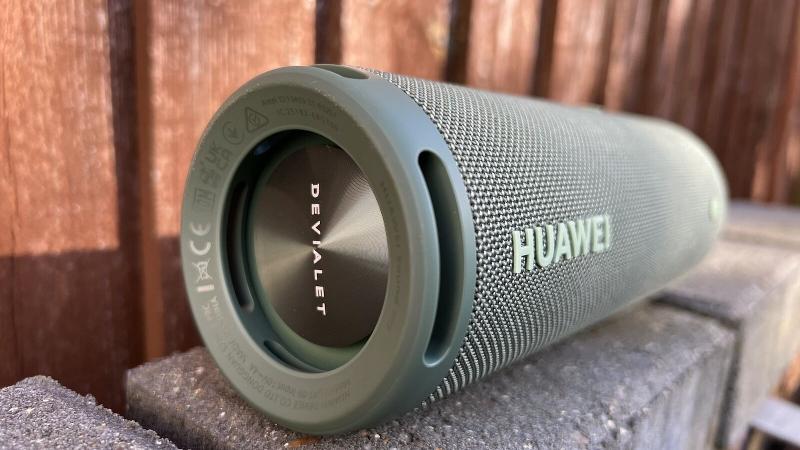 If you really want to widen the soundscape, you’ve got the option to double up on speakers – a process that requires you to press a button on the speaker or simply shake the devices at the same time.

Unfortunately I was only provided with one speaker for review so I can’t comment on how it performs, but it’s handy if you want to use them for music at larger gatherings.

Considering the audio performance on offer, the Huawei Sound Joy comes in at a tempting £129.99 in the UK, putting it in line with the ever-popular UE Boom 3. It’s available exclusively from Huawei in the UK for now, and unsurprisingly, there are no plans to bring it to the US at the time of writing.

The Huawei Sound Joy speaker ticks a lot of boxes: it’s stylish and made from premium materials, there’s great battery life on offer and crucially, it sounds impressive with powerful bass that doesn’t overpower the high-end. Plus, it’s always cool to see those passive radiators wobbling and kicking – a novelty I won’t be getting over anytime soon.

However, when compared with the wider portable Bluetooth speaker market – a market that’s very competitive – the Sound Joy starts to lose some of its pizzazz. It doesn’t offer 3.5mm headphone connectivity, the app is lacking basic functionality like a custom EQ and some fairly important smart features simply aren’t available on Apple devices.

If it’s purely audio performance you’re after then the Sound Joy remains a great option, but there are smarter Bluetooth speakers on the market at a similar price.